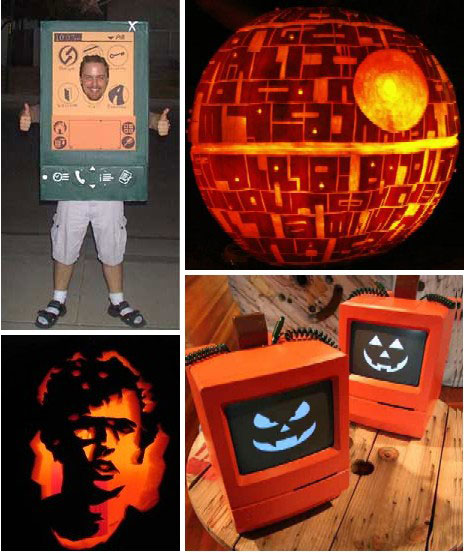 Halloween has come around once more and geeks worldwide are rousing themselves from their basements and consoles to enjoy the best Friday the 31st has to offer. It takes a lot to scare, excite or even impress a geek, however… geeky Halloween pumpkins and costumes don’t just have to be good, they’ve got to be BLOODY great! 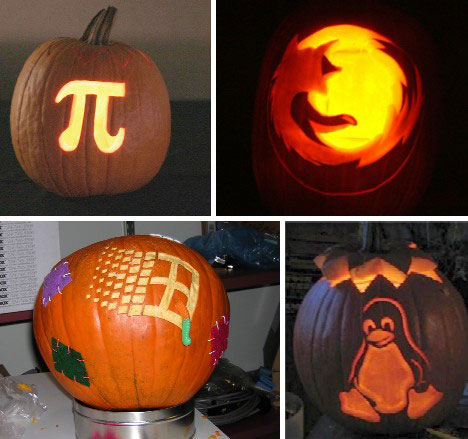 Geeks come in all shapes, sizes, sexes and sub-genres, but computer geeks are probably the most well known. The skull, er, skill-fully carved pumpkins above cater to the tastes of classic computer geeks with (clockwise from above left) Pi, Firefox, Linux and Windows. Note that the Windows pumpkin features a few security patches that haven’t stopped worms from appearing. At least we can be thankful they DO work against Trojans. 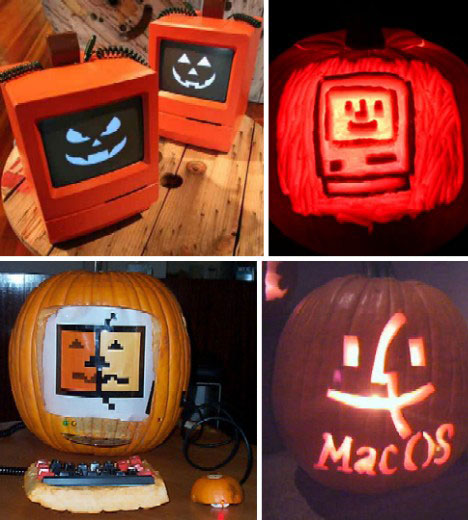 Mommas don’t let your Apples grow up to be pumpkins… unless you’re a Mac user. The quartet of Mac pumpkins above display various degrees of expertise, much like actual Mac users. 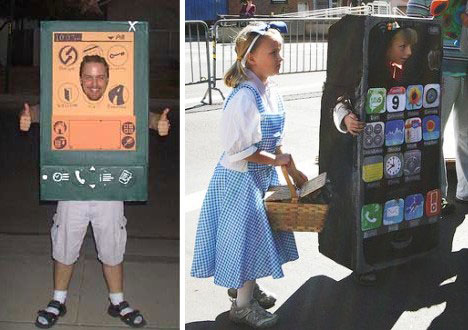 (image via: ForeverGeek and iPhone Matters)

Once the sun sets and trick-or-treaters begin to make their rounds, geeks may feel reluctant to leave their work- or play-station. Wearing a comp costume eases the pain of separation. Even so, you can take a geek out of the basement but you can’t take the geekiness out of the geek – as in the socks & sandals style of the Human Palm above left. The Human iPhone on the right at least has an excuse for wearing this literally over-the-top costume – he’s a kid. 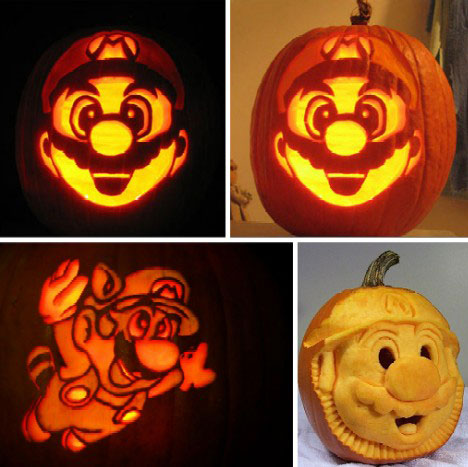 (image via: Technabob, Kotaku and GayGamer)

From computers to computer games, and our number one gaming character, Mario! It helps potential pumpkin carvers that Mario is cartoonishly drawn to begin with. Even so, the Mario pumpkin carvers whose work is shown above definitely have their game on. 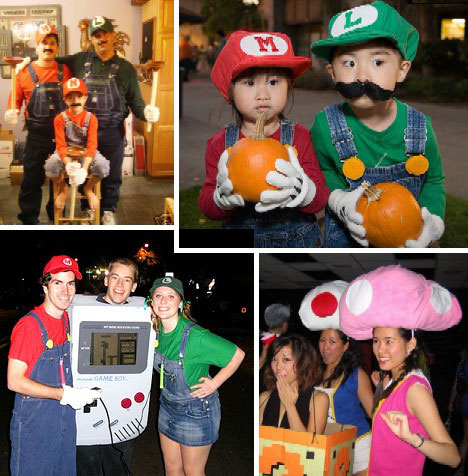 Mario costumes are an annual favorite as well, though some get a little too deep into the game. That means you, Game Boy Boy! 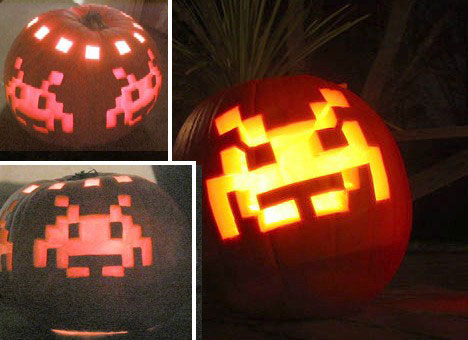 (image via: Kotaku and MikeWebkist)

Space Invaders is another classic arcade game that, thanks to its clunky big-pixel design, lends itself to geeky pumpkin carvers intent on recapturing their mis-spent youth. 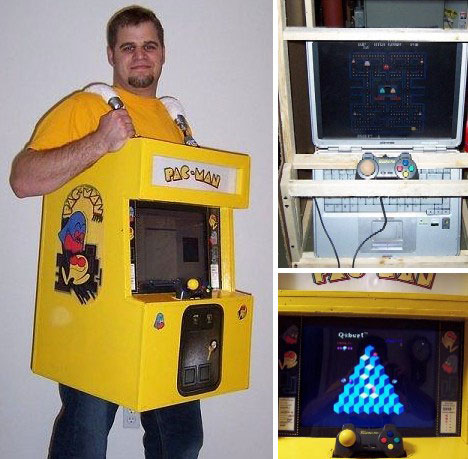 Speaking of arcade games, they make great Halloween costumes. The theme that is, not the actual arcade game itself… well, too late. Give the guy above props for building a working laptop into his Pacman costume so that other games such as Q-Bert can be played. Er, easy on the joystick please. 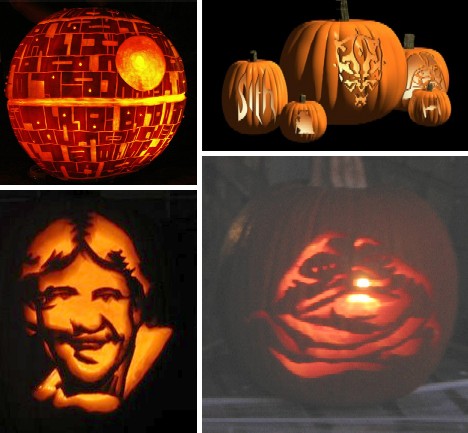 Geeks also love sci-fi, maybe even more than games & gaming. Not just ANY sci-fi either – Star Wars is the focus of legions of ubergeeks. The selection of Star Wars pumpkins above is highlighted by Jabba the Hutt and one very mean Death Star. 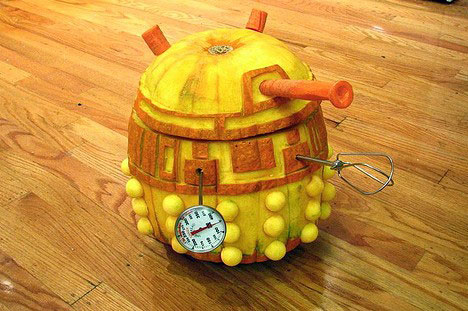 Let’s not leave out Brit-geeks and their fave obsession, Doctor Who. The Dalek pumpkin above doesn’t look all that scary, but it does excel in geekiness as the constructor has outfitted it with a rotating turret top and drive wheels. Pop in an MP3 player and you’re set to “Exterminate!” the neighborhood kiddies. 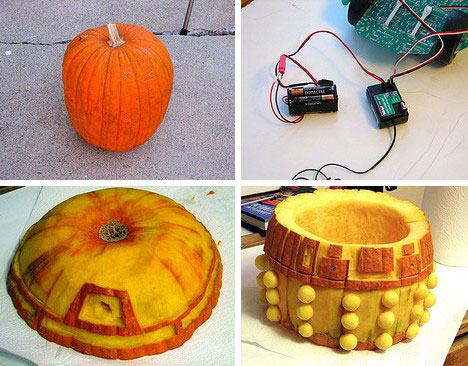 The four shots above show the evolution of a store-bought pumpkin into a dastardly Dalek, while the video below shows the finished creation in action as it invades the builder’s kitchen floor. 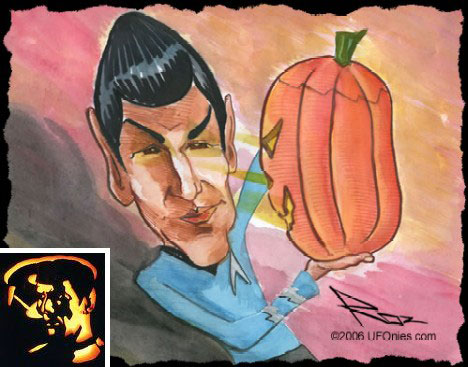 (image via: Ufonies and Dan Coulter)

Star Trek also has its share of geek adoration – they don’t call ’em Trekkies for nothing – and the enterprising designers of the Dan Coulter”>Spock pumpkin above went to a lot of tribble (trouble, even) to get the fine details just right. It may not be logical, but that’s just how Halloween is. 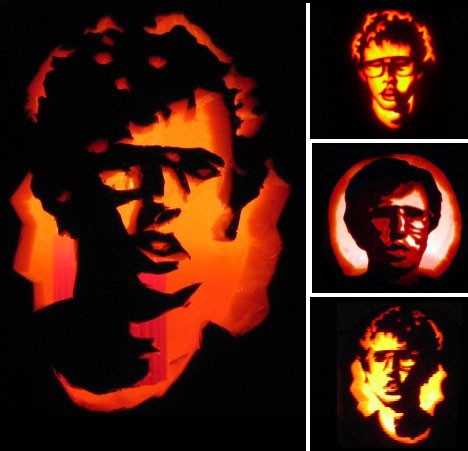 (image via: Xanga, Jake and Kenna and How Stuff Works)

To close, we honor not a subject of geek interest but an interesting geek: Napoleon Dynamite! One would need some sweet pumpkin-carving skills indeed to create the designs shown above. Maybe they used nun-chucks. 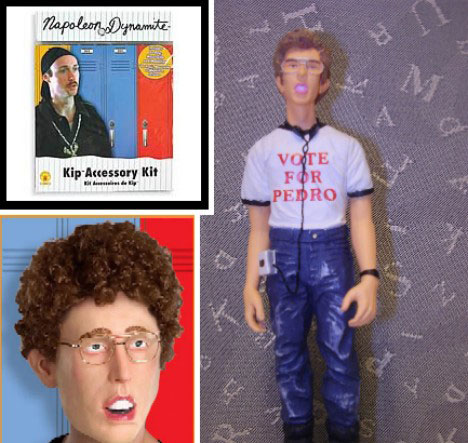 (image via: Entertainment Earth, WORD and Extras For Moviess)

Trick-or-treaters too have taken to dressing up as Napoleon – Dynamite, not Bonaparte – but you really have to be a movie geek to get the Kip Accessory Kit and go out as Napoleon’s suddenly streetwise brother. The same company makes a Pedro accessory kit consisting of a wig, a mustache and a bolo tie. You provide the accent. Sweet! 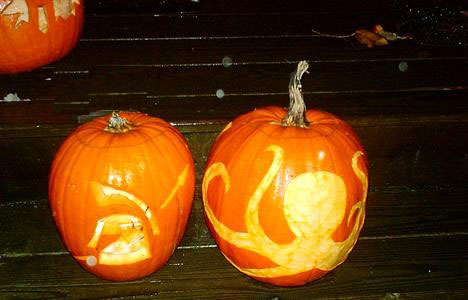 And that wraps up Geek Halloween (Did you mean: greek halloween) for another year. Hmm, “greek halloween”… wonder what Google is hinting at?