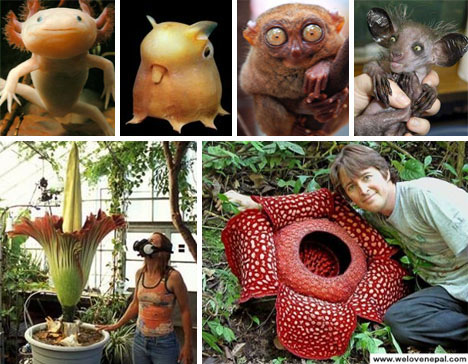 WebEcoist has showcased some of the most strange and amazing plant and animal species in the world – highlighting the most beautiful, terrifying and mind-boggling sides of Mother Nature. The plants range from deadly to healing and from exotic to endangered and the creatures include everything from endangered species and deadly animal assassins to astonishing camouflage and self-defense mechanisms.

42 of the World’s Most Exotic Animal Species

These four awesome articles document some of the rarest and deadliest creatures on the planet, from unassuming predators to cute-but-poisonous animals as well as spectacular examples of natural camouflage.

20 of the World’s Weirdest Endangered Species: Let’s skip the cute pandas and tragic polar bears this time and go for the poison-slinging mammals, bee-sized bats and inflate-a-face seals.

10 of the Strangest Animal Self-Defense Mechanisms: How about a frog that breaks its own legs to whip out wolverine-style claws, a suicide-bombing ant or a beetle that shoots boiling water?

6 Extraordinary Examples of Animal Camouflage: Some animal camouflage is what we all know and love – the little bug that looks like a leaf – but some creatures can entirely change colors and even patterns.

Bonus – 32 Exotic Endangered Mammals, Fish, Birds, Reptiles and Amphibians: There are many exotic animals in the world but some of these are critically threatened and may disappear soon.

70 of the World’s Most Incredible Plant Species

These four creative collections feature images and information on some of the most unusual plants you may never have seen, including ones that can kill you in a heartbeat or heal you almost as quickly.

16 of the World’s Weirdest Endangered Trees, Plants and Flowers: The most amazing and offbeat plant-life on the planet – but also some of the most endangered so see them now while they still exist.

16 of the Most Unassuming but Deadly Poisonous Plants: Fast and lethal but often deceiving, these killer plants are not always what they seem – their danger often lurks behind a beautiful facade.

18 of the Most Powerful Medicinal Plants on the Planet: Some of these plants are outlawed because of powerful non-medical effects while others are widely grown and harvested around the world.

20 Beautiful but Endangered Forests from Around the World: Rain forests are by far not the only ones in danger. Here are some incredible forests well worth visiting and saving before they disappear.

Bonus – 10 Exotic but Entirely Edible Fruits and Vegetables: The above lists may or may not have left you hungry for more. This one is also tough to call – how brave are you when it comes to eating?

All this talk of amazing and exotic animals and plants will have certainly left some people hungry and others rushing to change their dietary preferences (not to mention travel plans) altogether. You choose:

20 Delicious Vegan Meals and Recipes: Whether you want food that still tastes like meat or something entirely different there is a yummy vegan delight on this list sure to tickle your taste buds.

20 Delicious Vegan Appetizers and Desserts: From salads, bruschettas and fries to cookies, brownies and pies here are some mouth-watering vegan appetizers and desserts – essential ingredients for any meal.

14 Cheap, Easy and Delicious Vegetarian Meals and Recipes: Not sure you are ready to take the plunge and remove milk and eggs from your meals? These recipes are great even for hopeless non-cooks.

12 Tips and Recipes for Making Sustainable Meat Meals: So some of us may not even be able to make it as far as vegetarian – but don’t despair: there are some ways to go greener even if you want to stick to meat.

Bonus – 10 Green and Eco-Friendly Mixed Drinks and Cocktail Recipes: Going green when it comes to consumption isn’t just about food anymore – you can sustainably intoxicate yourself as well.

New to WebEcoist – the WebUrbanist Green Sister Site? Now is a great time to check it out and to sign up for the RSS feed so you won’t miss any great green information, extreme environmental oddities and natural wonders of the world. Take a look and thanks for reading!