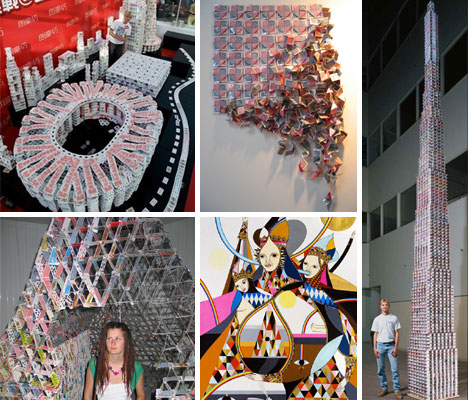 Some art is not made to last, and such is the case with playing card sculptures that seemingly defy the laws of physics. Carefully stacking playing cards to form a structure is difficult enough when you’ve got a modest goal, but some playing card art masters can build entire villages including buildings that reach an amazing 25 feet into the air. Playing cards also appear as a theme or a medium in works by a variety of artists, from painters to the architects of the always-creative structures at Burning Man. 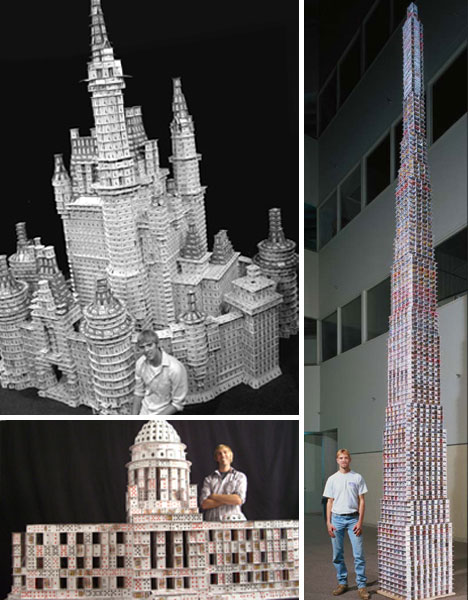 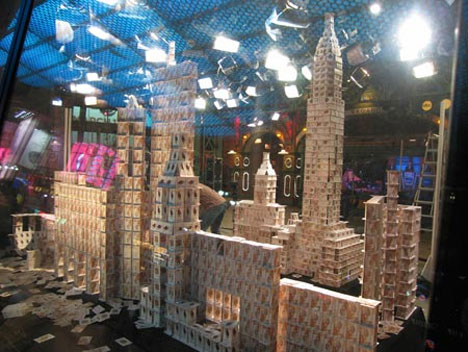 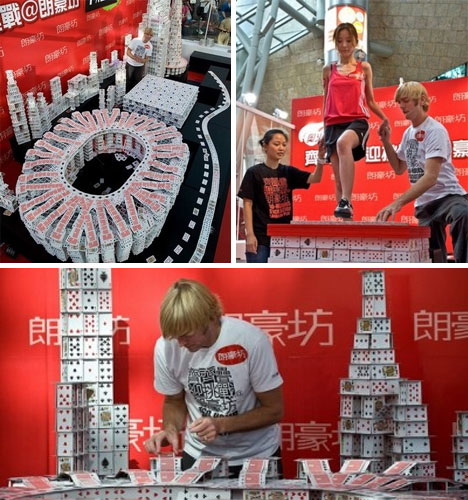 Brian Berg is the undisputed master of playing card sculpture. He creates massive structures simply by expertly stacking playing cards – never bending, gluing, folding, taping or otherwise manipulating the cards to achieve these amazing effects. Brian, an architect, experimented for years to come up with his methods and explains that with so many cards in large constructions, the combined weight of all the cards adds to the stability of the structure. The weight is supported by the strategic arrangement of cards in grid patterns, with the cards keeping each other from bending or falling over.

Berg broke his own previous Guinness World Record of 14 feet when he built the world’s largest house of cards in 2004, standing over 25 feet tall. In 2008 he built a replica of Beijing’s Olympic Village in 20 days with 140,000 playing cards. The images above show his Disney castle, a replica of the Capitol building, one of his record-breaking towers, a replica of the New York City skyline and the Olympic village. 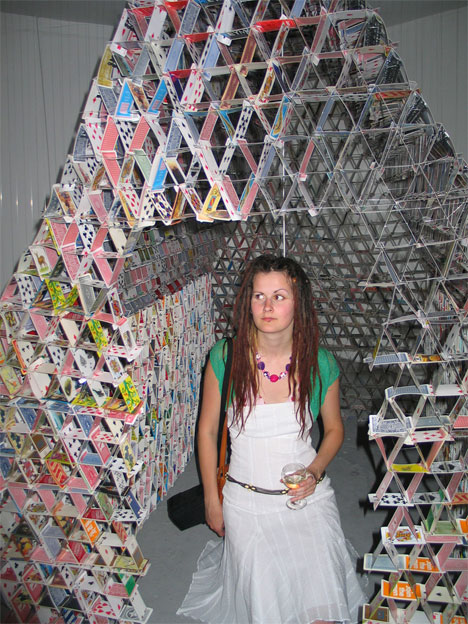 We’re not sure which artist created this house of cards at the 2006 Leeds Metropolitan University Fine Art Degree Show, but it’s pretty impressive – you really have a good view in this photo of the way some of the cards seem to float on air. When viewing it, one almost gets the sense that the whole thing is going to crumble with a brush of this girl’s shoulder as she exits.

Floating Alligator Made of Playing Cards 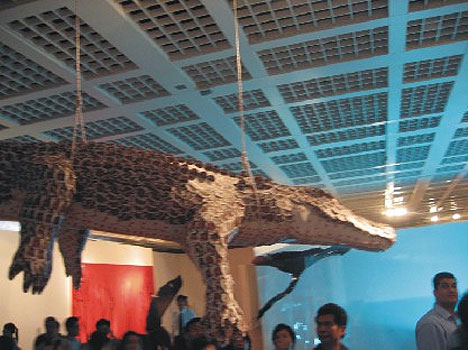 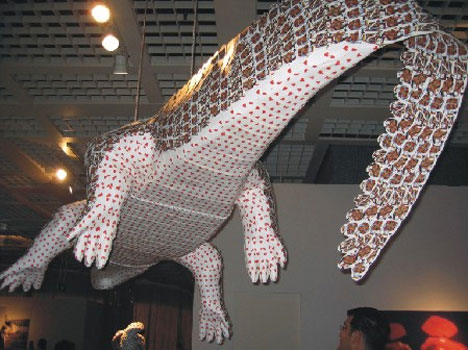 This alligator sculpture made of playing cards was spotted in Shanghai. It’s difficult to tell based on the photos whether the cards are interlaced or glued together, but check out how they’re curled to make up the fingers, and bent upward to create spines along the creature’s back. 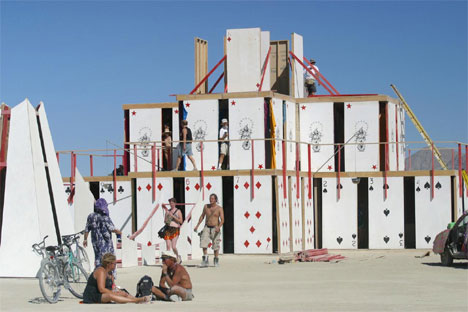 Leave it to the imaginative minds of Burning Man devotees to come up with this idea: a literal house of cards. Created by Lewis Zaumeyer, this building – otherwise known as ‘Temple of Chance’ – was burned, naturally, at the end of the 2003 festival. 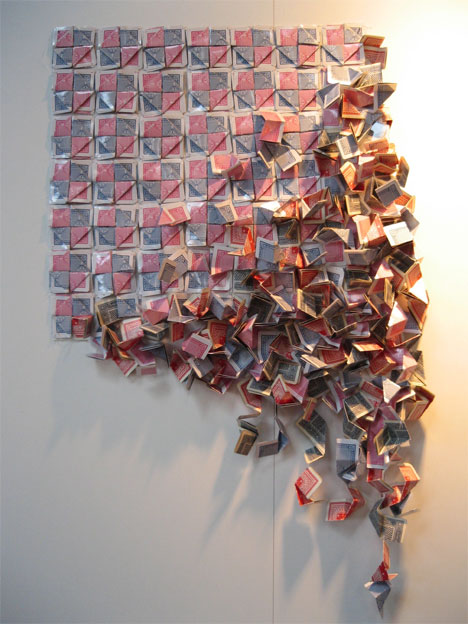 This piece by artist Lisa Curtis may be a bit more permanent than most playing card art, but it still appears to be dissolving before our eyes. Hundreds of folded playing cards carefully arranged on a wall begin to crumple and seemingly tumble down. Curtis uses everyday objects chosen for their appealing colors, interesting patterns, textures and nostalgic qualities to demonstrate that it’s possible to reuse in order to recreate. 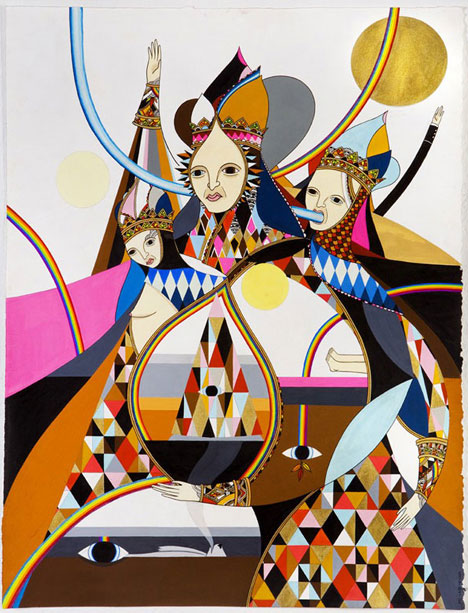 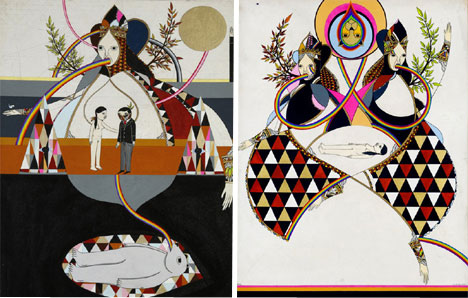 The Queen got a colorful, surrealistic makeover in the paintings displayed at Richard Colman’s 2007 solo show at the White Walls gallery in San Francisco. It’s like a jumble of playing card imagery as seen through the eyes of someone tripping on acid. Fascinating composition, vivid colors and certainly a unique representation of the figure seen on decks of cards across the world.