Cryptic ‘House of Hades’ linoleum tiles inspired by mysterious and anonymous Toynbee Tiles are cropping up on The Big Apple’s paved streets. 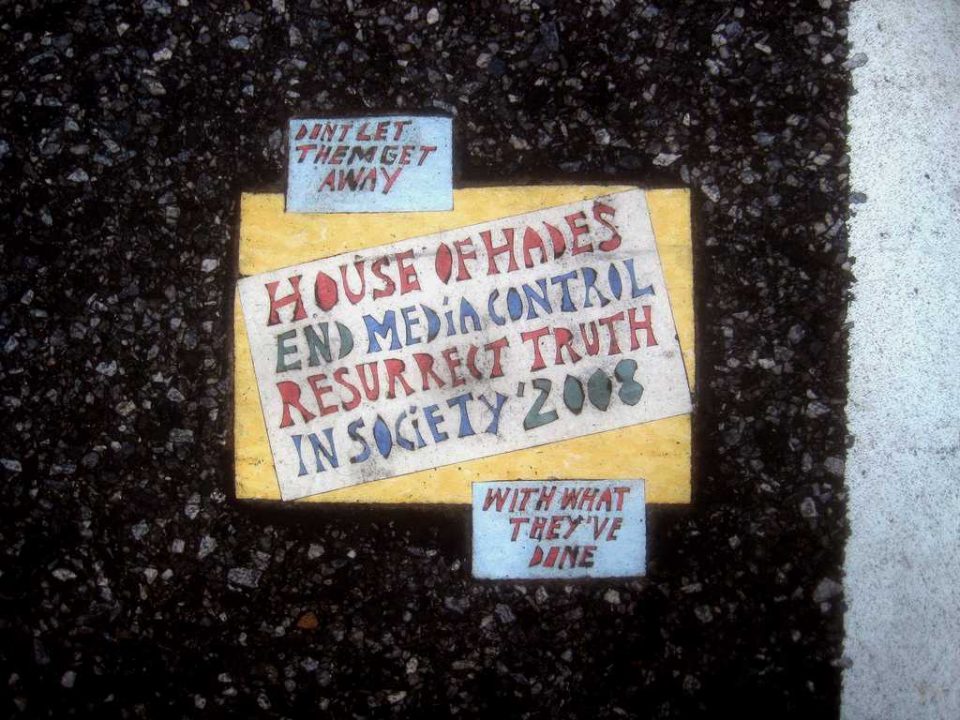 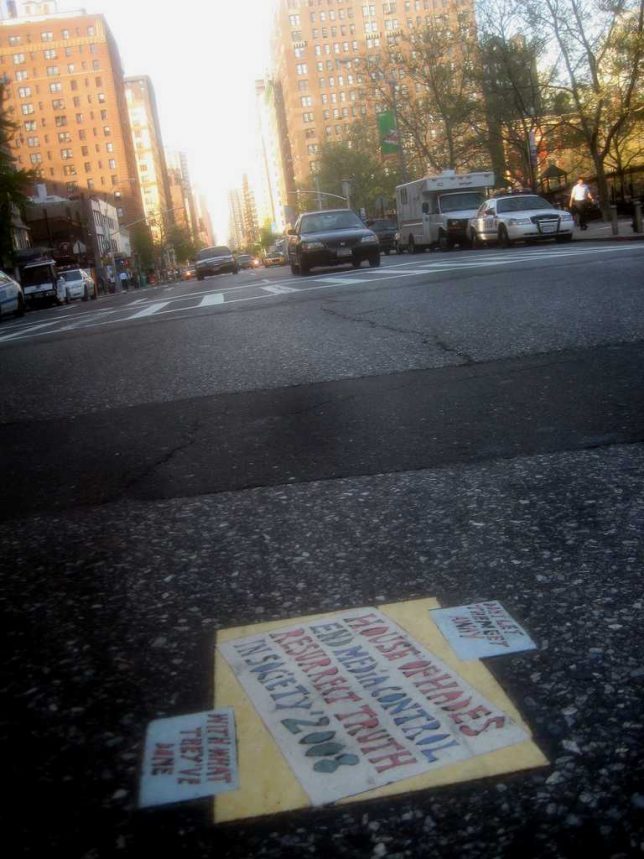 The so-called “Toynbee Tiles” are mosaic messages cut from colored linoleum floor tiles and ingeniously set into asphalt-paved urban streets. The tiles – made and installed by a still-anonymous person – began appearing decades ago in cities from the U.S. east coast west to Kansas and as far south as Santiago, Chile. Most of the original Toynbee Tiles have worn away and are preserved for posterity through photographs taken by aficionados such as Flickr member Brecht Bug, which describe new Toynbee Tiles placed as recently as 2016. 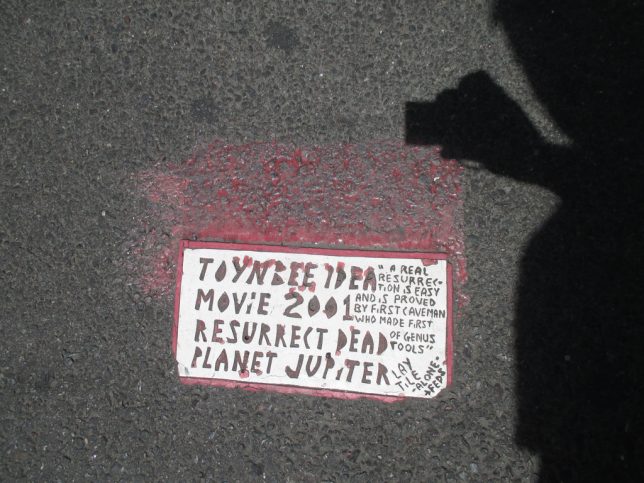 The artist’s carefully guarded anonymity has inspired at least one copycat who signs their work “House of Hades”. Besides not having to deal with copyright issues, copycats are able to stoke public interest in their own work by creating uncertainty in the public mind… is this a copy or a work of the original artist? House of Hades tiles greatly resemble the original Toynbee Tiles (example above) in style and construction though their inherent and obvious messages are quite different… and often quite weird. 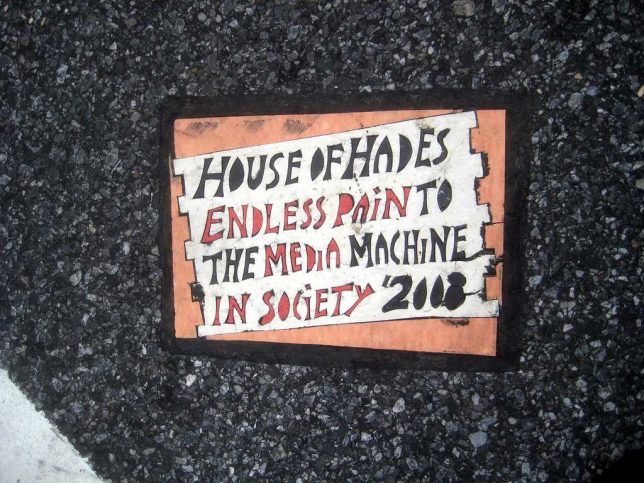 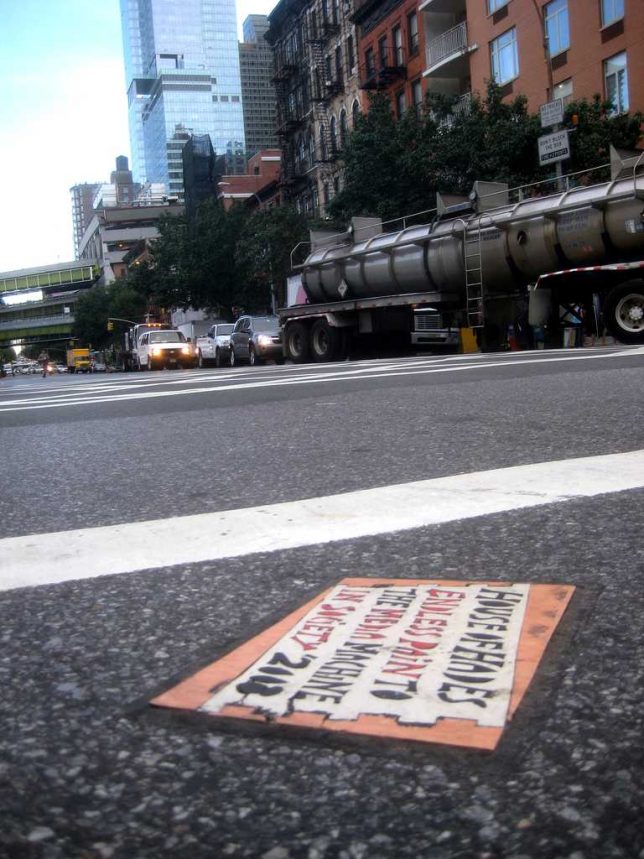 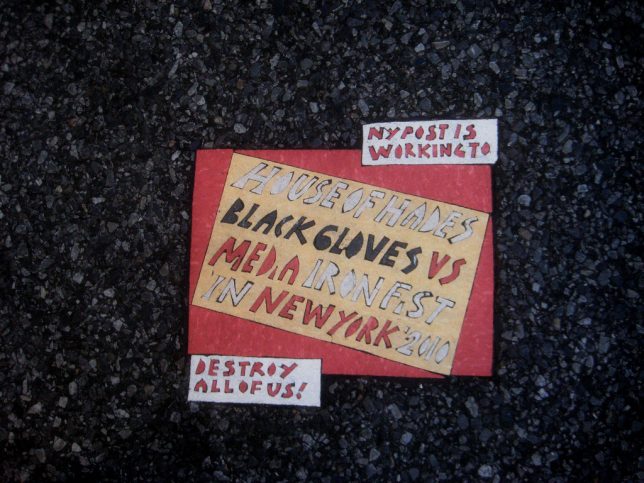 House of Hades’ most commonly expressed sentiment is a vitriolic hatred for the Mass Media – sometimes called out in person, i.e. the New York Post. He (or She – we’ll go with the male pronoun for the sake of flow) often refers to himself as “one man against the media machine”. The laying of these tiles seems to constitute a vengeful vendetta on one level; a warning to society on another. 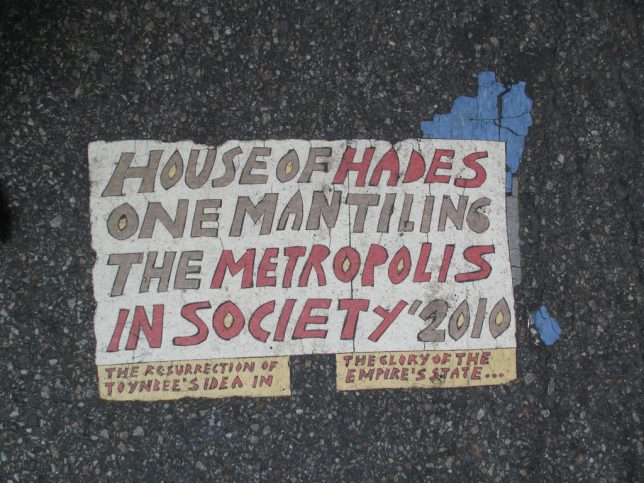 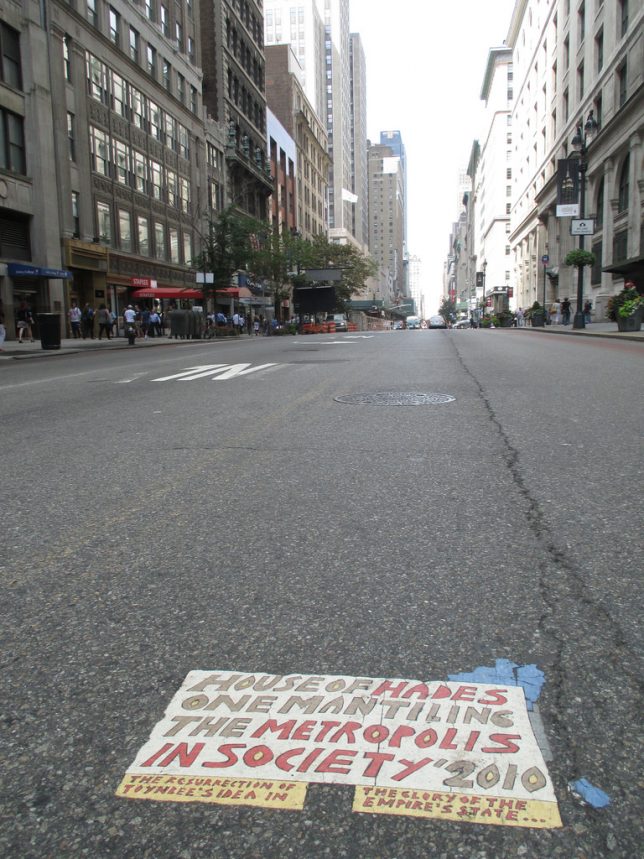 House of Hades tiles can be found from Buffalo, New York (where they may have originated) down through Pittsburgh and Philadelphia but they may be most common in New York City. Flickr member Brecht Bug has uploaded over 300 photos of NYC-area House of Hades tiles, often returning to the same tile to highlight the tiles as they gradually decay in the Big Apple’s punishing urban environment.

The Only Living Tile in New York 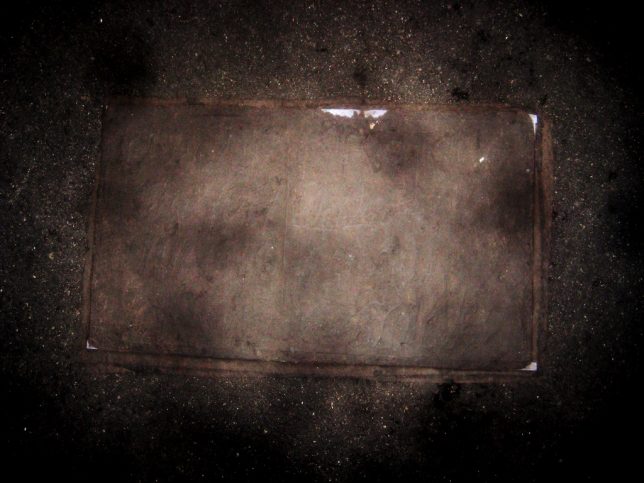 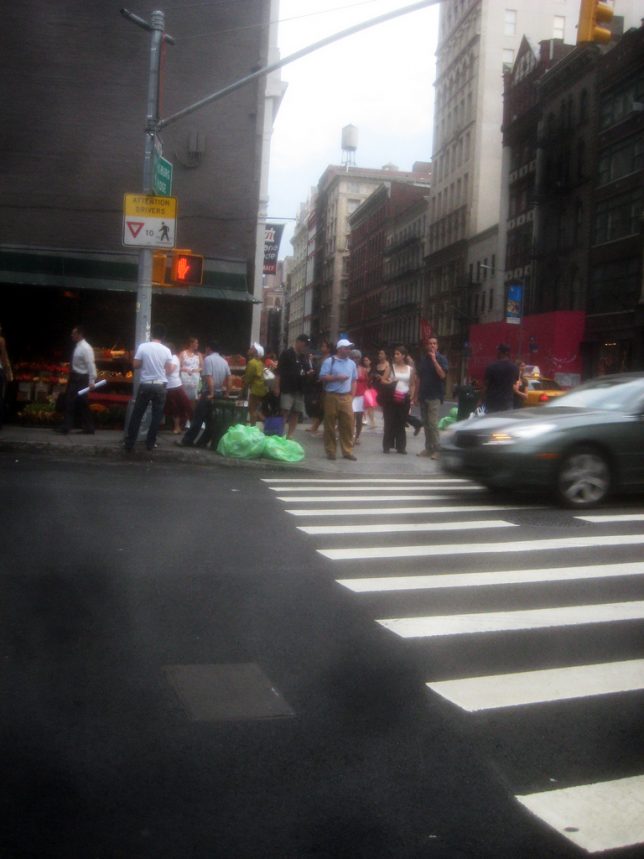 The tiles are not alive, of course, but they do have lifespans which vary depending upon their location, amount and type of traffic, and other such factors. In 2009, Brecht Bug was serendipitously fortunate to find a newly-installed House of Hades tile located near Broadway & Houston. The tile was so new, its tar paper cover was completely intact. 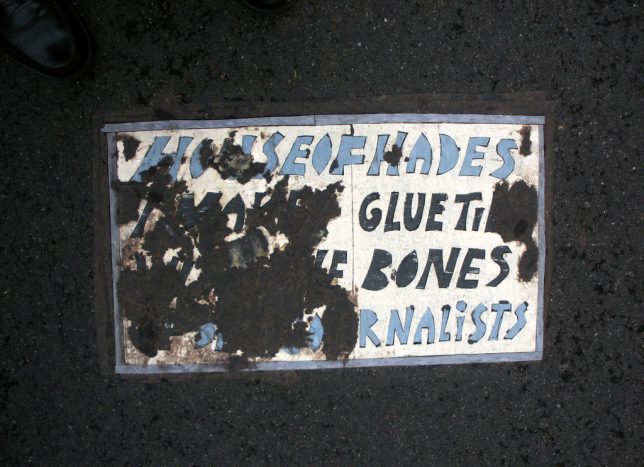 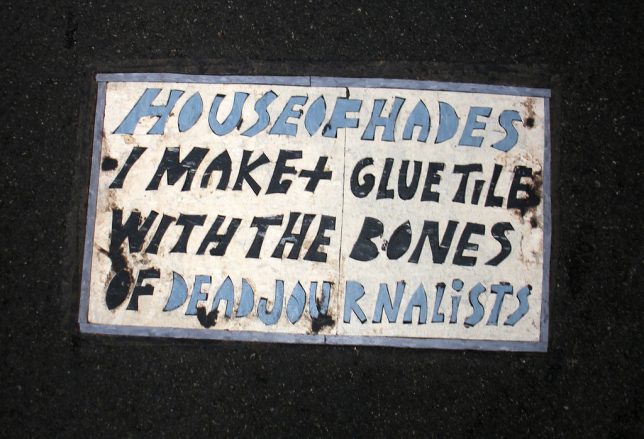 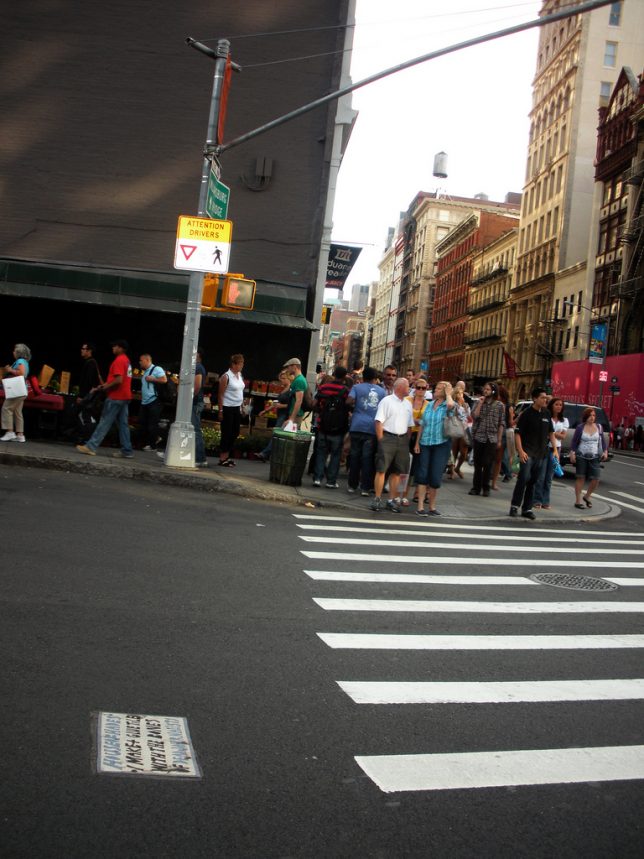 Like the original Toynbee Tiles, House of Hades tiles are made of cut linoleum set mosaic-style into a tar base, then covered with a thin sheet of tar paper. The cover protects and stabilizes the tile until solar heat and the weight exerted by passing traffic conspire to press the tile into the pavement. Ingenious… and that doesn’t even take into account how the artist performs installations in the middle of NYC’s infamously busy streets. 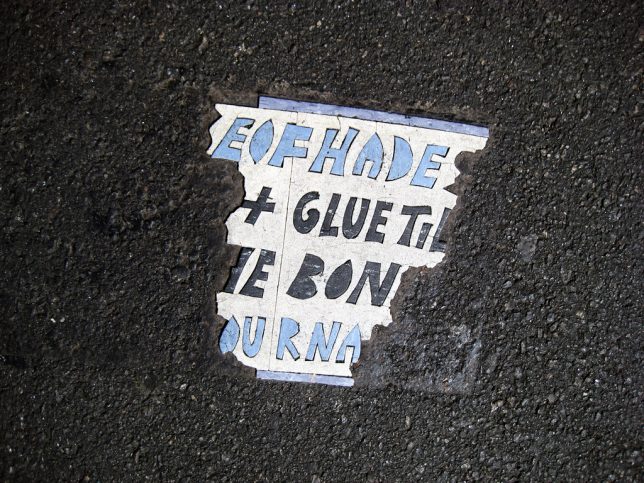 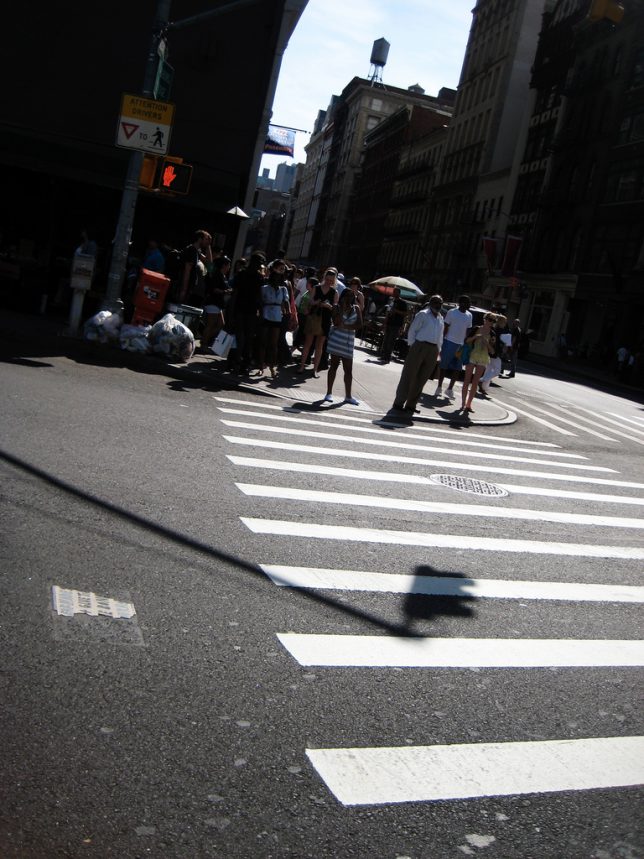 The photographer was able to snap the newly-laid tile on August 21st of 2009, four days later as the tar paper had partially worn off, fully exposed on September 1st, and yet again in early April of 2010 as the tile was crumbling away. It’s the Great Circle of Life, tile style!