Do you drive on a parkway and park on a driveway? These unusual painted driveways prove that when it comes to painted pavement, nobody’s really asphalt. 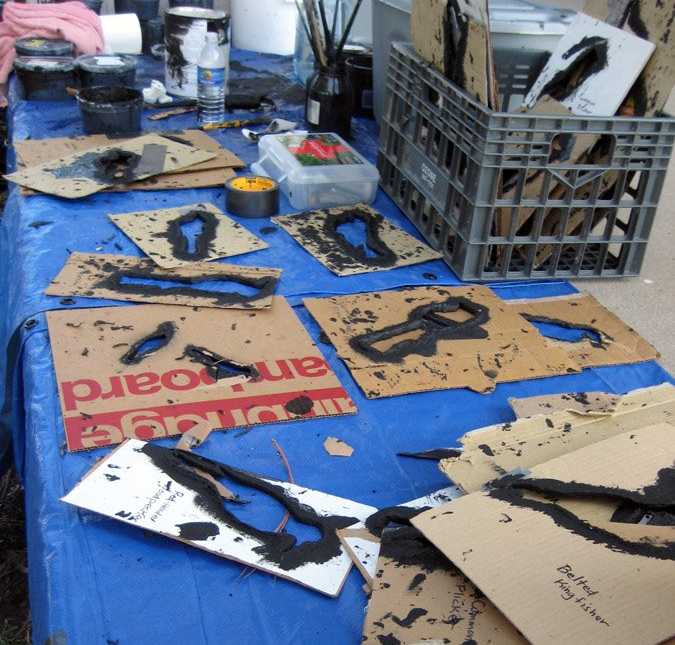 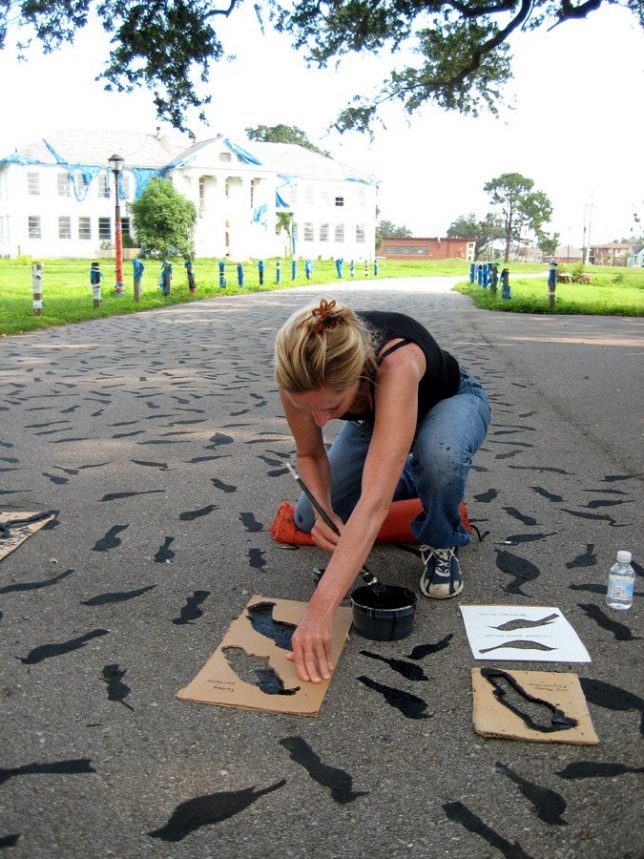 The Milne Boys Home in Gentilly, a neighborhood in New Orleans, LA was built in 1933 to house “orphans and troubled children” – an all too common social phenomenon in the Great Depression. Featuring a cluster of seven antebellum-style buildings, the facility closed in 1986 and was used only sporadically thereafter. Fast-forward to 2005 when Hurricane Katrina caused enough damage to make the campus completely unusable unless one was a squatter or drag-addict – or both.

In 2008, however, things began to change at the old Mllne Boys Home thanks to a multimillion-dollar injection of funding from the state, the city and FEMA. One of the site improvements concerned the campus’s winding driveway, contracted out to AORTA Projects. 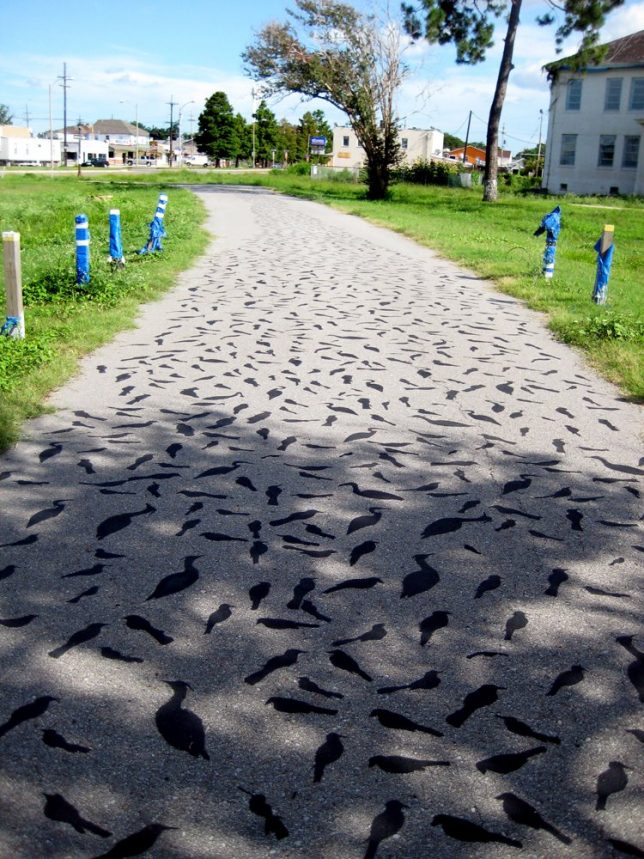 “With the help of a crew of approximately 20 volunteers,” explains lead artist Jacqueline Bishop, “I painted the asphalt driveway of the Milne Boys Home with approximately 5,000 simple black bird silhouettes that were individually cut from original drawings and applied with Industrial Zone and Marking paint. Considering there are approximately 460 bird species in Louisiana, we stenciled a variety of these species in an effort to celebrate and raise consciousness about our unique and fragile environment.”

Bishop titled the finished work “Field Guide”. “After experiencing the power of Katrina while sitting in my house, the most immediate, haunting memory after the storm was the deafening silence. There were no birds for ages. It seems appropriate that this project can bring attention to birds who in turn bring life to abandoned areas in post-K New Orleans.”

Tile Of The Century 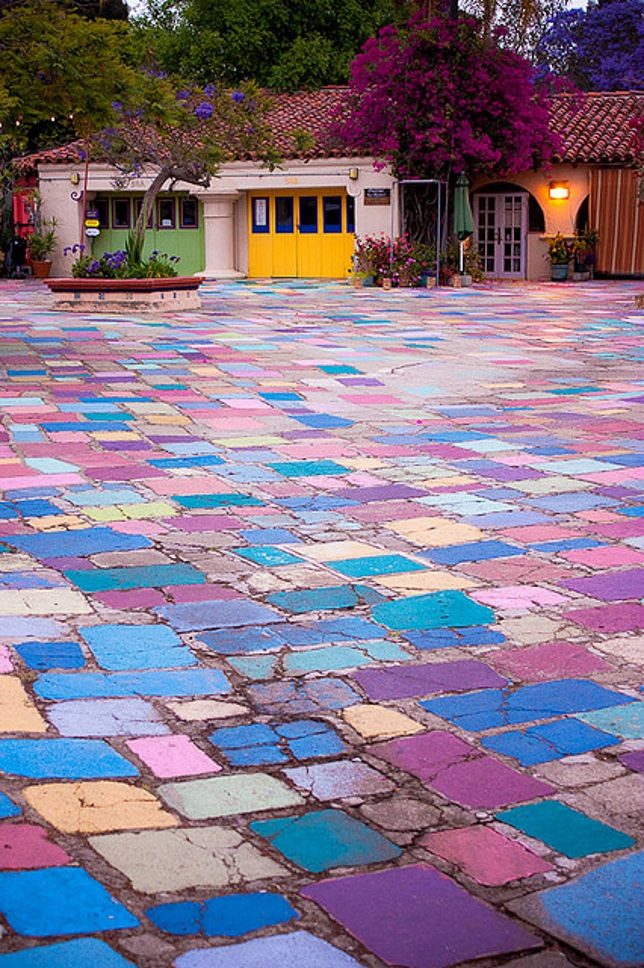 There’s not much we can tell you about the dazzling, impressionistic tiled driveway above, other than the fact it was photographed on April 1st of 2011… no foolin’! Kudos to Betty Broccoli of Betty’s Fashion Corner page at Tumblr for bringing some much-needed color into the gray monotony that is the pervue of far too many driveways. 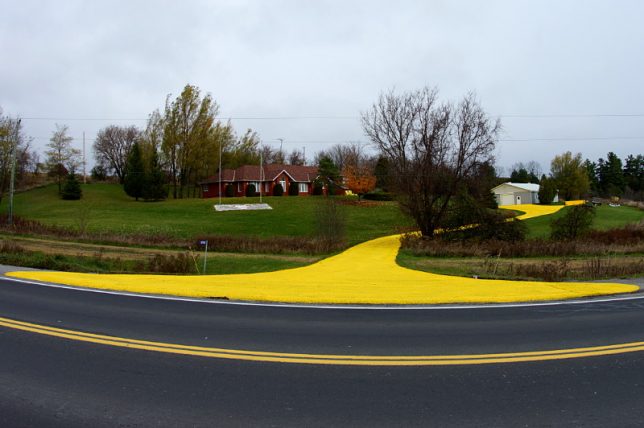 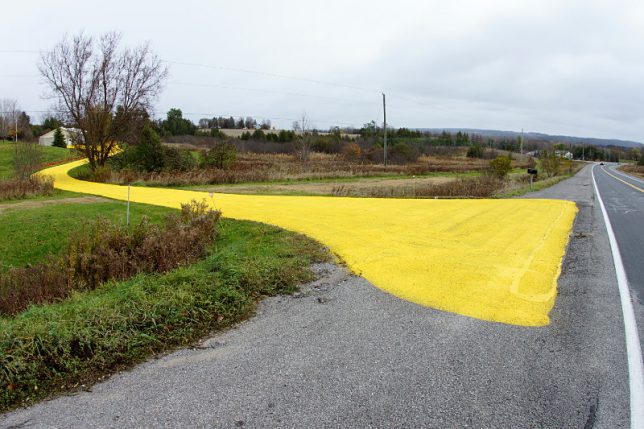 Alas, there’s no Emerald City at the end of this yellow brick, er, asphalt road though the homeowner must be a wizard of sorts. Located just off Hwy 28 in Bailieboro, north of Port Hope, Ontario, this “brilliant” idea makes a weird sort of sense being there aren’t any visible road signs in the vicinity, so this is one way to attract notice (and alert the pizza delivery guy). On the other hand, the lemon-yellow laneway leads not just TO the highway but oozes over a significant portion of the soft shoulder… Mr Wizard can expect a visit from the Wicked Witch, er, the local county mountie sometime soon. 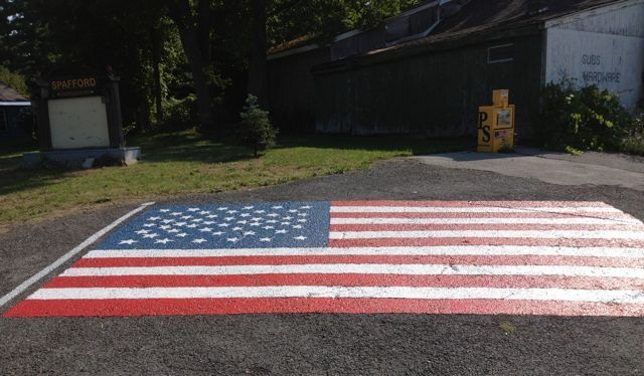 You’ll find this patriotic piece of roadwork in Spafford, NY, fronting a home at the intersection of routes 41 and 174. Something tells us the jacked pickup that probably gets parked here sports a Confederate flag on its rear window, because freedom.