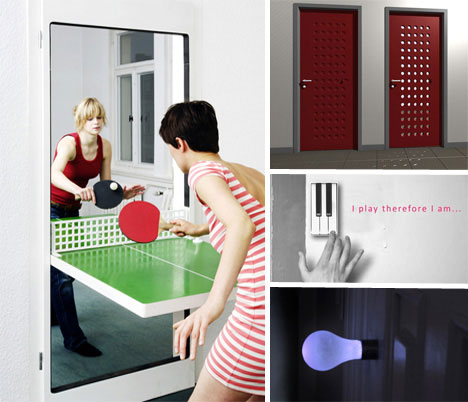 In our rush to renovate our dream house with the craziest and most creative that modern design can conjure up, we’re liable to forget how we enter and leave it. If you are thinking that modern door design is a matter of open-and-shut conventional thinking, these 14 examples should put you in the right frame of mind. 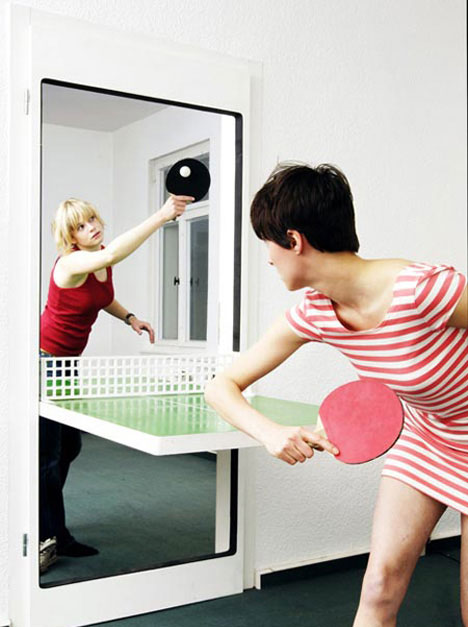 If ever a door was perfect for university student halls of residence, this is it. Once shut, the Ping Pong Door‘s middle section swings down into perhaps the most neighborly door you’ll ever own (if your neighbor likes ping pong, that is). Expect this concept to expand to encompass every tabletop game under the sun – air hockey next, please. 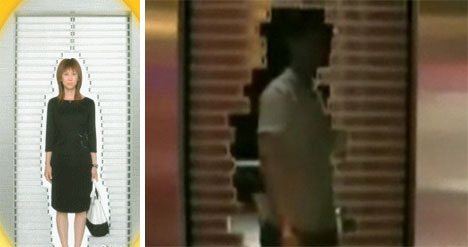 (Images via: Gizmodo and Tanaka)

In the future, all doors will automatically slide aside as we approaching (so says Star Trek, and who are we to argue?). However, here’s one that Gene Rodenberry didn’t see coming: a door that moulds to the shape of your body as you pass through it. The Tanaka Sliding Door is a crowd-pleaser (watch the reaction of the people in this video) and poses the fascinating question: do we really need our doors any bigger than we are? 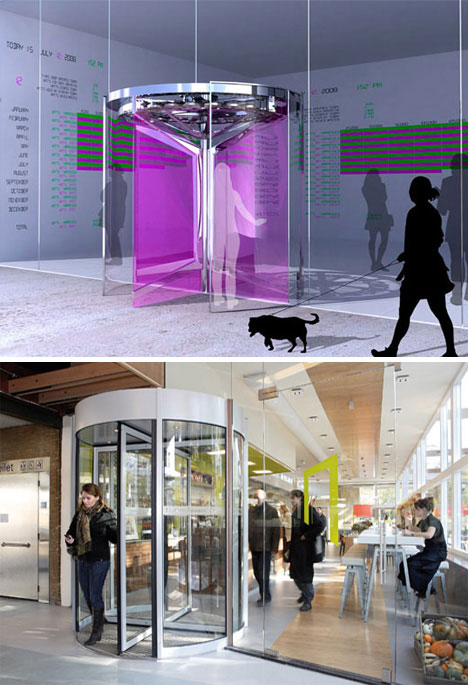 (Images via: Fluxxlab and Inhabitat)

The Wachowski brothers were right – human beings are sources of tappable energy. It may seem a decidely weird way to generate electricity, but the kinetic energy spent in pushing a door open can be diverted into potential in charging up a battery or feeding electricity back into a power supply. This is the principle behind Fluxxlab’s Revolution Door and the Natuurcafé La Port – and now this idea has become reality, it seems far from weird. 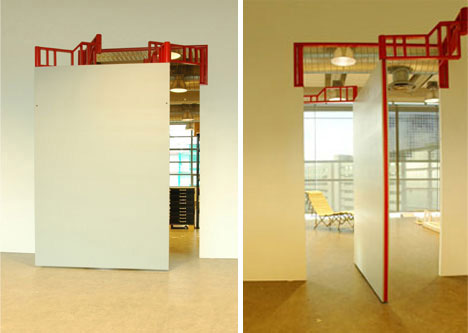 Interior designer Lotty Lindeman seems unimpressed with doors – and based on the above design, we sympathize. After all, when the walls swing open as fast as you can say “Open Sesame!“, where exactly do doors belong? 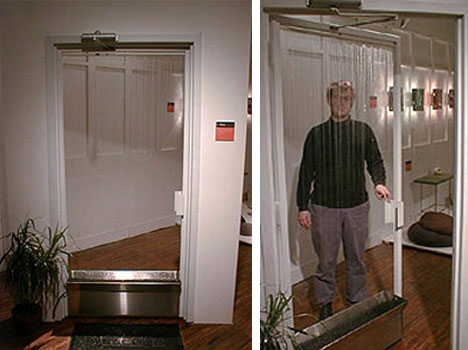 Now, exploring new doorway mediums is all very well – but is this daring or just a touch lunatic? The Waterfall Door is formed of a sheet of permanently cascading water that is collected in a trough and cycled round and round the frame. Designer Danial Harper seems to be aiming at the mesmerising vibe of standing behind a natural waterfall – but would you be happy with a thorough soaking everytime you leave the house? A bakingly hot climate seems a must for this one. 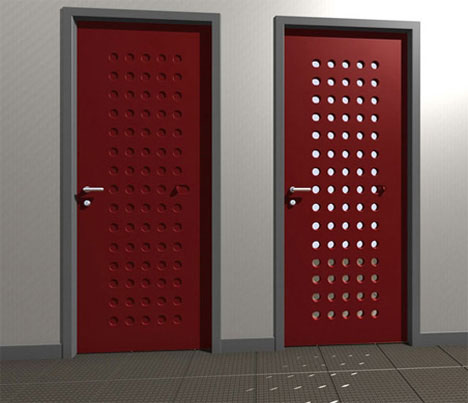 You value your privacy – but you want a nicely daylit room. The eternal dilemma, and not one that doors usually feature in.  Enter the Light + Air Door. At the pull of a latch, your door is suddenly as perforated as a teabag, allowing the big wide world to come streaming in. 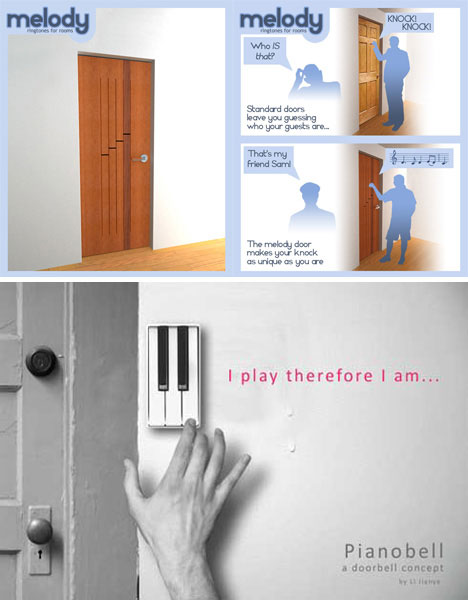 (Images via: Seven02Design and Designboom)

Who is at the door? That is a question these two designers never want to hear again. Dominic Muren’s award-winning Melody Door works like a vertical xylophone, allowing you to tap out your very own signature tune on a full octave of available notes. The Pianobell is designed for the less musically-minded, presenting a more familiar and accessible piano keyboard to recite your arrival. 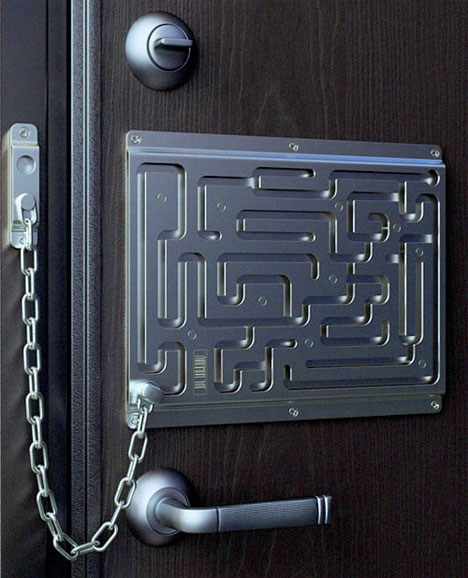 Fancy a challenge? If you’re not afraid of keeping visitors waiting, the Defendius door latch – which can safely be filed under “eyecatching” but maybe not so much under “practical” – is a key element to your dream door. Made of beautiful titanium alloy, this is ideal for letting door-to-door salesmen know what an inconvenience they are (and with a bit of luck, by the time you get the door open, they will have gone). 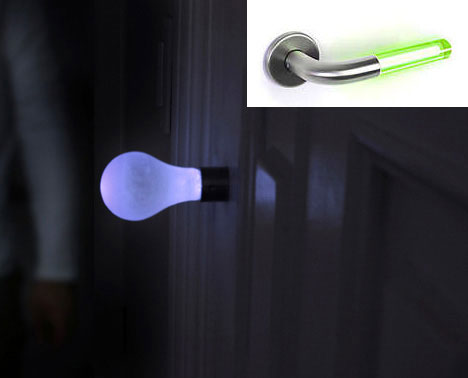 (Images via:  Designophony and Yanko Design)

There’s a particular indignity in fumbling for the light switch just so you can find the door. With a little 20-20 hindsight, the solution is obvious: light the door up. These glowing doornobs are a happy marriage of style and practicality: the Brighthandle adds a touch of lightsaber to the proceedings, while the Knobbly Light opts for a quirkier approach (and no, it won’t burn your hand). 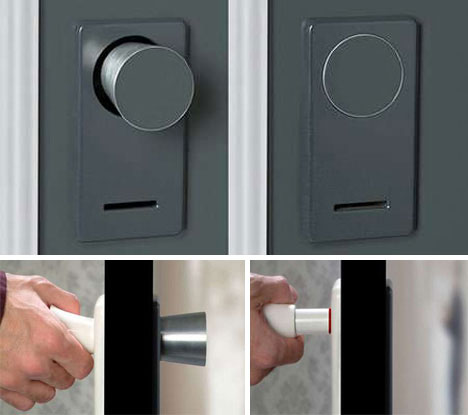 When work deadlines are pressing and the Do Not Disturb sign simply isn’t getting the message across, you can ensure the world and his dog cannot burst in on you – by removing the doorhandle. The Disappearing Doorknob lives up to its name when you pull on your side of the handle (thankfully, the designers recognised the potential for mischief and made it work in just the one direction). 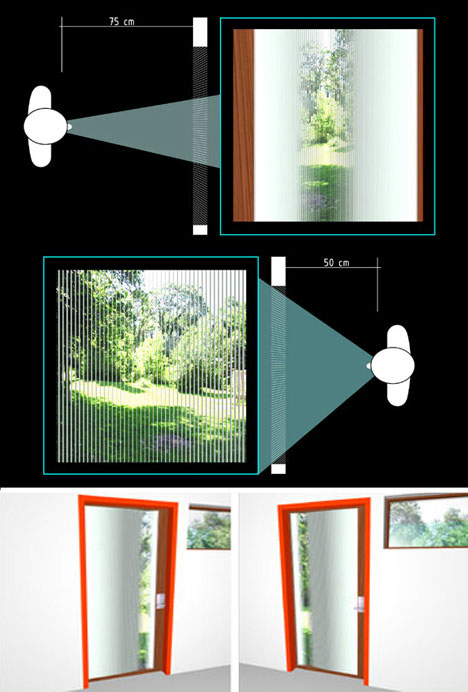 And last but not least, a door you can only see through if you’re standing in exactly the right spot.  If you’re further than 50 centimetres from the inside of the FOCUS Door, a curious milky fog creeps in from the edges of the glass, reducing your vision to a transparent central strip. Move left or right, and that strip moves to the opposite side of the door to you. Like the Disappearing Doorknob It’s another door to keep the world at arm’s length – in this case, consigning it to “out of sight, out of mind”!