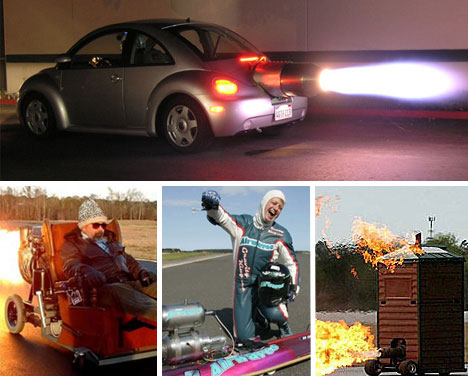 Why would a portable toilet need a jet engine and wheels? Jet and rocket engines are appearing in the most unexpected of places for reasons most people simply can’t comprehend. As examine these ridiculous, bizarre and in some cases incredibly dangerous DIY creations, you’ll be tempted to question the purpose of these objects and shake your head at the waste of fossil fuels. Perhaps more important is the amazing fact that all of the people who have taken these jet-powered contraptions on test drives lived to tell the tale. 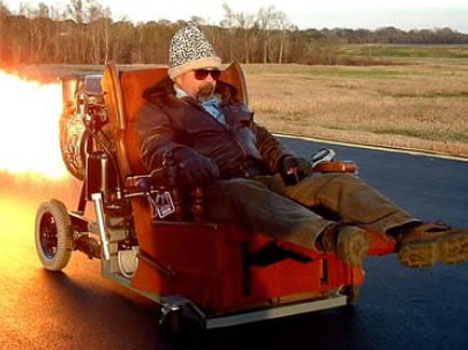 The next time you sink into that Lazy Boy chair during your favorite TV show and suddenly realize you’re out of beer, you could jet off to the store during a commercial and be back by the time the show’s back on – if only you had a rocket engine built into the back. There’s at least one guy in the world that thinks this sounds like a great idea: Bill Decambre built the ‘rocket recliner’ above and took it for a spin at the 2002 Reno Air Races. It looks comfortable, but you’d best come to terms with the idea of death before turning on the engine.

Is there a practical purpose for a jet-powered tractor lawnmower? Probably not, but it’s unlikely that ‘Turbitrac’ creator Nick Haddock cared much when he put this thing together. Nick explains how it works and even generously provides instructions to others who’d like to take a deadly, ridiculously fast ride on their very own jet-powered lawnmower on his website. 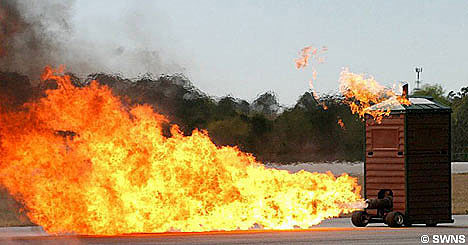 Why yes, that is a Port-a-John hurtling down the street with flames shooting out the back. It’s not because somebody thought lighting a match in a methane-filled box was a good idea, either – there’s a Boeing jet engine built into that thing. Mechanic Paul Sender spent £5,000 building the world’s fastest toilet that can go up to 70mp and sends a 30-foot fireball streaming out behind it. 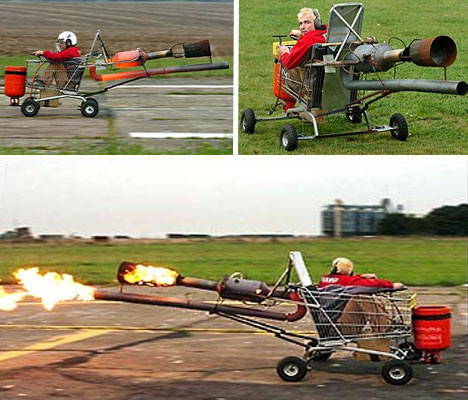 Andy Tyler followed instructions he found on the internet to build the jet engine that he then attached to, of all things, a shopping cart.  A heat shield at the rear of the cart protects him from the 600+ Celsius temperatures that the engine reaches when in use. Scrap wheels, brakes and a steering device finish it off. “It can’t go on roads, runs out of fuel after two minutes and at over 50mph becomes unstable. People think I’m off my trolley but it’s exhilarating.” 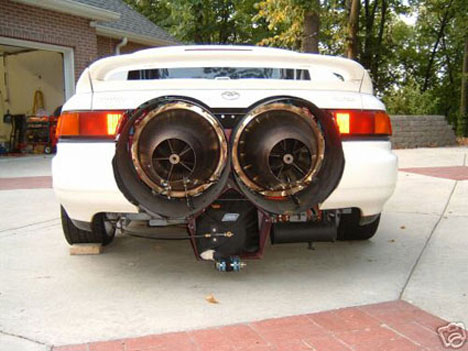 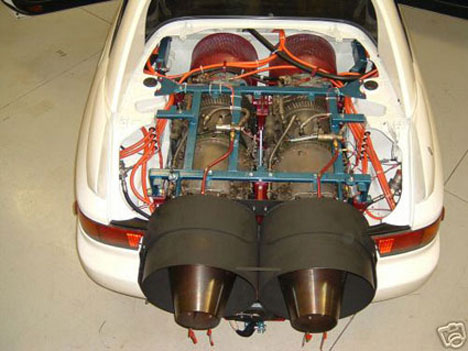 Why a Toyota MR2 would need twin jet engines is anybody’s guess, but one thing was for certain when photos of this car first started making the rounds on the internet: you can officially buy anything and everything on eBay. It was up for auction in 2005 with a description that read “everybody needs one of these”. No word on how much it sold for. 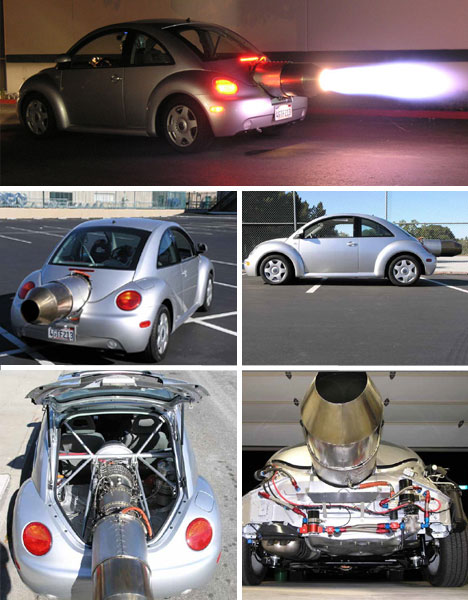 Engineer Ron Patrick wanted “the wildest street-legal ride possible”, so he outfitted his VW Beetle with a dual engine that allows him to legally drive it on public roads for everyday transportation and take it for the occasional insanely fast spin on the track. Patrick says he doesn’t know how fast it’ll go and probably never will, since he’s not looking to kill himself. 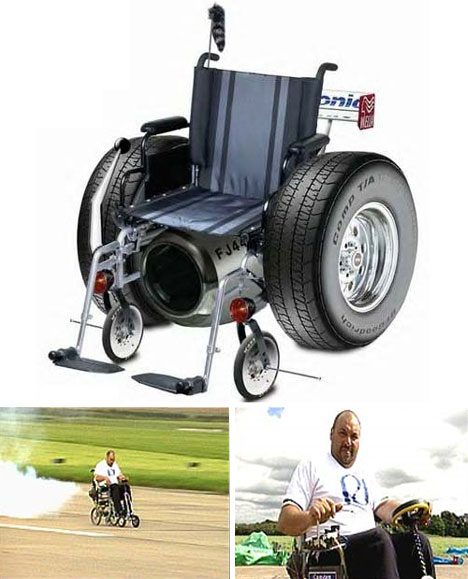 The Allegro Medical jet-powered concept wheelchair, pictured top, may not actually be a real functioning vehicle – but that doesn’t mean a jet-powered wheelchair has never really been made. Giuseppe Cannella of England surprised his Parkinson’s Disease-afflicted mother-in-law by bolting a jet engine to the back of her wheelchair and equipping it with a steering wheel. Cannella put on shows in the wheelchair to raise money for the Parkinson’s Disease Society. 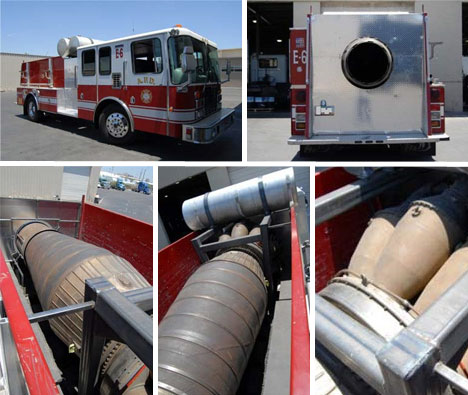 (images via: Life on Top)

This fire truck could certainly get to an emergency fast, but it wouldn’t be much help given that installing a 27-foot-long Russian MiG fighter jet engine in the back of it required the removal of its water tanks. Said to house the largest turbine motor in a land vehicle anywhere in the world, it’s hard to imagine this vehicle being able to stop itself once it gets going given the weight of that massive engine. 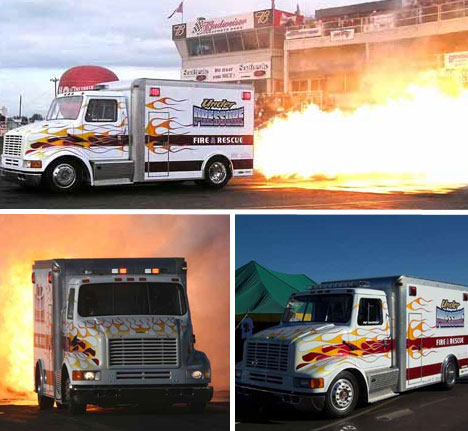 Continuing the trend of making emergency vehicles useless by outfitting them with jet engines, this ambulance could theoretically go up to 205mph but can’t carry any patients due to the engine taking up all of the space in the back. It’s powered by a GE J-79 jet engine from a Ford Phantom 4130 and features functional lights and sirens, aluminum wheels and disc brakes with questionable efficacy. It’s for sale, so if you’ve got $189,000 to spare, you can have it for yourself. 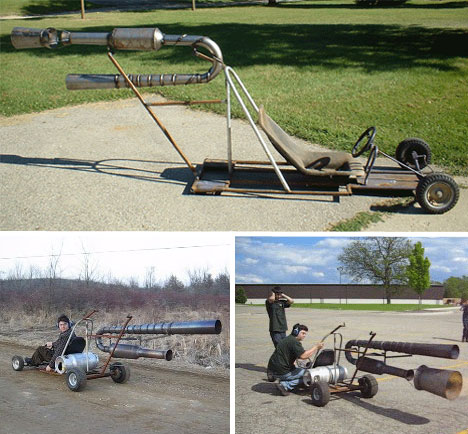 Zach Sartell is just one of many enthusiasts who have made their own jet-powered go karts at home, spending years testing and modifying parts until he got it to reach 50mph – albeit, with brakes that barely worked. Another design, by ‘Missile Man’, appeared in the Jet Racers episode of UK series Scrapheap Challenge, as seen in the clip above. 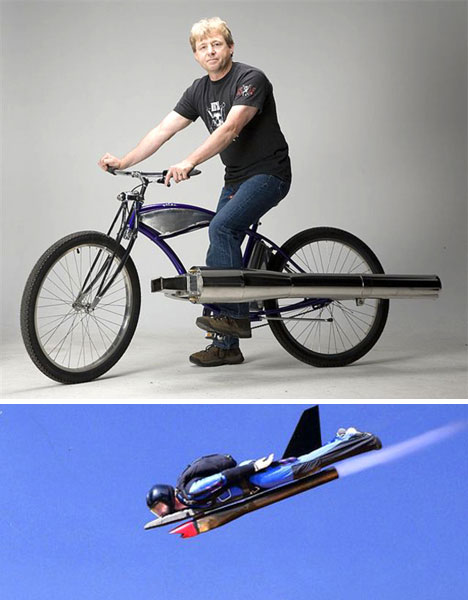 Bob Maddox bolts pulse jet engines onto old-school cruiser bicycles and sells them on eBay. He’s gotten his own up to 50mph, which he says “feels way too fast”, and figures it could hit 75mph if anyone were brave enough to try it. The engine is so loud that if you don’t wear protective gear, you could pop your eardrums. Maddox also straps a jet engine to his chest when skydiving in an amazing feat of not ending up smashed on the sidewalk like a bug. 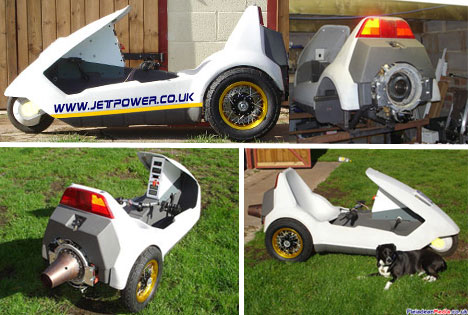 The Sinclair C5, a battery electric vehicle invented in the 80’s that suffered a public relations disaster when it debuted, was meant to be the beginning of eco-friendly personal transport. It didn’t exactly take off, but an enthusiast named Richard Hammonds decided to equip his very own C5 with a JFS100 jet engine, making it infinitely faster but less than environmentally friendly. It can get up to 100mph on a smooth surface and is described by Hammonds as being “very noisy and very dangerous”. 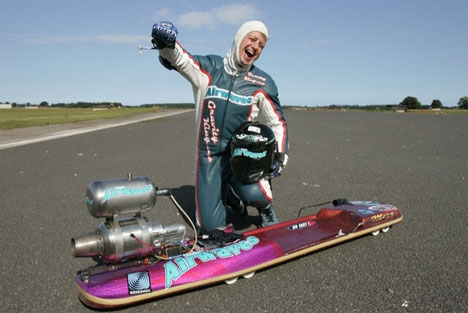 Joel King strapped a 90,000-rpm jet engine to a two-meter street luge and broke a world speed record, reaching 112mph. Despite the engine’s small size it puts out 80lbs of thrust, propelling King around the track at breakneck speed strapped to a board just a few inches off the ground. The engine King used was an off-the-shelf model that’s normally used on unmanned aircraft and to get gliders up to altitude. 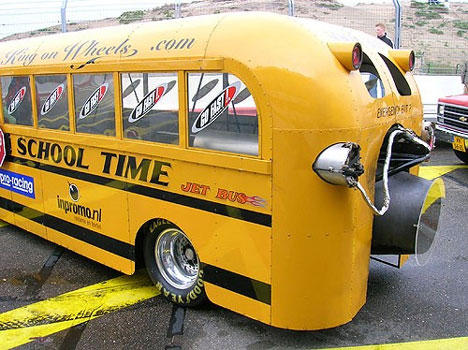 No parent in their right mind would ever allow their children to travel on this jet-powered school bus, but that’s ok – it’s no longer meant to shuttle kids to and from school. The jet engine takes up so much room that only a few people can fit inside. There is reportedly a Westinghouse J-34 Turbojet housed under all that yellow aluminum. 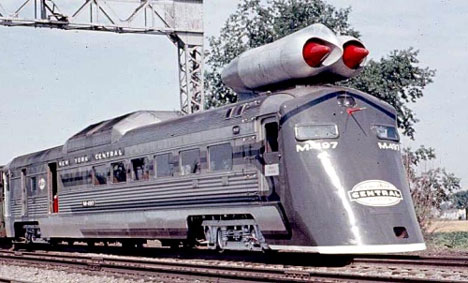 In the 60’s, New York Central was experimenting with building high-speed trains on the cheap, hence the M-497 – a modified Budd commuter car with US Air Force surplus General Electric J47-19 jet engines in a B36-H bomber engine pod planted on the top. It reached a top speed of 183.681 mph – still the current high speed record for light rail in the United States. Once the experiment was over, the jet engines were removed and the train went back to regular commuter duty until it was cannibalized for parts in 1977 – the end of a short but amazing jet train era.