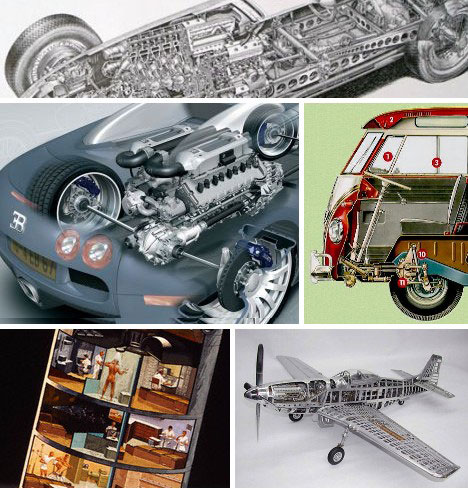 Vehicle cutaways are a very special kind of art that lays bare a driving machine’s inner workings for prying eyes to see… without all the messy prying with crowbars and such.

Ghosts, Phantoms and Skeletons, Oh My! 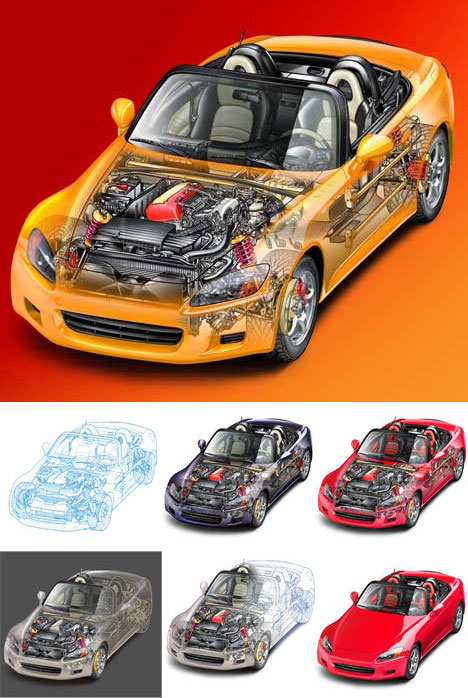 Producing cutaway illustrations isn’t all fun & games – it also serves a vital need for companies trying to present their product or service in the best possible light. Automotive illustrators Beau Daniels and Alan Daniels specialize in what they call “cutaway, ghosted and phantom view illustrations, of automobiles, vehicle systems and automotive products.” 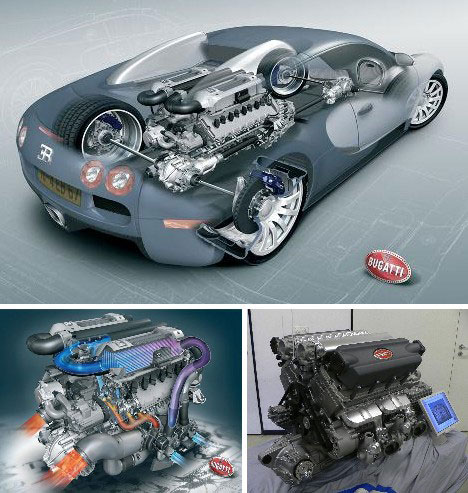 Not many will have a chance to see a The Bugatti Veyron 16.4 up close & personal so this bold cutaway offers a rare chance to get inside the rare and beautiful exotic. The Veyron’s massive 1,001 horsepower sixteen-cylinder engine is rendered all the more intimidating by the use of cutaway effects.

Zooming In, Under the Skin 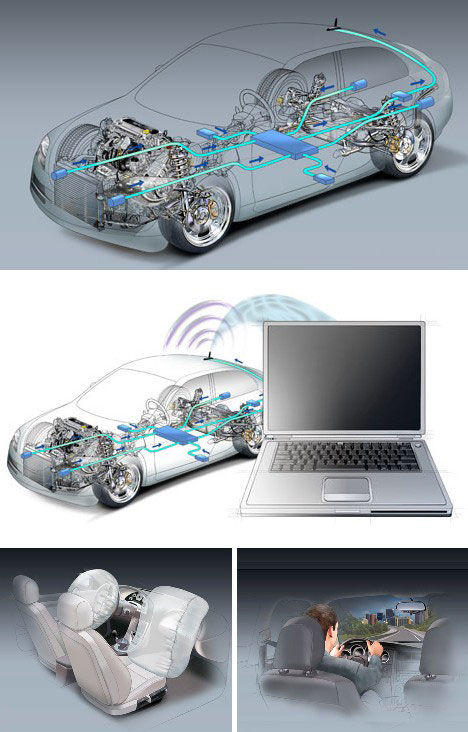 Cutaways also assist in highlighting some certain system – electrical wiring, fuel lines, even the sound system’s snake-nest of wiring. In the image above, it’s GM’s OnStar system that’s put in proper perspective. With futuristic electronic systems like OnStar, seeing is believing. A nicely done cutaway brings the desired system into focus while showing how it relates to the rest of the vehicle. 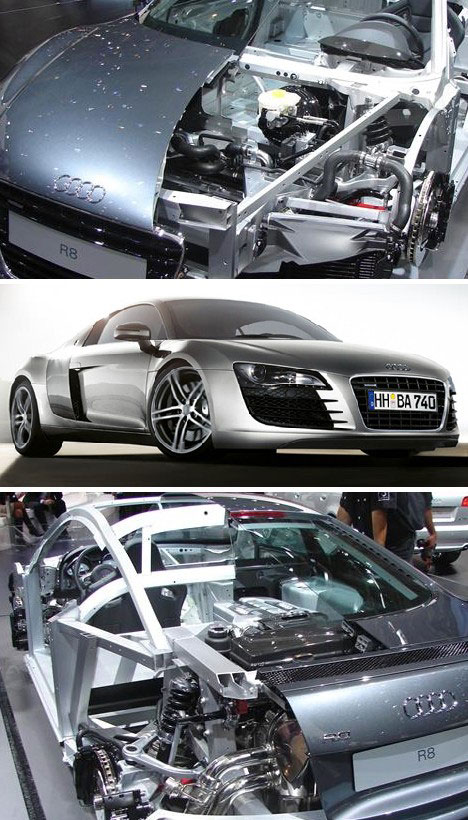 There are always situations that call for a cutaway that’s literally cut away. Auto show displays, for example, are intended to get the message across to large numbers of visitors who check out the exhibit in person, not via their computer screens. It can be very effective, though no doubt very painful – not to the magnificent Audi R8 shown above, but for anyone who appreciates this stunning automobile. 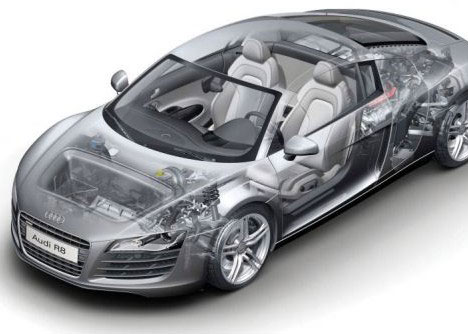 Audi lovers who prefer their cutaways to be computer generated would much prefer the image above, a classic cutaway of the German automaker’s design and engineering tour de force. 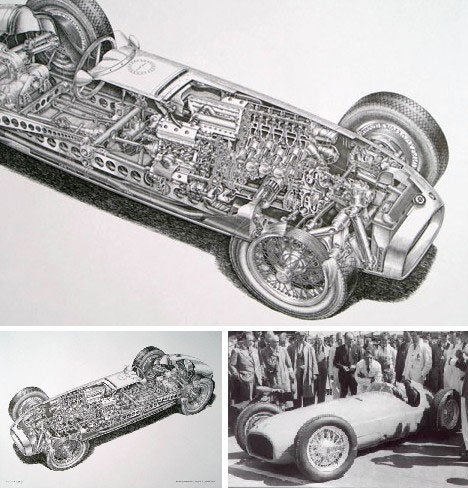 (images via: Forix and Arte Auto)

When creating cutaways of classic cars, sometimes the traditional method of portrayal works best. So thinks Japanese master Yoshihiro Inomoto whose technique shines in this intricately detailed drawing of a 1951 BRM Type 15 race car. The Black & white color scheme is perfectly suited to the vintage racer and Inomoto does it true justice with this undoubtedly time-consuming tribute. 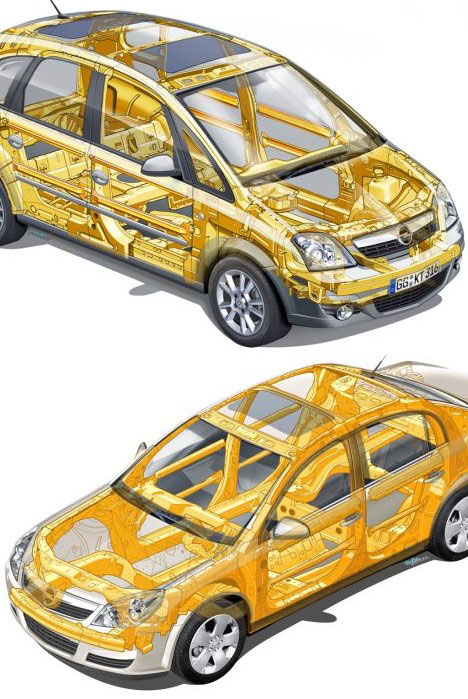 On the other hand, the modern cutaways of GM’s German Opel brand practically scream with vivid color, all the better to contrast the various technical systems inside the company’s cars. Studio Parsons worked up these exquisite cutaways that, as much as Yoshihiro Inomoto’s monotone drawings, are works of art in their own right.

Mini Cuts to the Max 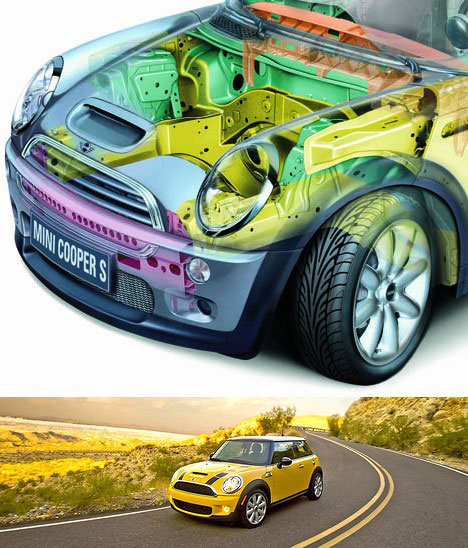 (images via: Cartype and Tanyasha)

The new Mini also uses color in the above cutaway, this time to highlight its safety structure (in orange). Complementary to Mini’s “fun” image, the rest of the car is depicted in rainbow hues that, while not keyed to individual components, make the composition as a whole much easier on the eyes.

Microbus Under the Microscope 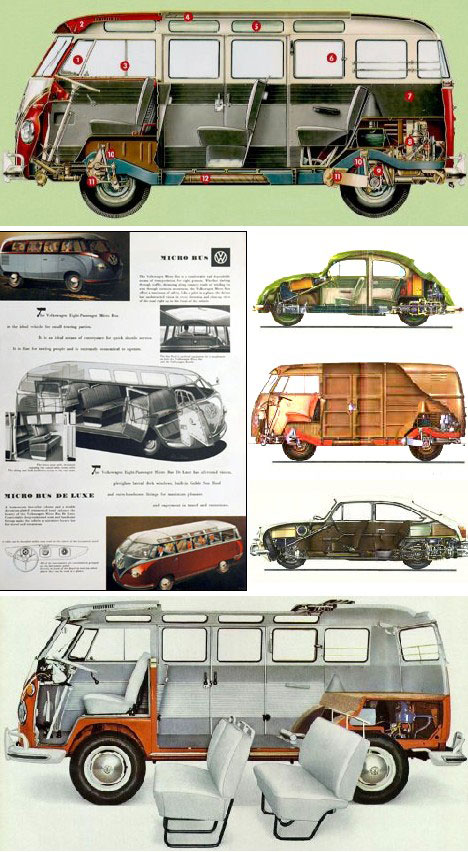 (images via: McLellan’s Automotive and Cartype)

Volkswagen has often used cutaway illustrations in its ads as they show off the space-saving design of the company’s products – especially the iconic Type 2 Microbus. VW was perhaps the first foreign automaker to seriously impact the North American car market; mainly shrugged off by the Big Three then, VW today stands an excellent chance of outliving its former big brothers. 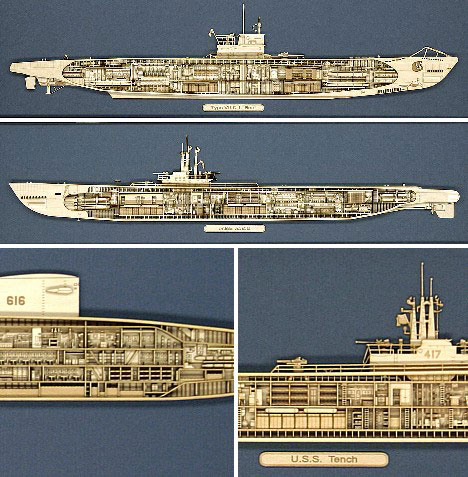 Cars aren’t the only vehicles featured in cutaway drawings though they’re by far the most popular. Military vehicles on land, sea and air come in a close second. Above are cutaway framed art depicting some of the submarines of the Second World War and the years after. From the top above are a German type VII-C U-Boat, the USS Balao, the USS Lafayette (lower left) and the USS Tench (lower right). 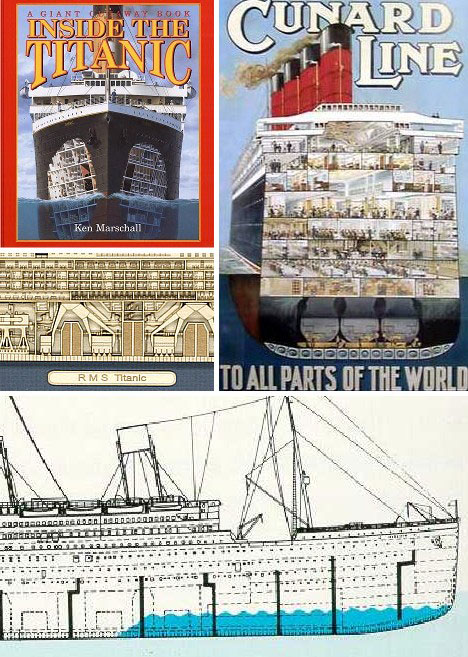 The RMS Titanic is not only the most famous ship to sink, it’s also one of the most popular subjects for cutaway illustrations even going back to the 1920s. Cutaways were also used by competing shipping lines, such as the Cunard Line’s RMS Aquitania shown above right. 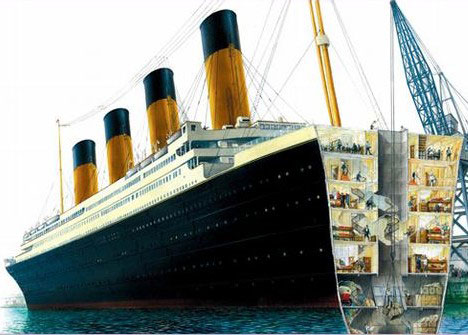 (images via: The Art Agency)

Part of the fascination people have always had for the Titanic involves how an “unsinkable” ship could sink, and why the loss of life was so tragically high. Cutaway drawings reveal the ship’s inner structure and showcase the advance system of waterproof bulkheads that, sadly, was not quite advanced enough. 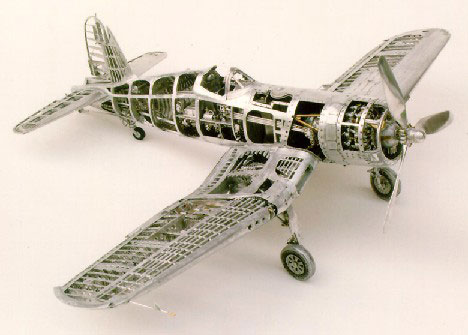 As complex and detailed cutaway designs are when viewed in book or on screen, just imagine how they’d look rendered in 3D. Young C. Park did; then he decided to make it happen. 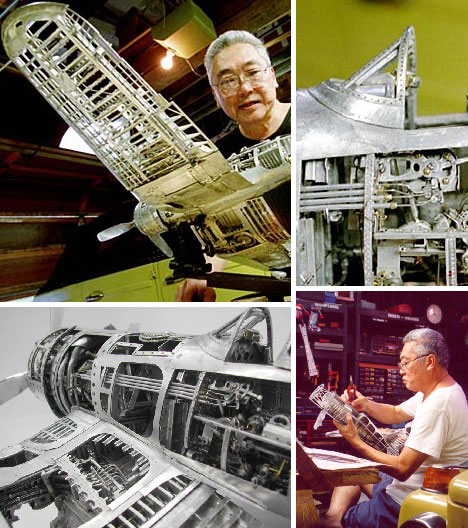 The 76-year-old former dentist from Hawaii has devoted countless hours towards recreating some of America’s best-known WW2 fighter planes in hand crafted aluminum, and as a bonus he’s designed them as full or partial cutaways! The Vought F4U Corsair fighter above (which took over 3 years to make) is cutaway on one side, accurately displaying its mechanics in miniature. 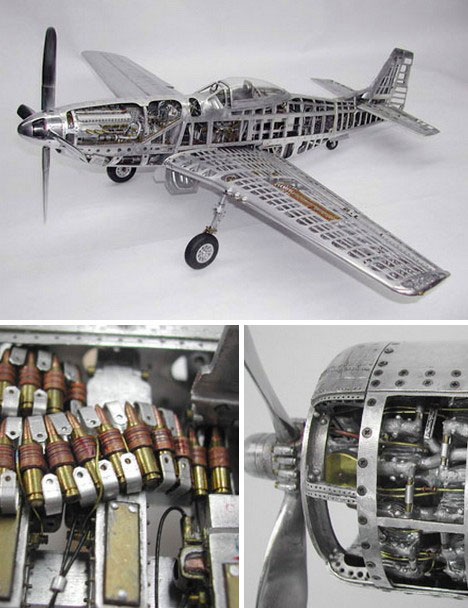 Park also crafted the P51-D Mustang fighter above. Cut away on one side, it features many moving parts, including the canopy, and shows off its 50-cal machine guns complete with bullets set into belts just like those in the actual warbird. 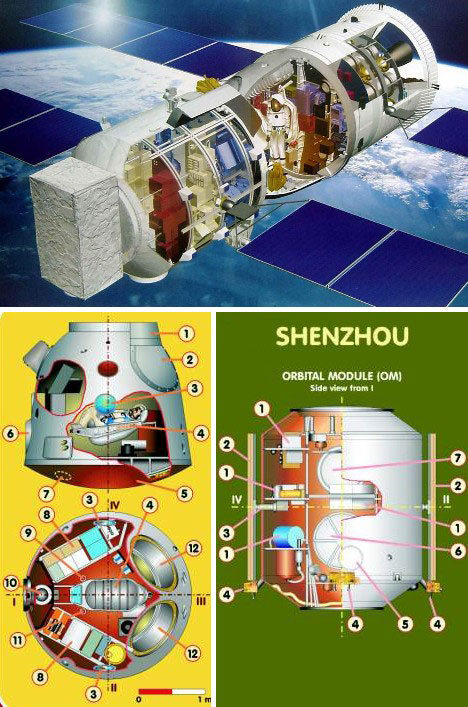 Space, the final frontier… and cutaways help the earthbound understand just what those billions and billions (of dollars) are paying for. Less cynically – and in the case of the Chinese Shenzhou spacecraft above – they serve to show off a space-faring nation’s newfound mastery of the most complex systems known to mankind. 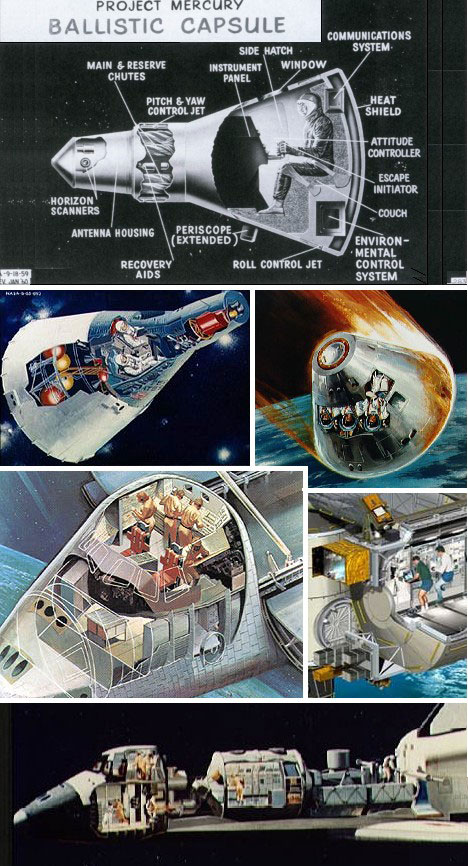 (images via: NASA and NASA Images)

NASA‘s history is one illustrated with cutaway drawings; the topmost of which shows clearly just how small and cramped the early 1960s Mercury program space capsules were. 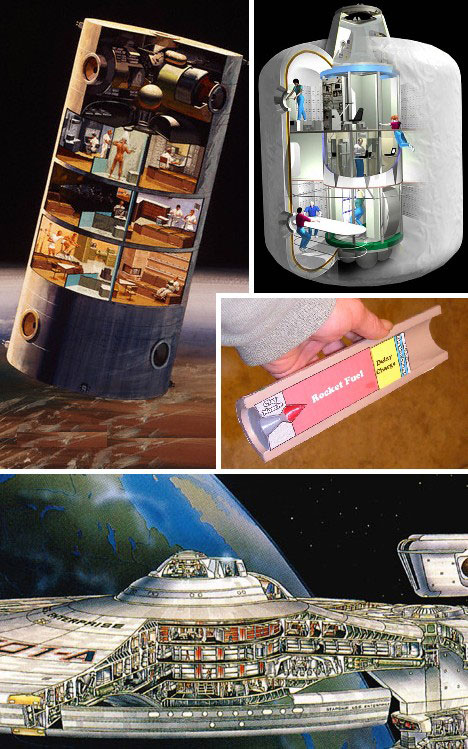 And what of the future? Cutaways then, now and in times to come will help us understand what makes our vehicles run, float, fly, and set off on five-year missions to explore strange new worlds, to seek out new life and new civilizations, to boldly go where no man has gone before… Cut!