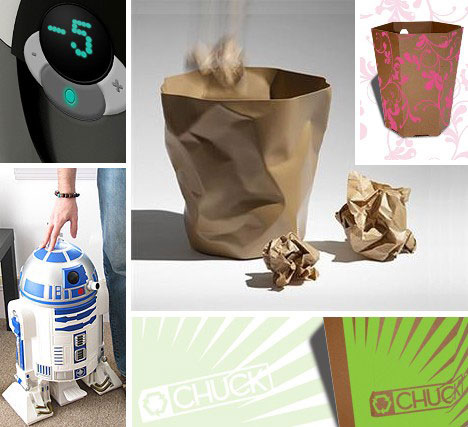 Trashcans, garbage bins, room wastebaskets, whatever – the humble refuse receptacle is part and parcel of our consumable (and disposable) society. These Dirty Dozen not only take on the thankless job of storing our trash; they do it in style. Garbage in, garbage out… either way it’s “bin” a blast! 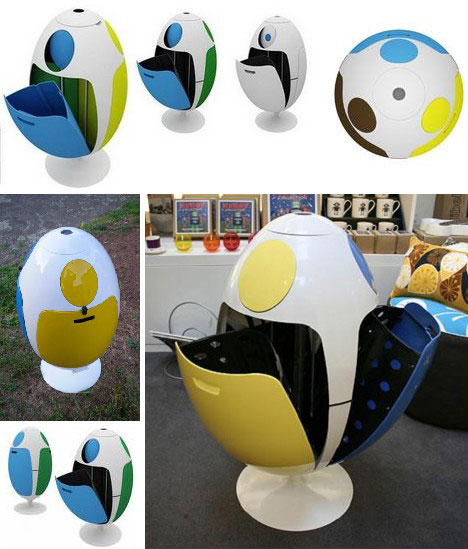 (images via: Eco-Age and Lifestyle Bazarr)

Officially described as a “segregated waste bin”, the Ovetto Recycling Egg is meant to store recyclables in three color-coded segments. It can also mind your trash until garbage pick-up day. The thoughtful design by Italian architect and environmentalist Gianluca Soldi addresses real issues well-meaning trash tossers care about – such as providing a large push-button above each bin sector that precludes the need to touch any messy areas around the bin lids. 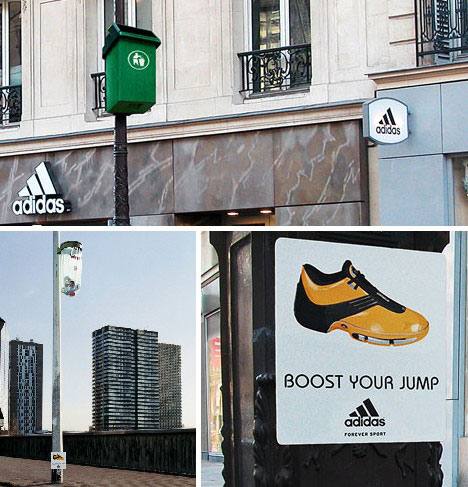 (images via: I Believe In Advertising)

Adidas came up with a cool way to advertise their basketball shoes. Just outside their Paris store, the company set up trash receptacles and recycling bins 10 feet off the ground – the height of a regulation basketball net. There are no images showing passersby actually making the leap to toss their trash but as a attention-grabbing guerrilla marketing exercise for the popular sneaker-maker it’s a slam dunk. 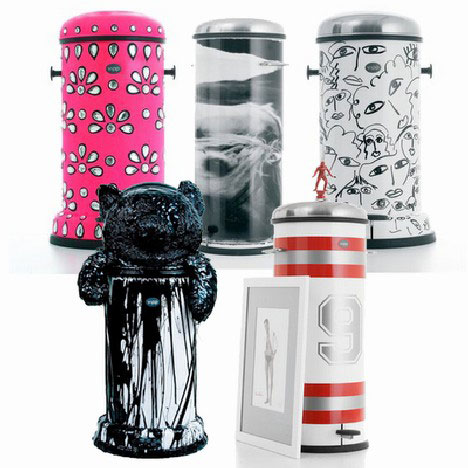 (images via: If It’s Hip It’s Here and Notcot)

The original pedal-operated trash bin was perfected in 1939 by Holger Nielsen of Denmark’s Vipp Inc., and recently the company organized a charity auction around a set of celebrity-designed Vipp pedal bins. Among the designers were Danish supermodel Helena Christensen. Proceeds from the auction were to benefit both the Chernobyl Children’s Project International (CCPI) and Foodbank New York City, a non-profit organization dedicated to alleviating poverty in the Big Apple.

The World’s Coolest Trash Can 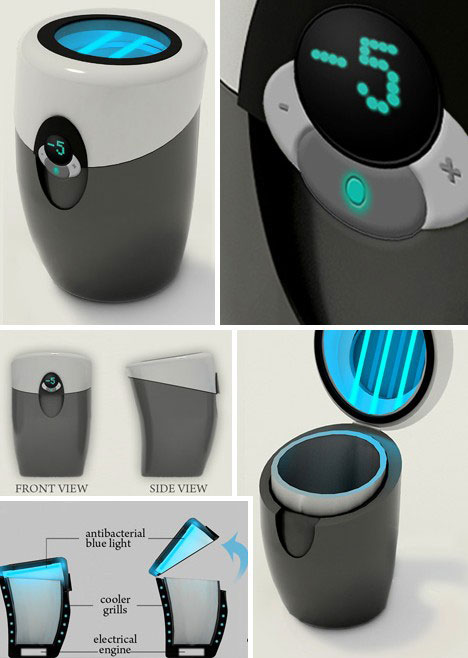 Coolness comes in many forms, though most people wouldn’t expect one of them to be a trash can. Nevertheless, Turkish designer Cem Tutuncuoglu had a dream… a dream of indoor garbage cans that wouldn’t smell up the place in between trash pickup days. With the Minus trash bin, food waste (the most common smelly garbage) is chilled so bacteria can’t become active. An anti-bacterial light adds a little insurance – those wee beasties are tough! No need to open up the Minus to see how full it is; the see-through plastic lid solves that issue. In other words, why constant open to check the works? That’s nobody’s business but the Turks’.

Recycling Is The Key 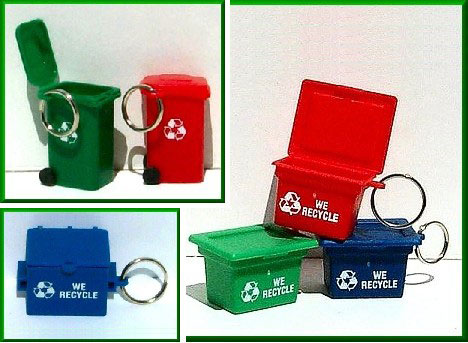 A company called Amazing Recycled Products is offering a series of colorful key chains, pencil holders and more that are, essentially, plastic trash and recycling bins in miniature. The bins have snap-tight lids to keep your keys, change, tiny trash items etc in their place. Best of all, they’re made from a minimum of 25% post consumer content meaning they themselves are recyclable.

These Aren’t The Bins You’re Looking For 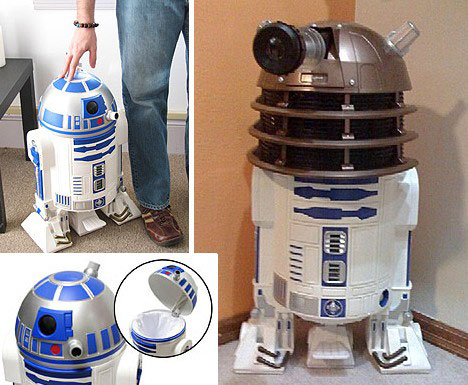 (images via: ThinkGeek and Kiedis)

Oh, the indignity of it all! The venerable Star Wars franchise must have fallen on hard times because trusty droid R2-D2 has been reduced to a glorified trash can. C3-P0 must be smirking and cattily whispering “I told you so!” somewhere. In any case, R2 is here in all his diminished glory, fully detailed and fully lined in order to accept your orders – and your trash. Want to flip R2’s lid? Step on his center foot… if that makes you uncomfortable, just be glad you’re not him.

Sensor Can Soothes The Germ-Phobic 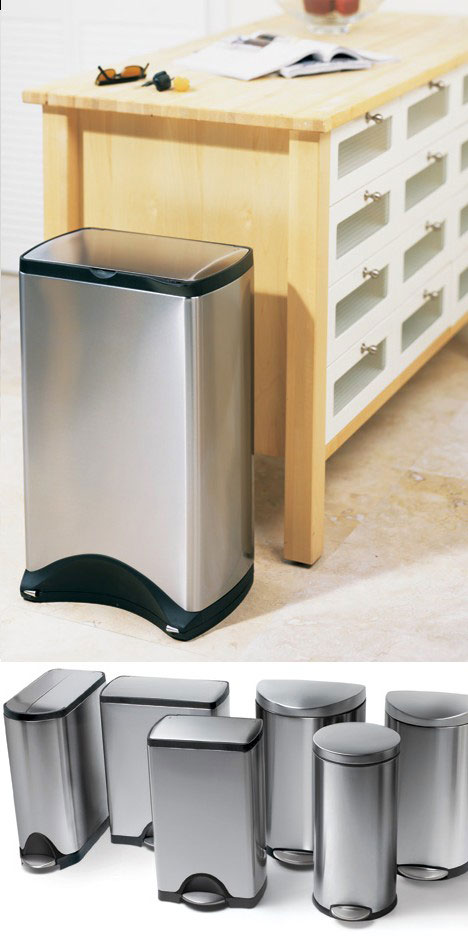 (images via: SimpleHuman and Apartment Therapy)

Reluctant to deal with “center feet” yet not sufficiently advanced in Jedi powers to lift the lid remotely? Simplehuman can help, you pathetic simple human! The company makes beautiful trash cans and waste baskets decked out in brushed steel – normally a magnet for fingerprints but these cans are clear-coated to resist smudges and spills. For those too germ-phobic to even step on a pedal, the premium model has an infrared sensor that opens the lid at your mere approach. 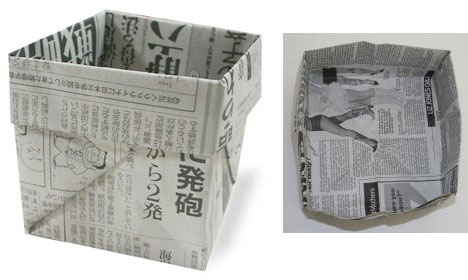 (images via: Wisebread and Activity Village)

Fed up with trash cans you have to clean? Wouldn’t it be nice if yoo could toss the trash out WITH the trash, or even better, use a recyclable recycling bin? Sure it would… and so it is! Thanks to the ancient Japanese technique of paper folding (origami) you can whip up a handy paper container from old newspapers anytime you need one. Good news indeed!

Want to fold your own newspaper trash bins? They’re not all that big but the average newspaper makes a bunch of them. Check out the following video for easy instructions:

The World’s Trashiest Trash Can 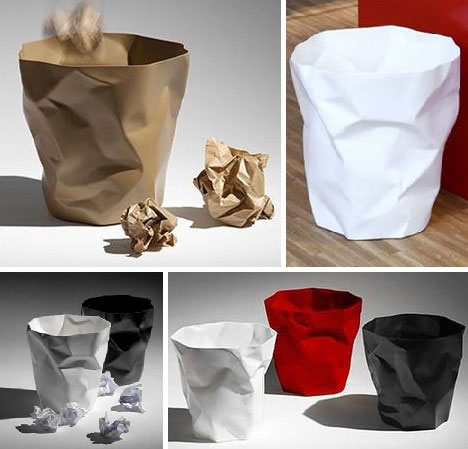 (images via: Bedzine and Unica Home)

If form follows function, then the Bin Bin wastebasket passes with flying colors: black, bright red, brown and white to be exact. The 13-inch high Bin Bin bins were designed by John Brauer and are distributed by Essey of Denmark. They may look like crumpled paper but hard, durable plastic composition ensures they’ll stick around a lot longer then your rejected scribblings and sneezed-into tissues. Eww.

Chuck It In Chuck 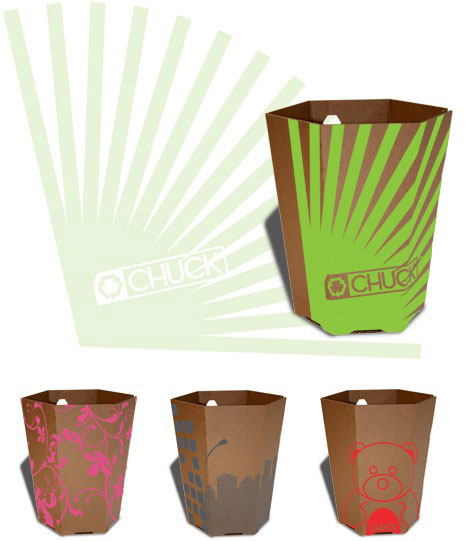 (images via: Nature Repurposed and Chuck)

Chuck is a 100% recycled cardboard wastebasket made from cardboard scraps that used to be “chucked” out with the trash. Not any longer, green is in and Chuck is here! Available in a range of designs printed with low VOC water-based inks, these bins are styled to please and have a handy finger hole near the rim for easy lifting.

It’s Fabriano, If You Pleats 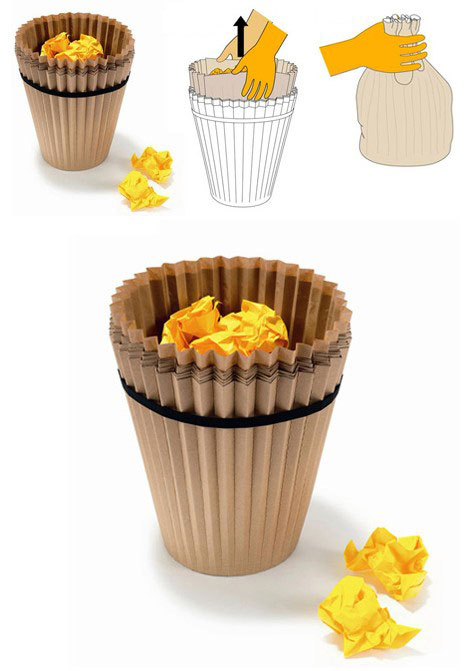 The 2009 exhibition Dismettiamola! which took place in Milan, Italy featured an ingenious trashcan design from Riccardo Nannini, Domenico Orefice and Emanuele Pizzolorusso. The Fabriano wastepaper basket resembles a stack of coffee filters and works much the same way – not to strain your coffee, but toss your trash. Simply gather the pleated rim when the bin is full, lift out and voila: a new, clean bag liner awaits. The liners, which come 50 to a pack, are made of recycled paper and have a natural look to complement most decor schemes.

Reading On The Can 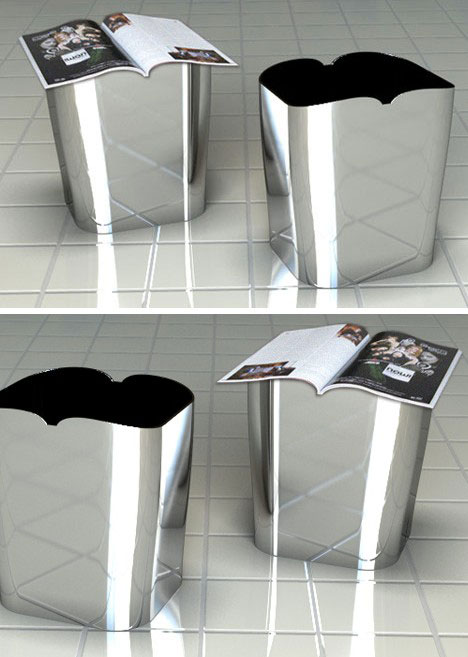 Stephan Hauser’s gleaming metal “Dustbin” won’t be collecting much dust from bathroom readers – its contoured rim is the perfect match for a magazine. Prop one up, kick back and, er, relax. When you’re done, leave the magazine on top of the bin to act as a lid. Just remember not to leave any of “those” magazines open on the bin… and wash your hands, hotshot.