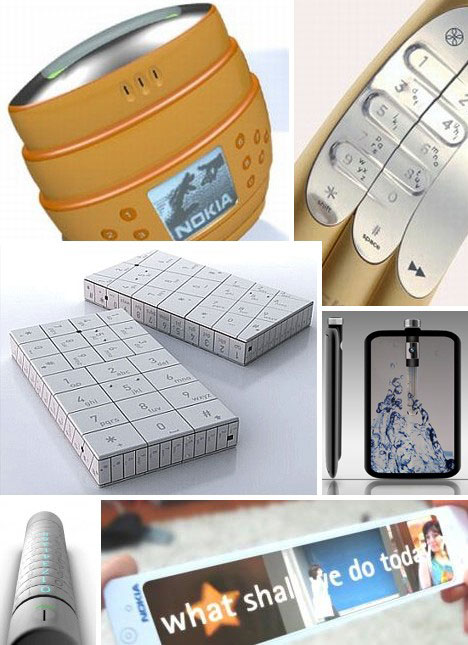 Cell phone technology and styling continue to progress by leaps and bounds bu that still leaves a lot of wiggle room for creative engineers eager to answer the call for ever odder phones. Here are 15 of the hottest cellphone concepts around. Your future’s calling! 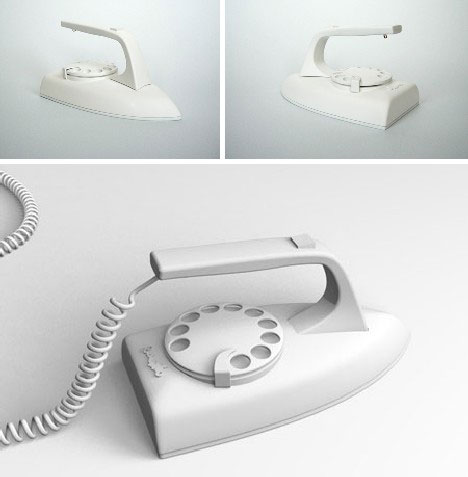 Concept cellphones aren’t always feature-packed and futuristic – sometimes they’re just the opposite. Maybe UK-based designer Vladimir Rachev misunderstood when someone requested he create a cellphone tough as iron. Maybe he wasn’t listening; lost inside his own bizarre, twisted world. In any case, the Iron Phone addresses the worst fears of harried housewives speed-ironing while waiting for that all-important phone call. Happy now, Vlad? 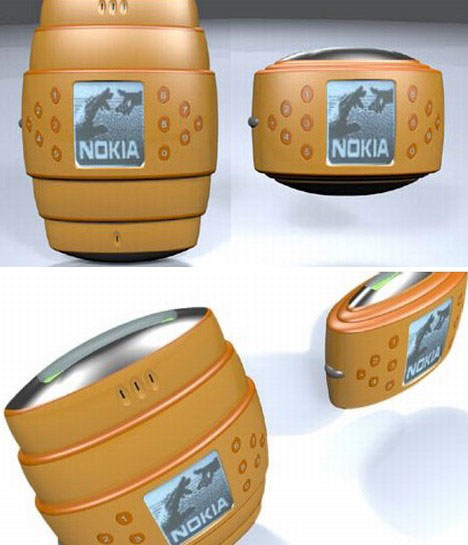 The unique style of Jonathan C. Smith’s 03-Phone is said to be inspired by the banded body plan of an armadillo; ditto its coppery color and matte metallic sheen. The phone features a jog wheel that allows the structure to collapse in upon itself, making it much more compact and easy to store in pockets or purses.

Let’s Do The Twist 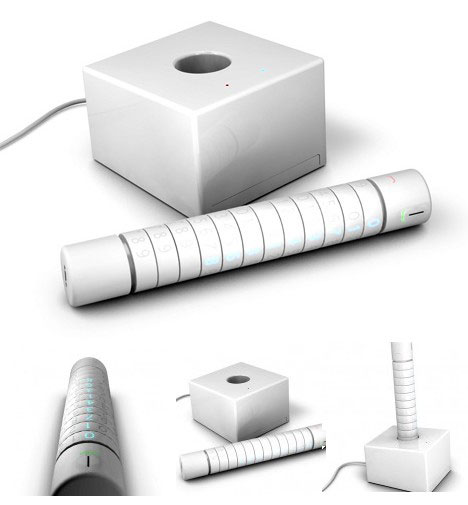 The Cryptex phone doesn’t use buttons or a screen because, well, these are the things people expect their cellphones to have and that would be just too easy. Operating the Cryptex requires a whole new way of looking at cellphones, plus a hefty helping of haptic technology and wrists of steel. Twist any dial to turn the phone on; twist the number dials one at a time to make a call. It’s hard to imagine anyone waiting for this phone, except Chubby Checker who’s anxiously waiting for a commercial gig. 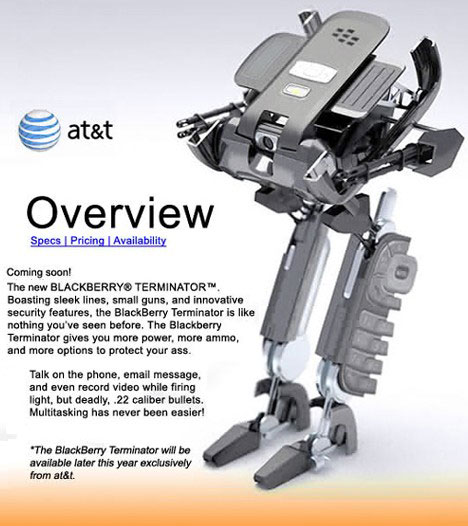 The so-called Blackberry Terminator 9900 and the Parkoz Hardware Transformers Cell Phone have yet to be seen in the same room together, not that there’s anything wrong with that. Regardless, this is one VERY mobile phone that might not get held up – though considering its complement of machine guns, YOU might be!

Conduit Can Do It 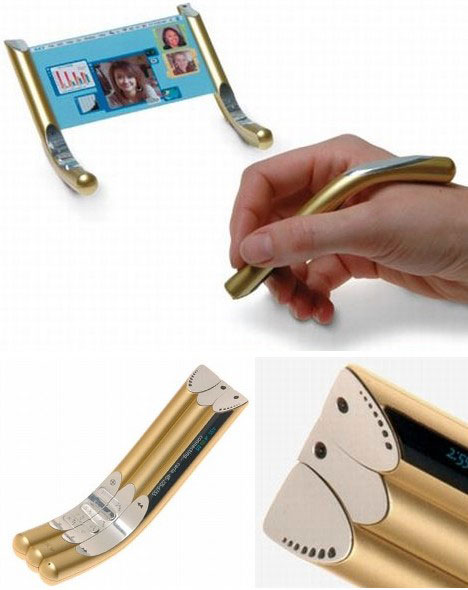 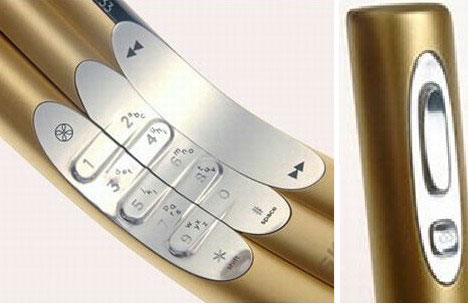 Tirshathah Hunter has crafted a concept phone that looks almost too good to actually use, though the LEGO generation would surely love to get their hands on it. The Conduit breaks down into three discrete devices: a slimline cellphone, a camera phone and a PDA including stylus. The pieces can also be positioned in such a way as to support a flexible roll-up screen.

Too Board To Chat 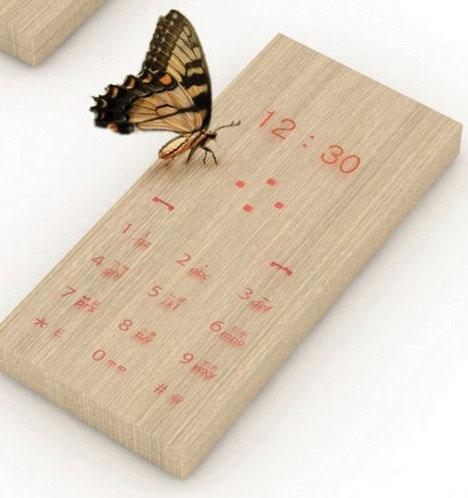 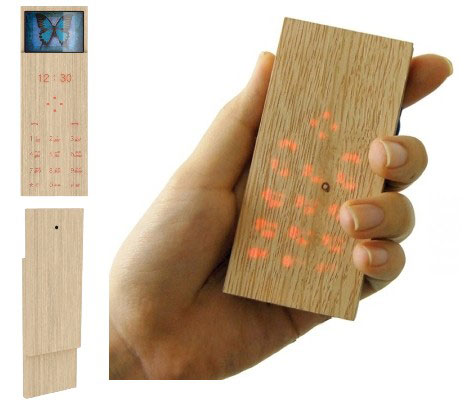 As cool as this Maple wood camera phone concept is, it only won the Silver at the 2008 International Design Excellence Awards. Kudos to Korean designers Hyun Jin Yoon and Eun Hak Lee for leafing well enough alone and not barking their disappointment to the judges. The compact slider-style phone features backlit numerals activated by touch-sensitive sensors on the back. 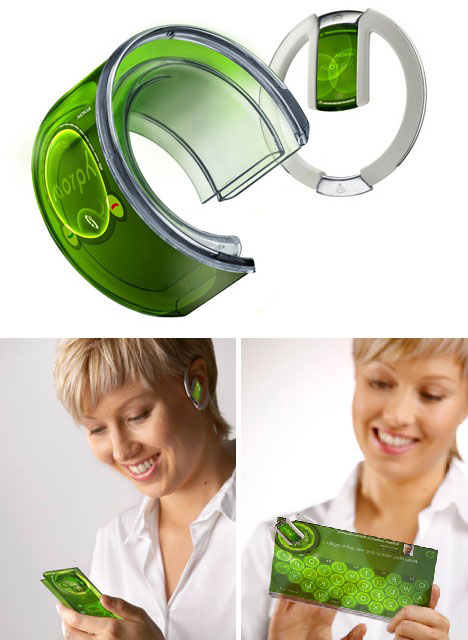 (images via: Techfre and Nokia)

Even the big phone-makers dabble in concepts from time to time, as the intriguing series of Morph cell phone concepts from Nokia demonstrates. The most notable Morph is the wrist-worn version that functions both as a beauteous bangle and a slick cell phone. Integrated electronics and self-cleaning surfaces employing today’s hot buzzword, nanotechnology, add a dash of futuristic elan. 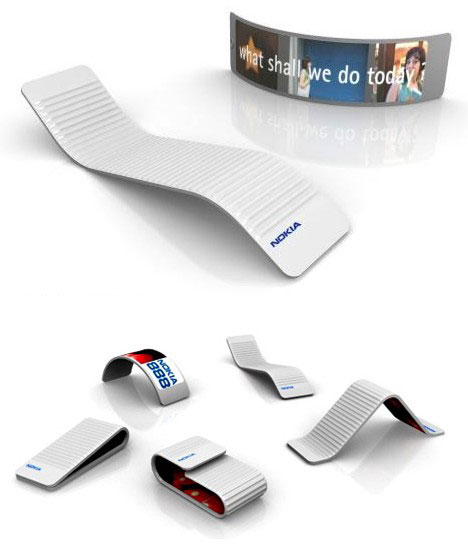 Nokia has more than one trick up its sleeve, thanks to the Nokia 888 concept phone designed by Turkish design student Tamer Nakisci. Crafted with the Nokia Benelux Open Design Awards in mind, the 888 concept responds to the need for flexibility by being, well, flexible. It can even be worn like a wristband for true hands-free operation. The phone is powered by liquid batteries and is packed with advanced features such as a bendable touchscreen, a touch-sensitive body cover and speech recognition capability.

Here’s a video of the Nokia 888 in action (and reaction): 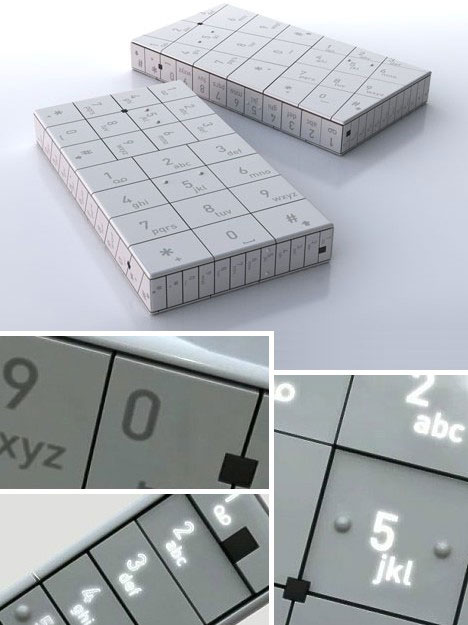 The above little number – covered in little numbers – is the CUin5 mobile phone concept by Branco Lukic; one of “non.object” series. Conceived as a “super practical” phone, the CUin5 features a numeric keypad, mike & speaker on each of its faces. The face you touch first activates while the others lock down.

Check out this video of the CUin5 – wait ’til the 35-second point, it’s worth it:

Snakes On A Phone 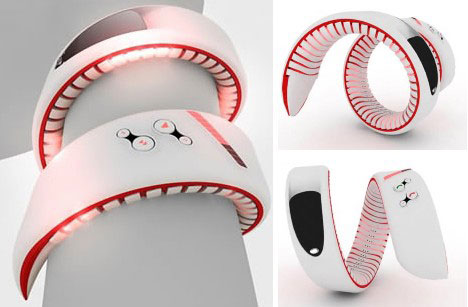 The BenQ-Siemens concept phone also follows the snakelike, wrap around the wrist ethos that many cell phone designers are following. In theory, making the phone easier to carry and more secure to hold involved having the phone hold on to YOU. 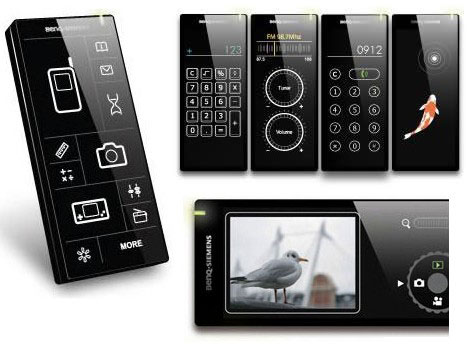 Also from BenQ-Siemens is the Black Box – a very intriguing concept phone whose touchscreen changes its layout depending on what functions the user selects. Sadly, the Black Box is doomed to remain a concept as BenQ-Siemens has folded their European operations. At least it can be said they went out with a bang. 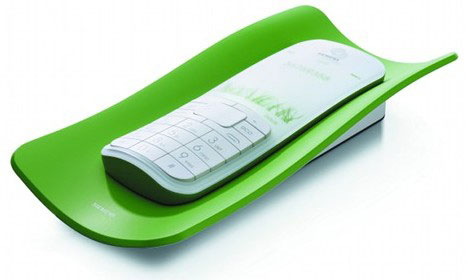 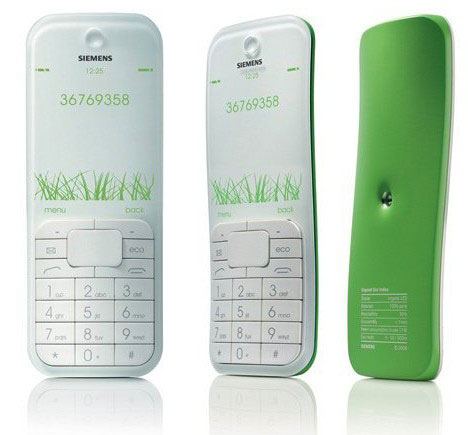 (images via: Yanko Design and Gigaset)

Enjoying the benefits of modern technology while still being environmentally conscious is sort of like having your cake and eating it too – it’s not so easy, in other words. Leaf, an innovative new concept design from Siemens’ Gigaset Eco Visions series, is made of recyclable eco-plastic and sports an invisible OLED display hidden behind a translucent lens encasement. It looks like a leaf – and you’ll feel all warm, fuzzy and eco-friendly while you’re using it to order in some organic, vegetarian fast food. 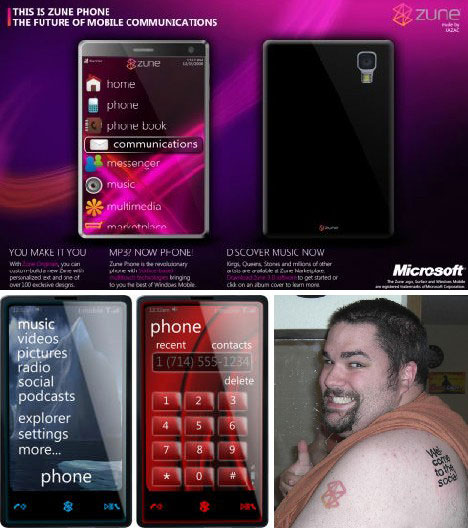 (images via: Zunescene and Concept Phones)

Did Apple dodge a bullet when Microsoft canceled the promising Zune 3 concept phone? Depends on if you’re an Apple fanboy or in the Zune platoon. Either way, the Zune 3 is – was – an impressive piece of engineering. Those familiar with the Zune 80 would feel right at home while enjoying added features such as built-in IE and WiFi. The scratch-resistant, touch-sensitive glass that completely covers the front of the shell is especially impressive. 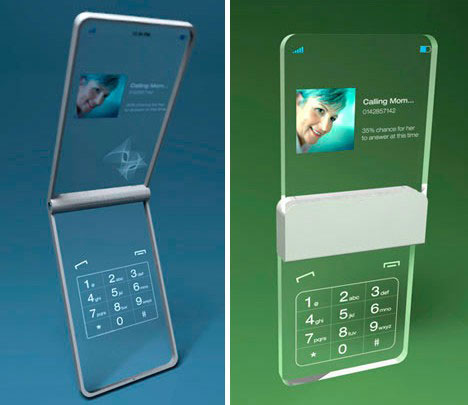 (images via: Trends Updates and Ubergizmo)

Designer Mac Funamizu explores some tantalizing technology with the Glassy Glassy transparent phone concept: the screen, graphics and numerals aren’t visible until the phone is turned on. While one might be concerned about the survivability of a glass phone in real life situations, the basic tech employed in the Glassy Glassy is quite workable and should show up on everyday cell phones of the future.

The Bender Of Cell Phones 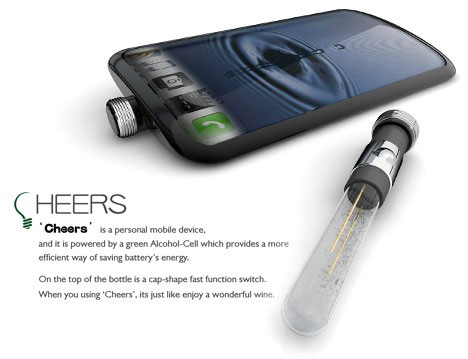 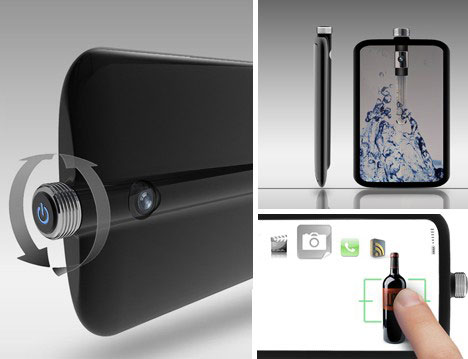 (images via: Textually and Yanko Design)

Cheers isn’t just a place where everyone knows your name, it’s a new and unusual concept cell phone that runs on alcohol! Well, in a way it does, and not like Futurama’s Bender does either, from the future though he may be. Cheers (the cell phone) draws its power from an alcohol cell that is said to be more energy efficient than regular batteries. The design of the phone is meant to ape that of old-time hip flasks, so it’s recommended you keep your phone and your flask in different pockets. Driving while talking on Cheers may be legal but it could draw unwelcome attention from assorted badge-wearing types who might wonder why you’re drinking through your ear.

Thinking of holding off on the purchase of a new cell phone until one or more of these cool concepts hits the retail shelves? Think again – concept cell phones work well as test-beds for new technologies and sounding boards for innovative new designs. You might not see these exact phones in the store some day but their futuristic features are well on the way. Buy now or bide your time – it’s your call.