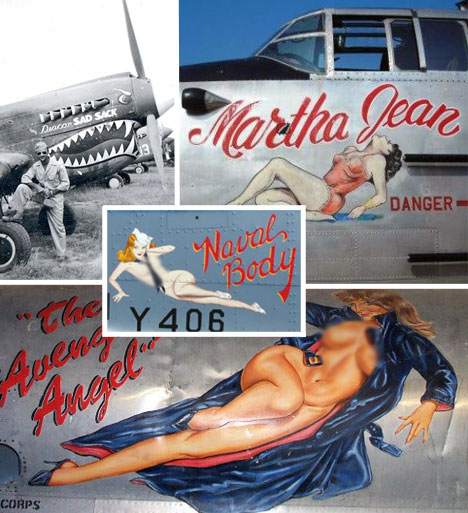 Decorating military planes with nose art has been a largely American tradition since WWI. During WWII and the Korean War, nose art surged in popularity with controversial images of cheesecake pinups reminiscent of Vargas girls, ferocious animals or scenes representing memories from home or the tour of duty.

The Girls of WWII 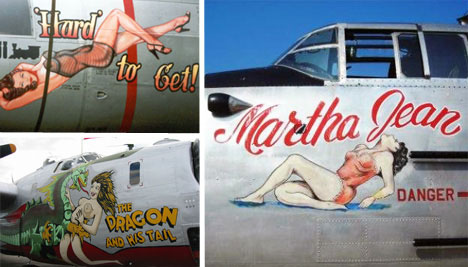 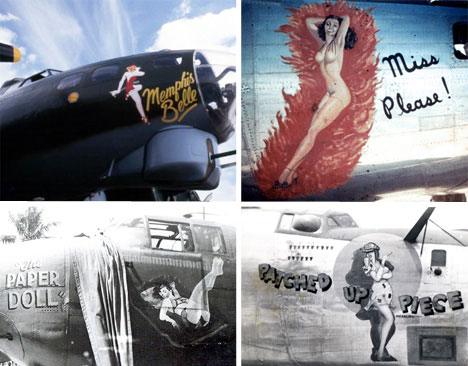 Artists often mimicked Vargas-style pinup art on the military aircraft they decorated. Sometimes the nose art was fashioned or named after a pilot’s sweetheart back home, but fantasy girls were far more popular.

The B-17 Flying Fortress Sally B. doubled as “Memphis Belle” in the 1991 film by the same name. To save money during the production of the film, one side of the plane remained Sally B., while the other side was dolled up as Memphis Belle for the movie. 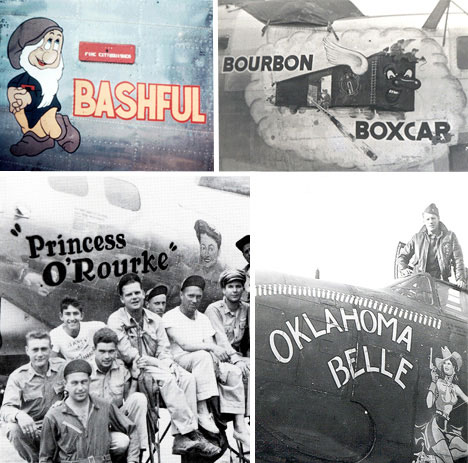 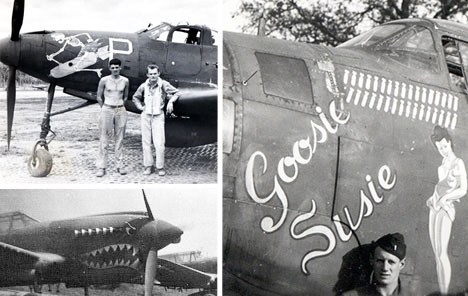 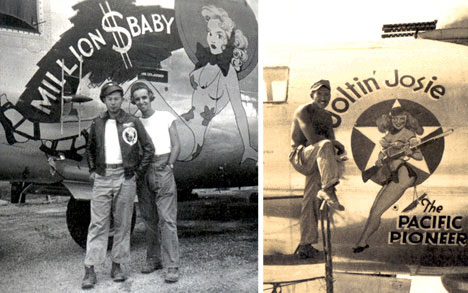 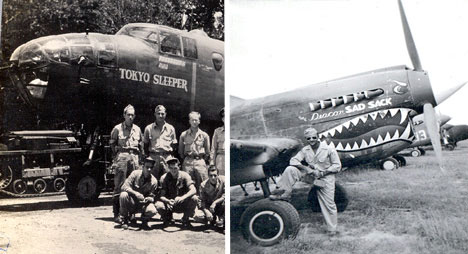 Although the B-17 is the plane most people think of as the standard WWII bomber, there were actually more B-24s in service. The B-24 had a long range and carried more bombers, but was much less attractive than the B-17. Million Dollar Baby’s name referred to the fact that during the war, the U.S. government paid $1 million for each B-29. Many of the B-29s were decorated with nose art in a variation of the Million Dollar Baby theme. Other bombers had nose art meant to look intimidating to enemies or names and mascots with sentimental value to the crew. 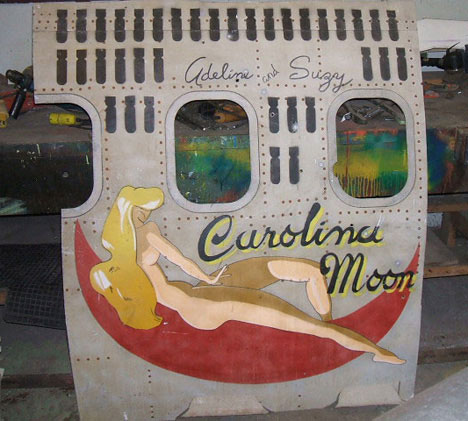 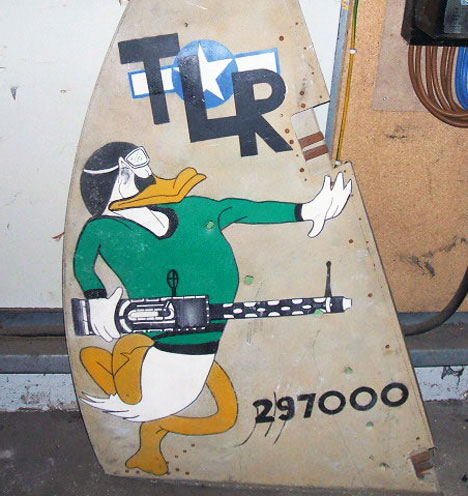 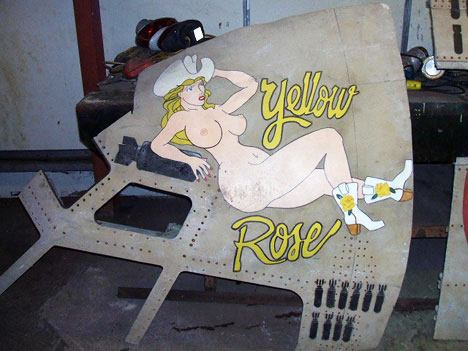 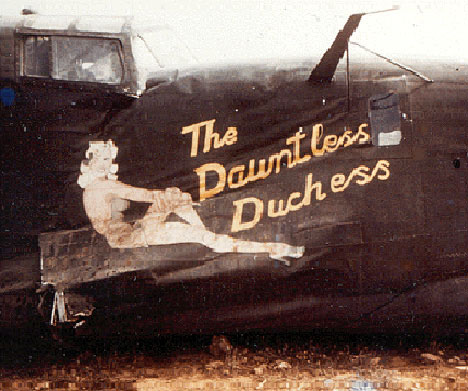 Military aircraft nose art is part of American history and is valuable for collectors. Much of it was lost during WWII and the Korean War. For instance, the image of “Miss Please” shown above with the girls of WWII is the only existing photograph of the artwork. This B24 aircraft was shot down over Yugoslavia on October 14, 1944. 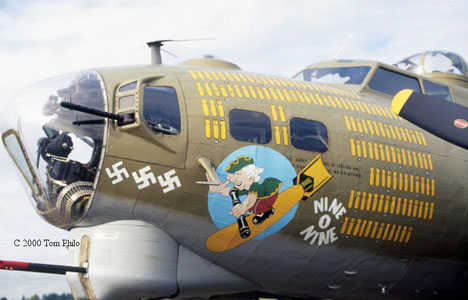 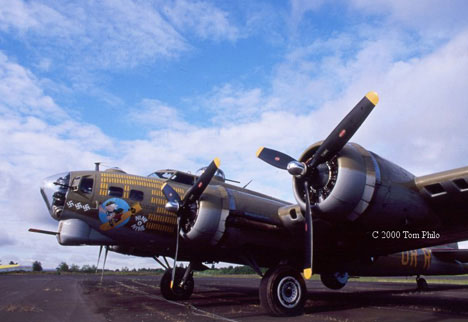 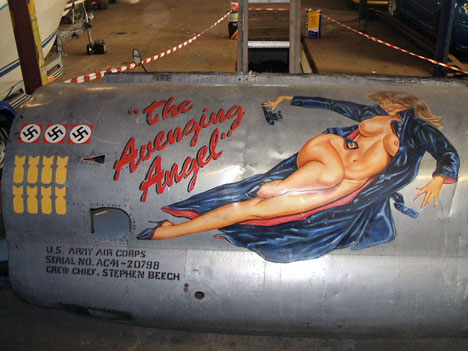 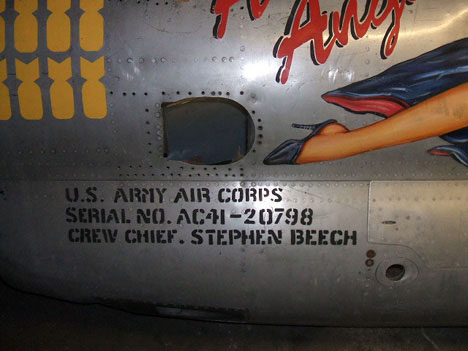 The nose artwork was sometimes bartered and traded for, as there was no budget for decorating the planes during the wars. The nose artwork on Joltin’ Josie was said to have been painted for a 5th of liquor. Although the most notable nose art was displayed on military planes during WWII and the Korean War, the tradition is still alive today, although with far more politically correct themes. Those who are fortunate enough own pieces of original WWII-era nose art work to preserve this bit of Americana and the history behind it.