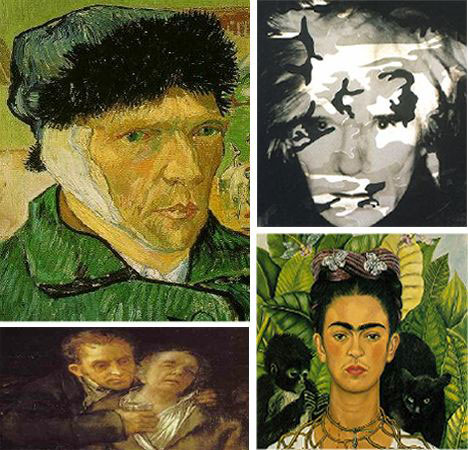 Its a rare artist that hasn’t at one time or another attempted a self-portrait. Sometimes its for the most obvious reason, that in painting himself he has a ready, willing and free model. At other times artists may use self-portraits to advertise their skills, practice their craft, explore some inner turmoil or stake a place in history. Whatever reason the artist might think he had for the painting though, with art as with writing, the act of creation always reveals something about the creator. Whether its the unusual yellow ambience of a Van Gogh or the isolation of Hitlers self-portrait its always possible to learn a little more about the artist by reading between the brush-strokes. 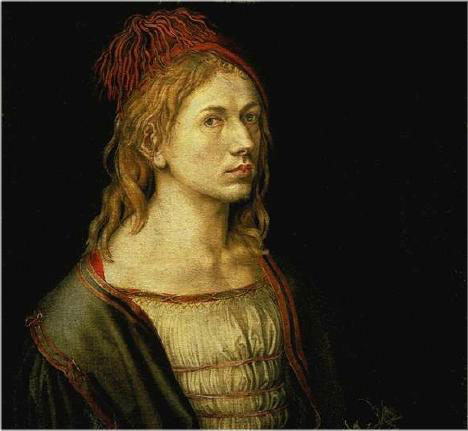 The German painter Albrecht Durer was perhaps the first really prolific self-portraitist, producing at least twelve images of himself, including three oil portraits, and figures in four altar pieces. He was something of a child prodigy, painting from an early age, and by his twenties was selling his works all over Europe. He was highly conscious of his public image and reputation and I believe we can see that in this self-portrait which depicts him in an idealized way, elaborately groomed and dressed in the very latest Italian fashion to demonstrate to the world his international success. Although he was only a young man at the time, he was clearly confident of his talent and aiming to go far. 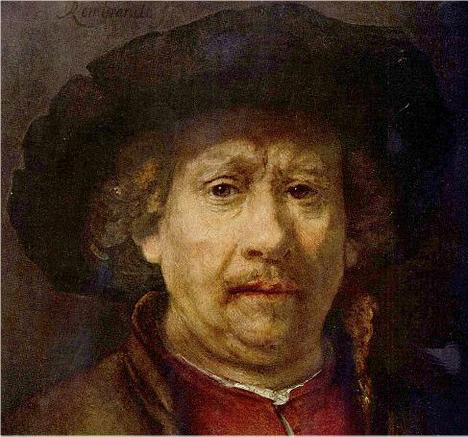 The Dutch artist Rembrandt was also a prolific painter of self-portraits. At one time about ninety paintings were counted as Rembrandt self-portraits, but it is now known that he had his students copy his own self-portraits as part of their training. Art experts currently believe that he was responsible for over forty paintings, as well as a few drawings and thirty-one etchings, which is still pretty impressive. An interesting aspect of Rembrandt’s self-portraits, other than their undoubted quality, is what we can discover in their sheer number and time-span. They record his progress from an uncertain young man, through his time as a very successful portrait-painter in the 1630s, to the later troubled but powerful self-portraits of his old age. 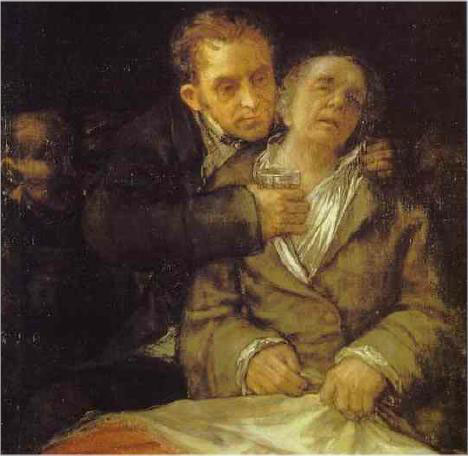 The Spanish painter Goya occupies a unique place in art history, regarded by many as the last of the old masters and first of the moderns. He was a court painter to the Spanish Crown and a chronicler of history, who was bold in handling color and regarded as daring for the subversive elements in his art. In later years he suffered physical and mental breakdown, complaining of deafness, poor vision and loss of balance. Postmortem diagnosis pointed toward possible paranoid dementia due to unknown brain trauma. This self-portrait of him with Dr Arrieta reflects his troubled state of mind, with its themes of illness and mortality. 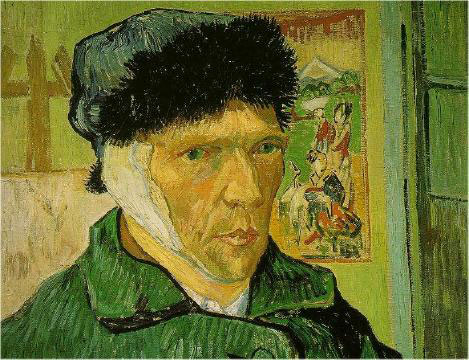 Think about a ‘tormented artist’ and one of the first names that come to mind is likely to be Van Gogh. This Dutch post-impressionist is probably as well known for the ‘cutting-his-own-ear-off’ incident (which may or may not have happened as reported) as he is for his considerable body of work. One of the characteristics of his paintings is the sunny yellow ambiance that infuses them. Van Gogh indulged heavy in absinthe, a drink known to produce ‘yellow vision’ in addicts. The drug digitalis, which he is also believed to have taken, would also produce ‘yellow vision’. Interestingly and strangely enough, Van Gogh never seems to look directly at his ‘audience’ in his self-portraits. 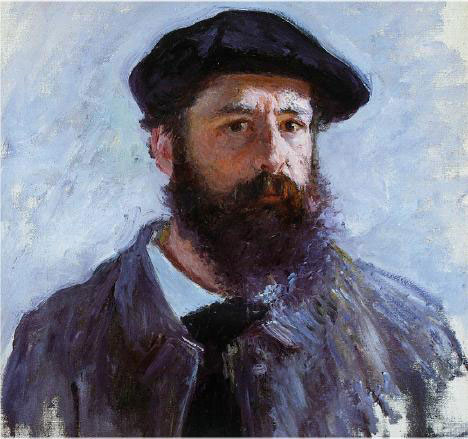 Monet was a founder of the French impressionist style of painting, which is based on the artist conveying his perceptions of the subject rather than a precise likeness. The term ‘impressionism’ is in fact derived from the title of Monet’s painting ‘Impression, Sunrise’. As his career developed Monet was plagued by cataracts in his eyes. These reduce vision and can make things appear blurry and ‘out-of-focus’. It is hard to know how much his signature style of softly blurred images owes to artistic vision and how much to his cataract problems. In later life was he interpreting the world in an impressionistic way or simply reflecting the distorted version of it that he actually saw ? 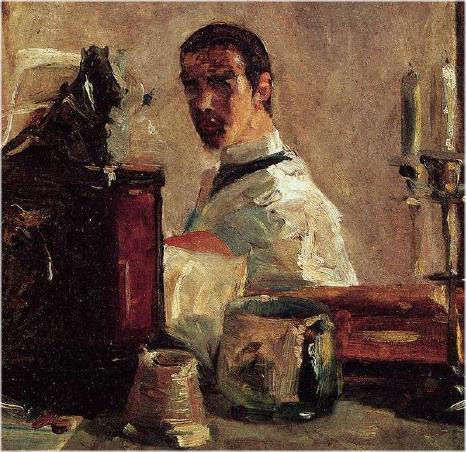 Henri Marie Raymond de Toulouse-Lautrec-Monfa or simply Henri de Toulouse-Lautrec was a French artist famous for his depictions of the theatrical and decadent life of fin de siecle Paris. Looking at this self-portrait you see in the mirror the reflection of a young man, handsome and apparently normal in all ways that are visible. The reality was somewhat different. As a child he fractured both thigh bones and the breaks did not heal properly. His legs ceased to grow, so that as an adult he was only 5 ft tall, with an adult-sized torso but child-sized legs which were only 27.5 in long. Ironically, in view of his famous preoccupation with the sexuality of the Folies Bergere, he apparently had hyper-trophied genitals too. 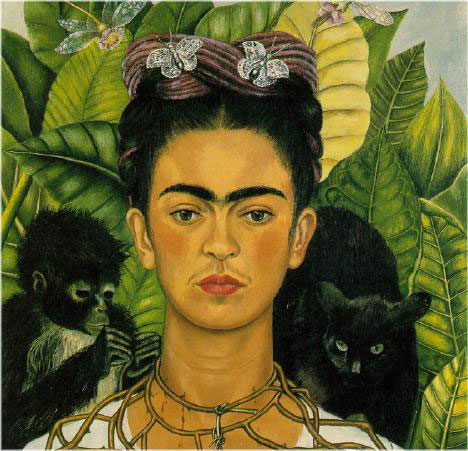 When looking at this self-portrait, the pain is evident in her face. Pain and determination are both things that characterized this artist’s difficult life. Magdalena Carmen Frida Kahlo y Calderón spent many years bedridden following a terrible accident, with only herself for a model. Despite her handicaps she painted prolifically using vibrant colors in a unique style influenced by the indigenous cultures of Mexico and European influences including Realism, Symbolism and Surrealism. Many of her works are self-portraits that symbolically express her own pain and sexuality. The 50 or so of them include many of herself from the waist up, and also some nightmarish representations which symbolize her physical sufferings. She insisted, “I never painted dreams. I painted my own reality.” 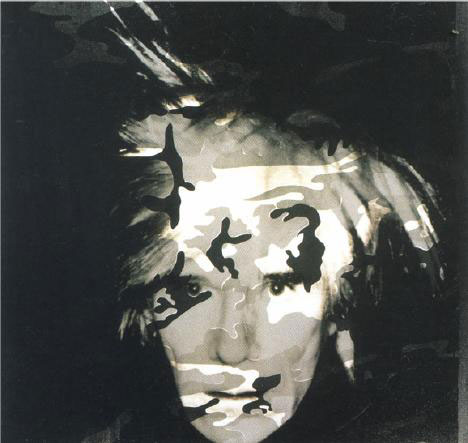 Andy Warhol, darling of the 1960s New York art scene and prince of ‘pop art’, was a self-styled enigma who hid himself away in the full glare of the worlds media . Though he courted publicity skilfully and at times obsessionally, he was an intensely private person. In manipulating the media he was a master of misdirection and ‘playing dumb’, always claiming that all all anyone needed to know about him and his works was already there, “on the surface”. Its not surprising then that what I see in this self-portrait is an artist who, even while saying to the world ‘hey this is me’, still attempts to camouflage and obscure the reality. 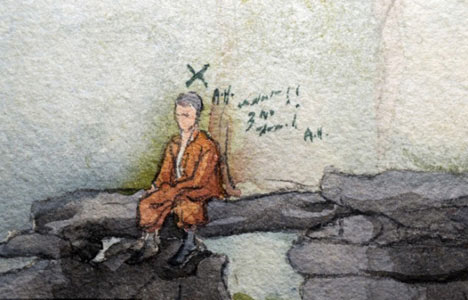 And here, as they say, is a man who needs no introduction. I think we’re all pretty familiar with his main claims to fame (or infamy) but one of his lesser known aspirations was to be an artist. This watercolor is thought to be the earliest self-portrait by Adolf Hitler, painted in 1910 when the future Fuhrer was 21 and struggling to make his mark on the art world. The figure is strangely anonymous, with no nose or mouth yet Hitler was keen to identify himself by daubing a cross and the initials AH above it. The loneliness of someone who cannot connect with the world around him or the people in it rests on the surface of the self-portrait. Perhaps this was just a romantic vision Hitler had of himself, or perhaps it was a genuine expression of a deeper alienation.