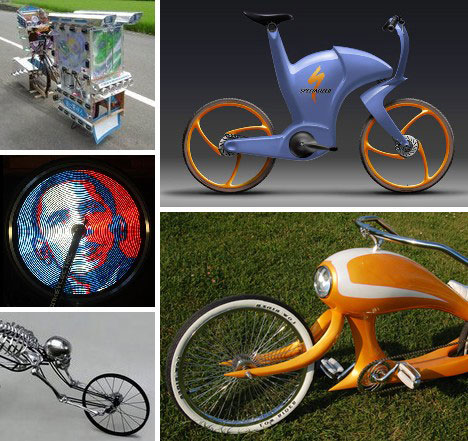 Pimp my bike? It’s more common then you think. Artistically modified bicycles are the coolest things on two wheels these days. Here are 15 of the weirdest, wildest, most outrageous bikes ever to pop a sweet jump. 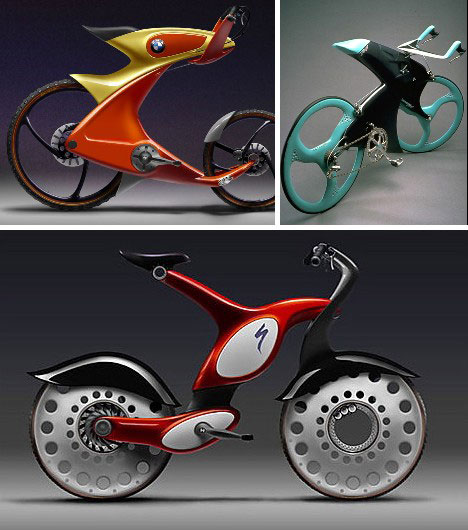 (images via: MillionFace and Serotta)

The futuristic bikes above purport to be BMW concepts though only one bears the BMW roundel, another is marked “Ultegra” and most of the rest carry the “Specialized” label. No matter – let’s just hope they go into production at some point! 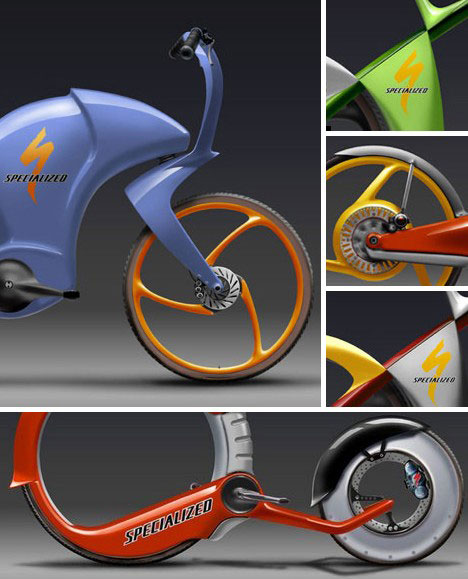 (images via: MillionFace and Serotta)

Above are a few more cool concept bikes from the Specialized group, a well-spoken selection though few actually have spokes in their wheels. Wonder where the baseball card goes?

Spinning Wheels, Got To Go ‘Round 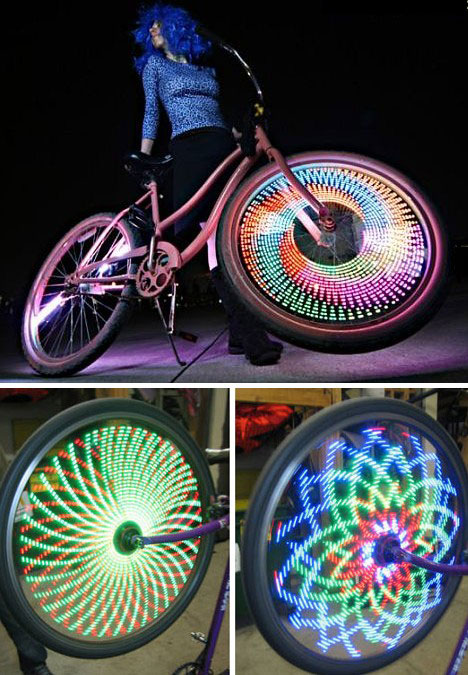 (images via: Geekologie and BoingBoing Gadgets) 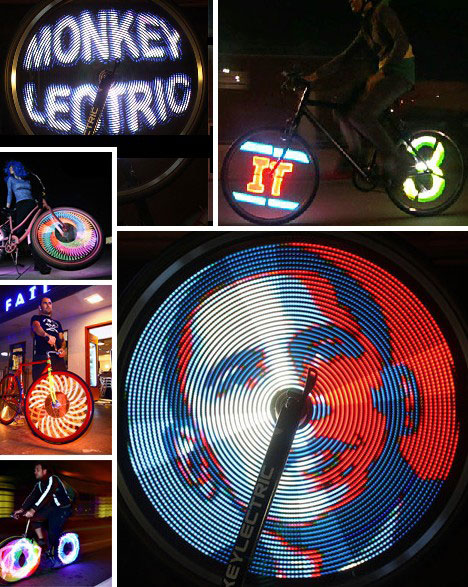 (images via: MonkeyLectric and PaulTech Network)

Want to display static ads in LED light as you pedal through town? Anyone? Well just in case, MonkeyLectric has gone ape with what they modestly call “the most advanced rotating wheel display system in the world.” From the looks of the MonkeyLectric Video Pro M464Q, we believe them. Stabilized solid images, full color motion video and wireless control come standard and the folks at MonkeyLectric will custom-build a system to suit your needs. All this doesn’t come cheap – systems START in the $2,000 range – but for commercial applications it could be worth the expense to get noticed. 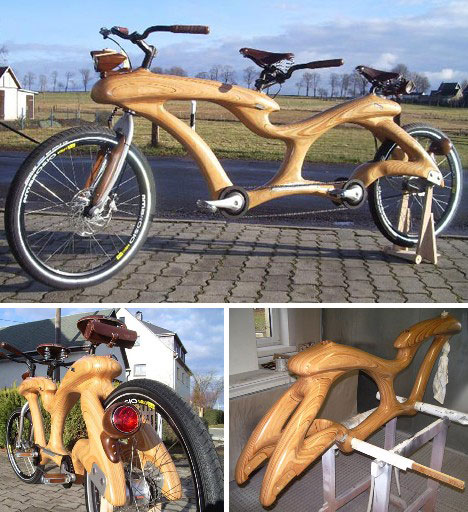 A-frames are made of wood; so are picture frames, so why not bicycle frames? Well, plenty of reasons… but none of them stood in the way of German timber technology student Jens Eichler. Applying his knowledge of wood along with a heaping helping of phenol-resorcinol glue, Eichler crafted one of the most beautiful bikes anyone’s ever seen. Renovatia is made of Beech plywood and is, of all things, a tandem bicycle. 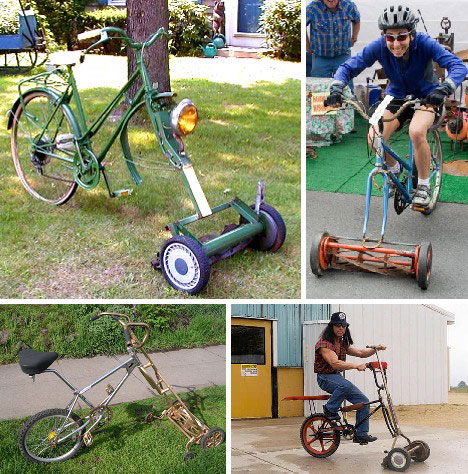 What do you get when you cross a bicycle with a reel mower? A reel strange bike… but not so strange that more than a few folks have cobbled such a beast together. Though these bike-riding mowers may look all wrong, they do have a lot of positives: they’re eco-friendly, exercise-inducing and never fail to provoke a grin (or a look of extreme puzzlement). 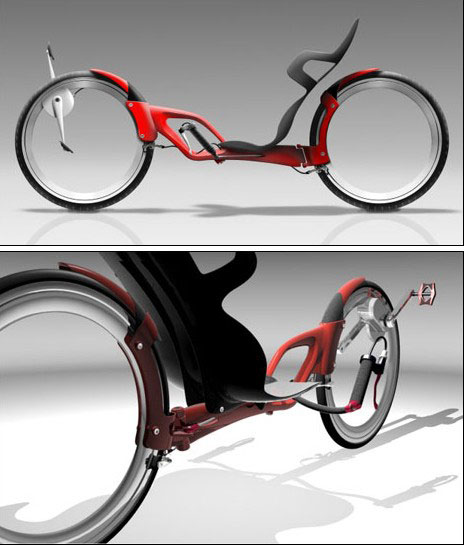 (images via: TrendsUpdates and Coroflot)

Recumbent bikes are typically form-follows-function designs that leave little room for artistic expression. Not so this sleek & sexy design prototype by College for Creative Studies graduate Mathew Zurlinden, which shatters the stereotype by pushing the envelope as far as it will stretch. The Legato GT features hubless wheels, Shimano Dura-Ace brakes and an Infina-Gear CVT Transmission that makes mountains into molehills. Definitely not your grandfather’s recliner!

Not Just Another Tequila Sunrise 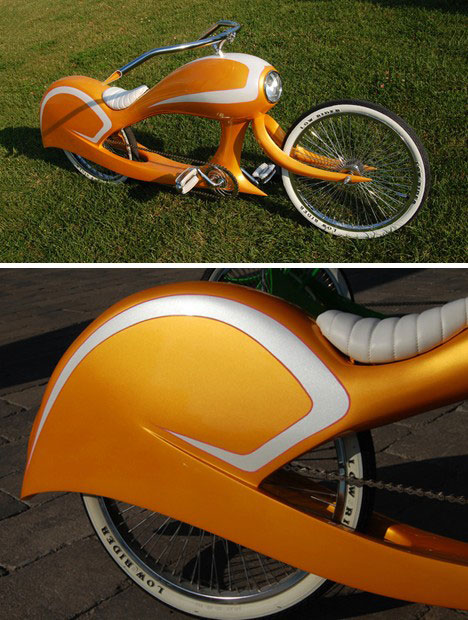 (images via: Oddity Central and Tuvie)

Jason Battersby has created a couple of wheeled wonders he calls Tequila Sunrise and Eye Candy. The former, pictured above, is a retro-futuristic throwback to the fabulous fifties complete with cyclops headlight and a skirted rear fender. Malt shop, here we come! 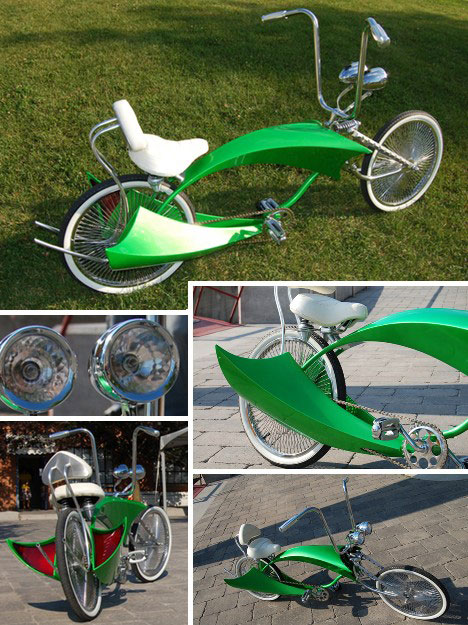 (images via: Oddity Central and Tuvie)

With Eye Candy, Jason Battersby takes a different design tack that recalls sixties Mustang bikes, metal-flake dune buggies and the original Batmobile. These bike designs aren’t your typical “look but don’t touch” fragile fabrications, either. Confirms Battersby, “Both bicycles are fully ride-able. I have rode both bicycles without any problems.” Surprised Torontonians, not so much – these beauteous bikes have the power to induce instant whiplash in onlookers. 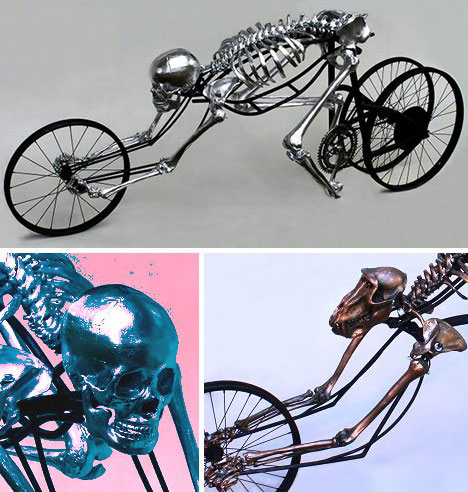 (images via: Tech Chee and Gizmodo)

Jud Turner put what seems to be an obvious Terminator obsession to work when creating the Bio-Cycle. The 60-inch long bike was built expressly for the February 2008 “Different Spokes” invitational sculpture show in Salem, Oregon and is made of welded steel, found objects and mixed media. An earlier version had rubber skin, we spotted them easy… OK, not really but you see where I’m going with this. As for Termin… that is, Turner, he’s revisited the art of bare-bones bicycle building with the R-evolve bike. So easy even a caveman can ride it. 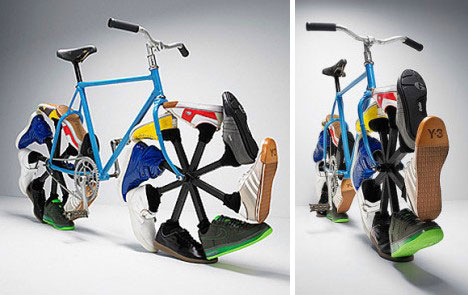 The Walking Bike by Max Wright Design is a shoe-in for weirdest bike honors – and for garnering the most bad puns. Each of the bike’s wheels feature 8 pairs of assorted athletic shoes, which should leave very confusing footprints in snow or sand. The following short video of the “Superted” walking bike proves that when it comes to long-distance running, one should just run: 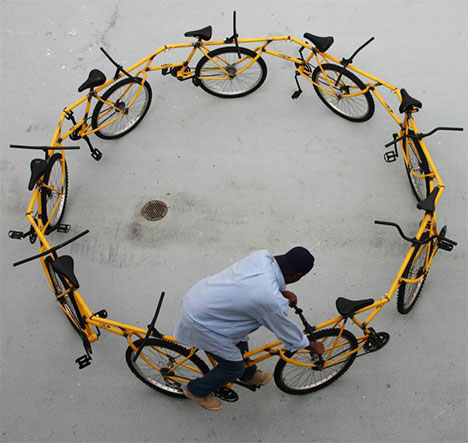 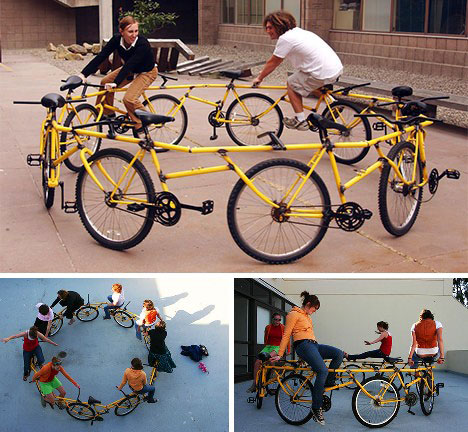 (images via: Treehugger and Robert Wechsler)

Even extra-strength Midol isn’t enough to cure the Vicious Cycle; circular reasoning of the bicycling kind. The ride to nowhere was crafted by UCSB design student Robert Wechsler for no apparent reason except that he had 9 bikes lying around and didn’t want to just junk them. Wechsler likes to assemble the 12-foot diameter mega-bike at different locations and leave it for passersby to amuse themselves, recorded merry-go-round music optional. 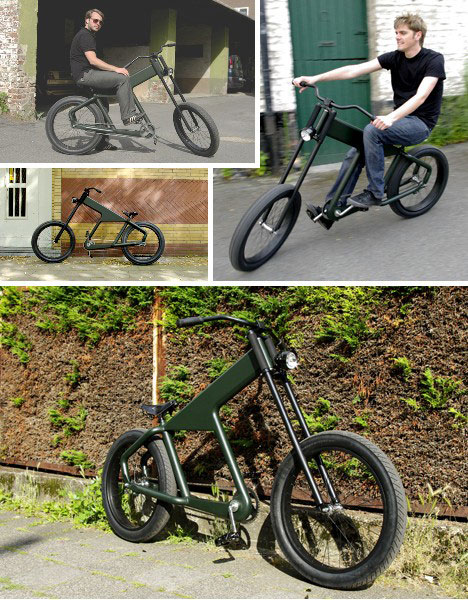 Sven Fischer from Team Tentakulus whipped up the ominous, jet black Shocker Chopper bike, probably using the Hammer of Thor on an anvil stolen from Satan himself. Info at the Team Tentakulus website is in German and that’s somehow appropriate as this is Der Götterdämmerung of bikes – ride this to school and even the meekest nerd will command instant respect. 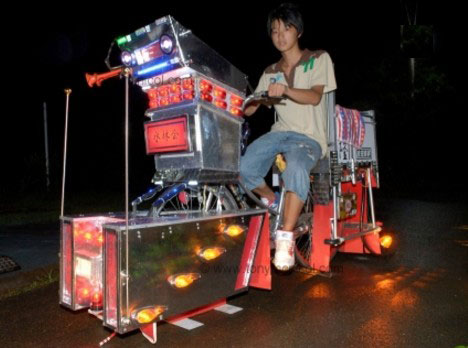 Japanese kids have been doing up their bikes dekochari-style for decades, and they’ve got it down to – literally – a fine art. Dekochari (deko = decoration, chari = bicycle) involves pimping a bike to the max, often to the point where it’s hard to know where the decoration ends and the bike begins. Sheet metal, lights (and lots of them), wild paint jobs and even chromed bumpers make the wildest dekochari bikes look like shrunken semi-trailers. Which is the idea, actually. 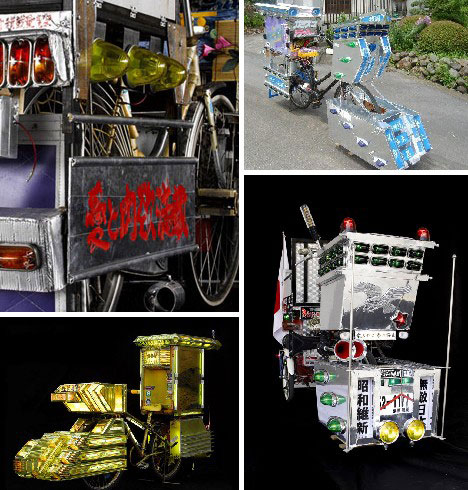 Here’s a video of dekochari bikes after dark, backed up musically by “Ichiban-boshi Blues” (by Bunta Sugawara and Kinya Aikawa). This theme song from the Torakku Yarou movie series helped ignite Japan’s dekochari craze way back in the 1970s:

Bicycles are looking better than ever in more ways than one. In fact, compared to gas guzzling, bailout bankrupted, ever more expensive automobiles, their appeal has never been more timely. Even so, a little (or a lot) of artistic customizing just makes a good thing better. Yes, wheelie.