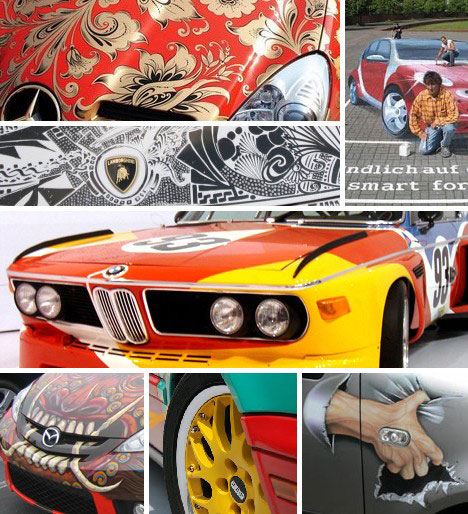 Our cars, ourselves – and if tattooing our bodies is desirable, arting up our cars is as well. These 15 artistic automotive expressions illustrate how some are driven to put a personal stamp on the steel skins of the 4-wheeled objects of our affection. 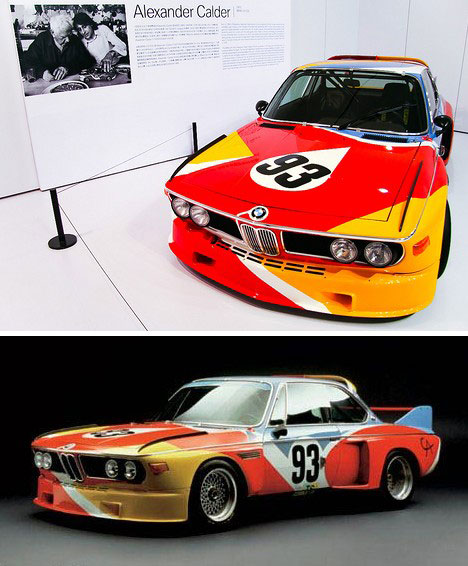 It seems only natural that an artist known for creating mobiles would choose the ultimate mobile as his medium. Such is the case with Alexander Calder, commissioned by Herve Poulain to give his 1975 BMW 3.0 CSL “Batmobile” a new and distinctive look. Poulain, an art auctioneer when he wasn’t racing at Le Mans and other touring car circuits, took his Calder-ized Bimmer racing. BMW bigwigs were so impressed that the German automaker decided to commission more Art Cars in the Calder mode. 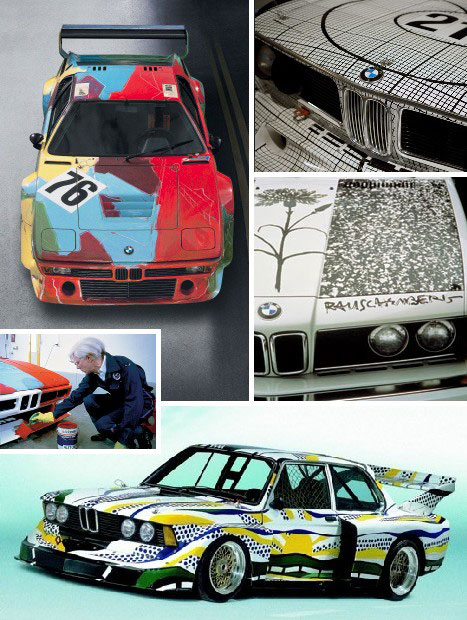 (images via: Look Into My Owl, Daylife and Autofiends)

Art ain’t cheap – at least corporate art sure isn’t, and when you’re BMW you can afford to bring cool cars and famous artists together. A unique series of four BMW Art Cars featured acclaimed artists like Andy Warhol, Frank Stella, Roy Lichtenstein and Robert Rauschenberg doing what they do best on sheet metal canvasses. 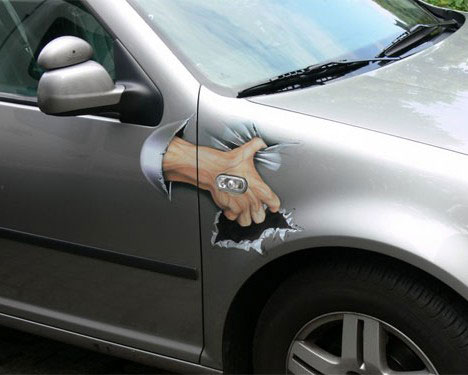 Someone is driving this rolling statement of raw power around Berlin, Germany. Combining classic trompe l’oeil with a dash of surrealism, this is one piece of car art that’s a hands down winner. 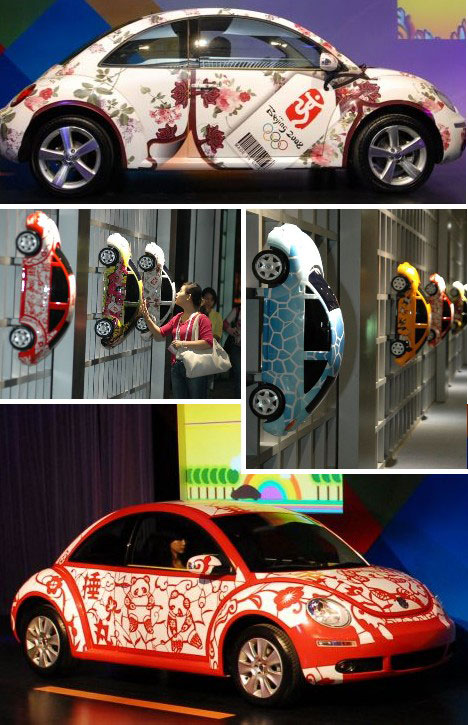 As a great sage and eminent pitchman once said, “You know the Germans make good stuff”. They also have a thing for making their cars stand out in, ahem, unusual ways. Take this brace of Beetles, for instance, designed for the Volkswagen Olympic Art Car Campaign. Both full-size cars and fourteen 1:4 scale New Beetles were daubed up for display in a traveling show to help promote the 2008 Beijing Olympics. 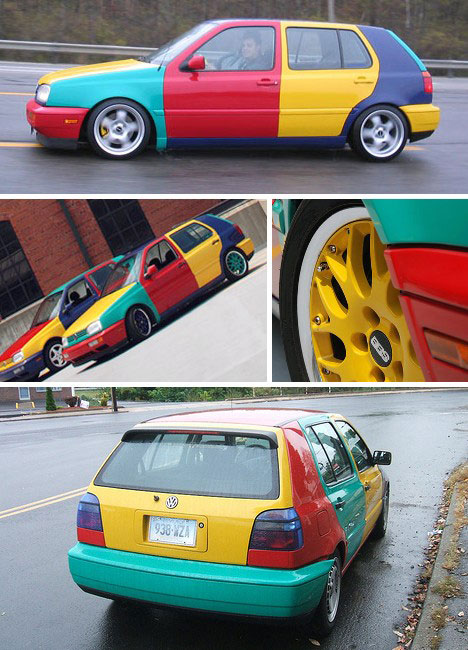 (images via: VW Vortex and N1yln)

Any color you like, as long as it’s 4 colors… on each car. That’s what you’d get if you ordered a 1996 Harlequin Golf, one of the few painted art cars built for sale to the general public. Not al that many WERE built – 264 to be exact – but if you’ve ever seen a Golf with what seem to be mismatched body panels then that’s one mystery solved. If you actually own a Harlequin Golf, be sure to join the VW Golf Harlequin registry formed by Ross VW. Just 91 original Harlequins have signed up, plus one Harlequin wannabe in Japan who painted his regulation Golf in Ginster Yellow, Tornado Red, Chagall Blue and Pistachio Green just for the hell of it. 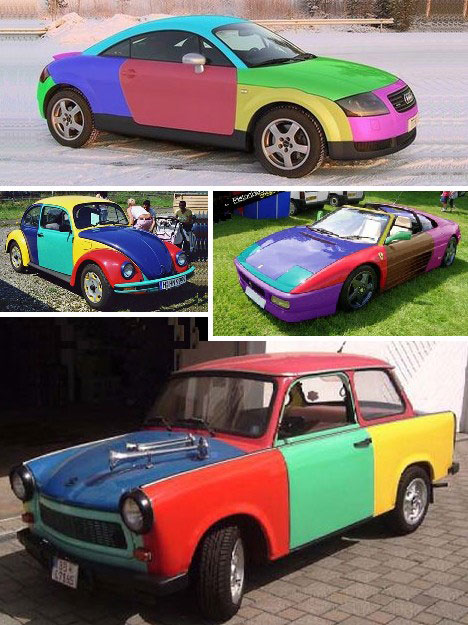 Some folks really like the Harlequin paint scheme, so much that they’ll modify their own rides just to get that eye-catching, schizoid look. So-called Harlequin Wannabes are few and far between but if you do see one it tends to stick in your memory – which is likely what the owners have in mind. 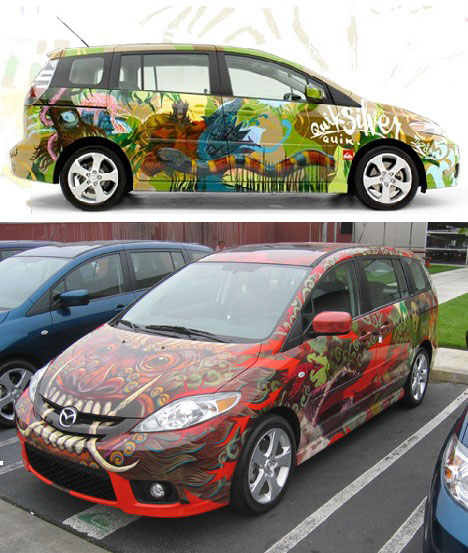 Mazda took a page from BWM with a gnarly series of art cars designed to promote the 2005 Mazda 5. Partnering up with west coast surfwear & surfware seller Quiksilver, the wild paint-jobs on the 5’s are meant to evoke the free-wheeling aesthetic of the surfing lifestyle. 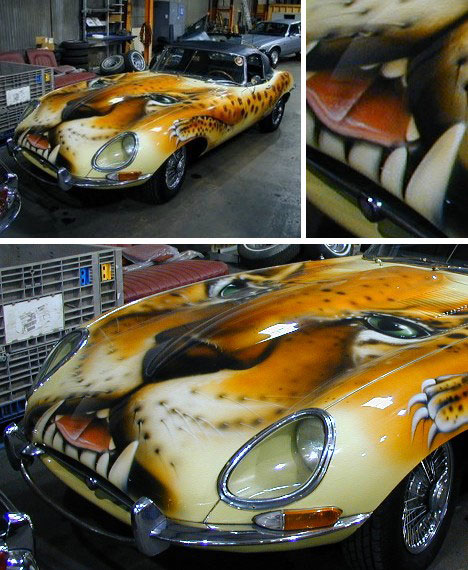 You might ask, who would take a classic Jaguar E-Type and paint it up to look like, well, a jaguar? Not many would today, but this purr-fect paint job was applied way back in 1961 when the first E-Types arrived at American Jaguar dealerships. One such dealer thought it would be a good idea to tart up one of his stock and park it in the showroom as a promotional gimmick. It appears this car has been mildly restored over the years but its wild, animalistic “skin” still looks fresh. 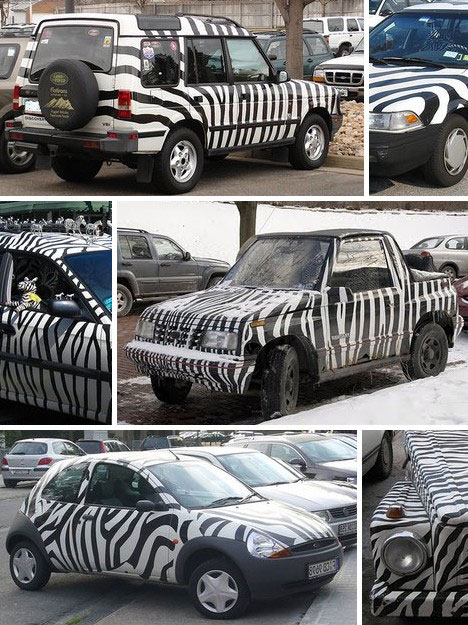 Staying with the animal kingdom, creatures like zebras use their unique black & white striped coats to help them blend into the background. Oddly, cars painted in a similar style stick out like a sore thumb! It remains to be seen if driving a car with stripes helps you find better parking spots. 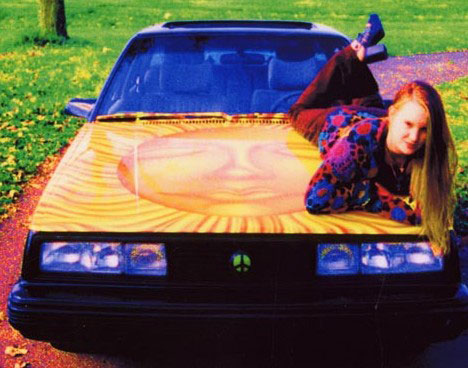 The Kozmic Dream Machine is one of three – yes, three – painted art cars conceived and executed by a young woman who believes “Creating art fills me with an unsurpassable joy. The psychedelic and surreal qualities of my work encourage the viewer to explore other places beyond their imagination.” 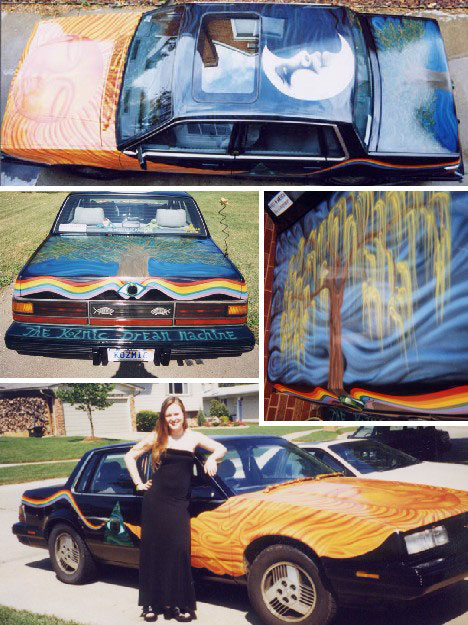 No arguments there, nor with our contention that if a well-worn Pontiac 6000 could dream, it would dream kozmic. 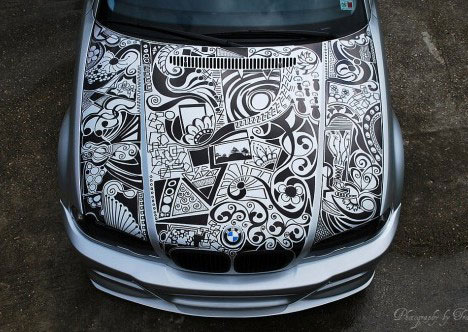 Normally, taking a Sharpie to your bright, shiny new sports car would result in a trip to the local asylum and later on, the 5th circle of Hell. For a member of the E46Fanatics forum on the other hand, it was a quest not unlike a mission from God. The exquisitely hand-decorated 2001 BMW 330ci shown above is the result of 12 hours of non-stop drawing, literally “until there was no more metal to draw on.” 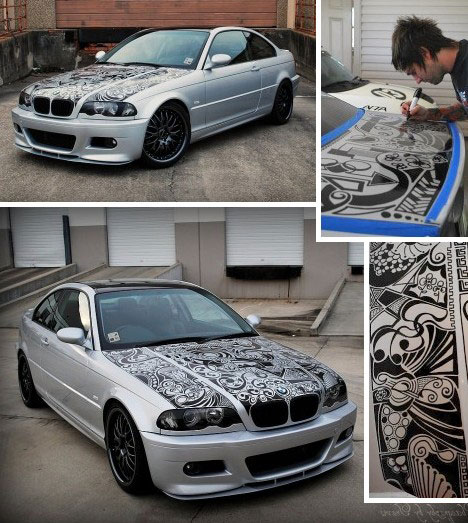 What a tragedy, then, that about an hour after the car was deemed complete, the car was vandalized in a restaurant parking lot and a significant portion of the art was destroyed. 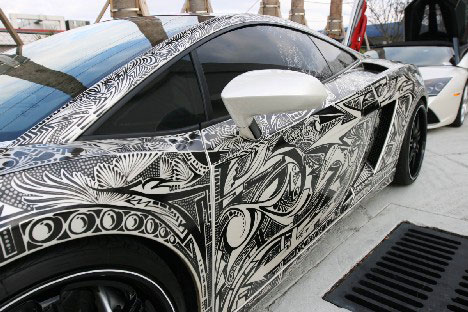 Some people yearn to ride in a Lamborghini, others prefer to write on one. The Sharpie Lamborghini is what happens when you combine Sharpies, Espresso and OCD – LOTS of each – and then pour the resulting goop all over a fresh from the factory Lamborghini Gallardo. 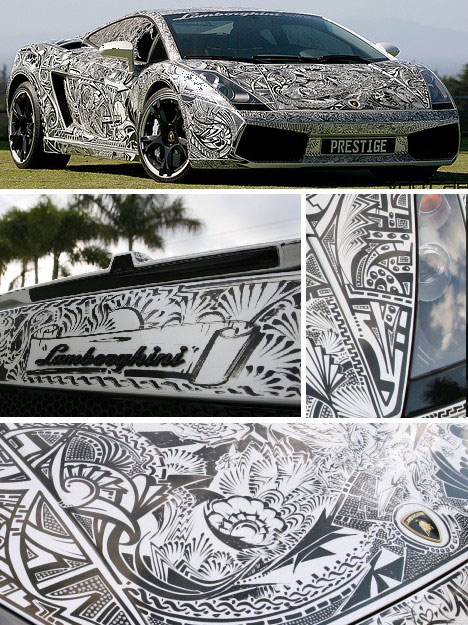 (images via: Lysergid and Automotive Addicts)

In actuality the brilliant creation of artist Jona Cerwinske, this one-of-a-kind Lambo has definitely got the write stuff. 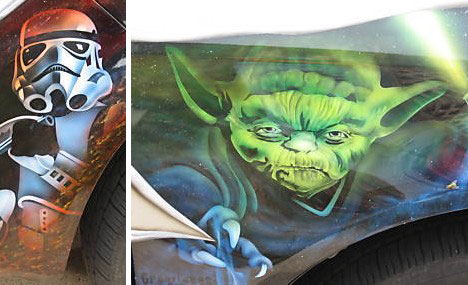 A long time ago, in a galaxy far far away… in this version it’s not a Galaxie, but a Chevy Cobalt done up like a rolling tribute to the franchise that launched a thousand geeks to film fandom. Although stunningly executed and faithful to Lucasarts, er, arts, this cinematic sensation is the ultimate babe magnet… that unfortunately happens to be set on “repulse”. 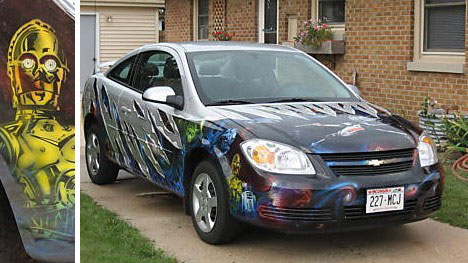 In the image above you can just make out the window well from Mom’s basement. 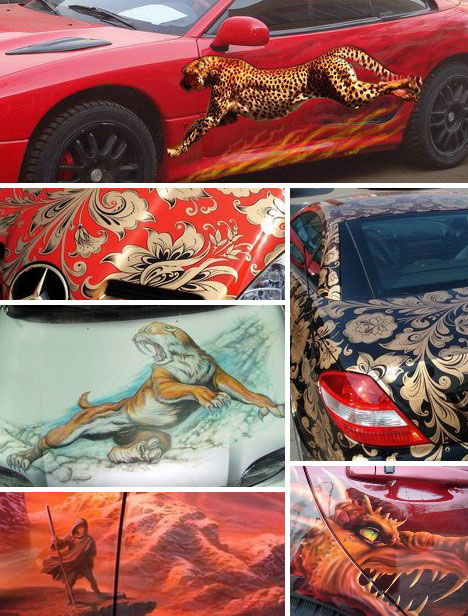 You just can’t top the Russians when it comes to painting cars in a, shall we say, exuberant fashion. Maybe it’s the vodka, maybe it’s an overreaction to the lack of Soviet-style repression, who can say? Whatever the reason, Russia rules the roost – where else (outside of Jersey) will you find a cheetah airbrushed onto a red Japanese sports coupe? 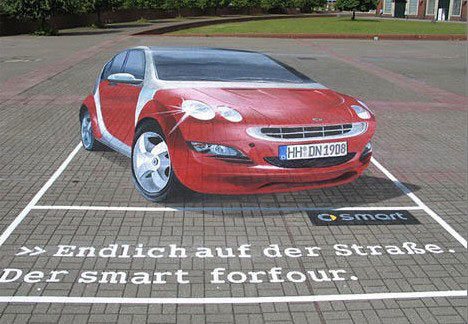 (images via: Buckets and Spades and Paradoxoff)

3D graffiti artists Manfred Stader and Edgar Müller painted the Smart Car above… well, in a matter of speaking. They DID paint it – onto a cobblestone parking lot. Stader and Müller have done this kind of thing before, though the Smart piece may be their most famous car-related effort. 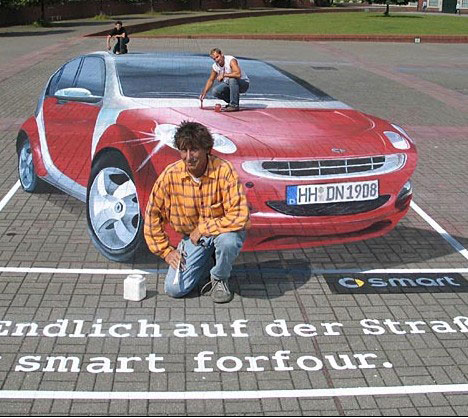 How do they do it? See above, at the risk of deconstructing the illusion.

They say that beauty is only skin deep and that may be the case with most of these artfully painted cars – not that there’s anything wrong with that, just the opposite in fact. Car art takes many shapes and forms but painted cars exist in a rarefied realm rife with risk and rust. Enjoy them while you can.