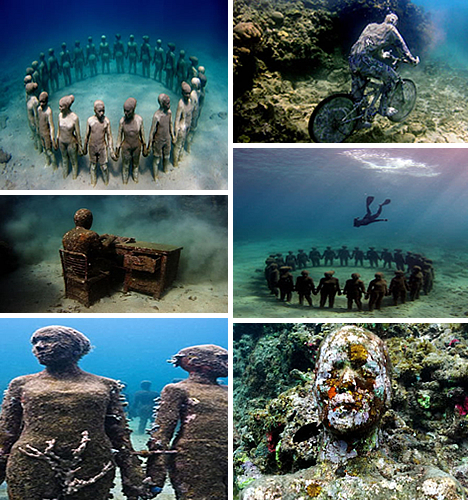 Sculptures decorate landscapes, museums, and buildings, but water covers the majority of the Earth’s surface thus making it the world’s largest art gallery. The ocean is filled with mystery and an underwater sculpture park only heightens the intricate secrets hiding beneath the depths. Artificial reefs disguised as sculptures appear different each moment to a diver’s view as sand shifts along the ocean floor, sunlight penetrates at different depths and angles, and turbulent water currents combine in a kaleidoscope effect to delight the senses. Here are 79 unique and awesome underwater sculptures, environmental art, to encourage the natural ecological process. 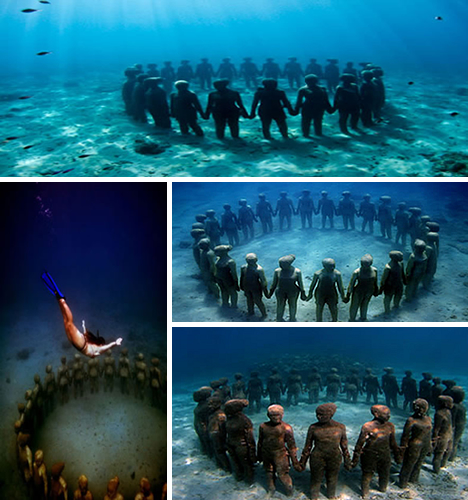 Like characters that step off the page of a good book, Jason de Caires Taylor’s underwater sculptures literally come to life. In Grenada, West Indies, 26 life-sized figures await divers to view them in their underwater playground. The Vicissitudes were cast from children with diverse ethnic backgrounds. These underwater kids stand united in a circle, holding hands. The Vicissitudes are both art and an enhancement the environment, inviting marine life to rebuild the reef. 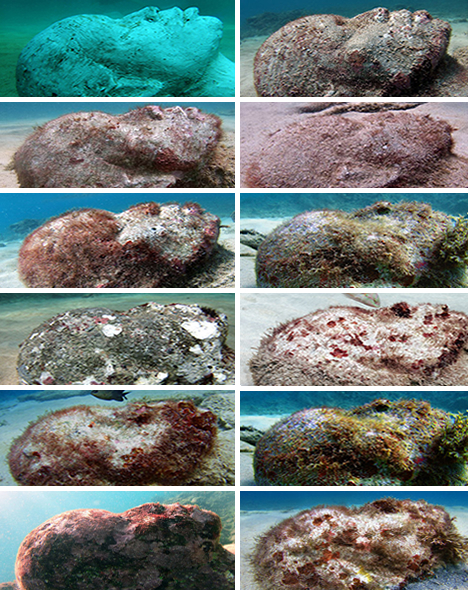 Over time, these artificial reefs attract coral growth which helps support a marine ecosystem. 40% of the coral reefs worldwide are already destroyed, increasing each day as a little more dies. One of the biggest benefits of artificial reefs is that they give natural reefs a chance to heal from the desecration by overfishing, ocean acidification, and mankind’s pollution. As the natural reefs repair and regenerate, these environmental art pieces transform, changing the shape of their environment, as well as changing the habitat for marine life. 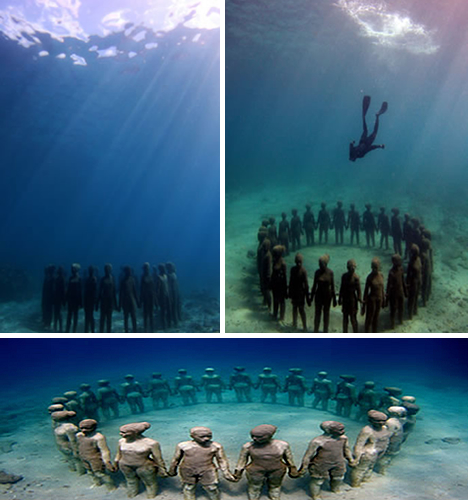 14 feet below the surface, the Vicissitudes seem to change, depending upon light and weather conditions, while their cement finish and chemical composition actively encourage the establishment of coral and marine life. The figures are in the shape of children not by mere chance, but because children are highly adaptable and naturally progress, shaped by their environment and social interaction. Children are the hope of the future, and may create a sustainable and well-managed environment for their future generations. 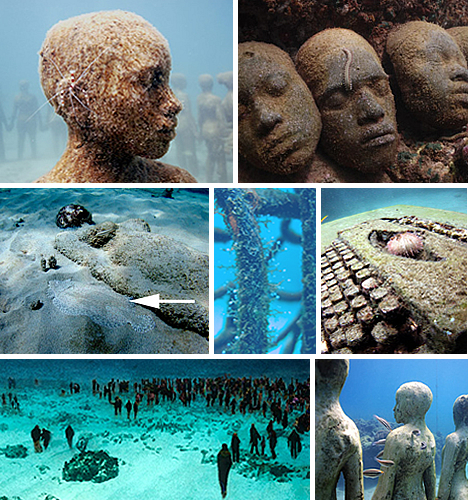 The creator of the world’s first underwater sculpture park, Taylor’s first artistic environmental masterpiece was ripped to shreds by a hurricane. His works include more than 65 underwater sculptures that are spread around the world in various areas. A new project near Cancun will have more than 400 new sculptures. These artificial reefs will provide an ideal habitat for filter feeding organisms, promoting the new growth and repair of a marine ecosystem.

The Fall From Grace 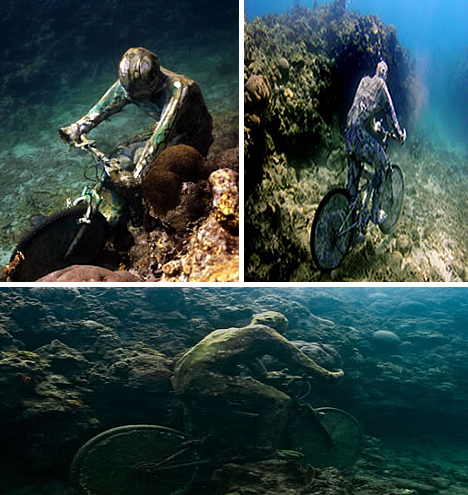 Underwater sculptures create a unique visual seascape which encourage the natural ecological process. Found a little over 21 feet below the surface, The Fall From Grace is a life-sized statue of a man on a bicycle. This sculpture is in the clear, shallow waters of West Indies, making it a delight for divers and snorkellers to behold. The bottom picture was taken after 8 months in the tropical waters of Grenada and nature has already started tweaking the artificial reef. 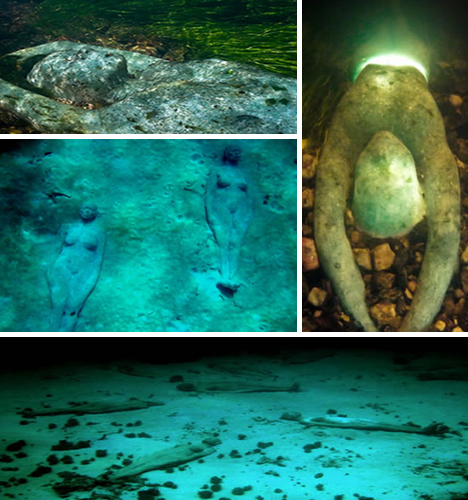 Alluvia consists of two female figures that were cast in cement and recycled glass resin. The top left and right pictures depict Alluvia which awaits at a depth of 3-6 feet in the Stour River of Canterbury, UK. These underwater sculptures lie along the river flow, submerged and fixed to the riverbed. In somewhat of the same theme of men and woman resting on the sea bed, the middle and bottom pictures are of Grace Reef. These statues can be found at a depth of 12 feet in Grenada, where the differing currents sometimes hide the collection of statues. At other times, Grace Reef figures are fully visible. 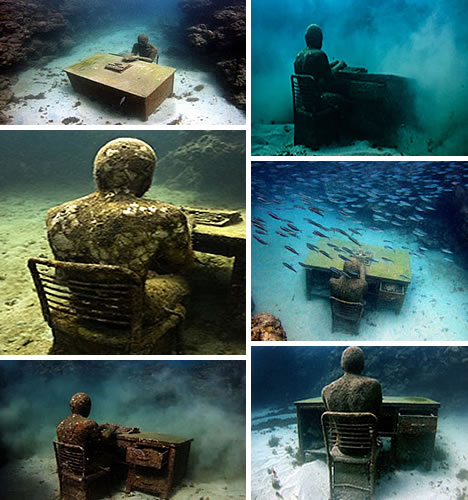 The Lost Correspondent portrays a man sitting at a desk with his typewriter. A collection of newspaper articles, dating back to the 1970s, covers the desktop. Some of these news stories report a time in Grenada’s history before the revolution. As this artificial reef changes with time, the man with his typewriter morph into a coral reef. 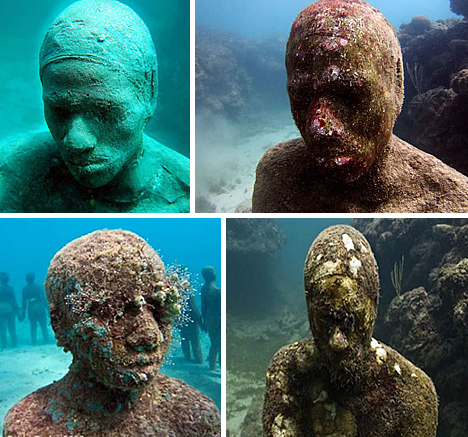 The sculpture waterpark figures weigh as much as 15 tons, but their destruction is a part of the point to these statues. As the pieces interact with their underwater environment, the art grows both more interesting and more complex. Slowly, the underwater children evolve from unique art designs to functioning and well-adapted members of a living underwater society. 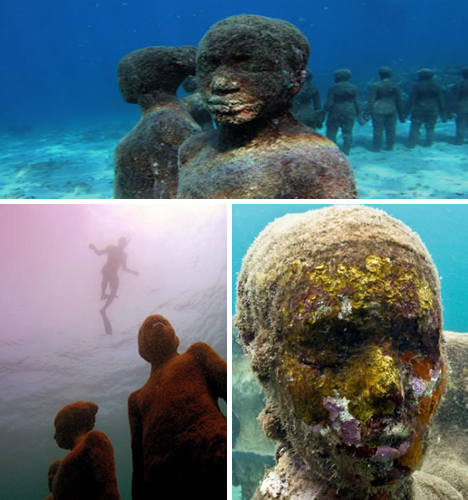 In a underwater playground, the Vicissitudes continue to adapt. The children change and grow, they evolve, into more of functioning unit in a marine society. These artistic works mature from one style of beauty and color to another. 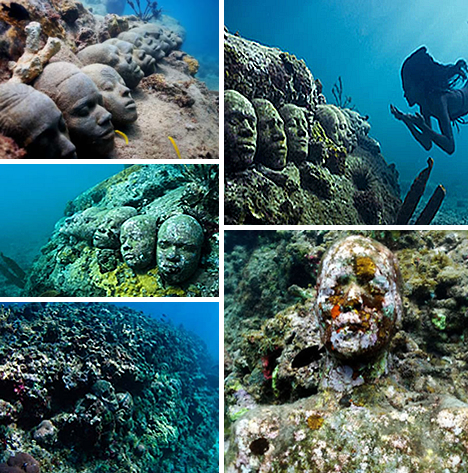 The TamCC project consists of 18 heads placed at a depth of 6 feet depth in Grenada. This artificial reef gives the natural reefs time to recuperate and rejuvenate. The images display the radical changes over time, from clearly defined and designed faces to almost unrecognizable sculptures swallowed up by the growing reef. In the bottom right picture, the face from Grace Reef has decayed and yet blossomed with color and life only 14 months after placement. 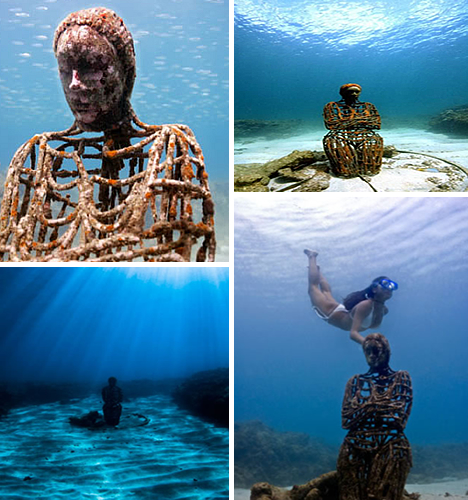 About 12 1/2 feet down, in the crystal blue waters of the West Indies, Sienna waits. She was inspired by a character from Jacob Ross’ short story. Sienna is a young girl with a gift in free diving. The story tells of friendship and betrayal as her talent is manipulated during the search for lost treasure. Sienna’s metal sculpture permits water currents to flow through her body. As marine life and an ecosystem mature, her body will fill in. 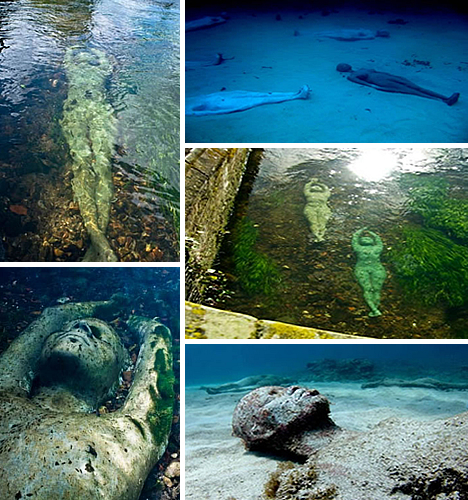 Two female figures, Alluvia can be seen in the clear river from the Westgate Bridge and its adjoining gardens during good weather. At night the sculptures are internally illuminated. Grace Reef, top right and bottom row, is a series of sixteen female figures. They were cast from the bodies of Grenadian women. Grace Reef is visible at times in the clear warm waters. At other times, the sculptures are hidden beneath sand in the the stormy ocean.  A hurricane wreaked destruction upon the sculptures. 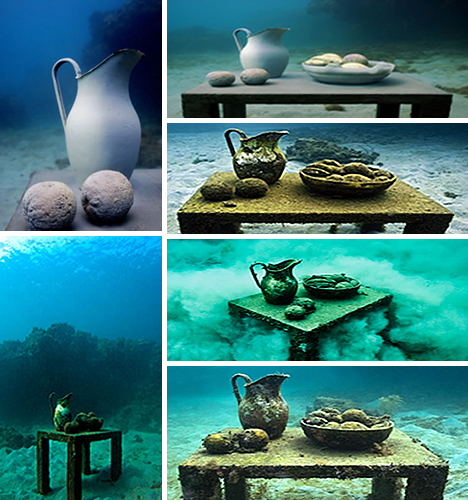 Over 25 feet below the surface, art imitates life. This piece called Un-Still Life is a traditional table setting in Grenada. The concrete table, vase, bowl and fruit show the marking of time as coral colonizes the objects. Un-Still Life is a classical study of life mixing with art, reminding us that change is inevitable and can be for the better. 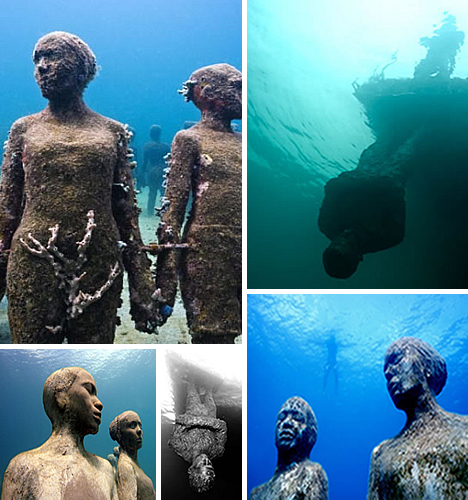 It’s smart art, whether in Grenada or Chepstow, UK. Some of these are more photos of the Vicissitudes growing from artificial reef art to living works of art. The Inverted Solitude, however, is a figure of a man suspended upside down in the UK. The floating platform is at The National Diving and Activities Center in Chepstow. This site was once a stone quarry and is the deepest inland body of water in England, reaching 262 feet deep. The pontoon that holds the Inverted Solitude sculpture is used for national free diving competitions and training.

From La Diablesse to Fish and Chips 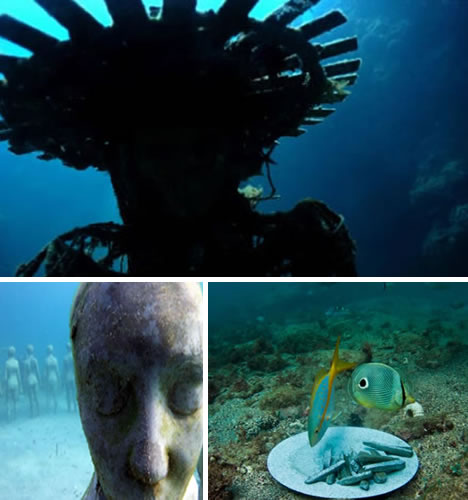 Like a mythical siren of old, one sculpture sits alone in the depths off Grenada. She is La Diablesse, meaning She-Devil. She is a bewitching character from Grenadian literature. Her face is corpse-like and half-hidden under a wide brimmed hat. La Diablesse wears a white blouse and a petticoat down to her feet, but time and underwater environment have stripped them from her body. Her left foot is cloven and is supposed to warn of her approach. Woman hate La Diablesse as the watery witch is known for enchanting men before leading them to a violent death. 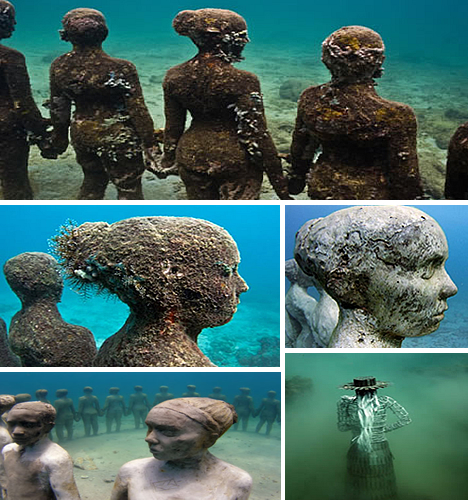 Only about 15% of the seabed is solid enough to permit reefs to form naturally. The artificial reefs are created from environmentally sensitive and secure materials. These reefs have been successful as both works of art and working to attracted coral growth that supports an entire marine ecosystem.