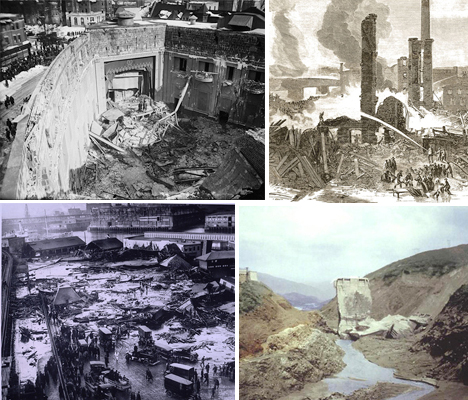 Messing around with money-saving shortcuts or failing to understand basic physics can have deadly consequences when it comes to engineering structures like suspension bridges, dams, towers and even storage tanks. These 7 historic disasters killed over a thousand people between 1845 and 1940 thanks to shoddy craftsmanship or the unanticipated strain of heavy snow, large crowds and strong winds. 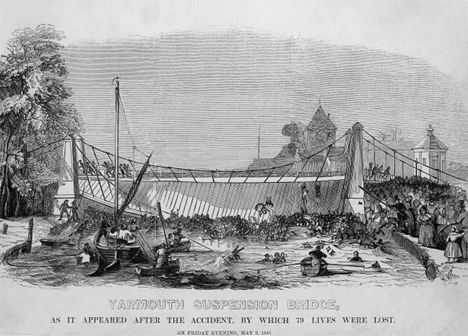 79 people, many of them young children, were killed on May 2nd 1845 when the Great Yarmouth Suspension Bridge collapsed under the weight of the crowd that had gathered to watch the stunts of one Nelson the Clown. The widely-advertised event drew people from all over England to watch the performer swim in a barrel drawn by four geese from Haven Bridge to the Suspension Bridge. Three to four hundred people rushed onto the suspension bridge to get a look at him as he passed underneath, and one of the rods gave way, spilling them all into the water. The youngest victims were just two years old. 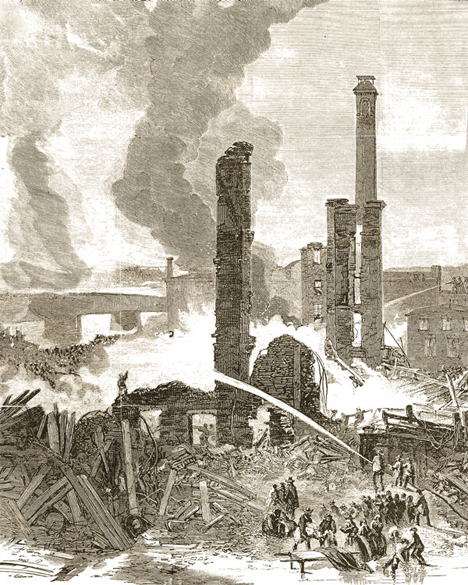 Considered one of the worst industrial accidents in American history, the sudden collapse of the Pemberton Mill in Massachusetts on January 10th, 1860 killed 145 workers and injured another 166. The five-story textile factory buckled and then collapsed at 5pm on a Tuesday, while everyone was still at work. Attempts to illuminate the wreckage with fire in order to rescue the injured added even more chaos to the situation in the form of rapidly spreading fire. An inquiry found that the calamity could have easily been avoided; the owners had loaded far too much heavy machinery on the upper floors of the factory in order to boost production, and the building wasn’t up to standards in the first place, with cheap and brittle iron pillars and improperly mortared bricks. 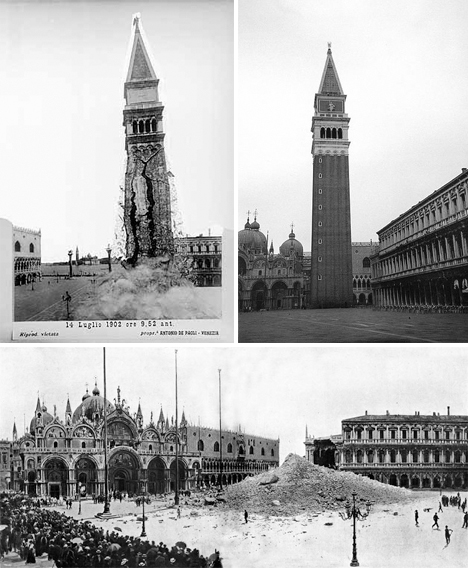 When Venice’s famous St. Mark’s Campanile was struck by lightning, burned and damaged in earthquakes repeatedly over 500 years, it probably would have been best to scrap the whole thing and start over. Instead, they left the base intact and simply rebuilt the damaged parts, occasionally adding more height to the tower that was originally constructed sometime between 1148 and 1157. That wasn’t the greatest idea, given that the tower’s foundation consists of no more than some oak beams on a bed of clay. So it’s no big surprise that the tower finally collapsed on July 14th, 1902. A large crack formed in the morning, rising diagonally across the main corner buttress. Falling stones within the bell chamber prevented any fatalities by warning bystanders that something was amiss. A new tower, with a much sturdier iron foundation, was built in the lost tower’s image. 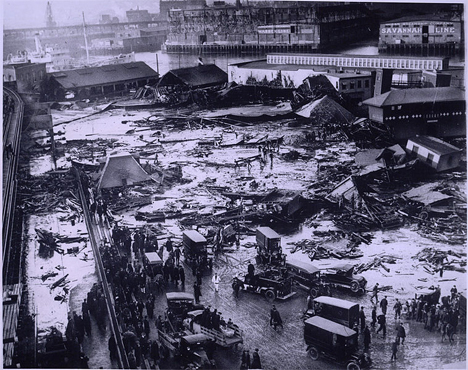 Drowning in molasses isn’t exactly a pleasant way to die. On January 15th, 1919, a large tank of the sticky stuff burst in the North End neighborhood of Boston, sending a wave rushing through the streets at about 35 miles per hour. The Boston Molasses Disaster killed 21 and injured 50 (along with many animals, including horses), and for many decades afterward, residents claimed they could still smell the molasses on hot days. At the time, molasses was the standard sweetener, and was often fermented to produce alcoholic beverages. The tank was said to be poorly constructed, and witnesses claimed that when it burst, rivets shooting out of it produced a sound like a machine gun.