Walter Astrada does not tackle unimportant issues or frivolous acts with his artistic abilities. From one of his fine art photojournalist collections, he offers images daring the world to try and turn their eyes away as if these problem do not exist. The photographs above are from Femicide in Guatemala. Fine art? Indeed it is. His in-depth images and photo documentaries capture basic human rights, injustice, and social issues. 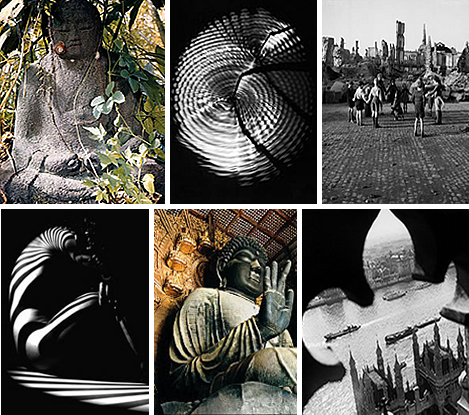 Werner Bischof was originally from Switzerland before he began moving and then traveling as if from a young age he was destined to become a fine art photographer. For a period of his life, he worked for exclusively for a magazine. In fact, he photographed the Olympics, the devastation of the Second World War, and received other international recognition. However he left the ‘superficiality and sensationalism’ of the magazine business behind him and moved forward in search of tranquility in traditional culture. He was a founder of Magnum Photos and died tragically when his car fell off a cliff in the Andes. Above are some of his works, such as Buddha in Japan, children playing ring-around-the-rosie, and a view from Westminster Abbey at The Thames river (bottom right). Bischof is quoted saying,”I felt compelled to venture forth and explore the true face of the world. Leading a satisfying life of plenty had blinded many of us to the immense hardships beyond our borders.” 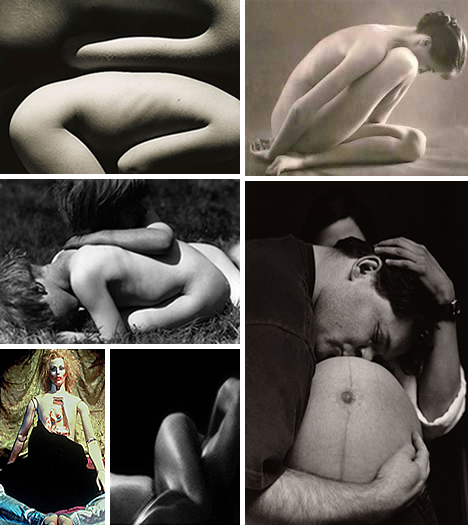 Many and varied photographers devote their entire lives to nude or still life fine art photographs. Walter Chappell presented Mother and Child (upper left) and stated, “Camera vision operates as an intelligent function between the human eyes and the totality of understanding in a moment of active awareness.” Ruth Bernhard studied nudes for 40 years like her image External Body (upper right). She said, “For me, the creation of a photograph is experienced as a heightened emotional response, most akin to poetry and music, each image the culmination of a compelling impulse I cannot deny.” Imogene Cunningham often used her children as her models like Twins on the Grass (middle left). Cindy Sherman captured many images, but her untitled series (bottom left) featuring mannequins in flagrante delicto were in protest against people who protested her friend and fellow nude fine art photographer Robert Mapplethorpe. In the bottom middle photo, Pamela Creevey presented Reclining Nude. Linda Elvira Piedra managed to mix the fine art genres of nudes, figurative and still life like in the bottom right picture. 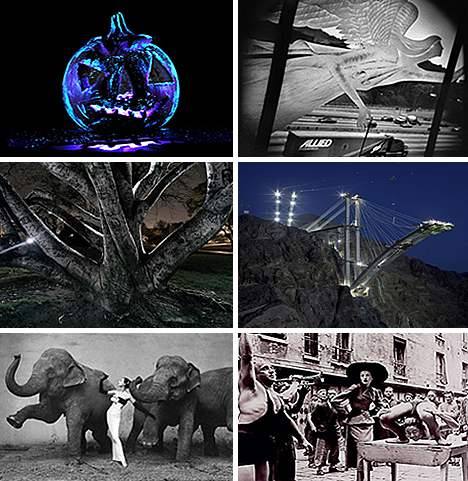 Laurie Tümer takes fine art photographs as a narrative like Glowing Evidence: Jack-o’-Lantern (upper left). Thomas Michael Alleman works with urban landscapes such as the angel in downtown LA (upper right). Jarrett Murphy captured this tree (middle left) in Highland Park, yet his fine art photographs are classified as “other genres.” However, James Stillings is fascinated with the Hoover Dam Bypass Project (middle right) and intends to follow the progress with a photo-documentary. “When completed, the 1900 foot bridge will be the longest concrete arch span in the U.S. and 5th longest in the world. Watching the bridge’s construction at night is both magical and inspiring.” The pictures on bottom were taken by Richard Avedon who started as a fashion photographer and moved into fine arts and images of performers. 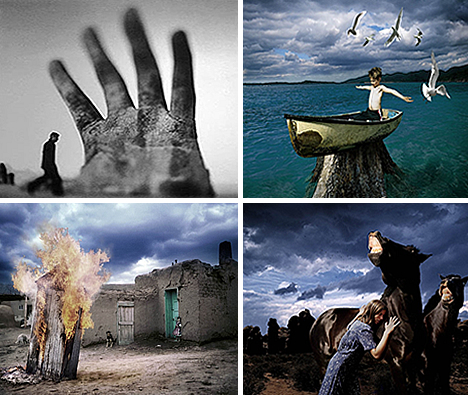 Keith Carter enjoys working with images and his imagination such as with Giant (upper left). He weaves tales of mysterious wonders with photographic narratives. Carter doesn’t seek reality but tries a poetic spin with his pictures. Instead cold hard facts presented through his artistic eye and talent, he hunts “around the edges for those little askew moments – kind of like what makes up our lives – those slightly awkward, lovely moments.” Tom Chambers brings the world photomontages. Chamber said, “I build my images, starting with an idea and converting it to a sketch that I follow to create the final image.” Pictured in the upper right is Aground. On the bottom left is Pueblo Fire and on the bottom right is Horse Talk.