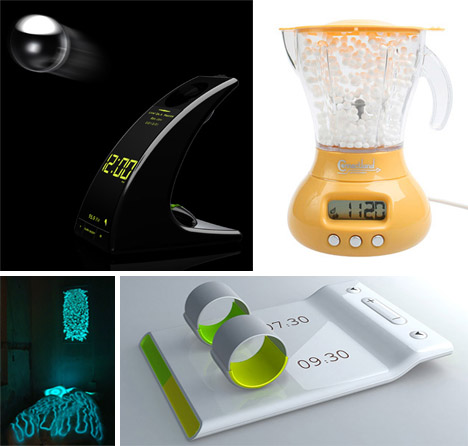 The best morning alarm in the world is a sneaky elbow in the ribs – but if you are a singleton or have a partner even more sleepy-headed than yourself, you will be the owner of a digital waking assistant, better known as an alarm clock. If you are naturally a late riser this will be an indispensable part of your cultural toolkit…and it had better work. Problem: we all react to them differently. Thankfully modern designers are working hard to make alarms that suit all tastes, as these 19 examples demonstrate. Would you want to be woken up by any of these? 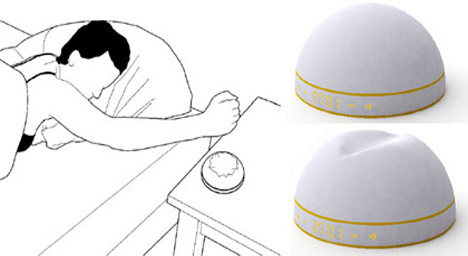 The first thing you want to do with your alarm clock when it starts warbling is, of course, batter it to a pulp. (You’re only human). This alarm – called Smash – encourages such “percussive maintenance” by having the switch buried underneath a deformable top. Hammer it with your fist and blessed tranquility will return. 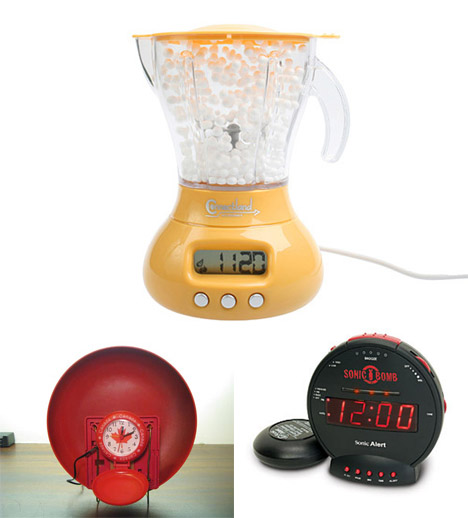 (Images via: gadgettastic and Geekologie / Geekologie

Perhaps the biggest problem with alarms is when your brain gets used to the noise and tunes it out. There are people who change their alarms as often as their toothbrushes and aim for the most wretched-sounding digital samples (“SAY KIDS, WHAT TIME IS IT?”, etc.) but if sonic flagellation isn’t your thing and you want a noise that will instantly and unfailingly shift your butt, you could try any of these options. The USB Blender (not a real blender – although there’s an idea) will roar to life at the appointed hour, making a catastrophic noise that also reminds you of breakfast. The Fire Bell Alarm is a hack and therefore not available in the shops – and you can imagine the effect it has on you when it rings. But for sheer volume, the Sonic Bomb claims to drown all other contenders out with a sleep-destroying 113dB alarm tone (louder than a jackhammer). Does anyone sleep that soundly? 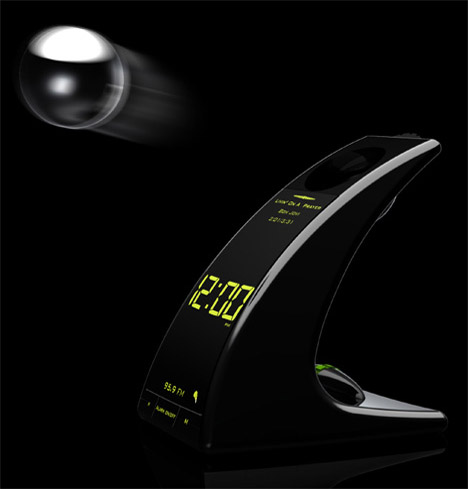 There is an old trick for staying awake that goes thus: place a metal tray on the ground, and hold ball bearings in one hand – when you get sleepy your grip slackens and the balls clatter onto the tray, waking you up. Perhaps the inventor of Aphelion has heard this story, as this alarm wakes you by catapulting a ball from its cradle directly at you. Worryingly, the ball looks like it’s made of metal (let’s hope not). 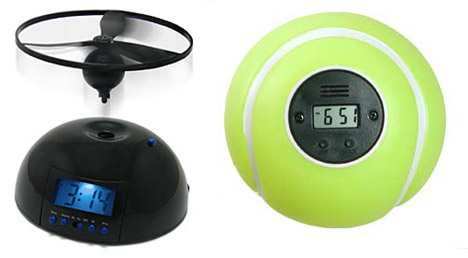 (Images via: ThinkGeek and TennisGifts)

For a less potentially injurous projectile, try helicopter blades. (Er, or perhaps more injurous. Only one way to find out).  When your sleeping time is up, the Flying Alarm lets loose with the kind of siren that would have Captain Kirk sprinting towards the bridge, and in a few seconds the top’s fan blades are rotating enough to detatch the key from its housing, sending it hurtling into a corner of the room. If you’re lucky. If you prefer to get your own back on all clocks everywhere, try battering the Tennis Ball Throw Alarm against one wall to shut it up – just don’t leave any windows open. 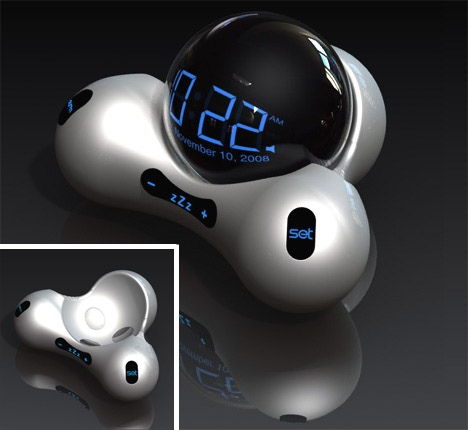 Now, whatever you do, remember which alarm you have. This is the DiGi Alarm Clock, and you switch it off by gently lifting the inset globe from the base and replacing it. Not to be confused with the tennis ball alarm clock, ‘kay? 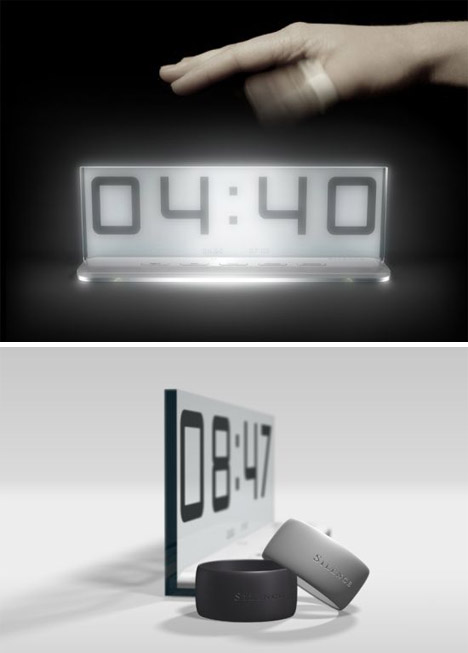 Throw something? Pick something up? Do these designers realize how blearily uncoordinated we are when we wake? For those of us who really struggle with our mornings, the Silence Wireless Alarm is turned off with nothing but a vague wave of the hand in the broad vicinity – and as the name suggests, it wakes you without a peep of noise, all done with the aid of a vibrating ring that is worn as you sleep. 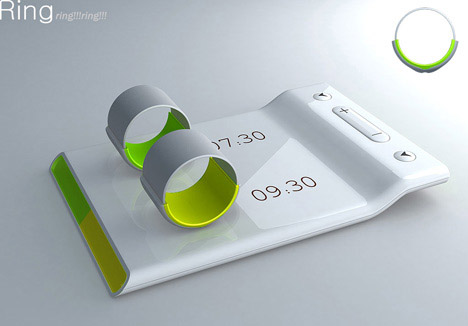 Very much of the same ilk is the Alarming Ring by designer Meng Fandi – except in this case you have to place the ring back in its housing to stop it humming. Do you fumble and knock things over when your alarm goes off? This will either be good practice…or an exercise in frustration.

(Images via: boingboing and Amazon)

And on the subject of frustration, being made grumpy is certainly a good way to wake up. The Tantrum-Throwing Alarm Clock aims to irritate you out of bed by creating a commotion in escalating increments. Read BoingBoing’s infuriated review for more details. Alternately, how about an alarm that plays hard-to-get? The Clocky wheels itself out of grasp when you reach for it, thumping onto the floor and diving into the nearest hideyhole, all while emitting a shrill noise that sets your teeth on edge. Lovely. You might want to get your blood pressure checked out before buying this sucker.

(Images via: Paul Tobin and ThinkGeek)

Now this is more like it. Indulge your Woosterian fantasies by having Jeeves, aka. actor, comedian and Twitter luminary Stephen Fry, smoothly divesting you of your slumbers with lines such as “It appears to be morning. Very inconvenient, I agree. I believe it is the rotation of the Earth that is to blame, Sir.” 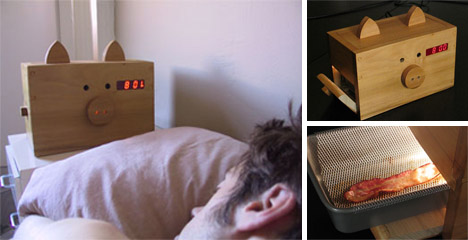 If your entire nervous system is governed by your awareness of cooking food, or put another way, if you are male, you will love this clock perhaps even more than life itself. The Wake’n’Bacon is fitted with two halogen lamps that turn on ten minutes before it’s time to wake – cooking a slice of bacon you have put on the recessed grill-tray. Who could sleep through the smell of cooking bacon? Who would want to? 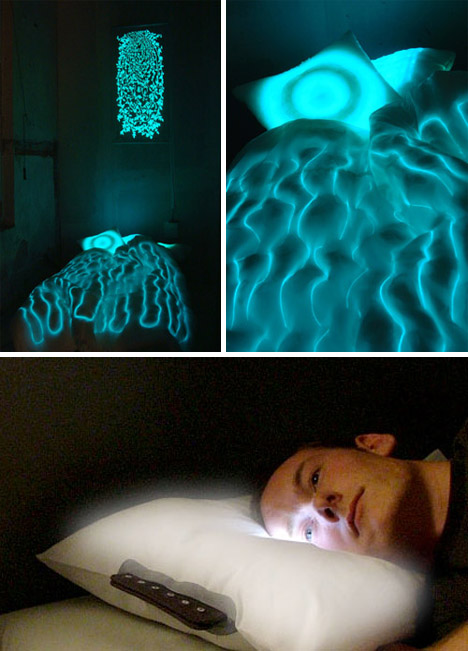 (Images via: loop.ph and walyou)

Utilizing another of the five senses, the LightSleeper is about as high-concept as modern alarms get. The electroluminescent bedding and wall hanging fill the room with soft light, imitating the glow of dawn (or the world of TRON, depending on your perspective). For a more in-your-face approach, the Glowing Pillow is filled with LEDs that shine a light in your eyes until you wake, possibly after dreaming you’re being interrogated. 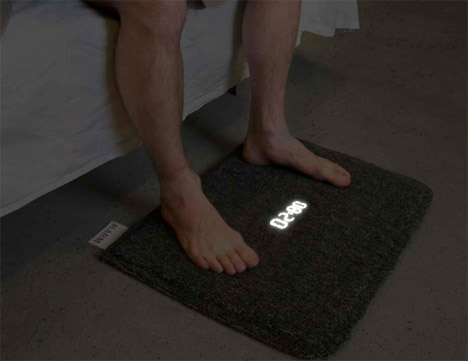 Turning to a more tactile approach, the Carpet Alarm Clock doesn’t encourage you to get out of bed – it requires it. It will only stop shrieking when you stand on it. For added effect you could put it at the other side of the room. Or just outside your window. 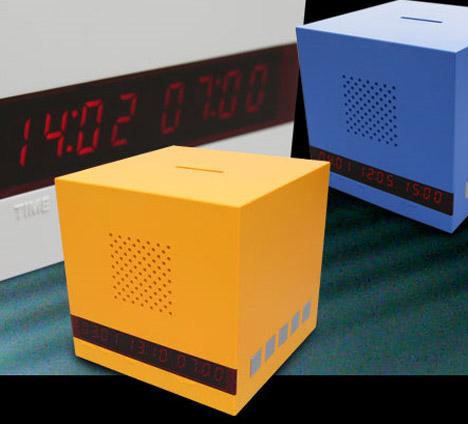 Lastly – ever muttered “I’d pay good money if that [email protected]&*alarm would turn off!” Well, stump up your loose change, because this clock will only stop its noise when you feed coins into it. If you want to get into the habit of putting a little money aside for a rainy day or a worthy cause – or want to extort a little beer-money from your loved one – this will work beautifully. Now all we need is for someone to design one that pays out money: surely the perfect incentive to greet the day?