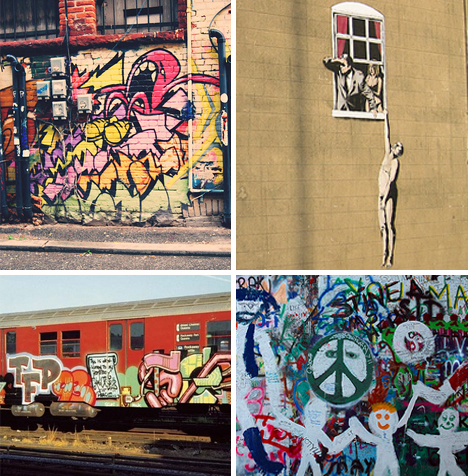 Since the first spray paint tags appeared in Philadelphia and NYC in the 1970s, graffiti has spread all around the world. From simple tags to complex pieces, some form of graffiti is present in just about every city on the planet. No matter where you are, you’ll notice that graffiti happens to show up largely in the same places: on trains, in subways, and on walls lining urban streets. 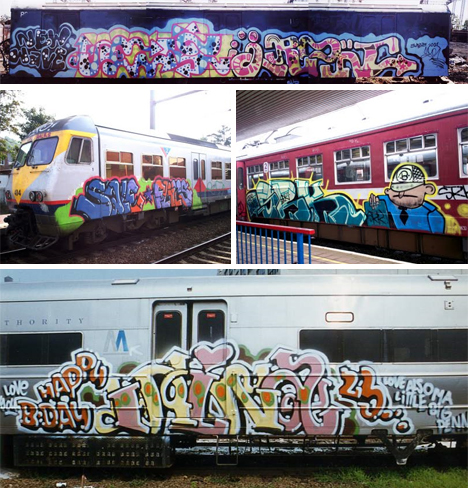 (images via: Art Crimes and Graffiti Art on Trains)

Trains are, of course, where modern graffiti got its start. Why trains? They made their way all over the city, providing maximum exposure and a kind of communication channel. Graffiti writers got to see the work of writers in other boroughs and keep up on what they were doing. At the same time, trains collected tags wherever they went, creating a unique kind of mobile yearbook.. 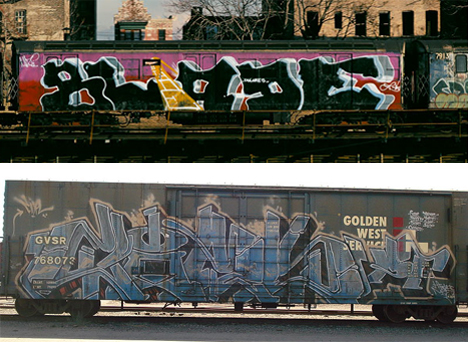 (images via: Wikimedia and Jon Jost)

Eventually, writers weren’t satisfied with just writing their names and moved on to creating entire pieces on the cars. End-to-ends (pieces covering the train car from one end to the other) flourished, and the graffiti became more complex and stylized. Train yards were (and are) dangerous places for people who aren’t supposed to be there, so the bigger and more elaborate the piece, the more cred a writer earned. 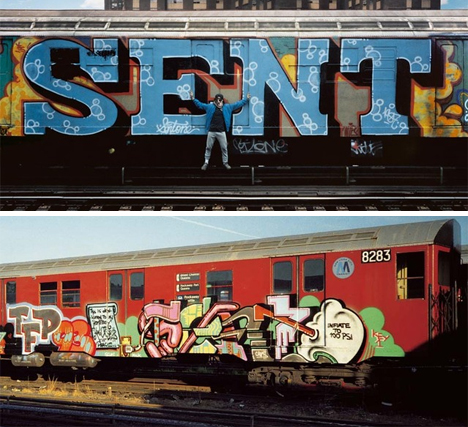 At the height of train graffiti, whole cars were sometimes painted – end-to-end and top-to-bottom, including windows. These were incredibly difficult to do and required a significant amount of preparation. Only a few times have whole-train pieces been carried off; most notably, the “Christmas Train” project which happened on December 2, 1977 in the Coney Island yard. Ten train cars were involved. 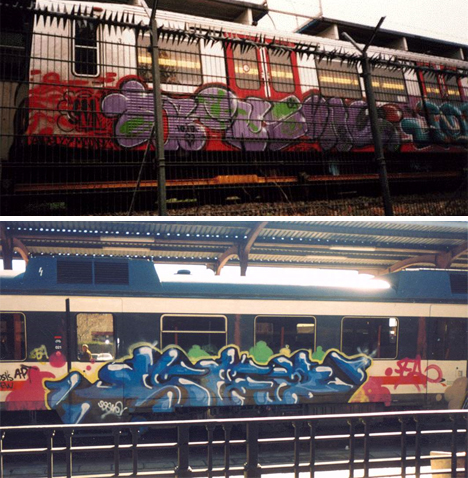 Tagging trains in NYC decreased dramatically in the early to mid-1980s. The Metropolitan Transit Authority’s anti-graffiti budget increased greatly, and trains became much more heavily guarded. Favorite spots were hard to get to, and penalties for graffiti writing went up. 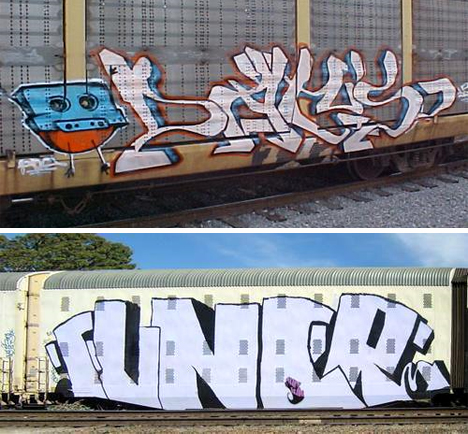 Today, trains are still painted all over the globe. Freight trains can often be spied rolling through towns with tags by writers from far away. In many cities, passenger trains aren’t allowed to roll out of the station with graffiti on them, but freight trains are another story. Occasionally, graffiti writers are even invited to decorate trains, legally, presumably because the image of graffiti on trains has become so iconic. 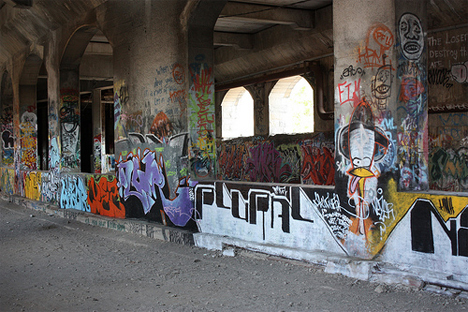 Subway tunnels and continue to be ripe environments for graffiti to take place. Painting on subway cars is highly dangerous and has resulted in many deaths, yet many writers continue to risk their lives to score sweet spots on the cars. In New York, as in some other cities, tagging subway trains is all but extinct thanks to better enforcement and sharp enforcement. Tagging tunnels is a little safer, but will still result in arrest on sight in many places. 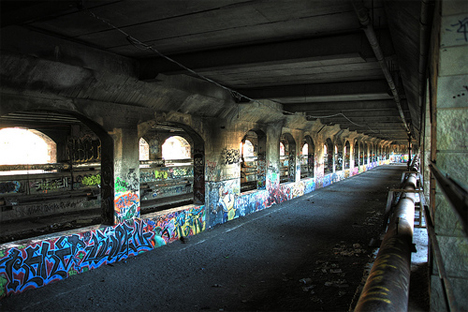 Still, there’s something otherworldly about underground graffiti. Just seeing it leaves you feeling like part of the subculture. Unfortunately, most tags and illegal graffiti don’t do a lot to beautify the dim underground tunnels. 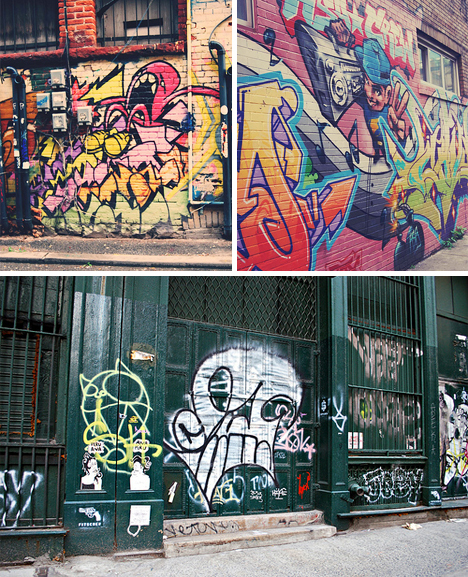 (images via: fly as hale and Karen Marlene Larsen)

Walk along the streets of any major city, and many small towns, and you’ll see no shortage of graff. It’s an almost primal expression, being at once immediate, subversive and long-lasting. It would be hard to find someone who didn’t see simple tags as mere vandalism, but the more complicated pieces walk a fine line. 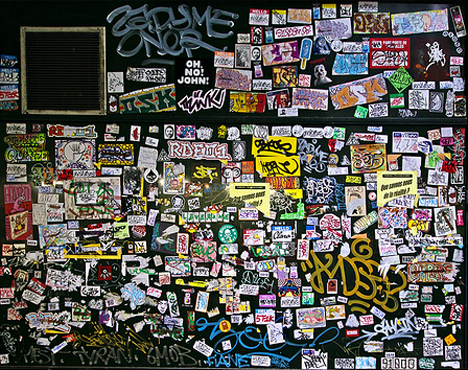 The roots of graffiti – way back before it took hold in Philly and NYC streets – were in political messages. People who had something to say scrawled it on a wall, and everyone who passed by that particular spot would see it. For a while, graffiti moved away from the political side and centered mainly on marking territory or getting a name up as much as possible. Then, of course, there were those writers who wanted to accomplish something beautiful and memorable. It’s that group that’s bringing the political graffiti back. 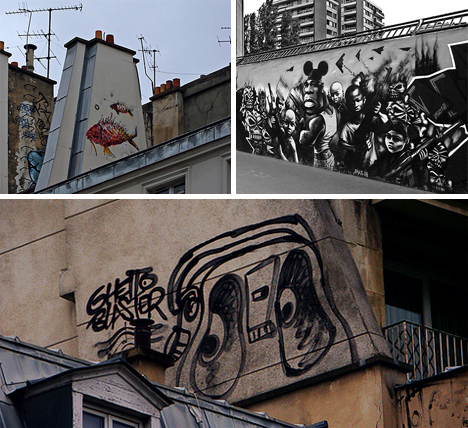 Along with the politically-inclined graffiti, purely artistic graffiti seems to be growing. Part of the reason for this is the public’s embracing of public art murals and “legal” graffiti. It’s amazing to see how a colorful piece can brighten up a dingy street. If well-placed and well-publicized, a piece by a well-known graffiti artist can actually bring tourists to the area. Banksy is the perfect example; there are books and even tours that examine his most famous works. People travel to see a Banksy piece in person and pump their tourism money into that location. 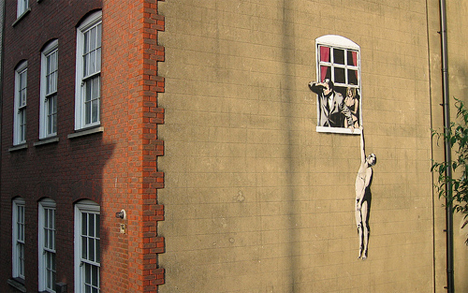 Seeing this, many business owners and even communities have invited graffiti artists and muralists to have their way with public spaces. On some occasions, even if a piece isn’t commissioned or sanctioned, the community it’s in may decide to leave it there rather than destroy it because of its artistic or touristic value. Such was the case with the above Banksy piece in Bristol; the town was asked whether the piece should be destroyed, and the majority voted to keep it where it was. 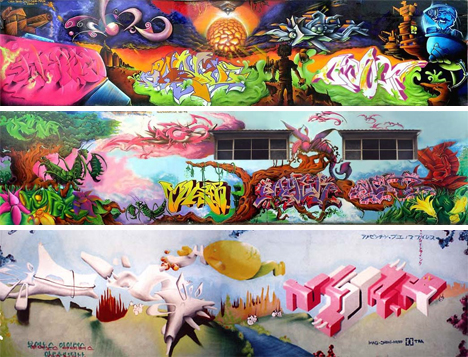 Walls are arguably the most common place to find graffiti today. Walls of buildings in urban settings are often plagued by taggers, whether those walls contain a business or a home. Freeway noise barrier walls are also hit very often. Since it was made difficult in many cities to tag trains, walls have become the primary targets. But since many walls are exposed and well-lit, they often pose more of a risk for the graffiti artist. 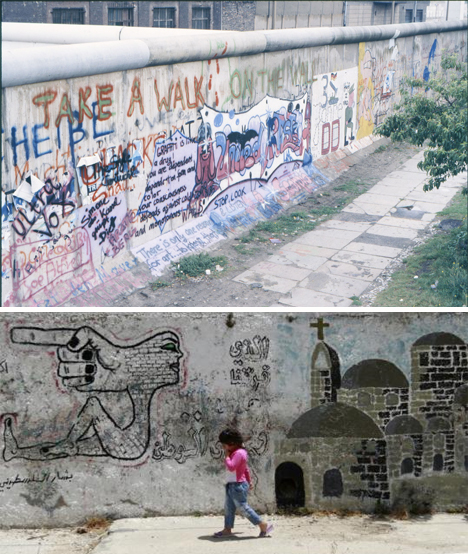 (images via: thachabre and Boston.com)

Two of the most famous graffiti-covered walls are the former Berlin Wall and the Israeli West Bank barrier wall. Though the Berlin wall fell 20 years ago, it remains one of the most memorable graffiti sites in the world. The Israeli West Bank barrier, like the Berlin Wall, is extremely controversial, and like the Berlin wall it’s being covered in graffiti – mostly from people who disagree with its existence. 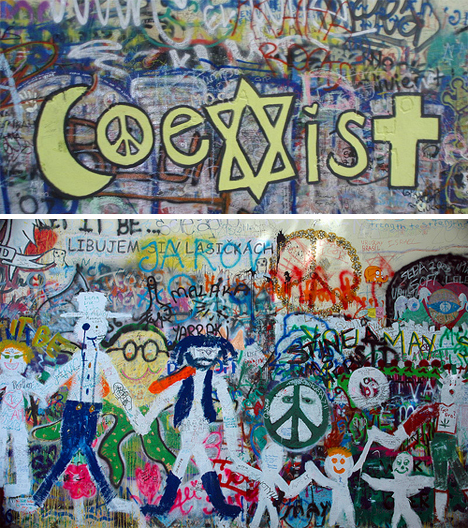 Another well-known but slightly less controversial graffiti wall is the John Lennon wall in Prague. It sits near the west end of the Charles Bridge and has been there for nearly 30 years, since shortly after Lennon’s death. It is covered in Beatles lyrics, messages to the fallen musician, and various other scrawlings and pictures. The controversy surrounding this wall came from the fact that Lennon’s music (and all western pop and rock music) was banned in Communist Czechoslovakia. When Communism collapsed non-violently in Czechoslovakia, the wall remained as a testament to free speech. 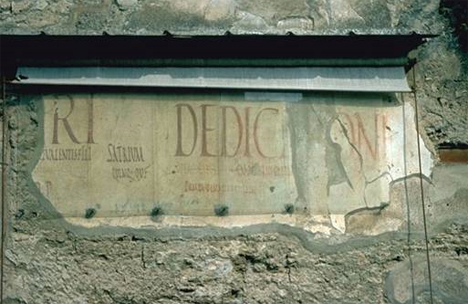 (image via: Pompeii In Pictures)

Even the ancient walls of Pompeii, preserved in volcanic ash for over 2000 years, were covered in graffiti. Much of it was very sexual in nature, and some of it was just plain crude, but it’s interesting to note that even 2000 years ago people felt compelled to leave a little something of themselves behind to tell others that they’d been there.