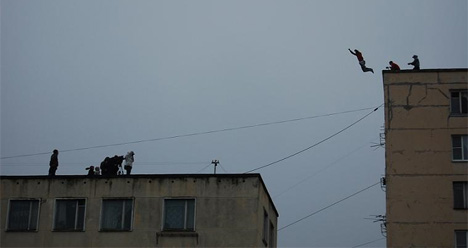 A new video and set of photographs is circulating from St. Petersburg, Russia, where the Parkour movement is gaining a strong foothold among the city’s youth. The video shows a young man jumping from one rooftop to another, with 35 feet of height difference and about 20 feet of space between the buildings.

It’s inspiring mixed feelings from the public and from Parkour enthusiasts. While the stunt was impressive and the stuntman seemed to know what  he was doing, it was incredibly dangerous. But the group featured in the video say that they were trying to raise awareness of the sport and point out the problem of a lack of safe, sanctioned places to practice it.

This Russian news story shows another side of the stunt. The man doing the first jump pulled it off perfectly without any problems, but when a friend tried the same jump he injured his leg. We don’t speak Russian so we’re not sure what the newscaster is saying, but judging from his tone it’s not entirely positive.

Parkour is generally seen as a physically challenging sport that’s somewhat dangerous, but not overly so. This video of Austrian traceur Sacha Hauser shows that Parkour isn’t just about taking the biggest risks and evoking the biggest reactions – it’s also a beautiful, artistic use of the human body’s strength.