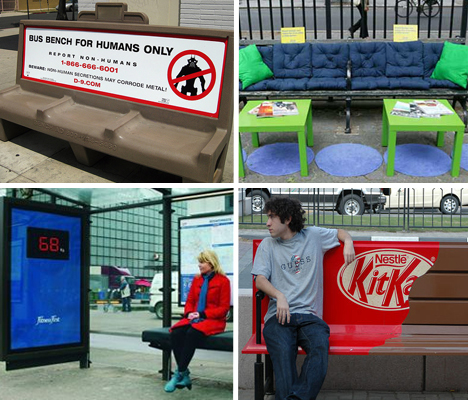 A bench is a bench – except when it’s also a platform for a surprising, thought-provoking, memorable advertisement that sometimes even functions as urban art. The best bench ads turn ubiquitous public furniture into interactive displays that entreat the public to get fit, go on vacation, try a new product and even conserve resources.

District 9 Bench: For Humans Only 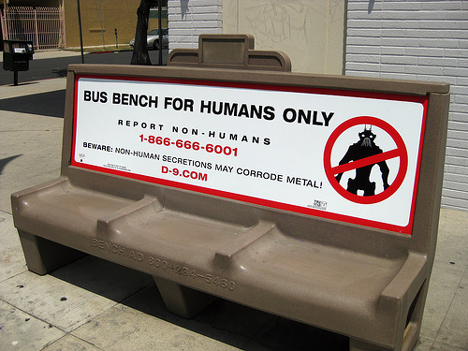 Before anyone heard of a little film called District 9, signs barring non-humans from using benches and restrooms could be seen in major cities such as Los Angeles. With a phone number and a warning that “non-human secretions may corrode metal”, these advertisements blurred the line between reality and the fictional world created by the filmmakers in typical guerilla fashion.

Fed-Ex can ship practically anything – including benches, as ‘demonstrated’ by this bubble-wrapped bench. The ad series, conceived by BBDO New York, was created to announce the opening of FedEx Kinko’s locations in fairly remote locations. 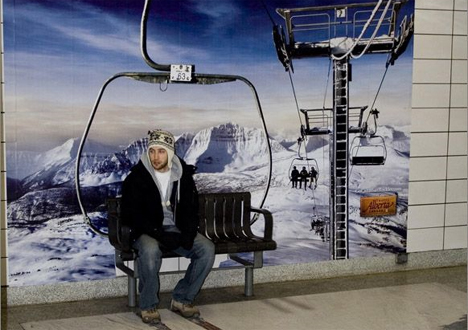 Can you picture yourself on an adventurous ski trip, heading up the slope on a lift that provides stunning views of the surrounding landscape? If not, Alberta Travel is happy to help with this creative bench ad that even emulates skis on your feet and snow down below.

Use Only What You Need 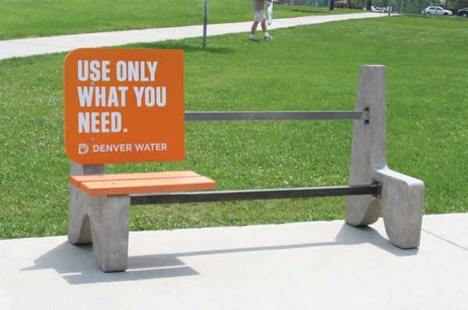 Ads promoting water conservation might be easily overlooked by a public that has begun to tune out conventional modes of promotion. But, it’s hard to pass by this bench, created by Sukle Advertising & Design advertising agency for Denver Water, without taking a second look and absorbing the message: use only what you need. 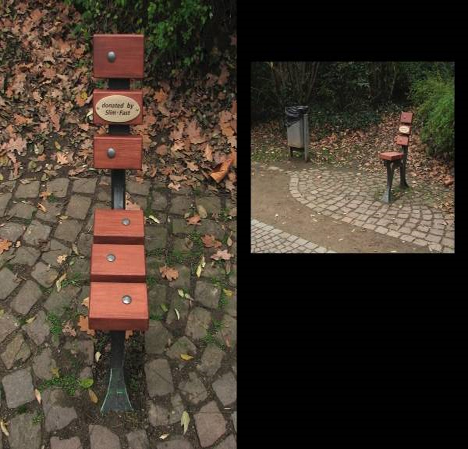 A similarly skinny bench communicates something different altogether: if you can’t sit here, perhaps you need to lose some weight. Slim Fast helpfully points people in the right direction with a plaque that reads “Donated by Slim Fast”. 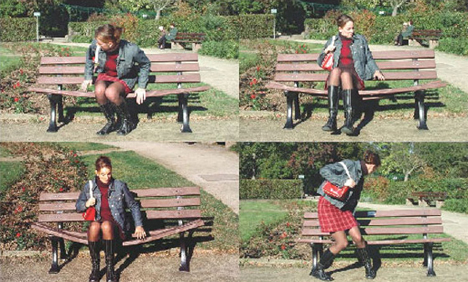 Similarly, one cereal brand hopes that consumers will be enticed to try their product after finding that a public bench caves in beneath their weight. This bench in Germany was made with a flexible material to shock people into thinking about how heavy they are, and convince them that 99.9% fat-free Special K was the way to fix the problem. 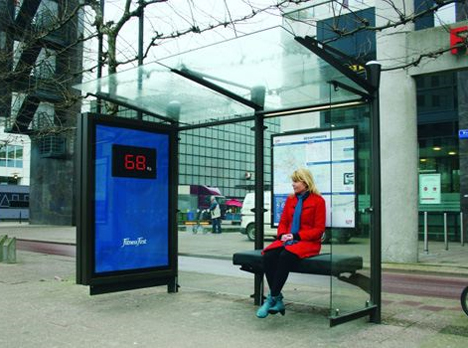 Of course, if undersized or collapsing seating areas don’t work, there’s always a more potent way to shame the overweight public: a bus shelter bench with a built-in scale that broadcasts their weight to the world at large. This one in Amsterdam was created by the world’s third-largest gym chain, Fitness First.

No Choice But to Get Closer 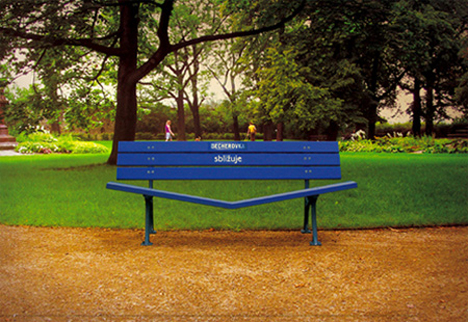 Just try sitting on this slanted bench with somebody else without sliding right into each other. It literally forces people to “Get Closer”, which happens to be the ad slogan for a Czech liquor called Becherovka.

A Stroller Fit for a Baby Giraffe 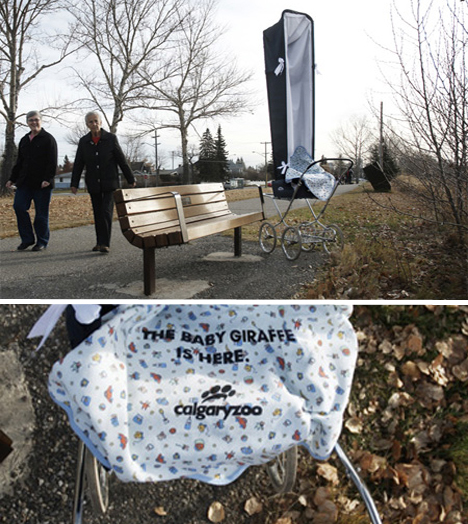 This extra-tall stroller – or pram, if you’re not American – certainly catches the attention of anyone who happens to sit on the bench beside it. The unusual ad by Calgary Zoo uses an embroidered blanket to tell the public that “the baby giraffe is here”. 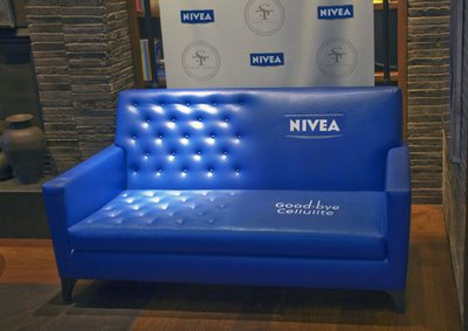 Sitting on cellulite isn’t pretty – unless it’s in the form of a dimpled blue bench. This ad by Nivea promoting its Goodbye-Cellulite lotion manages to convey the message that smooth skin is superior to cellulite without anything too disturbingly skin-like. 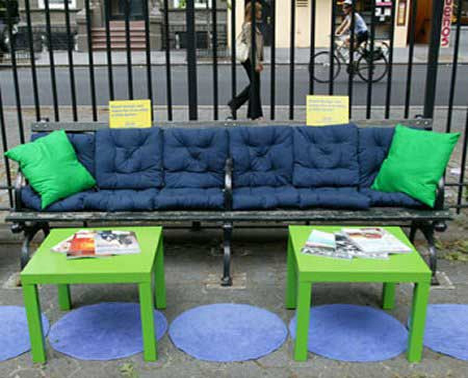 IKEA proves that even the ugliest, most worn-out bench you can find in an urban environment can be instantly transformed into a homey, welcoming space to relax with some inexpensive Swedish fabric and accessories. 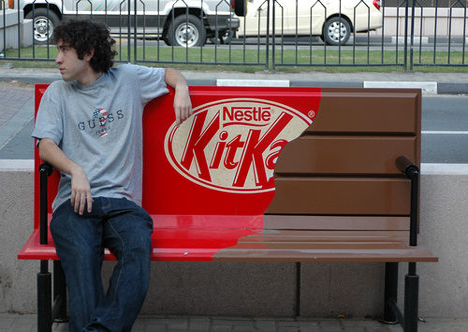 Seeing the brown slats of a bench partially enveloped in a Kit-Kat wrapper begs the question: why didn’t they think of this earlier? It’s a perfect fit that undoubtedly had many an onlooker suddenly craving chocolate-covered wafers. 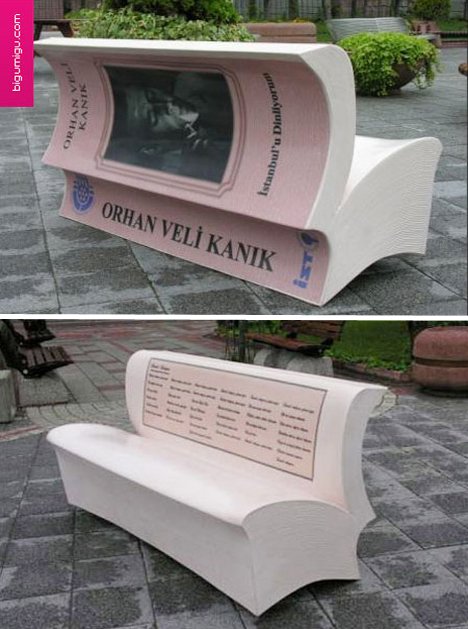 Istanbul is an open book – 18 of them, in fact, all written by Turkish poets. This ad campaign not only promotes reading and publicizes the work of native writers, but turns boring public furniture into functional works of art. 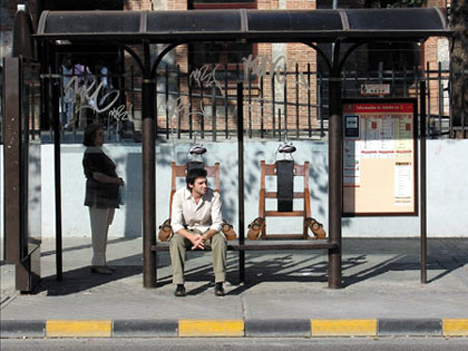 We might let important social issues slip our minds while going about our daily lives, but Amnesty International is here to remind us that “More than 4000 condemned until death are waiting for their execution. No to Capital punishment”. Accompanying these words at a Barcelona bus shelter was a bench designed to look like a pair of electric chairs. 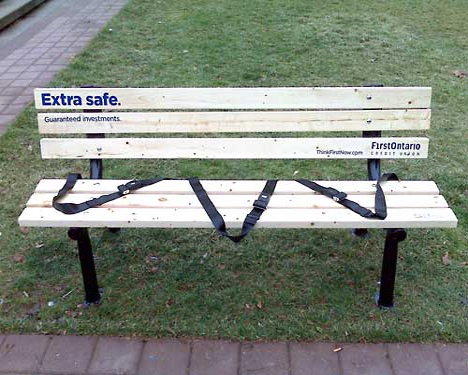 If this ad and others in the same series were put out by an insurance agency, one would have to wonder whether the “extra safe” message really implies that consumers are buying way more coverage than they need. But the ads were actually created by FirstOntario Credit Union to assure the public that their short-term investments are secure as can be, even in this shaky economic climate – so it works.