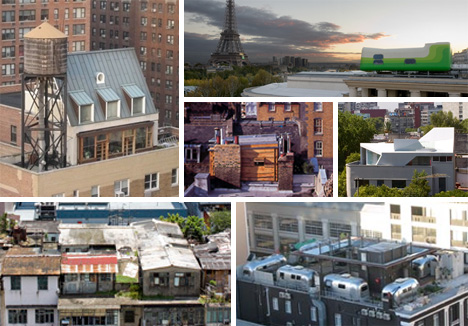 Rooftops have long been popular urban substitutions for yards; city dwellers use their rooftops for sunbathing, grilling a few hamburgers, hanging clothes out to dry, or even a bit of rooftop gardening. But these clever dwellings use sky-high rooftop space as a prime location for living quarters. Rooftop dwellings run the range from shanties to luxury penthouses, but they all bear the benefit of offering the residents a bird’s eye view of their surroundings 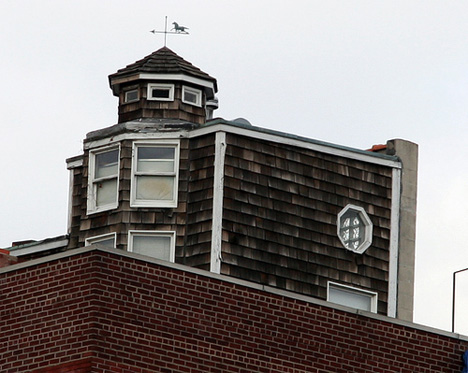 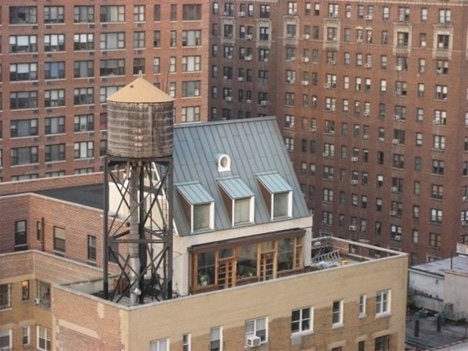 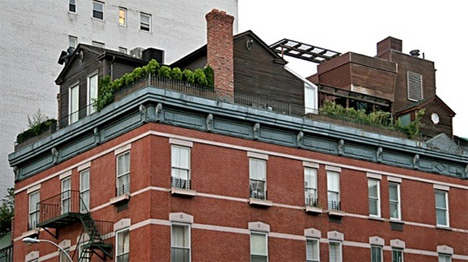 In a city where real estate is precious and scarce, it makes sense to build up. These structures were built on top of existing buildings, and they’re not an entirely unusual sight in New York and other densely populated cities. They are usually built to give the existing owners/occupants more room, or to provide a warm-weather retreat. However, smart building owners could easily rent them out as luxury penthouses, given their unparalleled views of the city. 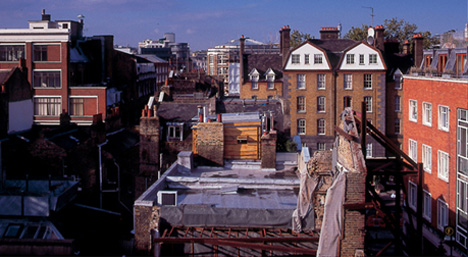 When graphic designer Morag Myerscough decided to add on to her Clerkenwell home, she called Hut Architecture to design her very own rooftop retreat. The tiny hut atop her roof looks like it was simply plopped there by a crane, but in fact it was built on site. A stairwell inside the main home leads up to the hut on the roof, emerging inside the tiny addition. The project was featured on BBC3’s Guerrilla Homes, possibly providing inspiration for other city dwellers who don’t feel they have room to expand their homes. 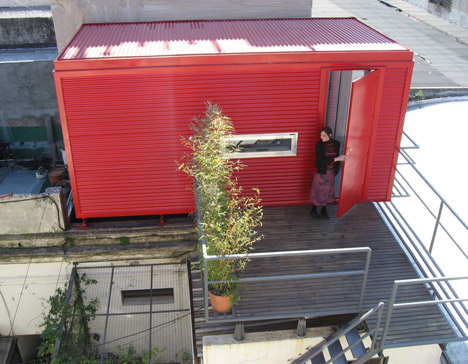 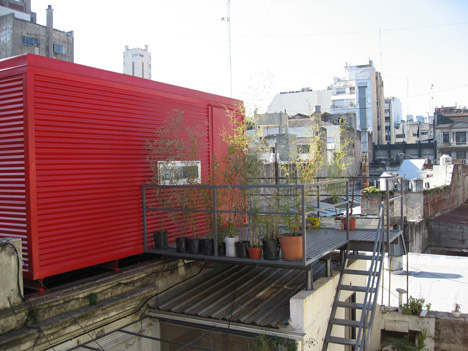 Textile designer Rosa Skific needed to add a workshop on to her small Buenos Aires home, but there were some rather constricting stipulations: it had to be low-budget, of low environmental impact, and take up virtually no space. FPS Architecture stepped in with a solution: perch a prefab metal container on the roof and connect it to the main house via a set of stairs. The resulting workshop adds the needed space without taking up any additional real estate, and the cheery red color adds a bit of life to the otherwise grey and chaotic Buenos Aires rooftop landscape. 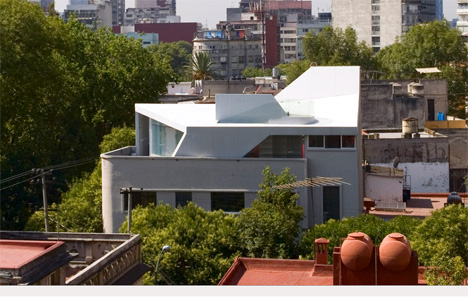 (image via: The Architectural Review)

This home, in an architecturally fascinating part of Mexico City, once featured a tiny artist’s shack on its rooftop. The owners decided to keep the rooftop living, but to actually extend the formal living space up into a brand new penthouse. The Austrian group Architects Collective worked with Mexico City architects at.103 to create this fluid, modern addition to the existing three-story building. 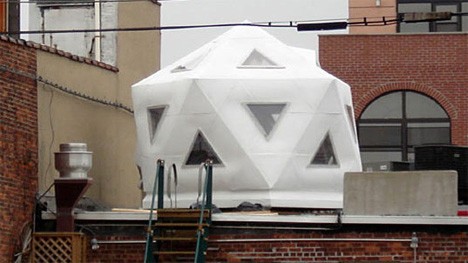 (images via: Dornob and Apartment Therapy)

Building a permanent addition to an existing home isn’t the only way to add rooftop living space. These prefab additions could easily function as temporary additions, then later be moved to a different location. The top image is a LoftCube: an all-in-one dwelling designed to be easily dropped into place on a rooftop via a crane. This modern design lets in plenty of natural light and would look perfect atop a tall building. For those who prefer the DIY life, the bottom image is an Icosa Village Pod. These sustainable, low-cost pods actually snap together in place, making them ideal for on-site building. This one lives in New York, no doubt giving its occupants stunning high-rise views of the city. 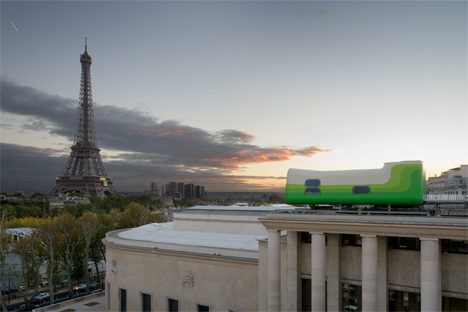 These rooftop hotel rooms represent a surprisingly luxurious side to both “mobile” homes and rooftop living. The above image is Hotel Everland, which is as much art project as it is hotel room. Designed by art duo Sabina Lang and Daniel Baumann, it’s a one-room hotel that travels to different locations, landing atop each roof for a limited time. The room can be rented for one night only, and comes with a stocked minibar (included in the price), towels which the artists encourage guests to steal, and unforgettable, ever-changing views.

These pictures are from the Grand Daddy Hotel in South Africa, the owners of which decided to add a distinctive penthouse level made of old Airstream mobile homes on the building’s roof. The rooms are all uniquely decorated and share a central open-air courtyard, much like an urban rooftop campground. 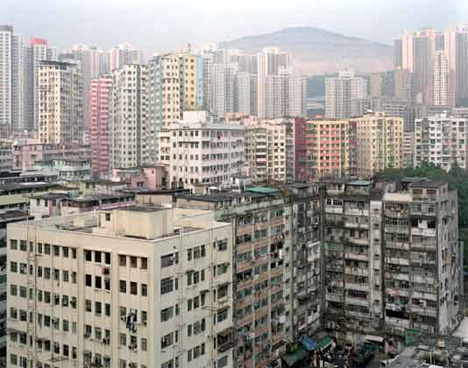 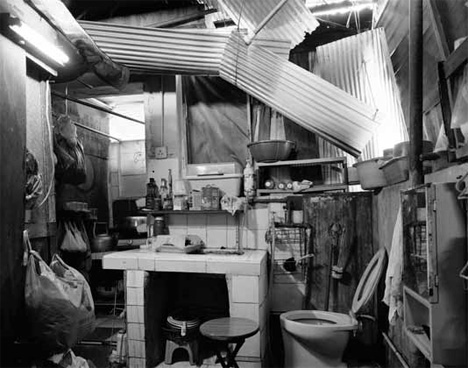 Rooftop living isn’t all about luxury. In many parts of the world, the poor and the homeless have taken to the rooftops as a last refuge. Illegal rooftop homes in Hong Kong, such as those above, have been considered by officials to be a public safety hazard for quite some time. They are systematically removing the homes, which are often little more than shanties built of sheet metal. The fascinating rooftop communities of Hong Kong were documented – with pictures, explanations and even architectural drawings – in the book Portraits From Above: Hong Kong’s Informal Rooftop Communities by Stefan Canham and Rufina Wu. 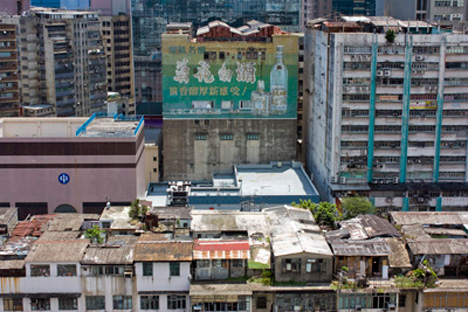 Lined up on the tops of apartment buildings, at first glance they almost appear to belong there. Indeed, they are often bought and rented just like regular real estate. But most of these rooftop dwellings are occupied by immigrants, asylum seekers and indigent people who simply cannot afford conventional housing.