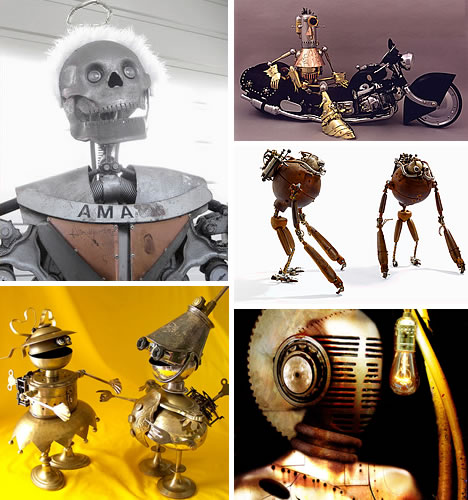 These creative technological inventions have a streak of steampunk, robots built into a pseudo-Victorian mechanical fantasy. Retro art, these modded vintage gadgets merge the modern day world with that of Jules Verne. Here is a sci-fi retro-vision with as many steampunk-kissed elements as we could find over a wide arrange of robot sculptures, somewhere between domo arigato Mr. Roboto and Kilroy. This was junk repurposed to a more grand design, constructed into steampunkesque robot art. 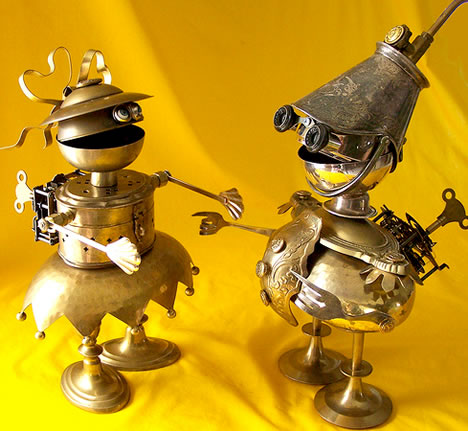 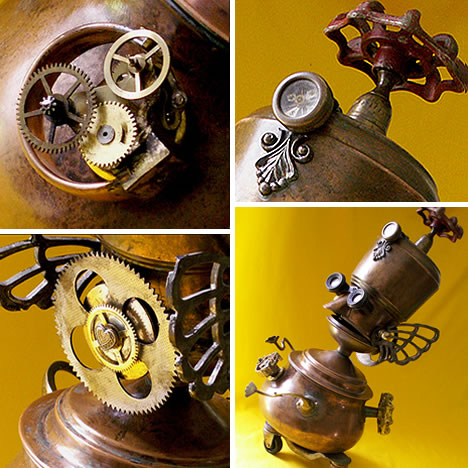 Awww, robot love. If you love robots, here is a mishmash of robots and robot-like sculptures with a steampunkesque flavor. Brenda and Commander Cupcake look cute together, but their creator says, “she will make his life a living hell. Brenda was born to be bad.” On the bottom is “Professor Portly, The Endlessly Curious Seeker Of Wisdom And Truth.” What is the truth about these robots? Tinkerers repurposed old parts, sometimes mixing technology, brass, clockwork, chrome and many other things into a Victorian mod theme of robot sculptures. 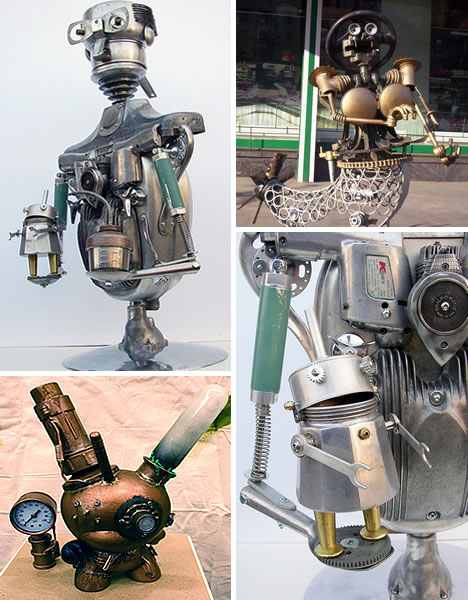 What do you get when you have a guy robot and introduce him to a gal robot? Toss in a steampunked bong and tada, baby robot. All are handcrafted, from using paper to using bits and pieces of metal rescued from a trash heap. There are times when something that has been destroyed and discarded comes back in a stronger form and better than ever. 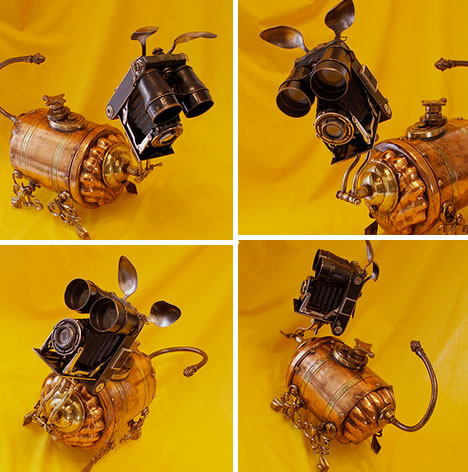 This little dog is downright cute and requires no walking and no buying dog food. These robot-like sculptures take hours, weeks and sometimes even months to complete. Yet the end design can sometimes be playful like “Woof.” 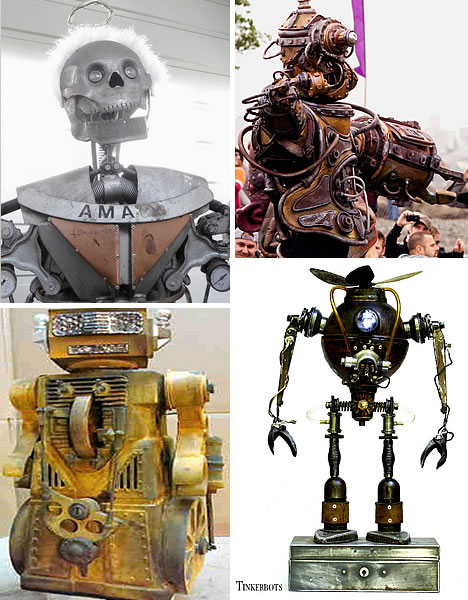 Steampunky-inspired artists can put their incredible imaginations to work and produce science fiction magic. The robot angel comes complete with a halo, a bizarre combo. The apocalyptic robot on the upper right has leather, bronze and copper tubing with a straight-up steampunk style. Rust and gears are another popular steampunk style for robots. The robot sculpture “Vesuvius” on the bottom right is an assemblage robot. 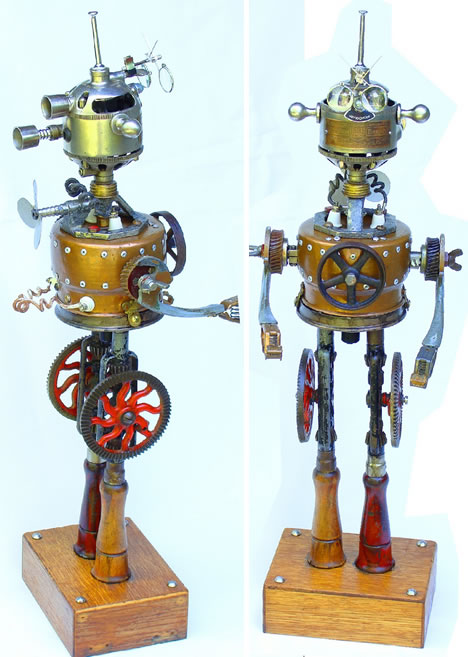 This little steampunk guy is “Dr. Hamilton Beach.” He comes complete with rivets, glasses, and gears. Nice touches to be sure, but a quick browse through Tinkerbot’s photostream and you will see many more steampunk little robots. 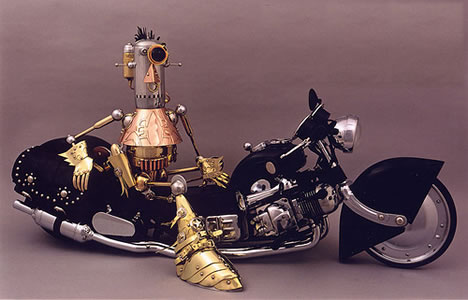 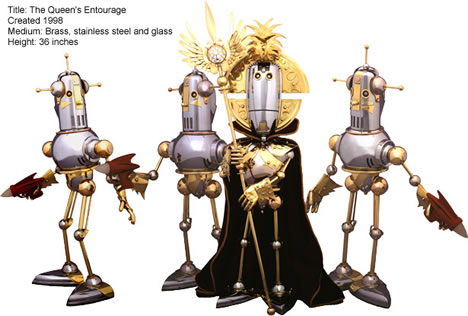 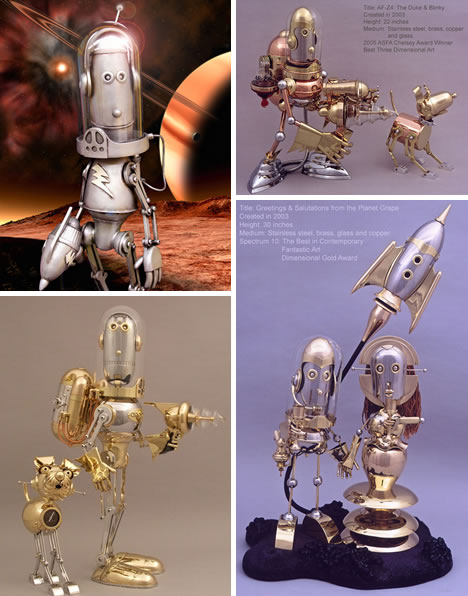 These whimsical free-standing robot sculptures are class ‘A’ cool. Creator Lawrence Northey collects odd bits of information about unexplained phenomena. He says they are something called “ooparts” – peculiar objects of an old scientific measure that somehow appear to be modern. With this out-of-time technology, Northey constructs a fantastic world of robot statues. Then he puts in 99% perspiration of the Edison equation variety. He sometimes spends weeks polishing each individual piece until he achieves the finishes he wants. 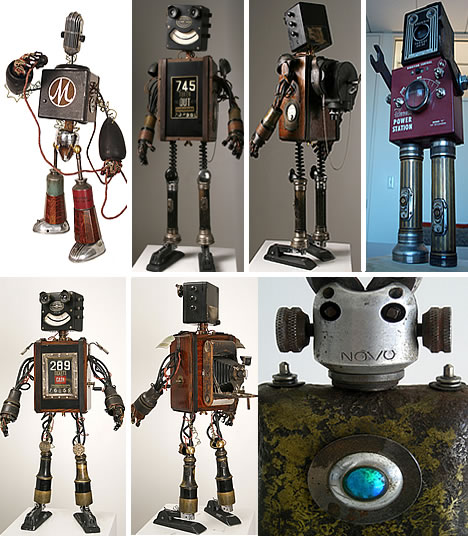 These robots are a product of creative retro-vision, most made with antique parts. With such names as “Max, Edison and Benton,” their boxy bodies are very cool in a happy way like this is the kind of robot you want in the future interacting with your kids. Mike Rivamonte is the creator of most of these boxy bots and slew more on his site. The future meets the past with just a dash of The Time That Never Happened, robot-like spacemen capable of flight and mischief. 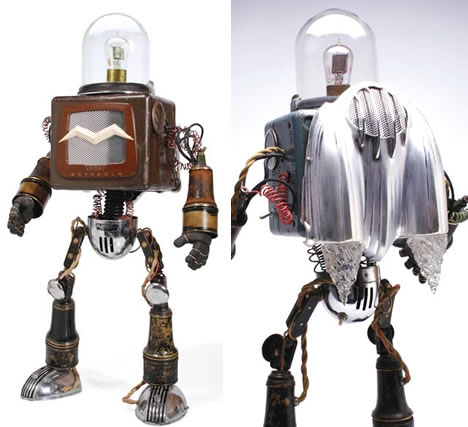 This little in-depth fella was created completely from vintage scraps. It is why every hacked mod, turned into a robot sculpture, is unique. The end result shows what one man, or woman, tosses out as nothing but junk can then land into the hands of a man who uncovers the treasure it was meant to be. 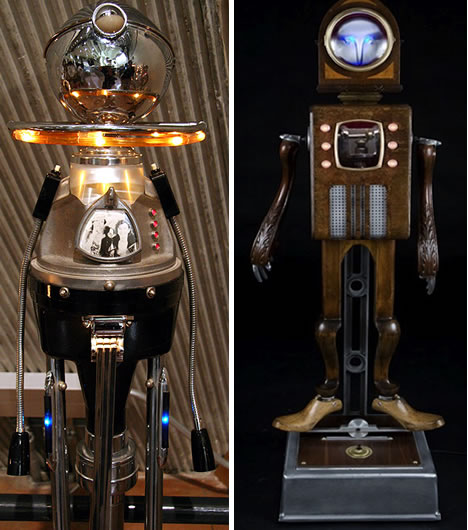 The robot on the left is shiny and it lights up, so we like it. On the right is a product of artist Nemo Gould. Gould’s creations “reflect the images and mythology of comic books and science fiction.” 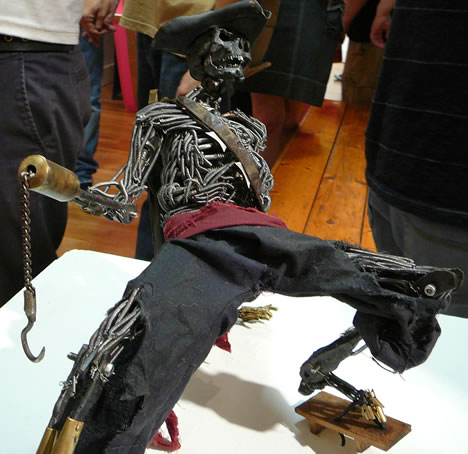 This robot is titled: “Steampunk Robot Zombie Ninja Pirate Action Doll.” That is quite a great deal to live up to, but it is fully articulated and pose-able. He can be made to fish, to fight or just to snarl at the world. It is a metal creation by Matt Norris. 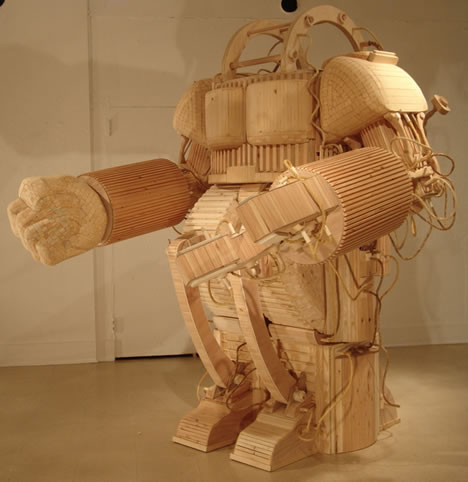 Michael T. Rea designed and built this life-sized steampunk-styled robot, mixing his science fiction idea with the reality of wood. Rea calls it “A Prosthetic Suit For Stephen Hawking.” 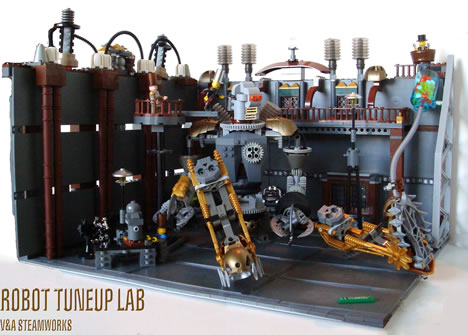 This is an example of mixing steampunk style and Lego. It’s called, “Robot Tune Up Lab.” Click from the image credits to get a bigger view of all the detail of Tesla’s Workshop and little steampunked Lego men. 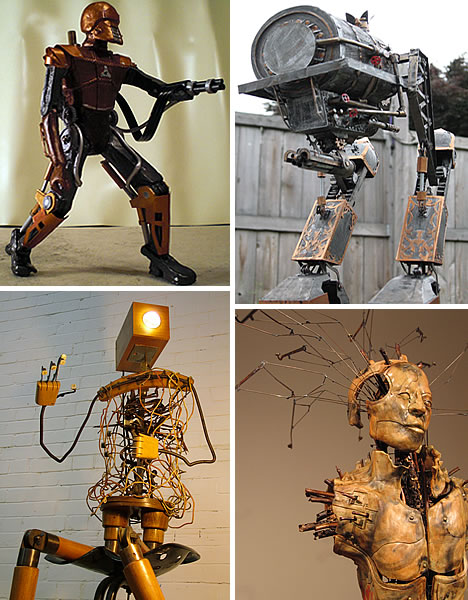 On the top left is a foot-tall Steampunk Cylon sculpture. The robot at the top right is called a “Steampunk Mech.” It was made of all paper put together with glue, stands 11 inches tall, and it took about 30 hours to complete. On the bottom left is a Victorian robot, called “Pharos Cyclops.” The robot on the bottom right is tagged as Neo-Victorian and clockwork. It is titled, “Steampunk Robot Clockwork Man 2.” 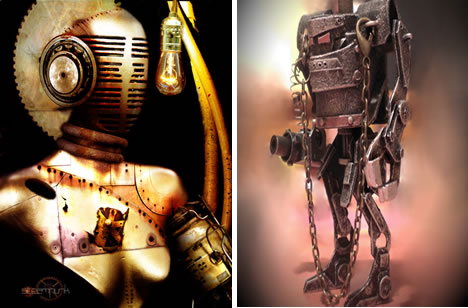 Steampunk robot art is sometimes paper carefully crafted, glued and spray-painted. At other times, these sci-fi robots are digitally created with masterful results. 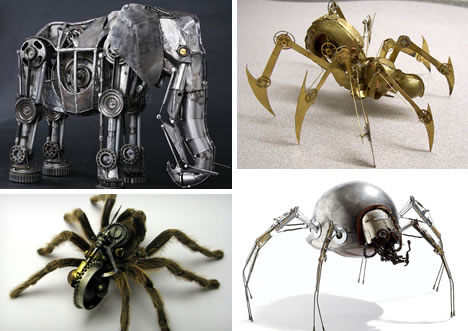 Clockwork spiders seem to be a popular creature in the robot sculpture culture, but elephants are very rare. That unusual elephant sculpture was made with reclaimed materials, sculptured by Andrew Chase. It weighs about 110 pounds and took about 100 hours to build. It is made out of auto transmission parts, electrical conduit, plumbing pipe and 20 gauge cold-rolled steel. Even the ears move. The 4 inch tarantula is made with brass and steel gears, parts, and springs. 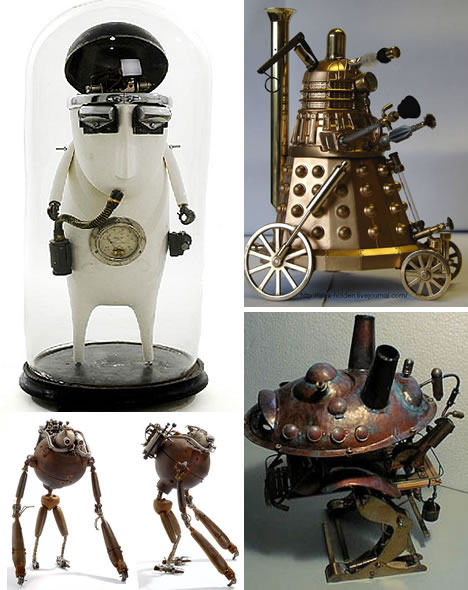 Stehpane Halleux blends cartoons and steampunk style for her creations such as the alien robot sculpture. Tinkerers toil away the hours and then add that kiss of steampunk to their sculptures. Best of all is that most are made from recycled “junk.” The end products range from cylons made from copper and brass to little bots made of leather and metal. 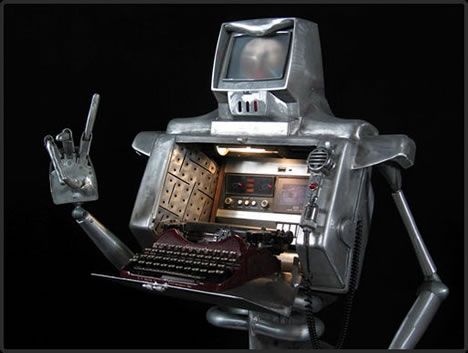 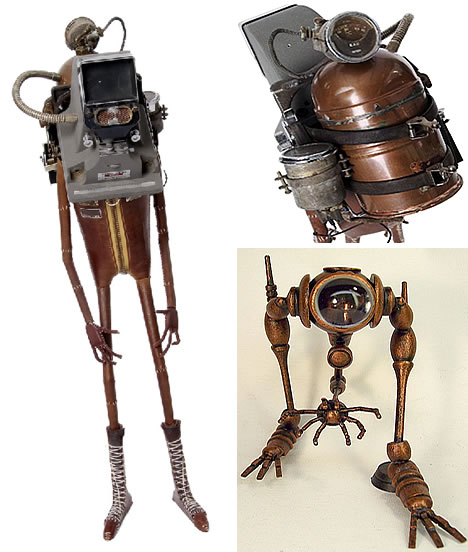