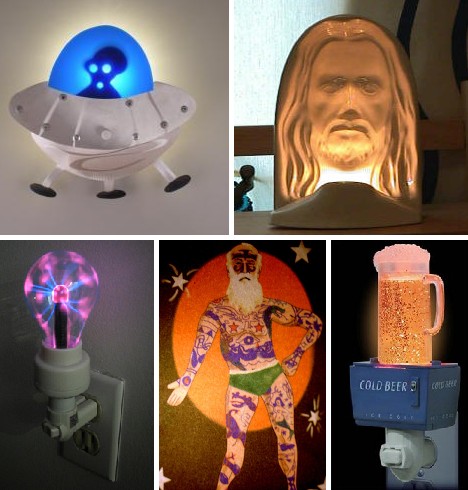 Night lights banish the darkness for young (and old) sleepers who wouldn’t dream of going to bed blindly. These 10 off the wall night lights, on the other hand, show what offbeat artists and geek gadget designers can do when they’re not sleeping on the job. 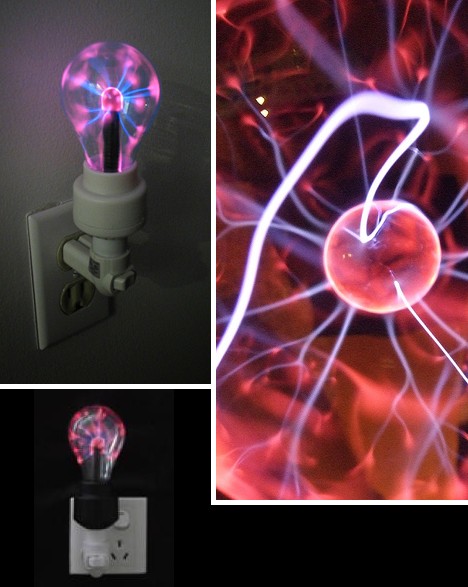 (images via: Gizmodo and Busytrade)

You don’t have to be a geek to use a plasma globe night light but anybody who sees one these babies pulsating away will draw their own conclusions. Seriously though, how cool is a tiny glass bulb filled with neon, krypton and xenon gas with a pedigree that goes back to Nicola Tesla? Stick a plasma globe night light in your room’s AC electrical outlet and reenact the War of Currents while you snooze the night away. 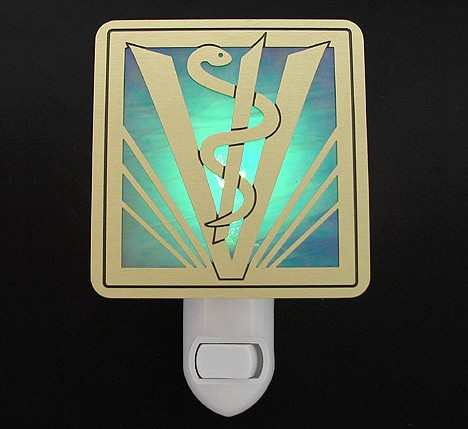 Vet as in veterinarian, not veteran, though if one happens to be both a veterinarian AND a veteran this night light is most definitely for you. Described by the manufacturer, Kyle Designs, as being artistic and contemporary with a dash of Art Deco, these night lights display a modern stylized version of the Veterinary Symbol in intricate etched metal, customizable with a choice of “cool iridescent stained glass color”. Bow wow! 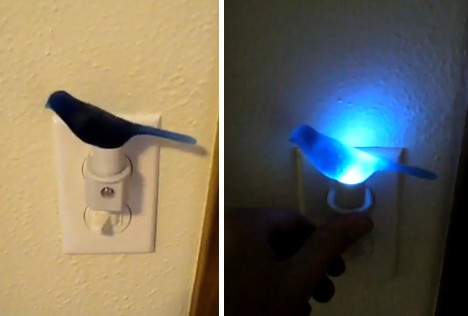 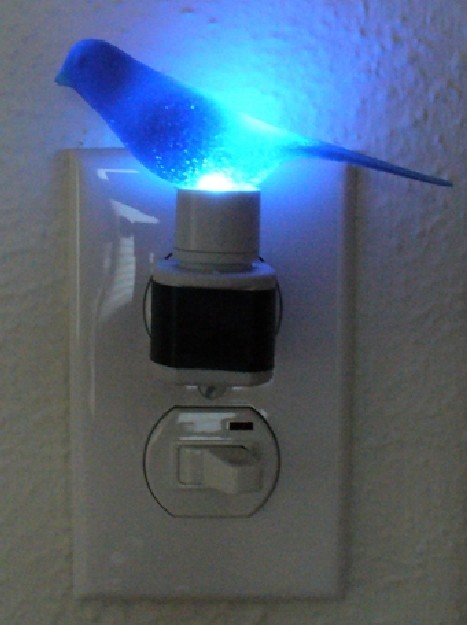 That’s right, a blue canary night light just like the one from TMBG’s “Birdhouse In Your Soul”. You know, “Blue canary in the outlet by the light switch, who watches over you?” One would think the song was inspired by a blue canary night light one of the Johns from They Might Be Giants had when they were a child. Oddly enough, some guy from Minnesota wanted one for his daughter (sure he does) and couldn’t find one for sale, so he decided to make them himself. Here’s a video made by the maker; check it out…and while you’re at it, leave the night light on inside the birdhouse in your soul: 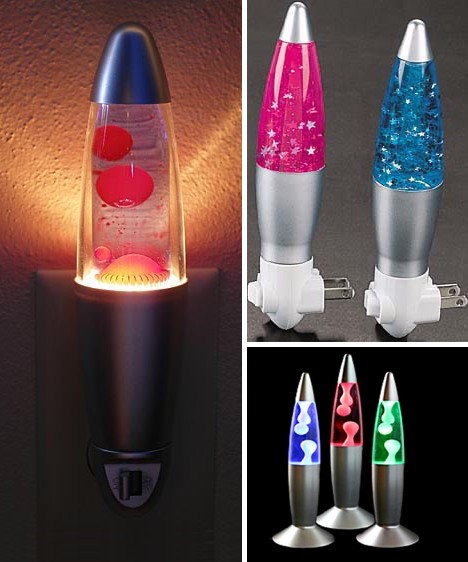 (images via: Amazon, Retrotoys and Squidoo)

Also known as Rocket Night Lights, these shrunken versions of that hoary old hippie icon, the Lava Lamp, have the same effect as downing a dozen “special” brownies – your eyelids will feel heavy, man, far out. By the way, don’t trust anyone who doesn’t fall asleep in over 30 minutes with one of these honeys in the socket. 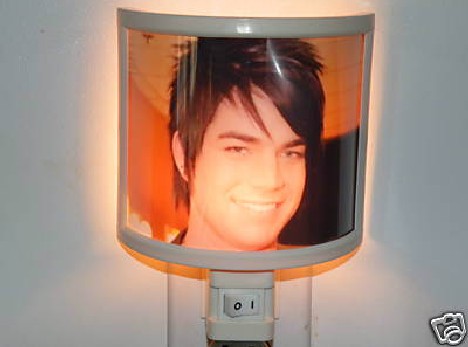 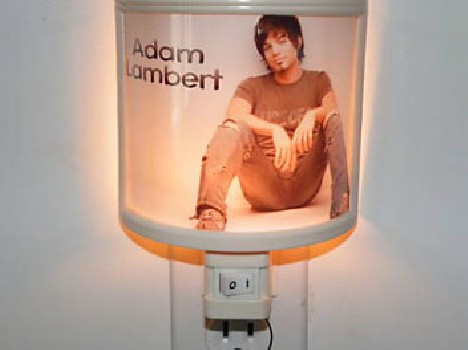 (image via: I Love Adam Lambert)

If Adam Lambert didn’t light up your life before, he surely will now… your night life at least. Honestly, can you think of anything better that having the outrageous pop singer gaze (spell that carefully) at you from across the room? One thing’s certain: you’ll BOTH wake each morning with a healthy glow… not that there’s anything wrong with that. 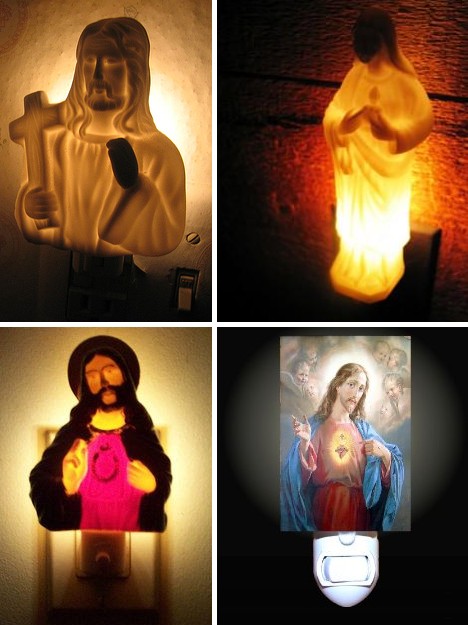 (images via: BCGrady1, Home and Garden Webshots, Clampants and Amazon)

The Lord not only works in mysterious ways, but in luminous ways as well. This small selection of Jesus night lights is just a drop in the collection box – in the area of night lights at least, Jesus is MUCH more popular than The Beatles. Now if only they could be equipped with eternal bulbs…

As for the above product, we’ll just quote from the manufacturer’s ad copy: “This ‘miraculous’ Jesus nightlight is a 3-D image of Jesus, that appears to move & follow you wherever you walk in the room. Your children may receive comfort, security, and relief from those sleepless and scary nights.” Dude, seriously?? Plug this thing in and sleepless and scary nights are pretty much guaranteed. 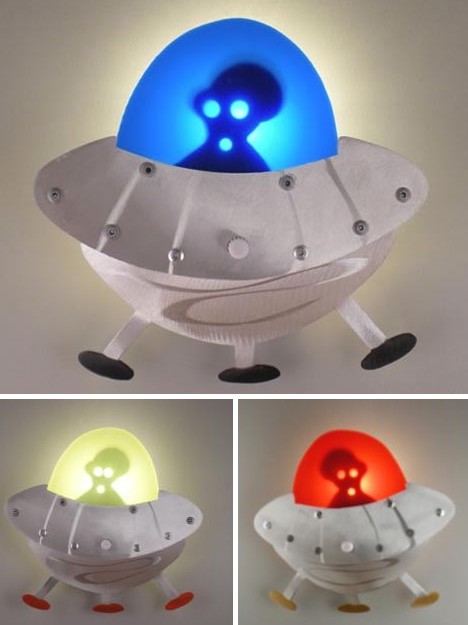 The UFO Night Light comes in a range of colors and features a design that nicely balances fear with fun. Just the thing to induce pleasant dreams or at the very least, a pleasant dreamlike state. Feeling alienated? Troubled by nocturnal space missions? Pick up a UFO Night Light, it’s the next best thing to being rocket to sleep. 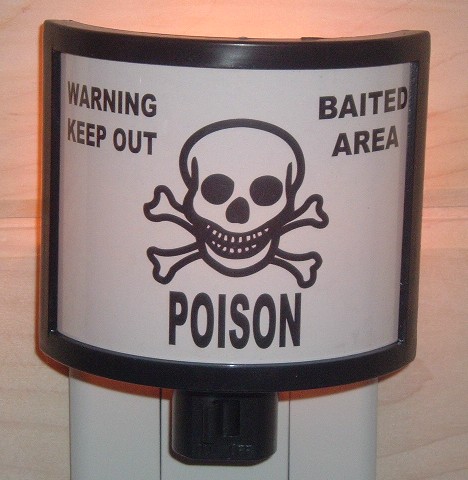 Skulls are “in” as a fashion theme but who knew they’d be in your light sockets? It’s unclear what the manufacturer intended with this theme – are they fostering a love of pirates, or maybe it’s a backlash against irritatingly joyous Happy Face imagery? Well, dead men tell no tales but if little Johnny has been poking around your home’s electrical outlets, this might be one way to deter him. 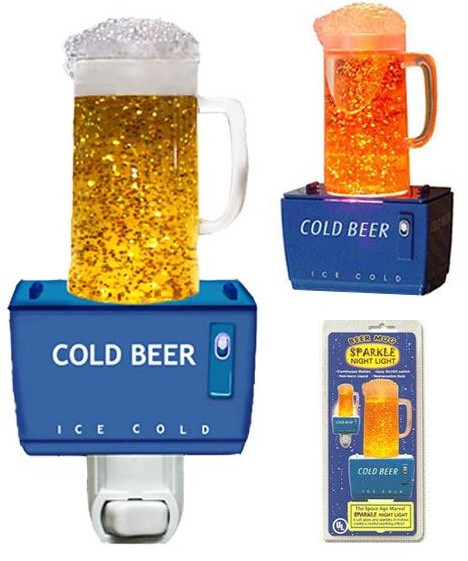 Some like a light beer, other prefer a beer light… the Ice Cold Beer Mug Sparkle Night Light, to be exact. Though not really appropriate for the kiddies, the beer mug night light is a must for adults who have trouble navigating by daylight, moonlight or a squad car’s flashing lights. 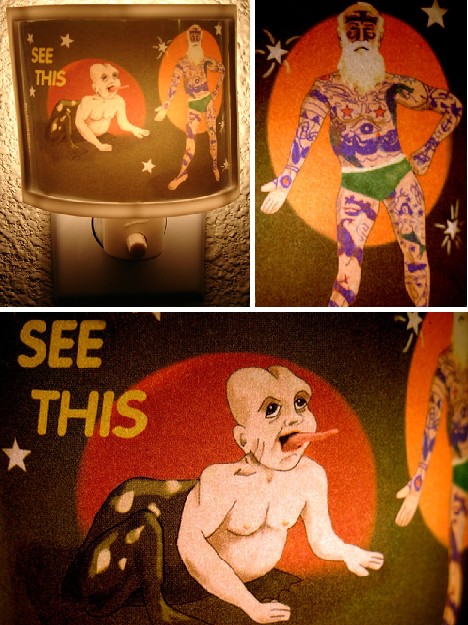 Is it any wonder the above Night Light for Modern Living is sold at Ax-Man Surplus Stores? Actually no… it’s hard to imagine this nightmarish night light would be a big seller, except maybe to parents who really dislike their kids. As for the name, it’s not known what this nightmare light has to do with modern living unless you’re currently living in an asylum, in which case it fits like a straightjacket. Lights out!