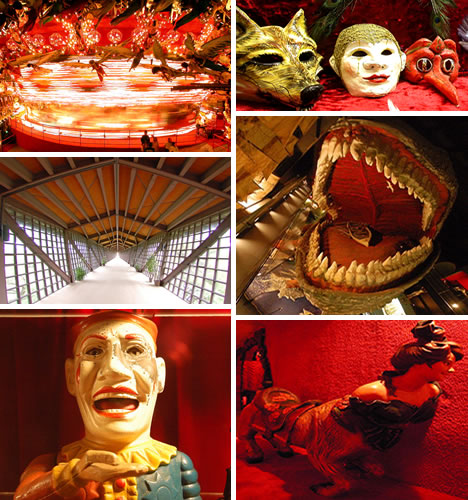 Get ready for sensory overload. Check your sanity at the door. House on the Rock is a manic mishmash of mechanical mayhem. Much like stepping into Oz, only in Wisconsin, a tour through House on the Rock is like something from a drug-induced haze. Some visitors love the bizarreness and some hate it, but here are 48 images of the schizophrenic blend in this freaky destination.

House on the Rock 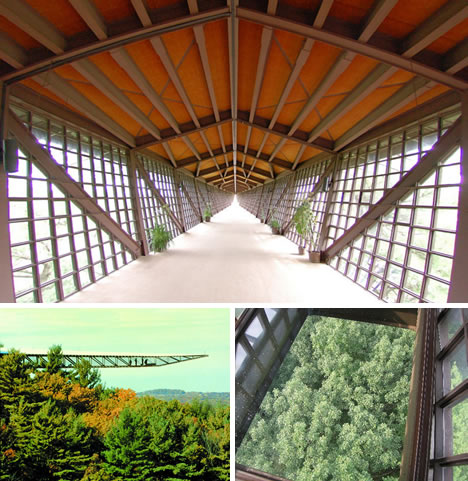 House on the Rock opened in 1959 in Spring Green, Wisconsin. It is a “complex of architecturally unique rooms, streets, gardens and shops designed by Alex Jordan, Jr.” The House sits atop Deer Shelter Rock with a forest nearby. The above Infinity Room was added in 1985, hanging out 218 feet from the House without supports underneath. The end section has a glass floor and the room has over 3,000 windows. This is neither an endorsement to visit, nor a slam, but instead it is a weird trip in complex design that screams, “Bizarro land!” 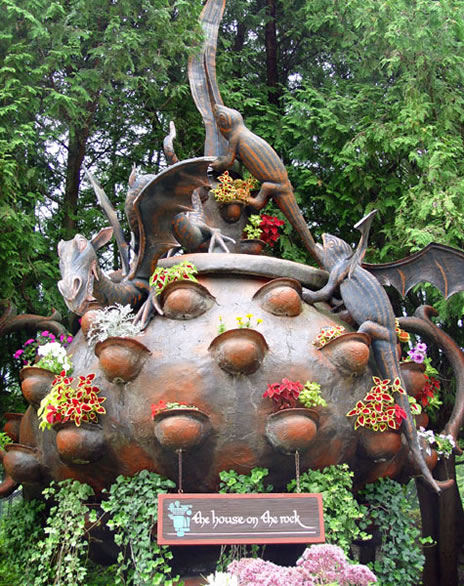 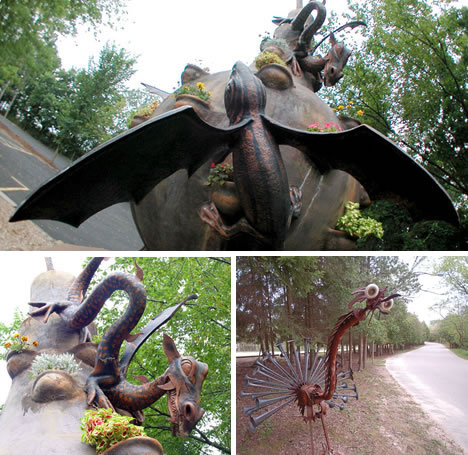 At first glance, it may not seem as if you are about to step off into Oz in Wisconsin. Both of Alex Jordon’s biographers relate a story by a man who was officially proclaimed as the 1976 World Champion Liar. Furthermore, according to Wikipedia, reporter Marv Balousek published a book about House on the Rock and reported: ‘Jordan Sr. hired “drunks and bums” from the Madison street to help blast the rock. Balousek says that according to Sid Boyum these workers were sometimes paid with whiskey and sometimes by check, but that Alex Jordan Jr. destroyed the cancelled checks later to further a myth that he had personally built the house himself.’ 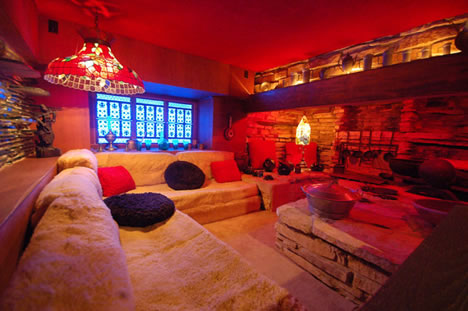 The Gate House is an entryway to the main house. Paying visitors take self-guided tours. The “ultimate 1970s bachelor pad” switches to a Victorian Steampunkish flavor after descending the library steps. Alex Jordan believed that sights and sounds were the most effective means of stimulating the senses. Well get ready for sensory overload and a real life version of a Tim Burton movie. 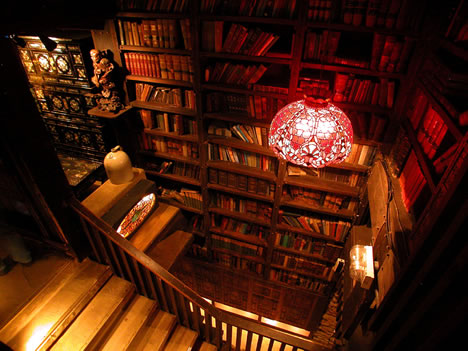 The eclectic maze of rooms include the Mill House, Streets of Yesterday, The Heritage of the Sea, Tribute to Nostalgia, Atrium Restaurant, Music of Yesterday, Spirit of Aviation, and the Carousel. Of course that’s not all. More seriously strange structures include the Organ Room, Inspiration Point, the Doll House Room, the Circus Room, the Galleries, and the Doll Carousel Room. 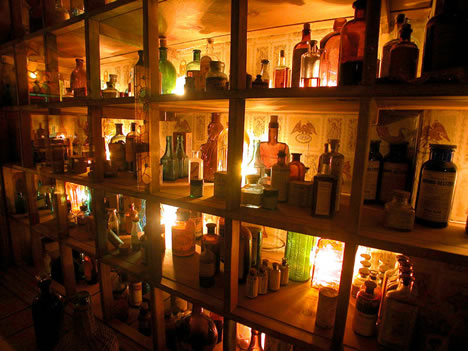 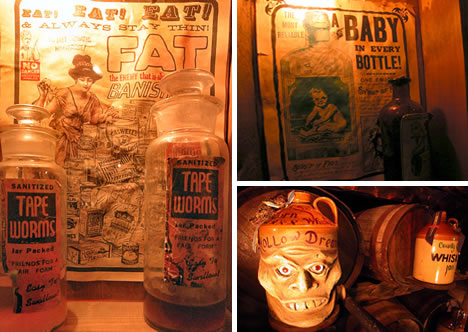 Is there LSD in those bottles? No, but there seems to be about everything else you might imagine. A tour through House on the Rock is like something from a drug-induced haze.

Sheriff keeps a head in a jar? 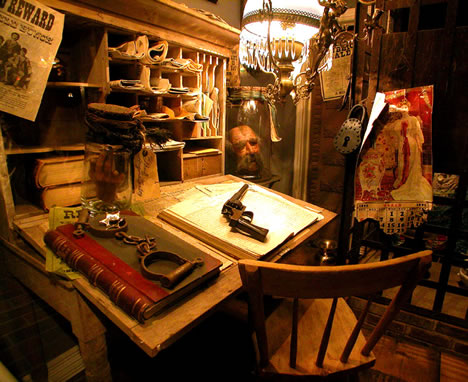 The Sheriff’s Office features a head in a jar. There are also hundreds of guns in all shapes and sizes. This is not even close to as wacky or wonderful as this place gets. Depending upon your perspective, it might seem like a manic mishmash of musty mechanical mayhem. “It’s creepy, beautiful, dreary, overwhelming, and inspiring.” You can check your sanity at the door. 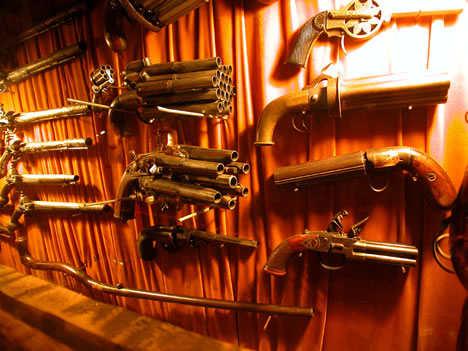 Some tourists seem to love it. Others post trip comments such as, “I came away wondering what was that? It is so totally weird I can not even express it.” Yet other  visitors seem to hate it. Could the controversial opinions be due to that overwhelming WTF feeling it produced?

Puppet Master to Heritage of the Sea Building: 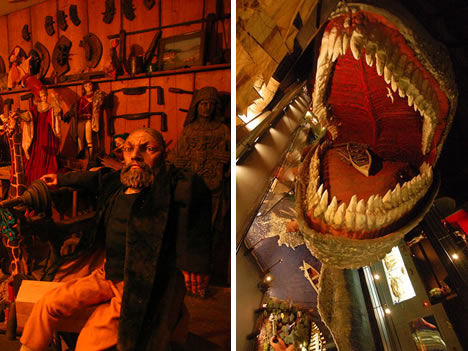 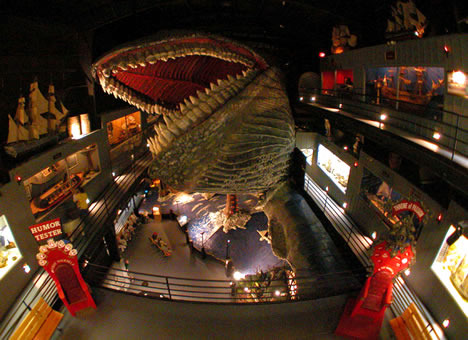 There is a puppet master and his many peculiar marionettes. The Heritage of the Sea building is one of the most popular destinations. A giant sea-monster type whale is centered in the building. It stands 200 feet high, as tall as the Statue of Liberty, in the nautical themed room. Additionally, there is a Titanic display and over 200 model ships.

Automated – Animated Bands Out the Kazoo: 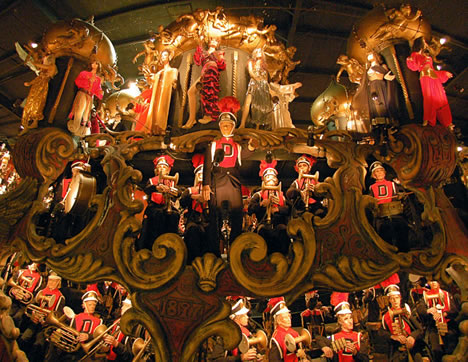 The Circus Room has all things circus. The pyramid of elephants is but one tame example. There is also an automated 40-piece band and an 80-piece orchestra. 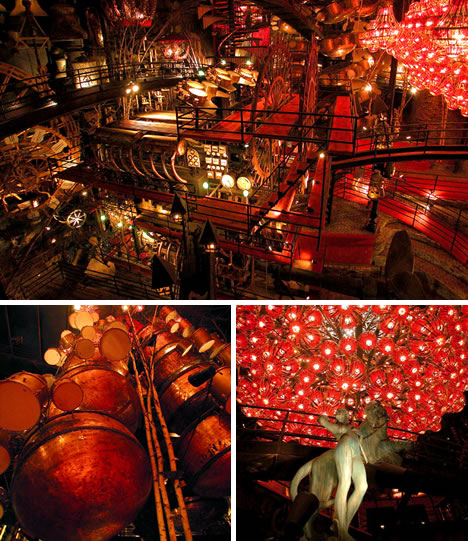 Among knick-knacks, antiques and re-creations, music seems to rule the House on the Rock. The Organ Room is only one of many automated musical rooms surrounded by walkways, spiral staircases, and bridges. 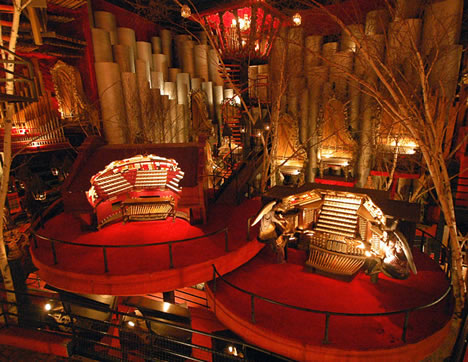 Beside the indoor trees and huge pipes, you can see two of the three theater organ consoles. 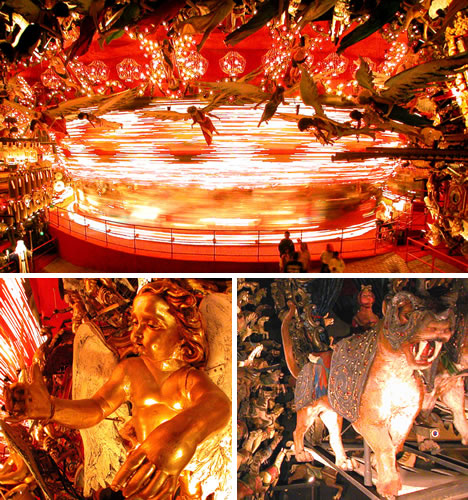 The Carousel at House on the Rock is recorded as the world’s largest. Hundreds of angel mannequins hang from the ceiling as well as 182 chandeliers. 20,000 lights surround the bizarre merry-go-round, heightening that Christmas on crack, drug-induced blur feeling. The indoor carousel has 269 different basts, gathered from all around the world, with none of them being a a traditional carousel horse. 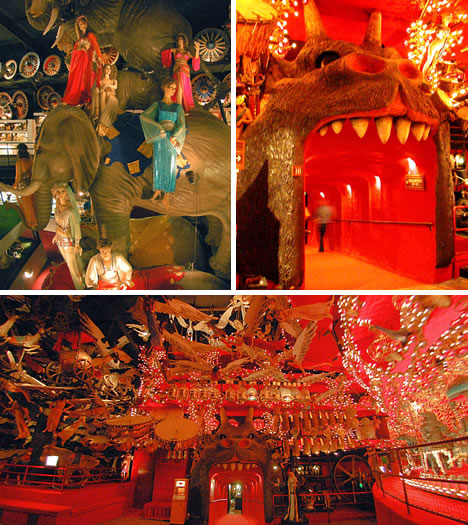 The “mouth” entrance to the Carousel Room leads down a hallway. If a person grows bored, there are elephants loaded down with life-sized Barbies in another room not too far away. 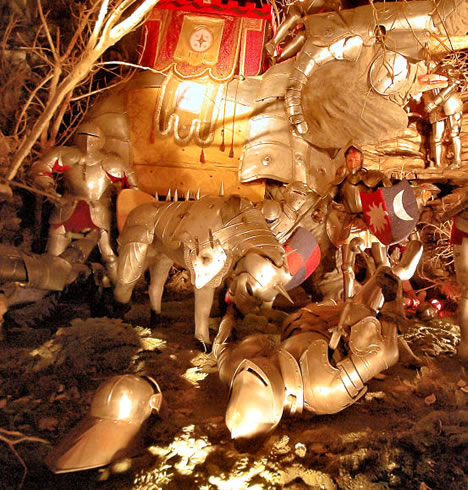 The House on the Rock is a crazy place that you can probably not prepare yourself for, even after a quick search on the web. Every nook and cranny is crammed full of treasures. The walls and ceilings are carpeted or padded with cushions. Was this done perhaps in case visitors go temporarily insane? 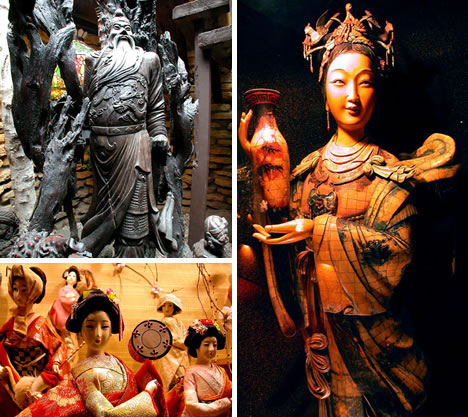 The Music of Yesterday is piped with loud oriental music and animated with robotic musical instruments. If you take a quick detour to one of the restrooms, you will find the walls equally packed with loony yet oddly cool displays. 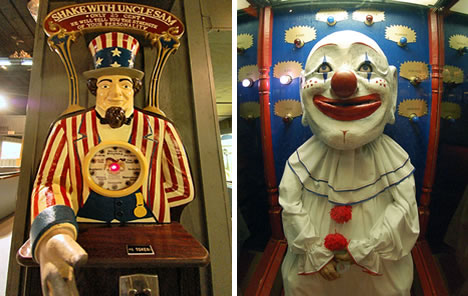 If you aren’t weirded out yet, perhaps a few cheesy stops to shake hands with Uncle Sam or be terrorized by a clown will do it? 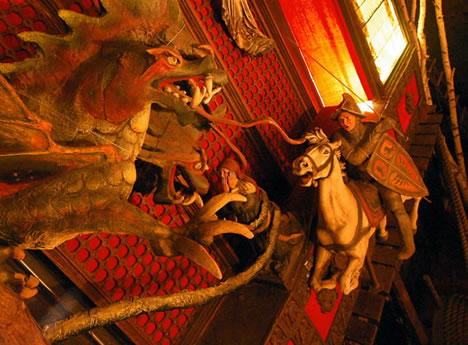 Knights protect the damsels from dragons. All kinds of time periods and all kinds of cultures are jumbled together at House on the Rock. 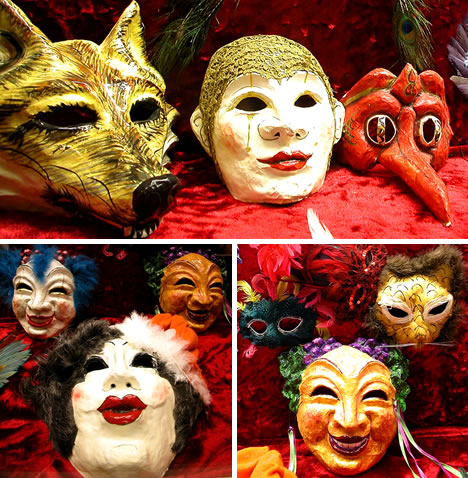 What collection is complete without Mardi Gras masks? 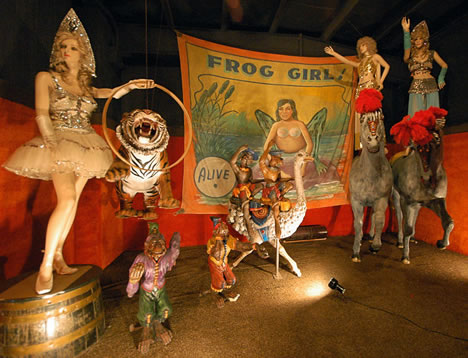 Frog Girl “alive” is probably something you never thought to see. Kids will either come away impressed or distressed and have nightmares. 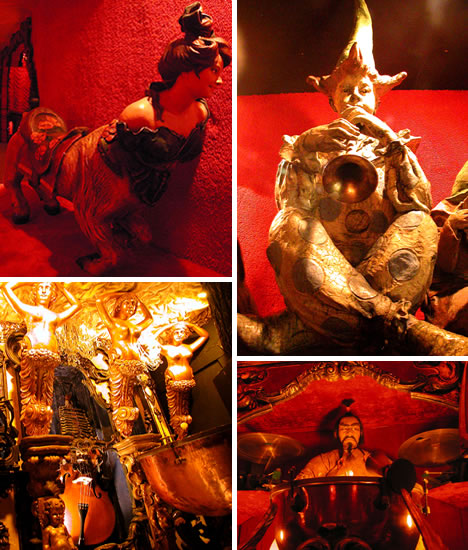 If you weren’t yet completely weirded out by all the eccentric oddities, how about now? 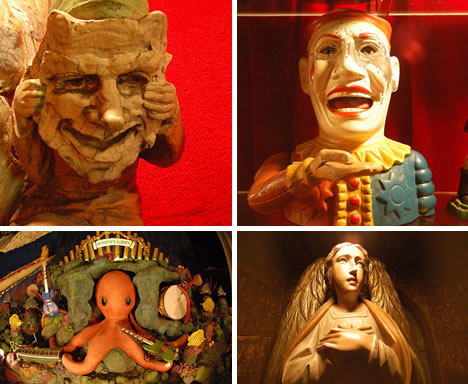 To say this would be a very unique experience is putting it mildly. The schizophrenic blend which makes up House on the Rock is for you to decide if you like it or not. To say it’s extremely odd is surely a safe bet.

A big shout out and thank you to Dave Lyons who kindly gave permission to use his awesome photos!