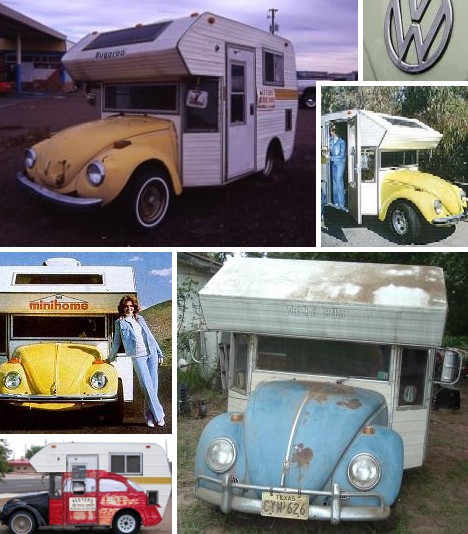 Custom cars, trucks, motorhomes and recreational vehicles were all the rage during the 1960s and 1970s but certain “carhouses” crossed the line into outrageousness as they criss-crossed the country. Among the most eyebrow-raising of the bunch was a VW Beetle RV conversion known variously as the Bugaroo or the MiniHome. 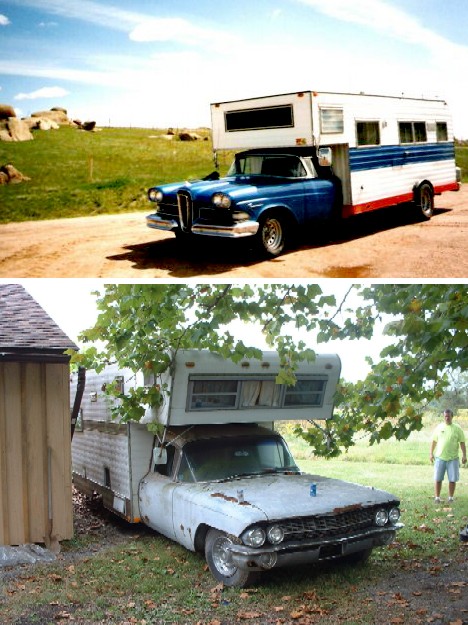 Carhouses or carhomes may have looked odd but the mechanics involved aren’t all that complicated. A variety of cars going back to the early 1950s were transformed into carhouses and most were eminently drivable – not to mention, livable. Take the 1958 Edsel Ranger carhouse above… after remaining roadworthy for decades and racking up hundreds of thousands of miles, it was finally auctioned off on eBay. An E for an E, as it were. 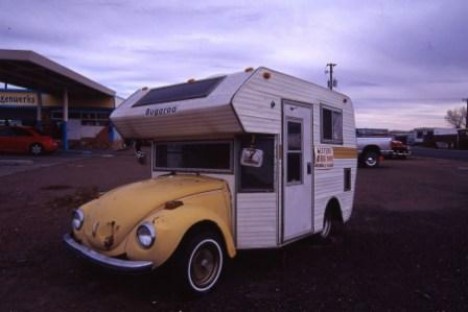 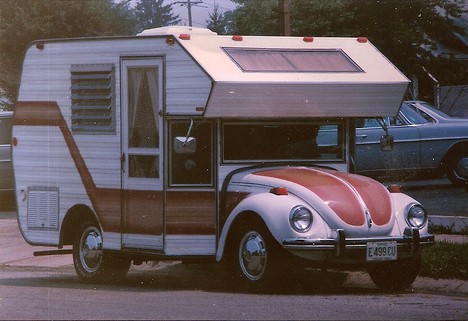 These bizarre love-children of Winnebago-type motorhomes and stock cars look decidedly odd but they’re at their best when the car is large. When the opposite is the case and the car is a Volkswagen Beetle, the results appear cute at first; borderline ridiculous once the surprise has worn off. 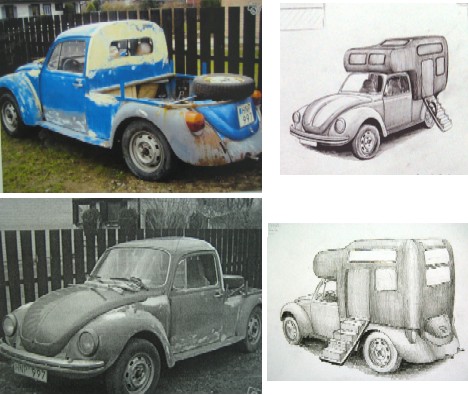 (image via: Per Kristian Nygard)

The simple but tough structure of the VW Type 1 “Beetle” owes much to its genesis as the Everyman’s Car of Nazi Germany in the late 1930s. As the images above indicate, the Type 1 can be modified into a pickup truck without much difficulty, notwithstanding its rear engine. Designs for camper versions were and are remarkably doable. 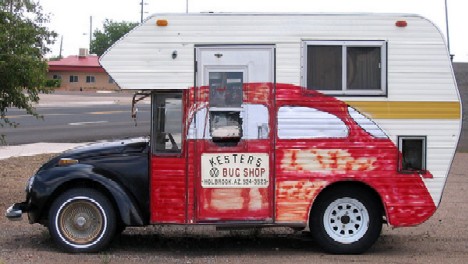 Remarkably visible as well, a salient fact that might have helped convince the owner of the Beetle RV above to apply paint with obvious intent. He’s a rarity, though – sometimes things you see are just so strange no amount of paint can disguise that fact. 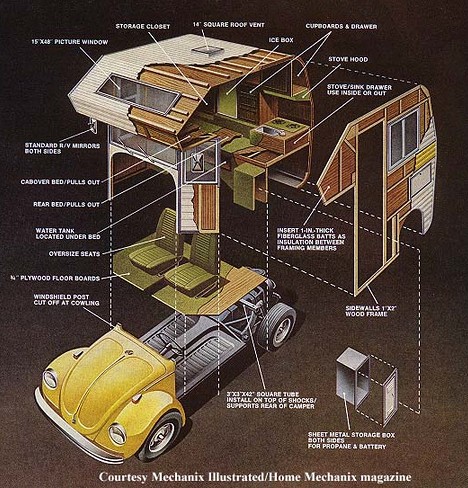 Minihome DIY kits have been available online for some time now, costing $55 with an estimated $1,500 required to go towards the actual construction costs. The exploded view above from Mechanix Ilustrated magazine lays it all out – you provide the VW Bug, however. 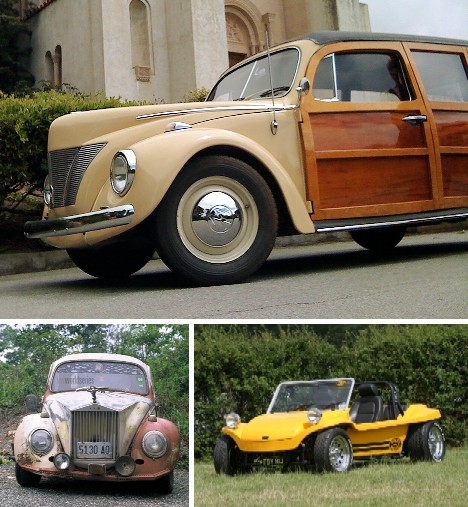 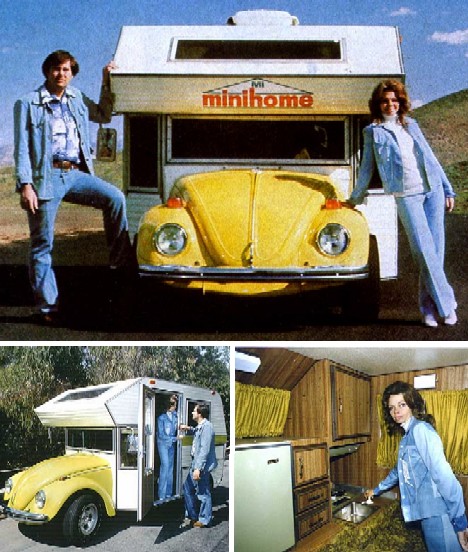 The VW RV was destined to remain a passing fad until Robert Q. Riley happened to pass one on a Los Angeles area freeway. Riley tracked down the manufacturer, who was working out of a small facility in Irvine, CA, and bought the rights to publish the plans. 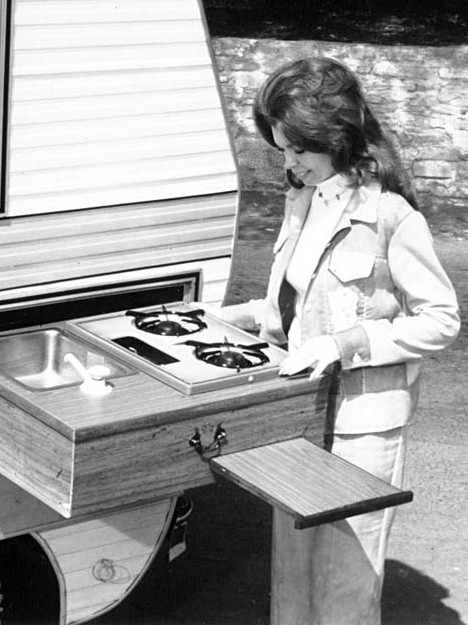 Riley, under the aegis of Robert Q. Riley Enterprises LLC, was thus able to market the conversion without any significant investment in machinery or material. When the popular hobbyist magazine Mechanix Illustrated featured Riley’s plans, the MI MiniHome was born. 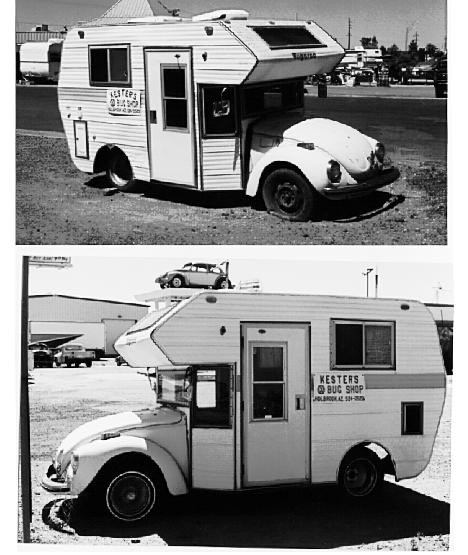 The MiniHome is a tour de force of ergonomic design and space-saving ingenuity, if one can get past the stereotypical 70s Harvest Gold & Avocado Green interior color scheme – the decor is up to the buyer, at least. At 125 inches long, 79 inches wide and 73.25 inches high, the camper offers copious living space that includes a full-size bed in the cabover section. Other VW RV amenities include a slide-out butane stove and stainless steel sink (above), a 50-lb icebox and a closet. 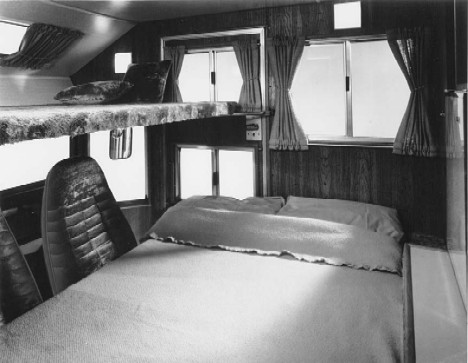 A pair of swiveling captain’s chairs turn 180 degrees, offering access to a modular lower bed in a hideaway compartment under the floorboards. A VW Bug that sleeps four – imagine that! 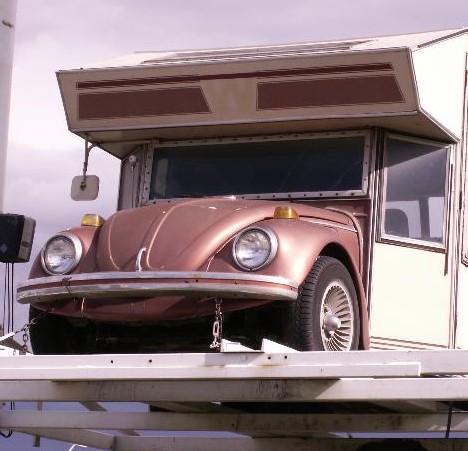 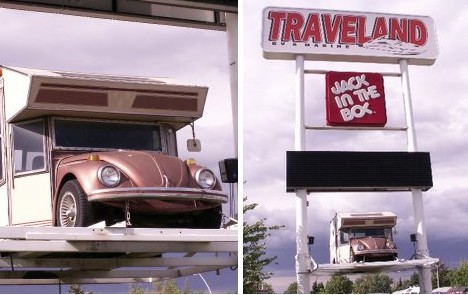 All well and good, but anyone who’s driven a VW Beetle knows it’s no speed demon, nor does it handle anything like other German makes such as BMW, Mercedes-Benz or Porsche. Though owners won’t be taking the MiniHome to any gymkhanas anytime soon, one real concern is keeping up with highway traffic. 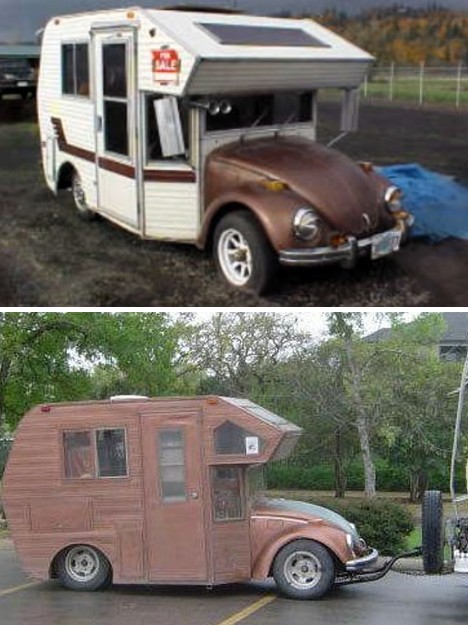 (images via: Jalopnik and Strange Vehicles)

According to Riley, “Maximum speed is reduced about 10 mph, and fuel economy suffers slightly because of increased air resistance at highway speeds.” In other words, passing 18-wheelers on the Interstate is to be undertaken with extreme care. 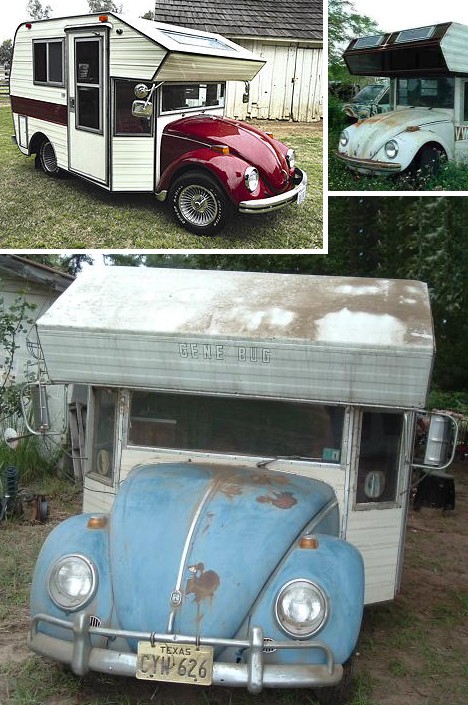 (images via: Volksworld, Gypsy Journal and The Samba)

The MiniHome may provoke a smile, maybe even a snicker or two, but it could be the answer many potential RV owners are looking for. The $1,500 cost for construction materials (according to Riley) is definitely cheap and once one sources a VW Bug in decent shape, the total cost should still be under $20,000 – compare that with the sticker price of a new Winnebago or other full-size RVs. Plus, the MiniHome’s diminutive size will impress those who feel driving a standard RV would be like piloting a cruise ship.