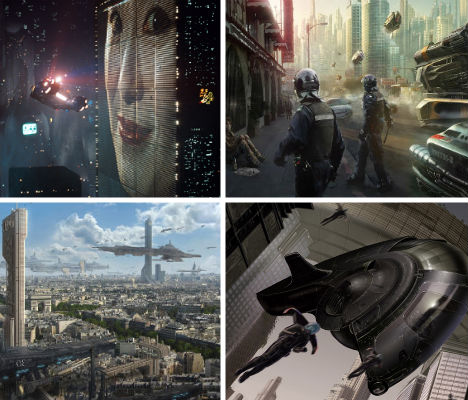 Will the San Francisco of the future be a bleak post-apocalyptic nightmare, or a sparkling eco-metropolis of algae-harvesting towers? How will the world’s largest cities deal with climate change, and how will technology and architecture evolve? Digital artists have widely differing answers to these questions about how urban centers will look as soon as 2018 and as far into the distant future as the year 3000, but they have one thing in common: their visions are absolutely stunning. 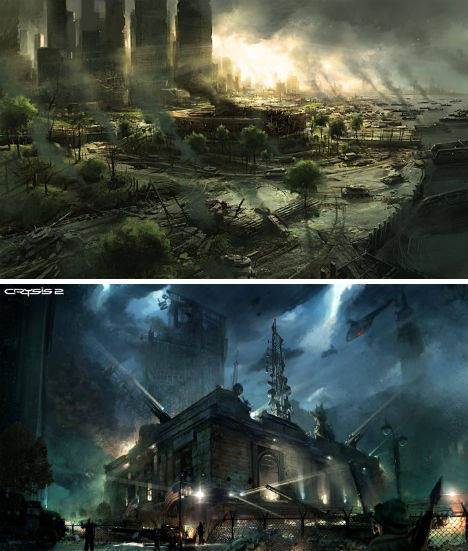 What fun are video games set in clean, pretty settings? Like many of its contemporaries, ‘Crysis 2’ is set in a dystopian vision of the future – this time, in New York City. Familiar places like the New York Stock Exchange, Battery Park and Central Station are depicted in the aftermath of climate change destruction circa 2020. Oh yeah, and if that weren’t bad enough, aliens swooped in and took over while humans were at their weakest. 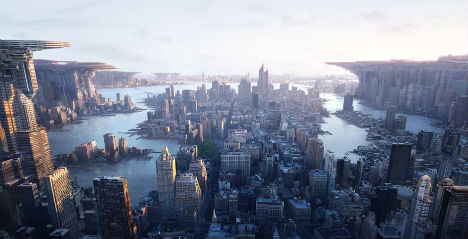 By the year 2150, will Manhattan look more like a space-age Venice than the clearly-defined island it is today? In this digital painting by artist Dylan Cole, it seems that the Hudson River has overtaken much of the land, with strange tall clumps of buildings rising up like mushrooms. But hey, at least there are no aliens.

New York in The Fifth Element 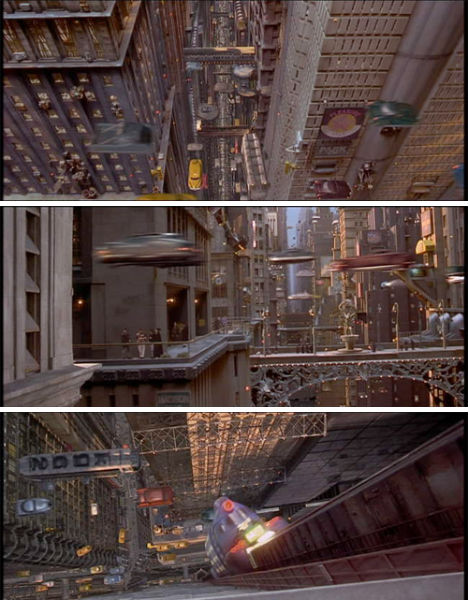 It’s the 23rd century, and New York is still recognizable, but super-shiny and packed full of fun gadgets and technology like flying cars. In The Fifth Element, the city has been excavated to reveal formerly subterranean subways and utilities, placing everything that was once at street level 100 feet into the air. 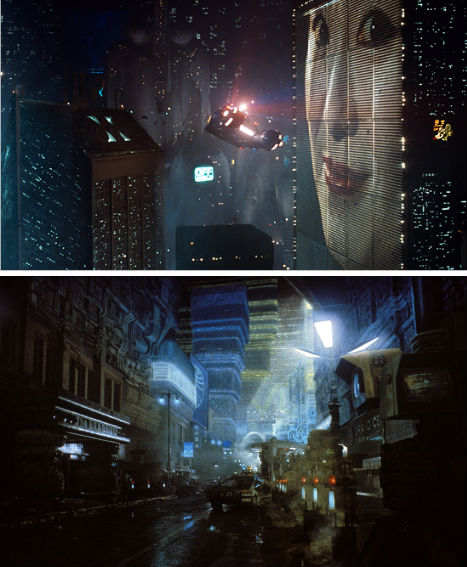 We’re a mere 9 years short of the year that Ridley Scott’s iconic film version of Philip K. Dick’s ‘Bladerunner’ takes place, and Los Angeles is certainly nothing like the dark, squalid and highly technologically advanced metropolis imagined in the movie. Considering all the pollution and murderous replicants, that’s probably a good thing, but the futurists of the ’80s would have been awfully disappointed in our lack of progress toward flying cars and buildings that reach miles into the air. 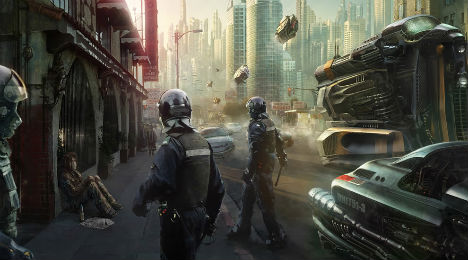 It’s almost recognizable as today’s Los Angeles – except for all of those bizarre and frightening armored flying vehicles, and the sheer height of the skyscrapers. Renowned concept artist Tim Warnock created this scene for an unknown project. 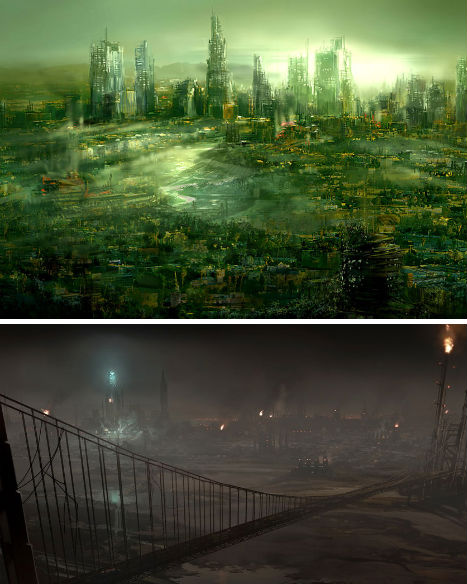 Things get really, really bad in America between today and 2018 thanks to Skynet’s killing machines. In Terminator Salvation, both Los Angeles and San Francisco get blown-up, ashy, ruinous makeovers as imagined here by concept artists Martin Laing and Christian Alzmann, respectively. 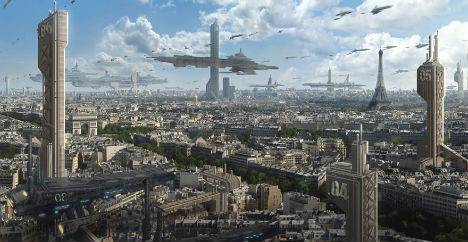 The year 3000 is so far into the future, we can’t even wrap our brains around just how much things could change by then – but artist Ken Lebras’ hopeful prediction of Paris sees today’s landmarks like the Eiffel Tower and the Arc d’Triomphe preserved amid a crowded but somehow still orderly cityscape of skyscrapers and aircraft.

A Sound of Thunder: Chicago 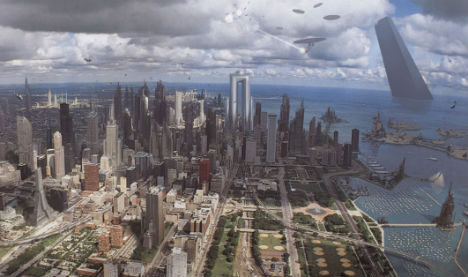 It didn’t exactly receive rave reviews, but the 2005 film ‘A Sound of Thunder’ based on the story by Ray Bradbury did have some interesting ideas about what Chicago will look like in 2055, illustrated in this digital concept. 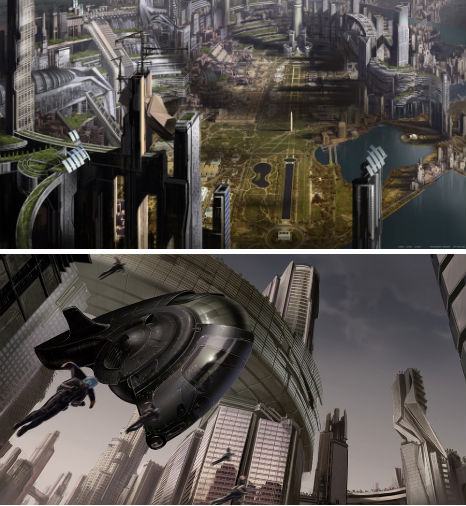 We already have the groundwork for a lot of the technology featured in the eye-candy-dystopia that is Washington D.C. in the film Minority Report, but a change this dramatic in America’s capital city by the year 2054 may be a bit of a stretch. Still, it’s an interesting vision of what could be to come in the more distant future. 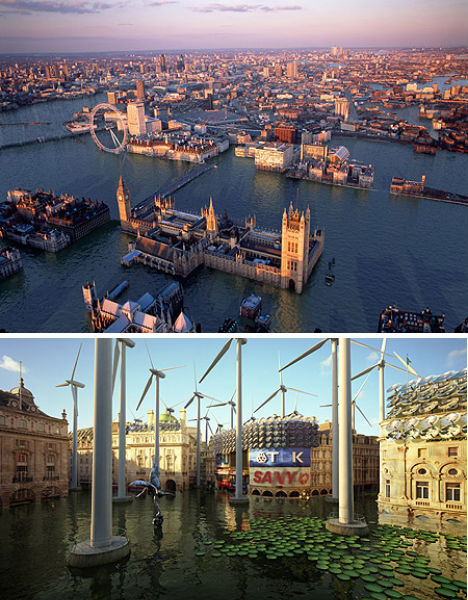 Like so many of the world’s biggest cities, London will likely have to contend with rising sea levels, and the adaptation may be painful. Visualization company GMJ created a series of images depicting what the city might be like as climate change takes its toll, in the hopes of inspiring dialogue about the pressing problem. 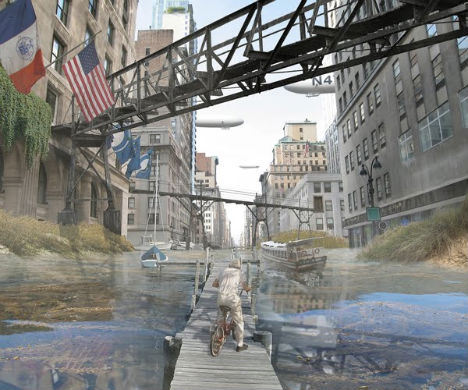 If cities like Tokyo are really forced to adapt to climate change-induced flooding, what will come between their current incarnations and the sci-fi architecture that we imagine for the future? Perhaps hastily constructed catwalks and boardwalks, in addition to canoes and water taxis a la Venice will have to do for a period of time, as in the Aqualta project by Studio Lindfors. 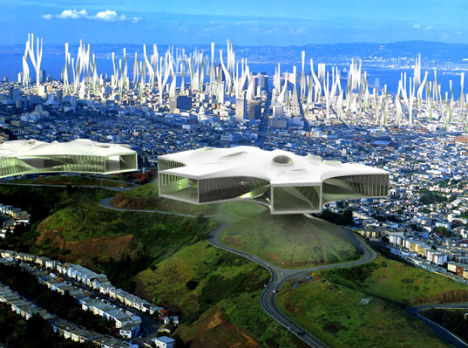 Not all concepts of future cities have to be depressing. IwamotoScott Architects envisions a totally transformed San Francisco for the year 2108 with spindly shell-like algae-harvesting towers and even fog catchers that distill fresh water from the city’s misty gray air.

Trekkies everywhere drooled in excitement when the trailer for 2009’s Star Trek film debuted – well, everywhere except in San Francisco. Apparently, certain Bay Area residents were less than thrilled to see that their hard work keeping mega-structures out of the city’s skyline was all for nothing… three hundred years into the future… in a fictional story. 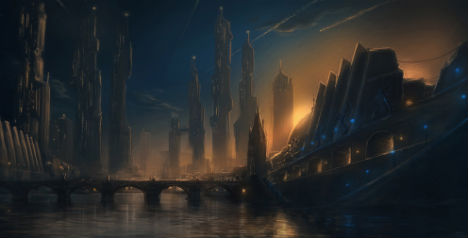 Digital artist Tomas Honz gives us a fascinating peek at what his hometown of Prague, Czech Republic might look like in the future. Illuminated by a golden sunset, Honz’s jagged key-shaped towers and alien waterfront buildings take on a romantic glow. 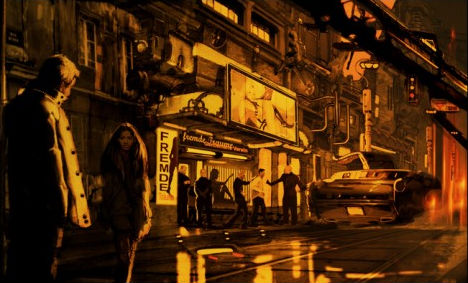 In an upcoming sci-fi film called ‘Mute’, the follow up to Duncan Jones’ 2009 ‘Moon’, Berlin gets the dystopian treatment with bleak futuristic architecture and technology inspired by the director’s favorite film, Bladerunner.