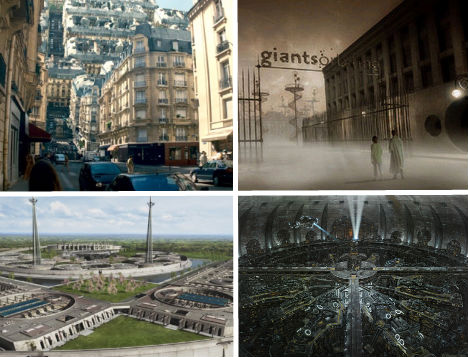 For the imaginary architecture of fiction, anything goes – whether sparkling dream-like utopias or the sort of gritty dystopian settings that would wake you in the night with a racing heart. Some of these 12 sci-fi and fantasy cities are literal dream and nightmare cities in that they are experienced outside the waking world, and others are simply so beautiful or so terrifying that they could easily have sprung from the depths of the subconscious mind. 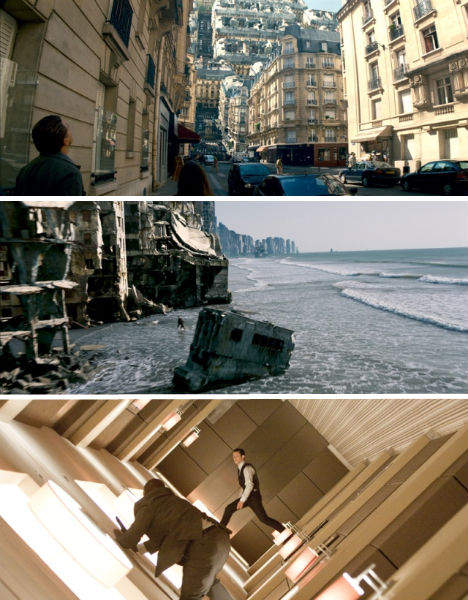 In Christopher Nolan’s film Inception, a pivotal character named Ariadne is the Architect, who creates stunning dream cities through which dream hackers chase their marks. For limitless dream architecture, these virtual cities may seem a bit restrained – they’re not the gleaming futuristic urban city centers of most sci-fi films. But there’s a reason for that: it’s unsettling to see the world as we know it completely untethered by rules like gravity.

The City of Lost Children 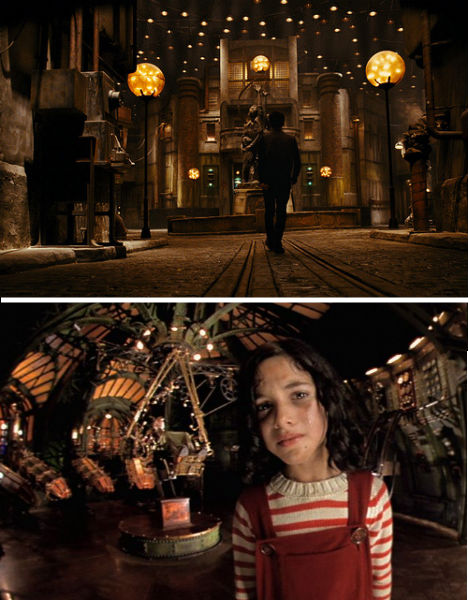 Like so many other films set in gritty dystopian cities, The City of Lost Children has a tinge of Metropolis-inspired German Expressionism. In the film, scientist Krank sends out ‘Cyclops’ minions to kidnap little children so he can steal their dreams. The setting is misty, murky and grimy – so surreal and nightmarish, it seems as if the children’s dreams wouldn’t be pleasant enough to please Krank anyway. 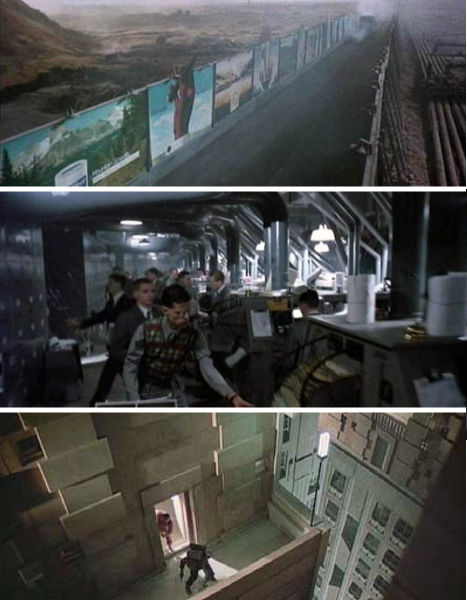 Described as a ‘dystopian satire’, Terry Gilliam’s Brazil has all the trappings of a 1984-esque, technology-reliant city of the future with a totalitarian government – but it doesn’t take any of those things too seriously. It’s not set in Brazil at all but in a fictional Britain largely inspired by Fritz Lang’s Metropolis. The architecture is eccentric and over-industralized to a comical degree with seemingly endless superfluous metal pipes and ducts. 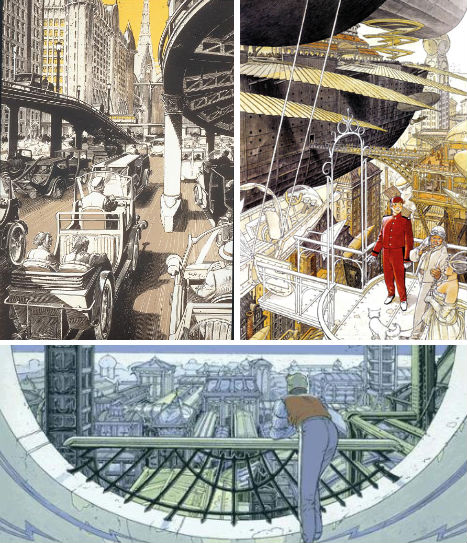 For his ongoing comic book series Les Cites Obscures, Belgian artist Francois Shuiten draws inspiration from his love for architecture. These ‘Obscure Cities’ are versions of cities here on Earth but are ruled by architects, hence the emphasis on beautiful buildings. 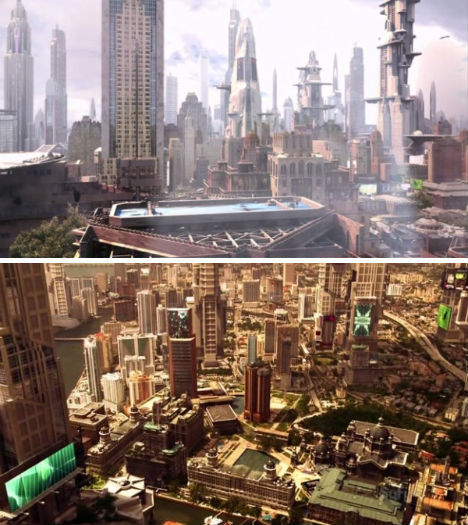 If Battlestar Galactica prequel Caprica’s namesake city looks oddly familiar (and you’re not a sci-fi fan), there’s a good reason for that: it’s an amalgam of real-life Vancouver mixed with a little Seattle and New York with heaps of sci-fi touches like spaceports and high-elevation walkways. Contrasting with the war-torn setting of Battlestar Galactica, the urban Caprica shines with prosperity and the promise of technology. 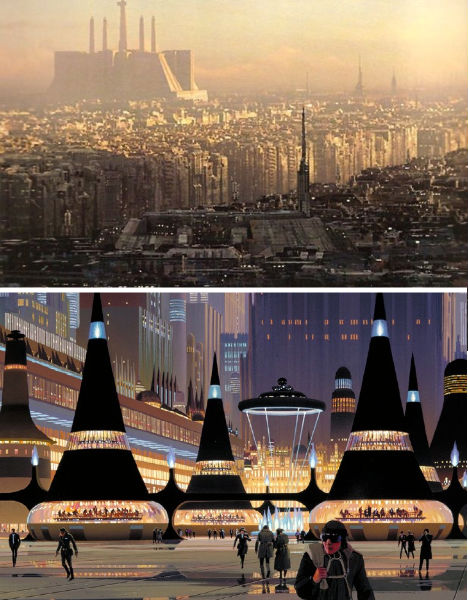 The planet Coruscant, capital of the Old Republic, the Galactic Empire and the New Republic,  served as much of the setting for the film Star Wars Episode IV: A New Hope and will also play a large role in the upcoming live-action Star Wars television series (if it ever gets off the ground). These drawings by Star Wars concept designer Ralph McQuarrie provide a peek at the part of the city that will be depicted in the series. 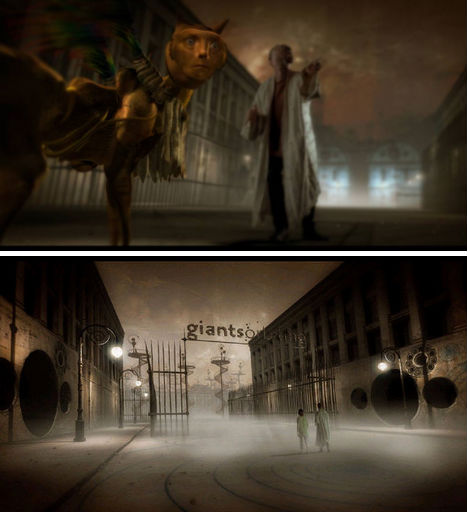 In Neil Gaiman and Dave McKean’s, 2005 film MirrorMask, the heroine Helena finds herself dragged into a bizarre dream world, where she must find the mask in question in order to save the City of Light and the White Queen from the evil Dark Queen. The aforementioned ‘City of Light’ is the sort of fantastical vision that you’d expect from this team, packed with strange creatures and physical impossibilities. 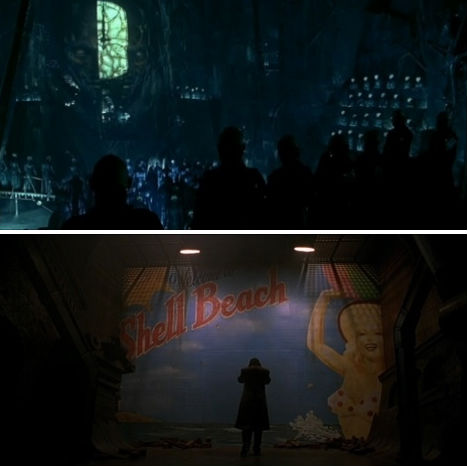 As the title hints, the setting of ‘Dark City’ is just as important an element in the story as the characters, though it’s so pitch black all the time, you don’t get a great look at it. A confusing dystopian urban metropolis, Dark City is more nightmare than reality. 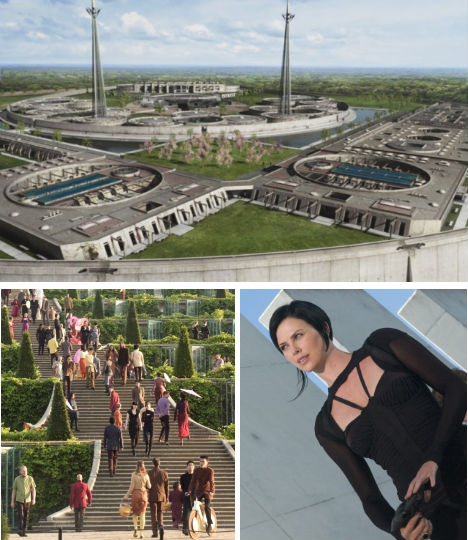 400 years into the future, humanity has been wiped out by disease – except for the population living within the walled city of Bregna, a city that is utopian in its lush green aesthetic but dystopian in its iron-fisted government. The architecture in Bregna – at least in the 2005 film – is reminiscent of current eco-friendly architectural concepts. 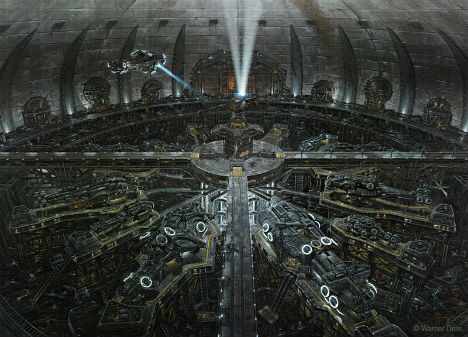 In The Matrix, the last refuge of humanity was far less pleasant than Bregna. Zion, built 4km under the earth’s surface, is heavily reinforced to protect against ongoing attacks by the Machines. Technically, in this case, Zion is reality while the pleasant world of The Matrix is a dream or false vision. 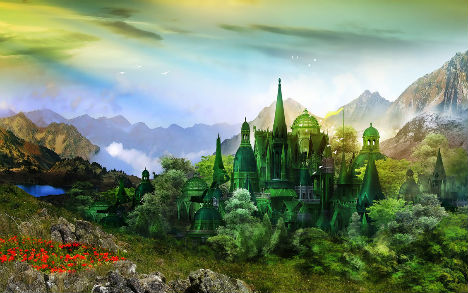 The dazzling Emerald City appears almost too perfect, shining from afar with its green glass and jewels, but of course – as with most of fiction’s most interesting locations – it’s not what it seems. While in the film The Wizard of Oz, The Emerald City (and the rest of Oz) is just a dream, in the books, it’s a very real place. 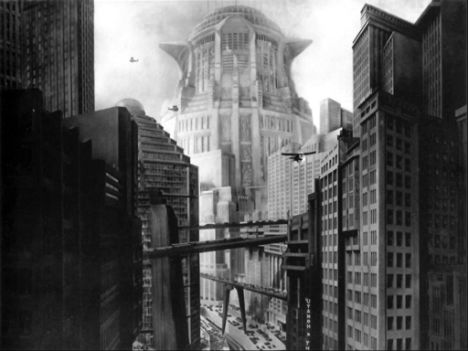 The futuristic, modernist and somewhat Art Deco mega-city of Metropolis warned of what could come of unchecked expansion and industrialism, showing how a seemingly utopian city could ultimately become dystopian nightmare of dehumanization. Lang said of the setting, “Metropolis, you know, was born from my first sight of the skyscrapers of New York in October 1924… I thought that it was the crossroads of multiple and confused human forces, blinded and knocking into one another, in an irresistible desire for exploitation, and living in perpetual anxiety.”