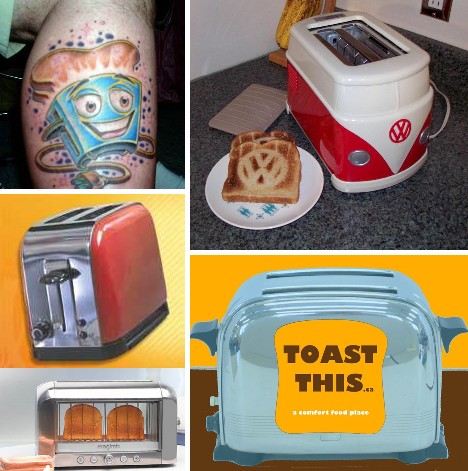 Toasters have come a long way from being stereotypical unwanted wedding gifts. These 10 preposterously pimped-out toasters take this most iconic of kitchen appliances to new levels of awesomeness – one might even say they’re the best things since sliced bread!

The ‘Sweet Toast Of Mine’ Toaster 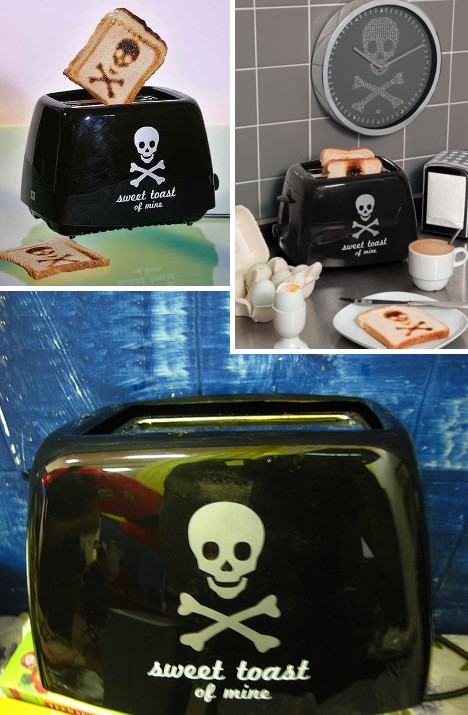 How about some Sweet Toast Of Mine for that sweet child of yours? Or something to that effect, anyway. Guns & Roses doesn’t seem to have any connection with this little bit of skullduggery – or with the gothic toaster pictured above, either. Appealing to fans of Rocky Horror all the way to Twilight, the Sweet Toast Of Mine Toaster will burn itself into your heart; much the same way it singes a skull & crossbones into your morning toast… presumably served by Lurch himself. 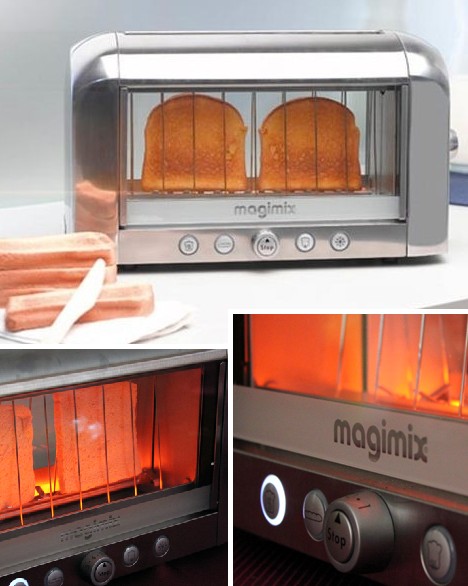 (images via: ShoppingBlog and Fast And Food)

There are a couple of ways to turn a utilitarian appliance like a toaster into something worthy of the upper crust: one is to stick a French “Le” in front of its name, the other is to make the toaster semi-transparent. Magimix has chosen to cover both the bases with Le Toaster Vision. Ideal for those who obliviously risk cataracts by watching their microwave ovens in action. 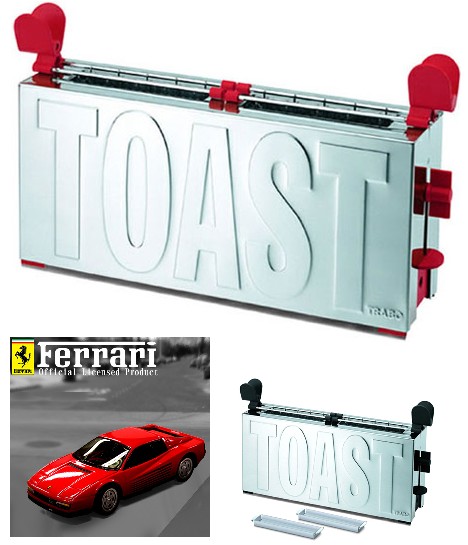 (images via: Trabo and PR News)

Introducing the Tostapane from Trabo, the Testarossa of toasters! Well, maybe the comparison is a bit forced but hey – they’re both Italian, each features Red as its primary color and as for performance.. do you really need to ask? Designed by Gae Aulenti, this retro-futuristic toaster is constructed from stainless steel, features an automatic timer, comes with a removable crumb tray and the handles are formed from heat-resisting material. It also comes with black trim but then, how could we make Ferrari references over breakfast? 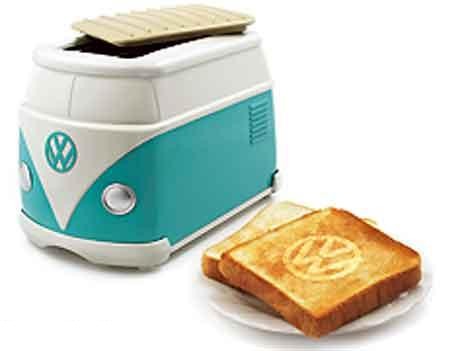 Slip on a tie-dyed t-shirt, slap Terrapin Station on the turntable and fire up the Volkswagen Toaster, its time for some Grateful Bread! Yes indeed, the Volkswagen Original Minibus Toaster is an official VW item that’s not sold in retail stores, instead being offered by VW dealers in Japan each year to the first 5,000 customers who bring their car in for an inspection. 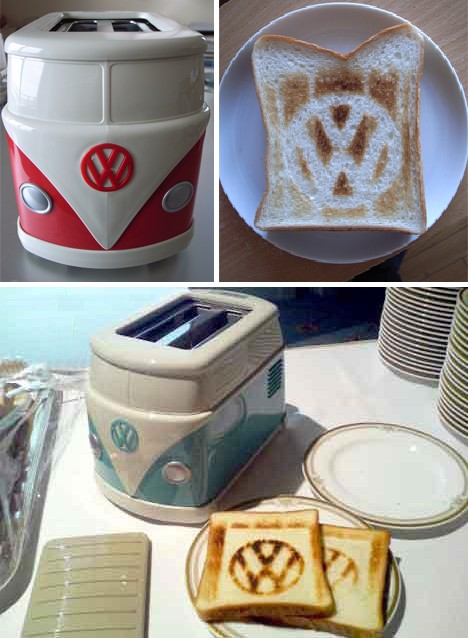 Supposedly VW provides these uber-cool toasters in a different color each year – by diligently following your maintenance schedule you could build up an enviable collection. Don’t bogart that toast, my friend… and pass the Cherry Garcia. 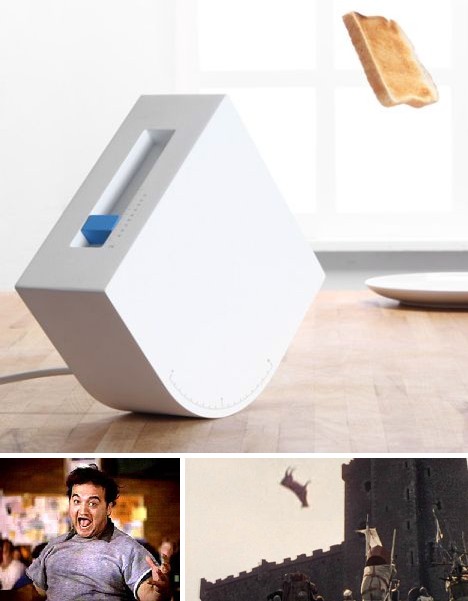 “The Trebuchet Toaster brings knowledge, skill and anticipation to the toasting of a slice of bread; set angle and force to exactly hit your plate.” Allrighty then… as one item in an artistic appliance series called The Brunch, the Trebuchet Toaster would seem better suited to Delta House’s kitchen than to yours. Just be glad it doesn’t dispense hot coffee… or cows. 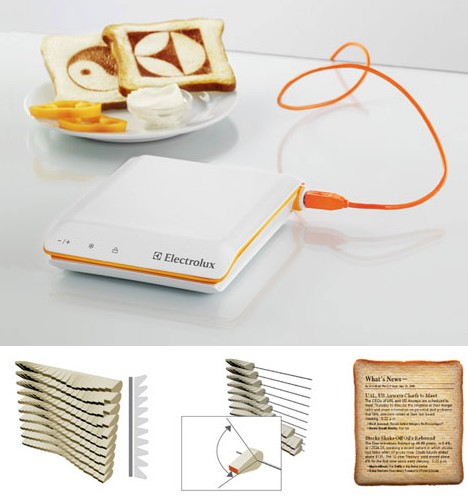 (images via: The Register – Hardware)

The Scan Toaster is a creative collaboration between Swedish home appliance manufacturer Electrolux and Korean designer Sung Bae Chang. Inside a clamshell-shaped toaster that takes just one slice of bread at a time you’ll find a network of toasting modules individually heated by miniature heating elements. Simply select your desired image or text and download the file to the toaster (how weird does THAT sound?) Then just “print” the file, spread some butter & jam, and dig in. 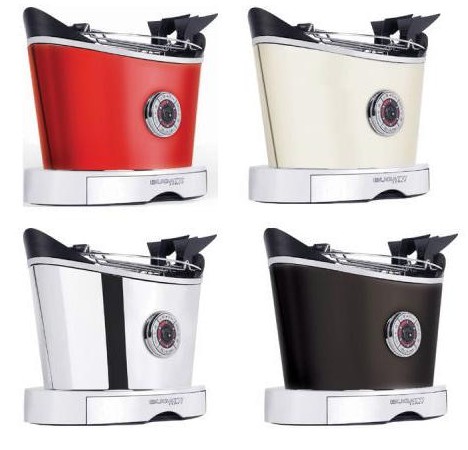 The $300 Bugatti Volo Toaster is, well, the Bugatti of toasters. Available in a variety of car-like colors set off by attractive polished chrome and matte black ABS plastic trim, this toaster will add flashy Italian style to any kitchen. The question is, does your kitchen have the decor cojones to match this toaster? 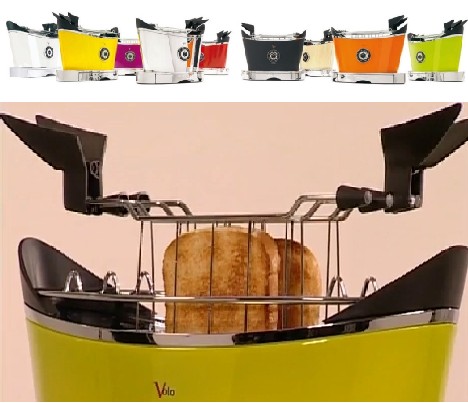 It may not include a built-in stereo system or rich Corinthian leather seating surfaces (hey, some folks LIKE to sit on their toasters) but the Bugatti Volo toaster does offer the user 6 browning control options. We bet you didn’t even know you needed browning control options, let alone 6 of them. At least it doesn’t require premium electricity. Check out this video demonstrating the Bugatti Volo Toaster’s impressive features: 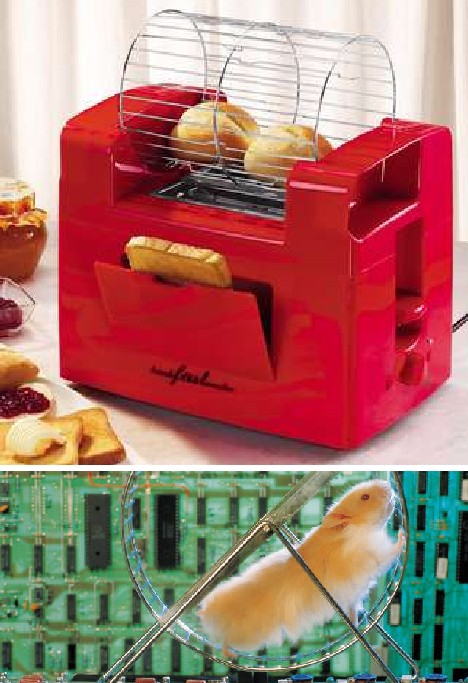 It may look like the star-crossed lovechild of a hamster wheel and a bingo ball popper (or whatever they’re called), but the Patentee Rotary Basket Toaster doesn’t care about that. It’s been designed to toast bread, buns and croissants gently and evenly, and the slowly rotating wire basket on top ensures it does just that. You even get pocket-like warming drawers on the sides to keep your warm toast toasty warm – as toast should be, wot? Just $74 at the usual outlets, hamster not included. 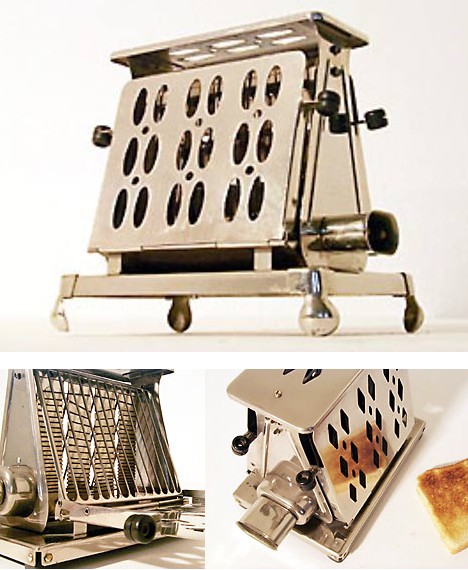 (images via: Focus and Toaster Museum)

Ve haff vays to toast your bread… and the AEG 247 421 vintage toaster is one of them. This classic toaster dates from 1955, a mere decade since the Third Reich was toast, so to speak. Plated in chrome or nickel and boasting black Bakelite plastic trim, these severely functional toasters will toast your bread and… well, that’s about it. Complain if you want – or if you dare – but before you do just imagine the toasters across The Wall in East Germany. Diesel fuel and day-old rye does not a tasty combo make. 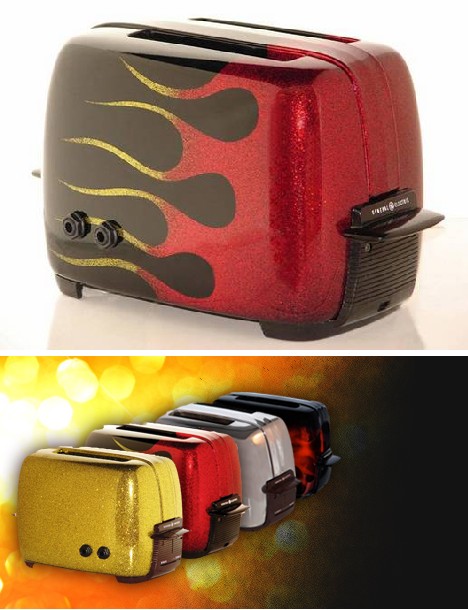 (images via: Geekadelphia and Hottie Guitars)

When is a toaster not a toaster? When it’s a guitar amp, of course! “Hottie” amps are made from genuine, vintage, American toasters – the ones that made this country great. Eviscerated, re-wired and finished in a host of classic guitar-licious colors and patterns, these little amps are just what one needs to warm up an audience until they’re popping out of their seats. Priced from $150 to $250 each, Hottie amps may not toast bread but when it comes to lookin’ good and sounding great, they definitely go to eleven. 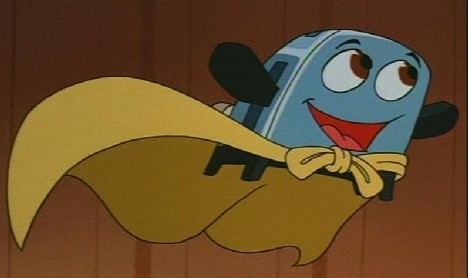 All this talk of toast must surely be making you hungry, so go ahead and singe a slice or two. Before you go, though, have a look & listen to one of the greatest tributes to toast ever recorded: “Toast”, by The Streetband featuring the late Paul Young on lead vocals and butter knife: Scrape that toast, boys!