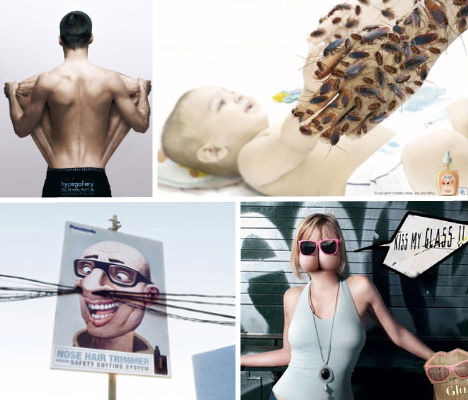 From severed arms to crosses made from marijuana, shocking imagery in ads aims to get our attention – and that they do. Advertisers are using bold and bizarre visuals to draw eyes in an increasingly cluttered world and their attempts range from disgusting gross-out tactics to clever interactive displays. Some of these 15 ads effectively help us remember what might otherwise be an obscure brand, while others fall flat, or worse, make us sick.

Finetra: Where Even Nightmares Come to Rest 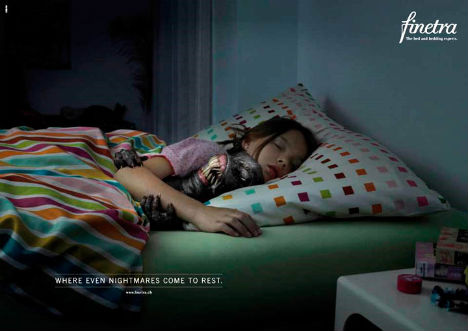 Finetra’s bedding is so comfortable, your razor-toothed evil alien demons will give up on their nightmarish intentions and just curl up with you instead.

You Eat What You Touch 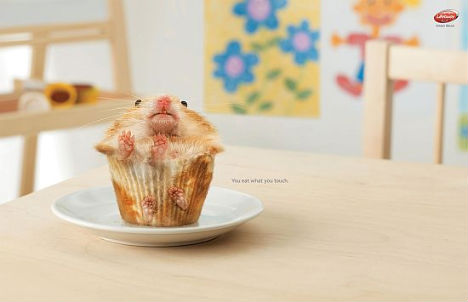 Mmm, hamster muffin! This ad for Unilever’s Lifebuoy antibacterial soap tries a gross-out tactic to make people paranoid about what germs might be lingering on their hands when they eat.

If You Aren’t Totally Clean, You Are Filthy 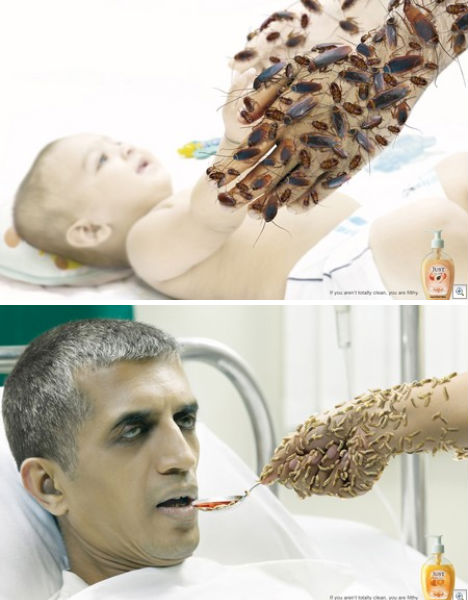 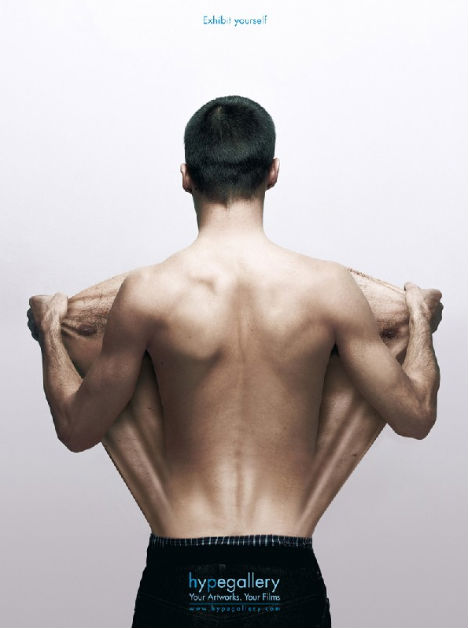 The grotesque image of a man holding open the flayed skin of his chest, showing off his internal organs to the world, is meant to tempt viewers into ‘exhibiting themselves’ at HypeGallery.com, a place where users could show off their artwork and films. 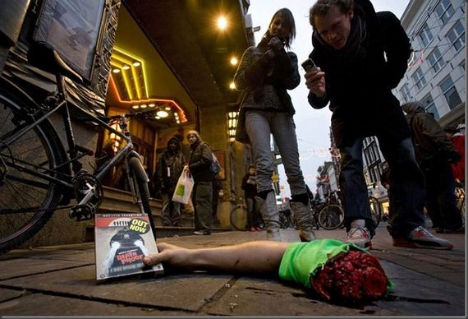 A severed arm on the street would definitely attract some attention, and it was a fitting guerrilla stunt for the DVD release of Quentin Tarantino’s gory 2007 movie, ‘Death Proof’, in Amsterdam. 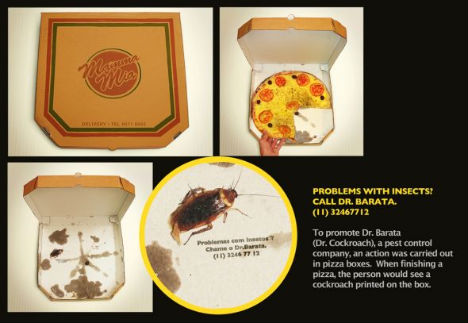 Imagine devouring an entire pizza and then seeing a cockroach in the box. A pest control company calling itself Dr. Barata (Dr. Cockroach) made up these boxes to scare pizza consumers into calling for help… or maybe just calling health inspectors on the pizza joint that thought these boxes were a good idea. 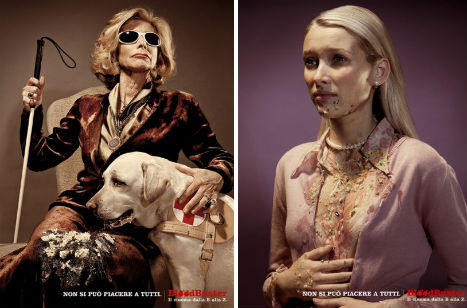 (images via: ads of the world)

Italian B-movie store Bloodbuster brought on the gags with a series of puke-themed posters that say “you can’t please everyone.” Doesn’t it make you want to rent one of their movies?

Get Them Off Your Dog 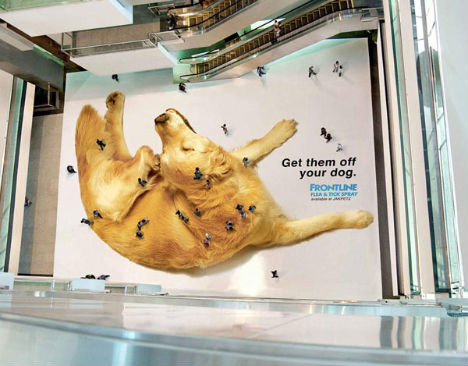 (image via: hooked on ads)

Gross out tactics aren’t the only way to get attention. Clever and interactive, this massive Frontline poster on a mall floor turns people into fleas when viewed from above. 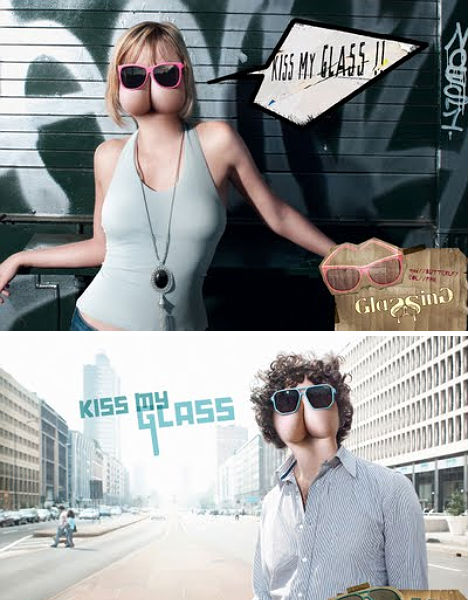 Does this ad campaign imply that wearing Glassino sunglasses makes you look like an ass? 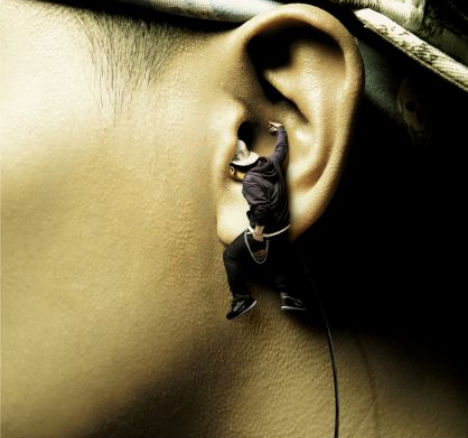 Evidently, this ad for a Samsung MP3 player is telling us that using their product is like having a tiny rapper yelling into your ear. Which is to say, awesome.

We Protect Your Cattle from Almost Everything 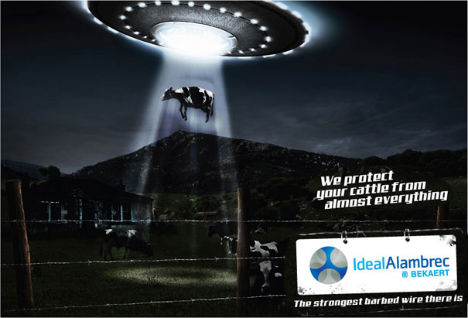 Barbed wire company Ideal Alambrec is up front about their product’s limitations: it’ll protect your cattle from almost everything. But when it come to aliens, there’s simply no guarantees.

Does It Matter How You Achieve Your Spiritual High? 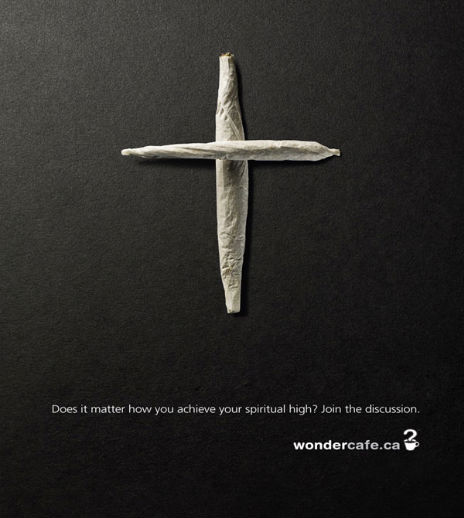 Wonder Cafe, a forum for spiritual discussion, courted controversy with this startling ad featuring two joints formed into a cross. Whether the ad is interesting or crass may depend upon your own religious views, but it definitely attracted some attention.

Those Are Some Dangerous Nose Hairs 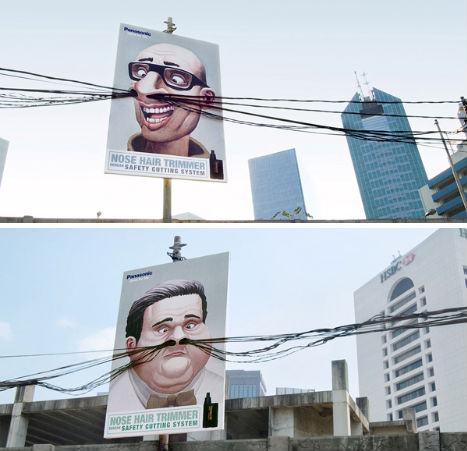 In what seems to be a bit of a safety hazard, Panasonic twisted power lines through the nostrils on a series of billboards in Indonesia to push nose hair clippers.

Come As You Are (Darth Vader) 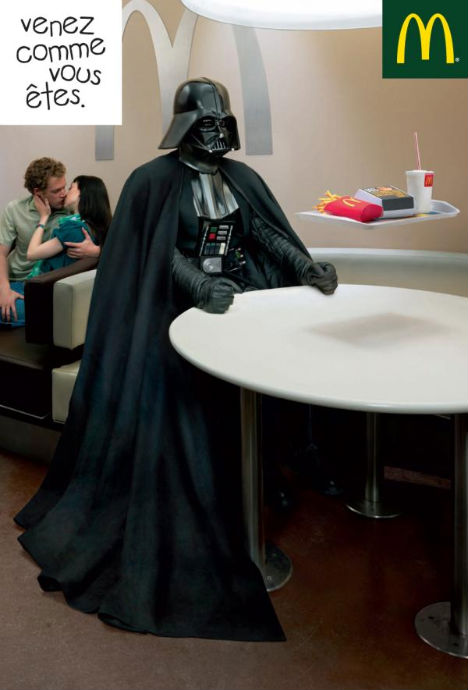 McDonalds told the world to ‘come as you are’ in a long print ad campaign that featured some unexpected characters – like Darth Vader here, who somehow doesn’t seem too happy with his meal.

Don’t Talk While He Drives 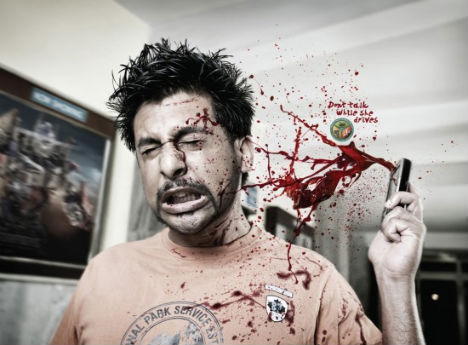 This Bangalore public safety ad, aiming to prevent cell phone-related accidents, tells us that if you keep someone on the phone while they’re trying to drive, you could end up with blood on your hands… and on your face… not to mention splattered all over your clothing and bedding. Careful, that stuff stains.