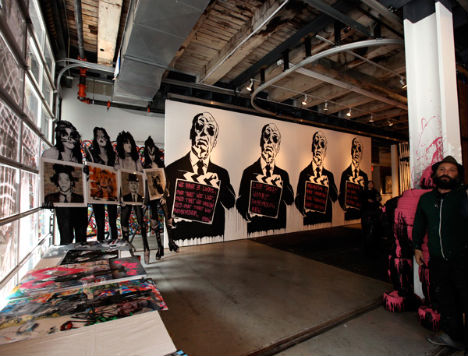 “Is Banksy’s Mr. Brainwash the Borat of the art world?” asked NYMag.com in April after the latter made his debut at Sundance as subject of Banksy’s film, Exit Through the Gift Shop. That question was likely on the minds of many at Art Basel in Miami recently as overflowing crowds jostled to see his work. If this shamelessly derivative street artist was conceived on Banksy’s part purely as a statement about the commercialization of the art world, it appears that most people aren’t in on the joke. Mr. Brainwash’s works are now outselling Banksy’s own. 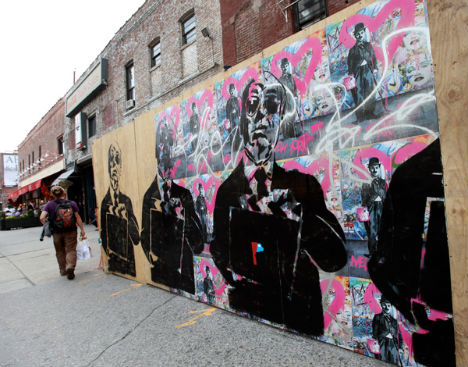 (all images via: notcot)

Mr. Brainwash – a.k.a. Thierry Guetta, a French citizen living in Los Angeles and apparent cousin of famed Parisian street artist Space Invader – first exhibited his work in L.A. in 2008. This show, promoted on the cover of L.A. Weekly and attended by over 7,000 people on its opening night, was filmed for Banksy’s ‘documentary’. Mr. Brainwash went on to design the cover art for Madonna’s album ‘Celebration’ in 2009 and has sold several works for over $100,000 including a Jim Morrison portrait made of broken LPs. 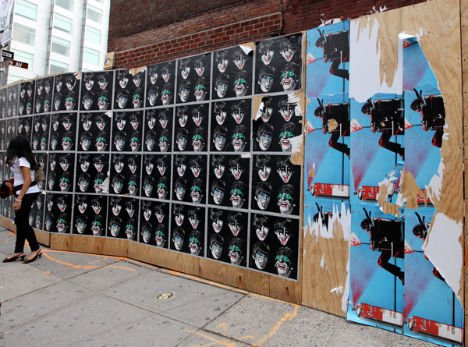 In the film, directed by Banksy, Mr. Brainwash is never shown actually creating his work and openly admits that the process is mostly “scanning and photoshopping” done by hired assistants. The work itself, strongly reminiscent of both Banksy’s work and that of fellow street artist Shepard Fairey – who is featured in the film giving lukewarm praise to Mr. Brainwash – is also heavily influenced by Andy Warhol and packed with slightly altered pop-art imagery. 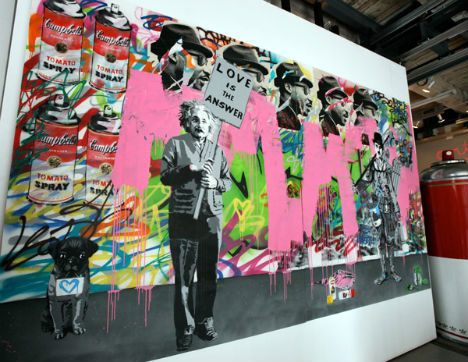 It might seem that the title of the film itself is a blatant reference to the profit-oriented, assembly-line nature of modern art and that the name ‘Mr. Brainwash’ hints unsubtly at how Banksy correctly assumed Guetta would be received by the world at large. It’s also easy to laugh at a gullible public that is so easily herded into sharing popular opinions. But could Banksy still be pulling one over on us all – skeptics included? Some question whether the adoring crowds in the documentary were even real, or whether the work could be that of Banksy himself. 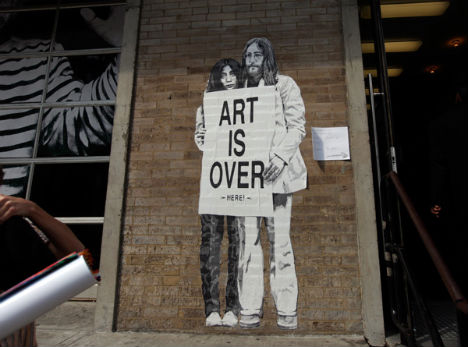 Either way, Banksy has seen prices of his own work eclipsed by those of his creation. “His art sells for roughly double what mine does these days,” he told L.A. Weekly. “Gore Vidal once wrote that ‘Every time a friend of mine succeeds, a little bit of me dies.’ I’d amend that to ‘Every time one of my friends borrows my ideas, mounts a huge art show and becomes a millionaire celebrity,’ a little bit of me wants him dead.”