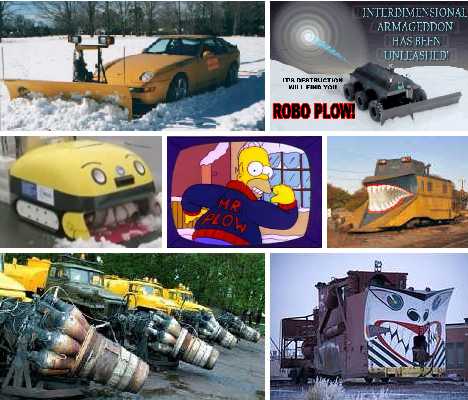 When snow begins to pile up, snow plows head out to take it down. These glorified power shovels are a triumph of basic technology against the forces of nature, and even then there’s room for adaptation, customization and decoration. So clear the way for these 10 cool cutting edge snow plows… or better yet, let THEM do it for you! 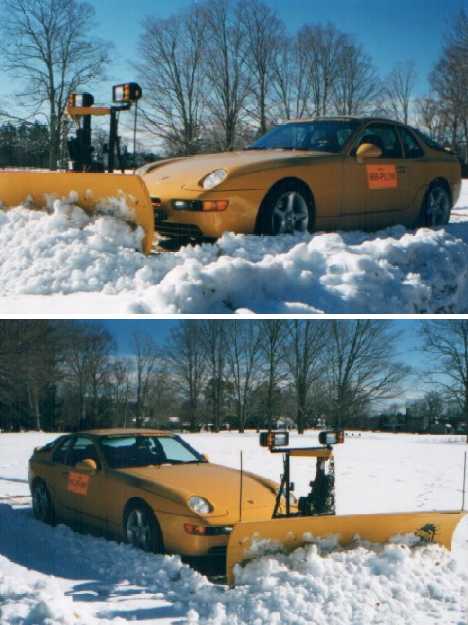 Ever wonder what the snow plow driver drives? No, it’s not a shop… but the Porsche 968 Snowplow isn’t exactly what it appears to be, either. “In honor of April Fools Day, each April I write my column about something humorous,” explains Bruce Corwin, owner of the 968 above. “One year I took the snowplow off a friend’s truck and parked my 968 behind the plow. I took a few photos that looked like the plow was attached to the front of the Porsche and wrote a column about the Porsche ‘snowplow option’.” 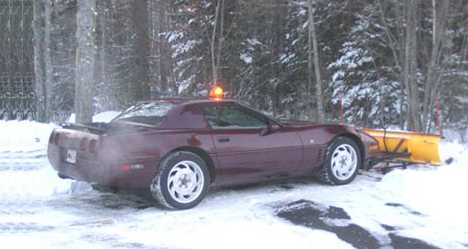 We’re guessing the Corvette Snow Plow above was “constructed” along the same lines, though the flashing orange light on the roof is a nice touch. 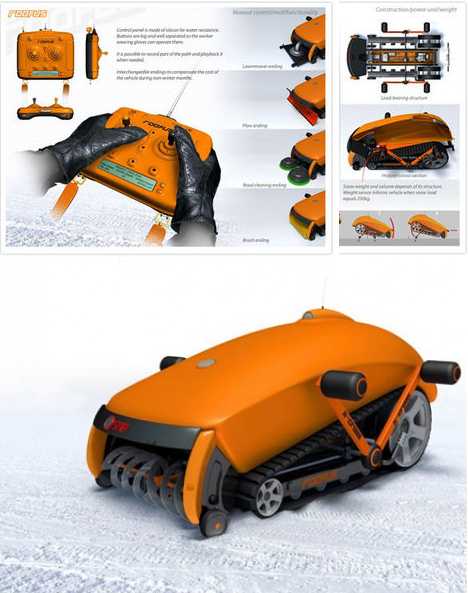 (images via: ConceptPop and Gizmodo)

Meet Roofus, the Radio-Controlled Robotic Snow Plow who’s gonna tell ya somethin’ good: plowing your driveway just got as easy as playing a video game! Shiny orange Roofus was originally designed to clear snow from roofs – hence the name – but snow is snow and Roofus just eats it up. Roofus rides on twin caterpillar tracks and packs two electric motors plus a gasoline engine – it’s Mr. Freeze’s Prius! Bolt on some peripheral attachments and Roofus can mow your lawn, sweep the drive and more… actually, YOU can, by just flexing your thumbs. 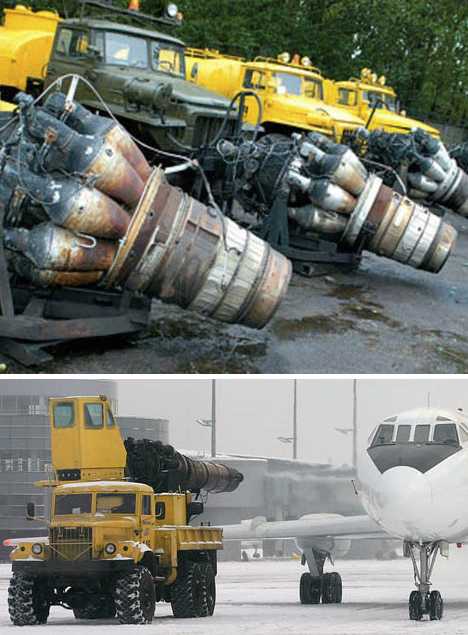 When General Winter gets all ornery-like and threatens to put the kibosh on your holiday travel plans, who ya gonna call? Snow Busters!… now equipped with Klimov VK-1 jet engines upcycled from Red Army surplus MiG-15 fighter planes. These bizarre jet trucks are used in Russia and the former Eastern Bloc to clear snow off airport runways and, on occasion, de-ice airliners. If you thought flying Aeroflot sucked, guess what? It blows, too. 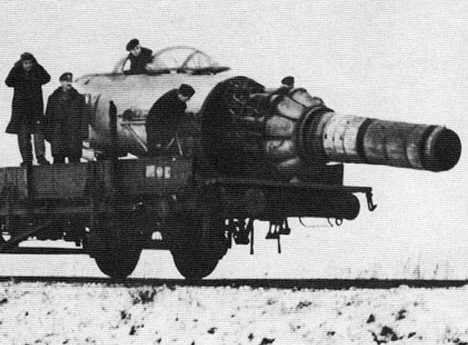 Train tracks also get the blow-dry treatment in eastern Europe, as the makeshift snowblower above illustrates. Now that’s one loco locomotive! 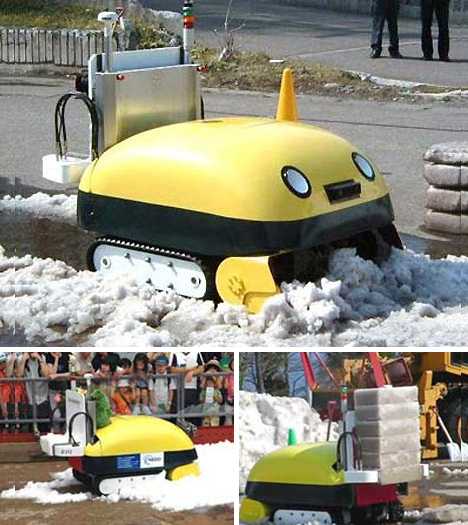 (images via: Pink Tentacle and Geekologie)

Anyone for some Japanese over-engineering with a dash of cute overload? Arigato, snowplow roboto! The cute (of course) creation above is Yuki-Taro, an environmentally-friendly snow plowing robot that seeks out snow with two video cameras (one in each “eye”) and an on-board GPS receiver. 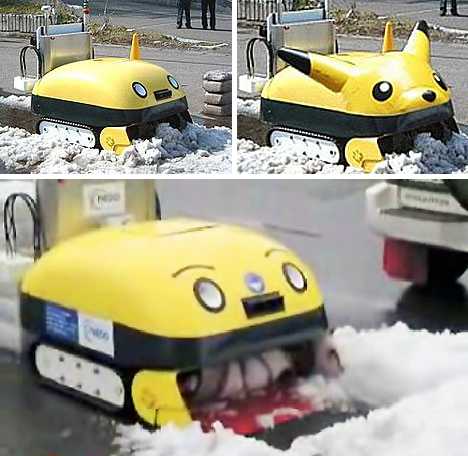 (images via: Ubergizmo and Techeblog)

Yuki-Taro was designed to help elderly homeowners clear their driveways and walkways. As for what to do with the cleared snow, 880 lb Yuki-Taro simply eats it – whereupon internal compactors form the snow into uniform bricks which are then excreted out the back. If a coalition of several Japanese universities and research institutions didn’t design Yuki-Taro, we’d have to guess a bunch of Japanese kids did. Toss in the eyebrows and the Pikachu mod and we’re sure of it. 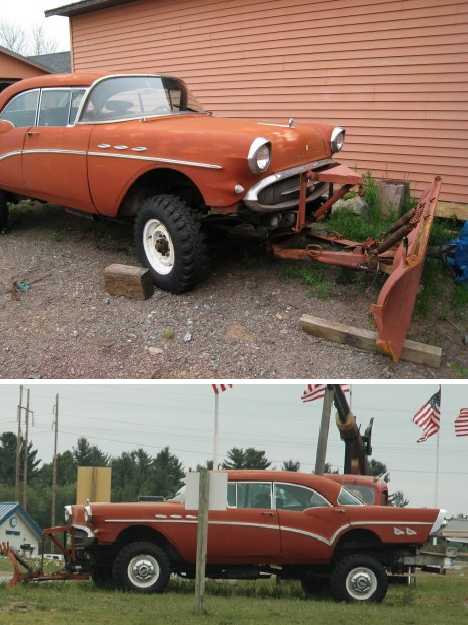 (images via: Travelpod/Hildreth75 and Perimeter Run)

They say time goes by slower up in Michigan’s Upper Peninsula, and the winters, well, they seem to last forever. That still doesn’t explain this four door, four wheel drive, 1955 Buick snow plow. We can’t explain it either, so simply gaze upon it in awe and wonder. 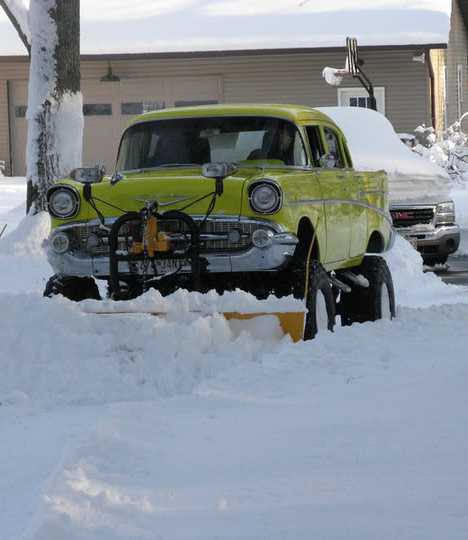 One of the most iconic cars of the finned, fabulous Fifties was the 1957 Chevy, ideally as a fuel-injected 2-door Bel Air convertible. The snow plow sedan version… not so much. Even so, you’d have to be Mr. Plow to be any cooler than the driver of this tricked out, chrome-bedazzled rig. 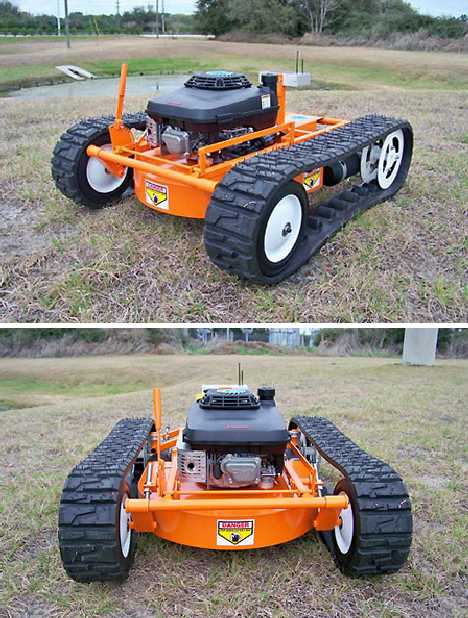 “Hybrid Goat Robot” sounds like the title of a very bad B-movie we’d nevertheless love to see, but the Hybrid GOAT ROBOT 22T from Eva Tech is actually a tank-like treaded vehicle that maintains your yard and drive season in and season out. 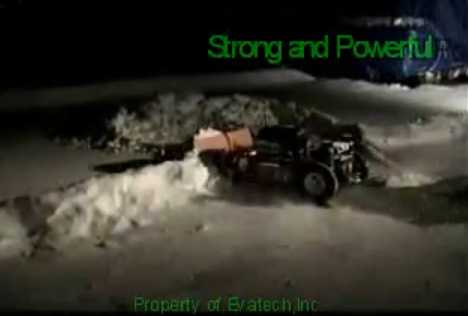 You’ll need to put out $11,999 for the pleasure, mind you, but that’s probably cheaper than keeping your own living goat – and they don’t plow snow all that well. 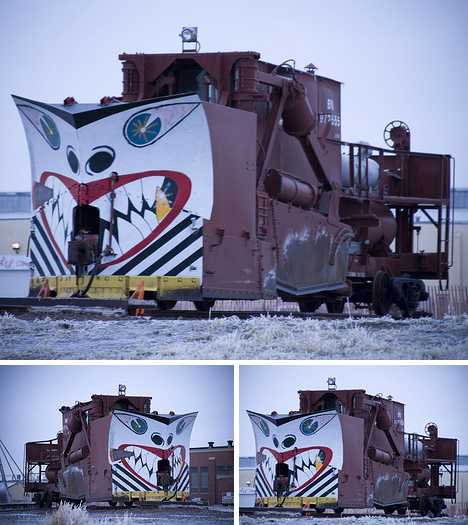 Train snowplows are all kinds of awesome from the get go and there’s really no need to jazz ’em up – so when that happens, it’s off the rails awesome… so to speak. Take the Evil Clown artwork on the train snowplow above… Hell’s Snow Plow indeed! 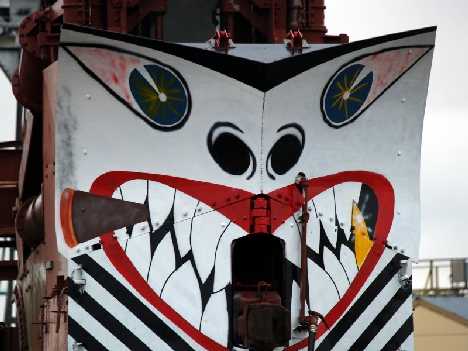 When this Bozo on expired steroids comes roaring down the track somewhere in the wilds of rural Montana, be afraid, be VERY afraid, be Stand By Me afraid! Oh and we love the single gold tooth, nice touch there. 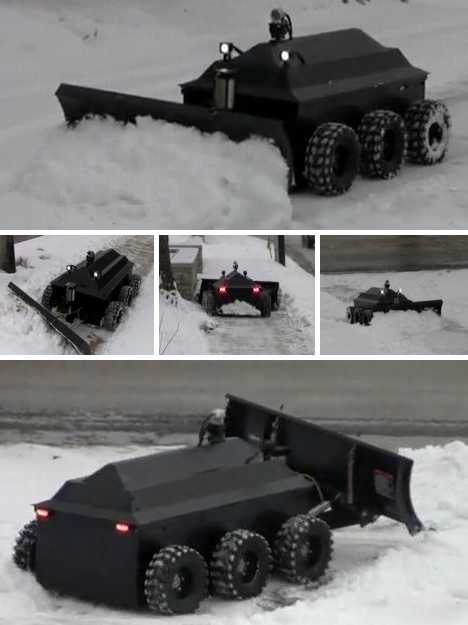 When Robocop wants to plow his driveway, you’d better believe he’s not plowing it – he’s a robotic cop, right? Besides, odds are he’s got RoboPlow: the leanest, meanest, robotic snowplow there is. Don’t be surprised if if rolls up – on 6 wheels, no less – and booms out “Clarence Boddicker, I’m here to shovel your driveway!” 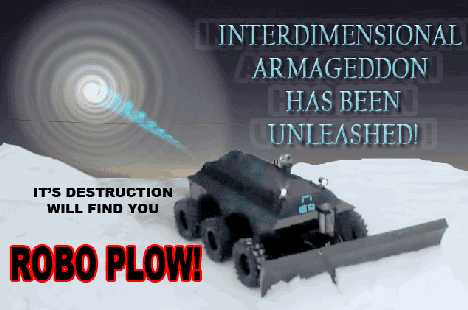 RoboPlow sports a wicked 50” wide angle-able blade and packs 660 amps of power. It features a pair of 10-watt LEDs for night-plowing (not the same as night-putting), a pair of flashing red LED brake lights and a fully articulated camera on top to freak people out – if looking like a runaway dwarf casket wasn’t enough. When the cam turns your way, you half-expect a Martian heat ray to blast forth! Available in any color you want – as long as its black. 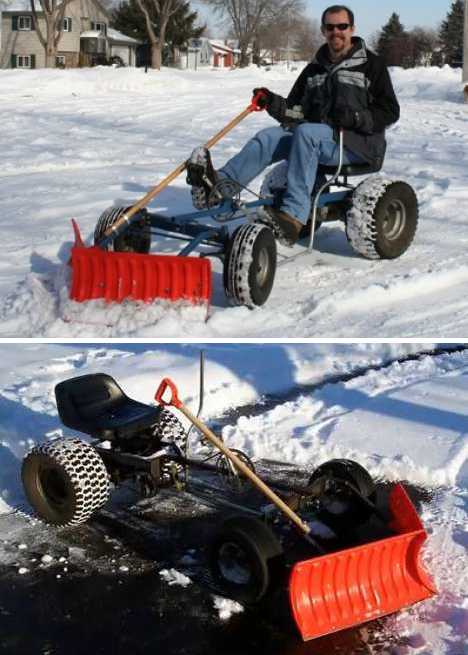 From the wild to the mild – we give you the pedal-powered snow plow. No motors, no LEDs, no GPS or frikkin’ laser beams and yet, it’s still awesome… AND fun! It might not be mean but it sure is green. “It probably took me 50 to 80 hours to complete the pedal plow,” says crafty DIY-er Kevin Blake. “With a little bit of mechanical aptitude, some metal working resources and a couple of old bikes, just about anyone can make a pedal-powered snowplow.” 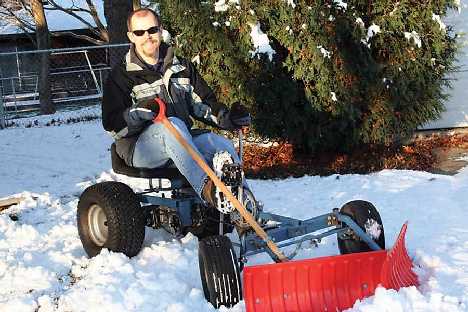 Thanks to Kevin’s exhaustively complete directions, just about anyone CAN build themselves a pedal-powered snow plow. We’re not sure what Kevin’s regular job is, but with ideas like these he should tell his boss to “take this job and shovel it!” 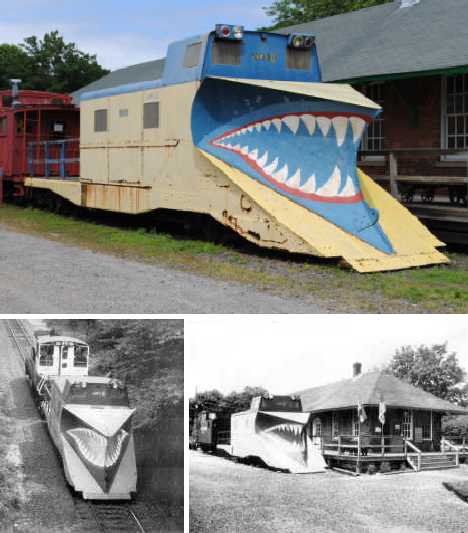 (images via: RMLI and TrainWeb)

Looking like a cross between the boss Blue Meanie from Yellow Submarine and a Curtiss P-40 Warhawk in Flying Tigers livery, snowplow W83 “Jaws III” was probably the most exciting thing to ever ride the rails of the Long Island Rail Road. Built by the LIRR machine shop atop a 1907 flatcar way back in December of 1915, W83 cleared snow along the main line for decades before being rebuilt and repainted in November of 1978. 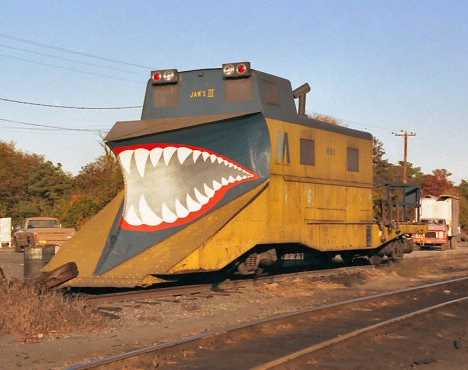 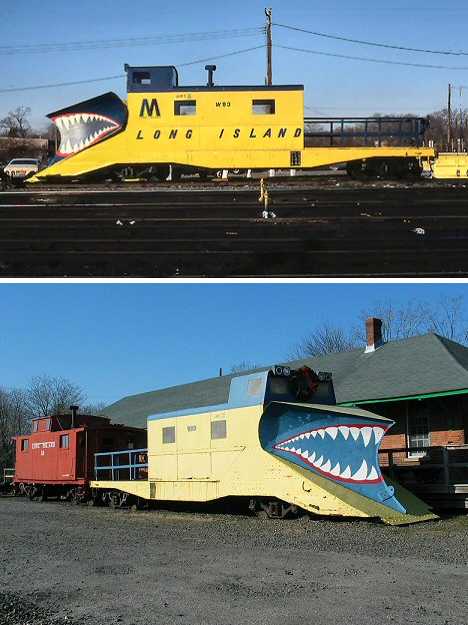 After a further 8 years of faithful service, the LIRR finally retired snowplow Jaws III (or perhaps by then, “Dentures III”) in 1986. The larger than life, toothy rolling shovel was handed over to the Railroad Museum of Long Island and remains parked just outside the Greenport Freight House. 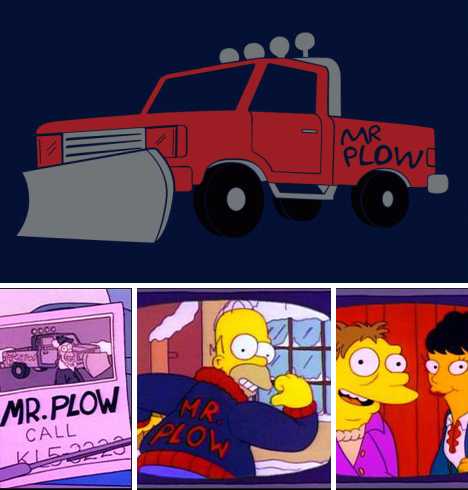 (images via: Busted Tees and Culturish)

“Call Mr. Plow, that’s my name, that name again, is Mr. Plow!” Ahh yes, Mr. Plow cruised into pop culture consciousness on November 19, 1992, on the ninth episode of The Simpsons’ fourth season. There it has remained, stuck like a snow plow buried beneath an avalanche on Widow’s Peak. Just consider, though, if “Plow King” Barney had been driving any of the above 10 snow plows he’d never need to be rescued and consequences (and Springfield history) would never be the same.