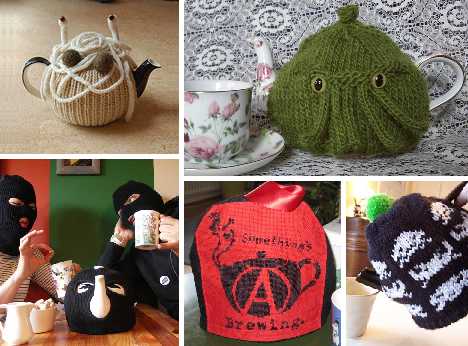 When it comes to home, hearth and tradition, does it get any more British than Tea Cozies? These quintessential snuggies for teapots typically display peaceful, pastoral themes and styles but even tea cozies have their radical fringe. These 10 extreme tea cozies show what can happen when natty knitters think outside the bag. 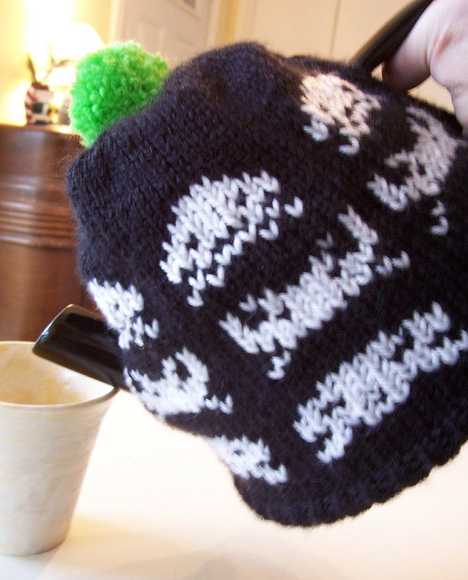 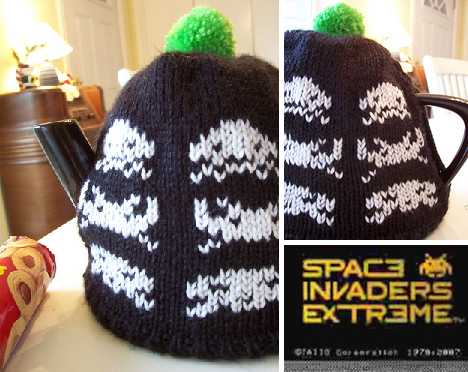 The tea cozy (or tea cosy, to use the UK spelling) first appeared in mid-nineteenth century Great Britain along with the tradition of Afternoon Tea. Space Invaders, introduced in 1978, was one of the first breakthrough video arcade games and its 8-bit alien invaders often symbolize pop culture in the digital age. 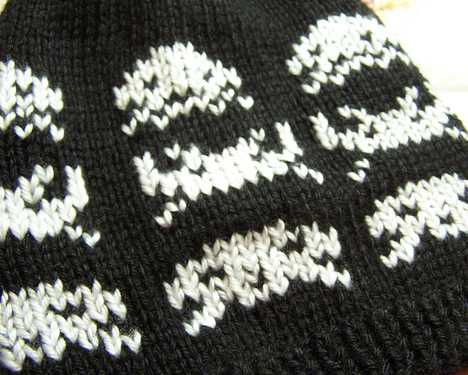 So, what do Victorian-era Afternoon Tea and an iconic early video game have in common? Not much, really… except for this aggressively analog tea cozy designed by Olivia Regester. Featuring white aliens against a black field, Regester adds a dash of color via the lime green “pom”. 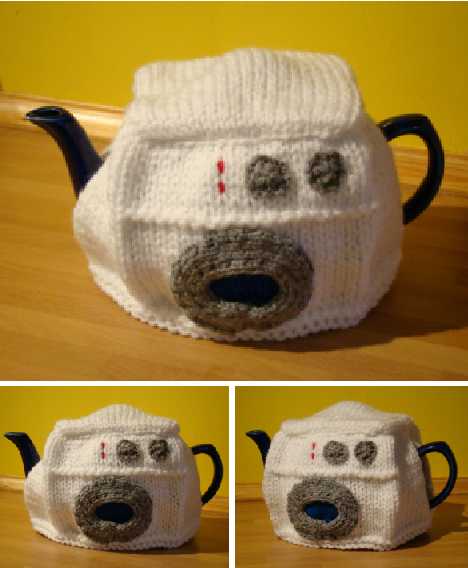 Tea cozies designed to emulate English country houses are relatively common; those knitted to look like home appliances, not so much. Regardless, someone somewhere will deeply appreciate a tea cozy that looks like a washing machine – especially, as this instructive article states, if said person happens to work at a laundrette. Yep, I’m sure after a long day surrounding by the sights, sounds and shapes of washers & dryers, there’s nothing like relaxing with a hot cuppa from your washing machine tea cozy covered teapot. 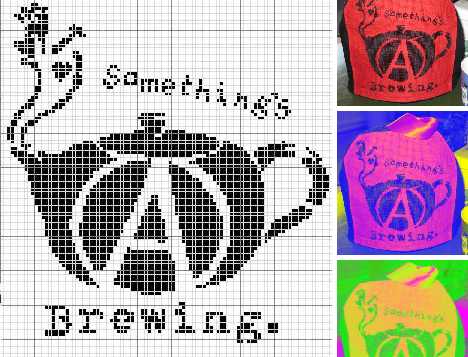 If the Anarchist Cookbook’s in your library, odds are the Anarchist Tea Cozy’s on your sideboard… brewing up trouble along with some delightfully warming Earl Grey. Rayna Fahey, editor of Radicalcrossstitch.com, Johanna of crossyrstitches.blogspot.com found the source image at Radical Graphics and turned it into a sewing pattern. 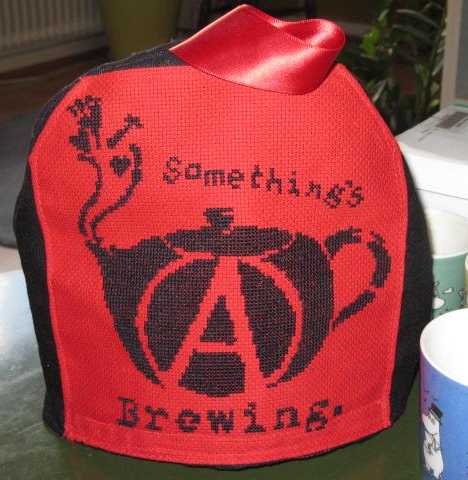 “Except it’s awesome cuteness,” comments Johanna, “I also like the notion of that something is brewing – that underneath the surface we can create our own little pockets of resistance and counter culture and that one day, it might boil over into the rest of society.” 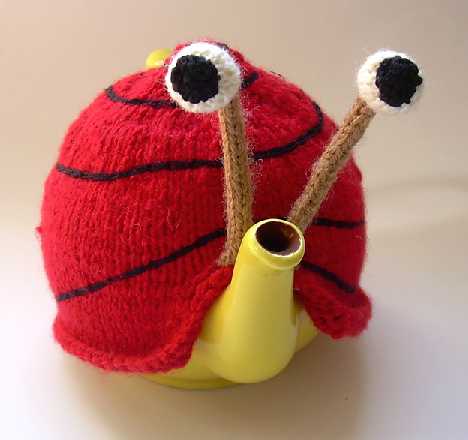 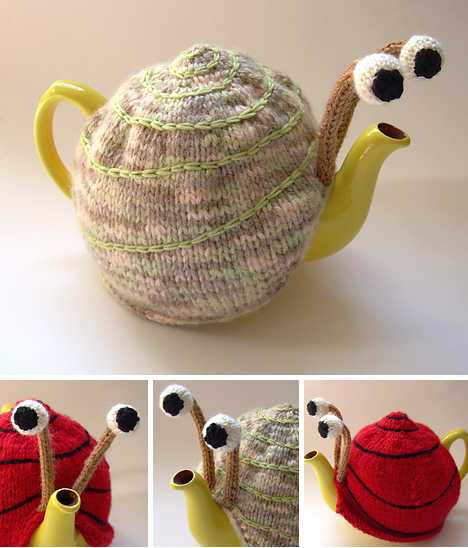 (images via: S For Snail and Ravelry)

The Snail Tea Cozy is a cute, whimsical pattern designed by Anke Klempner of Anke’s Nutty Knits. The use of pipe cleaners for the stalked eyes is a thoughtful touch, dontcha think? Just imagine sipping your favorite black tea on a grey, drizzly English afternoon with your Snail Tea Cozy keeping the pot warm – and its eyes on you. 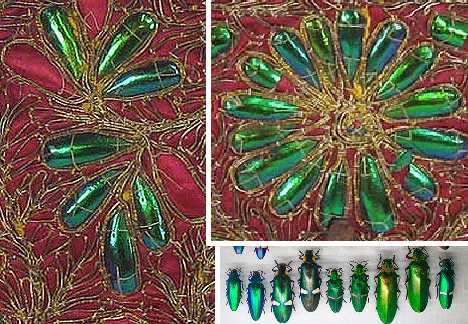 (images via: Hantsweb and Charles Tilford)

Most tea consumed in Great Britain in the 1800s came from India, then a British possession. As such, it makes perfect sense for the brilliantly jeweled tea cozy above to conserve the warmth of an English teapot, since the tea cozy was made by craftsmen in India. Erm, it’s not actually jeweled per se… the metallic green ovoids are the outer wings of Jewel Beetles. 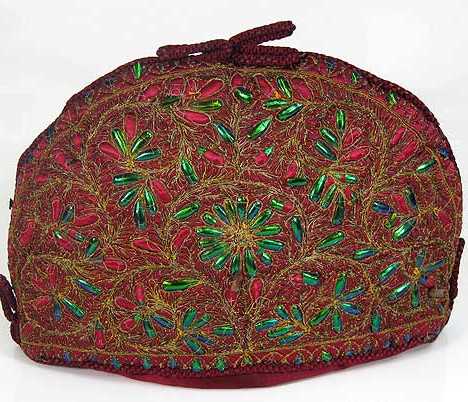 The iridescent green beetle wings were sewn onto a backing of rich red silk satin. Gilt-wrapped thread is used copiously to complement the reflective beetle wings. The tea cozy above dates from roughly 1867 to 1890 and is in remarkable condition. 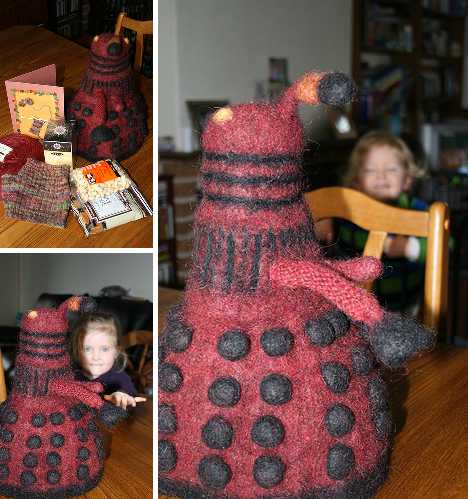 (images via: Ramblings Of A Yarn Junkie)

“Ex-Tea-Minate!!” Sorry, couldn’t resist. Fans of the long-running British sci-fi series Doctor Who will certainly recognize the above tea cozy as being modeled after a Dalek: cyborgs from the planet Skaro whose overriding mission is to eliminate all vestiges of non-Dalek life. As Daleks exist within tank-like mechanical canisters, their basic shape lends itself to that paragon of warmth and un-hatefulness, the tea cozy. 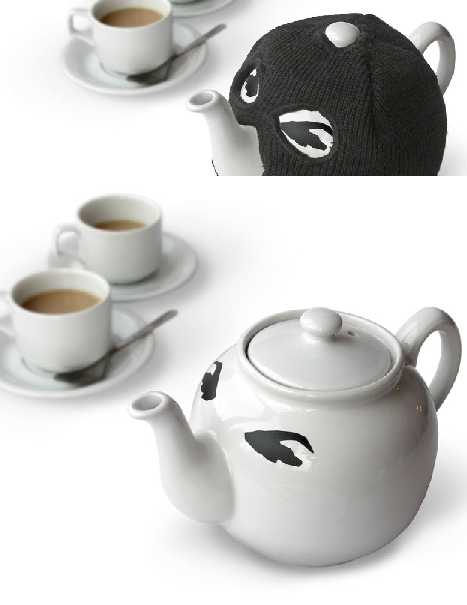 (images via: Suck UK and The Green Head)

According to Suck UK, the manufacturer of the Terrorist Teapot & Tea Cozy, “Some tea cosies are just evil.” Indeed, the BBC reported that 37 people were injured in tea cozy related accidents in 1999 – at this rate, the malicious mufflers shall be banned! Check out the video report by a newsreader who finds the whole issue somewhat amusing (starts at 1:53): 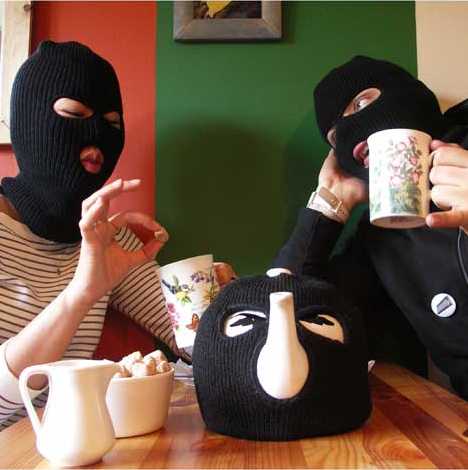 The Terrorist Teapot & Tea Cozy is a rare instance of extreme tea cozies going mass market. The set – and one part really doesn’t work without the other – consists of a teapot marked with facial features that conveniently show through corresponding holes in the balaclava tea cozy. There’s also a hole at the top center of the cozy so that the teapot lid’s knob can poke through. Rather accommodating for a terrorist, I must say! 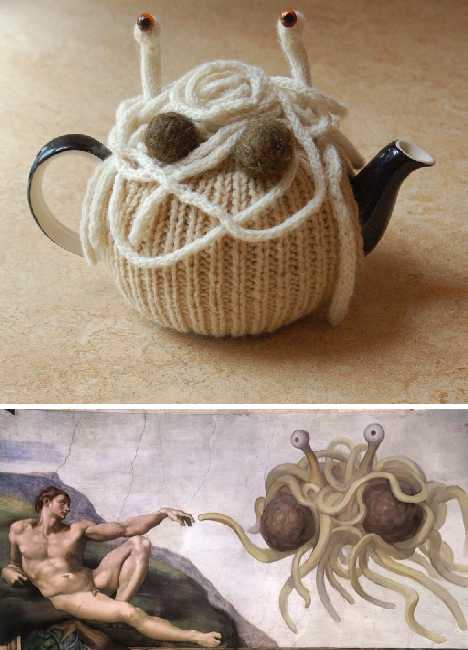 (images via: Elin and Wikipedia)

Pastafarians, unite! Fans and devotees of the Flying Spaghetti Monster, your tea cozy is here – thanks to the creative efforts of one natty knitter who seasons her tea with theism. While outwardly resembling the cute Snail Tea Cozy mentioned earlier, the FSM Tea Cozy makes a statement against proponents of Creationism and Intelligent Design while gently insulating one’s tea against the chill winds of religious intolerance.

The Tea Cosy of Awesome 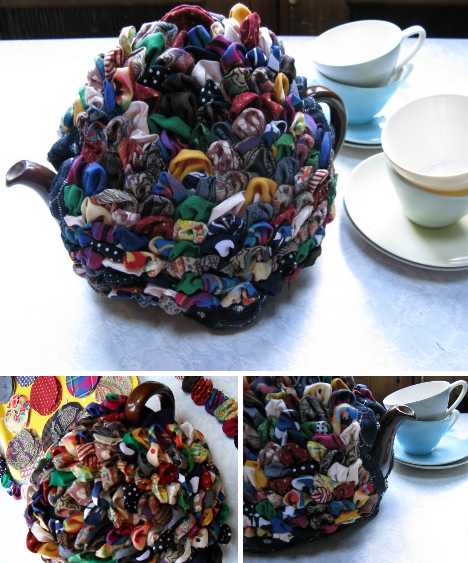 (images via: On A Sunday Crafternoon)

“The tea cosy of awesome?” Really? I shan’t be snooty, however, because the crafts-person who designed the colorful confabulation of fabrics and textiles expended many hours of labor to create it – and that’s pretty awesome in itself. Designed as a gift to a loving parent, the Tea Cosy of Awesome is lined and edged as any proper tea cozy should, and employs a number of fabric scraps with a material (pun unintended) connection to the crafter’s life. The result? “Mum was freaking stoked.” 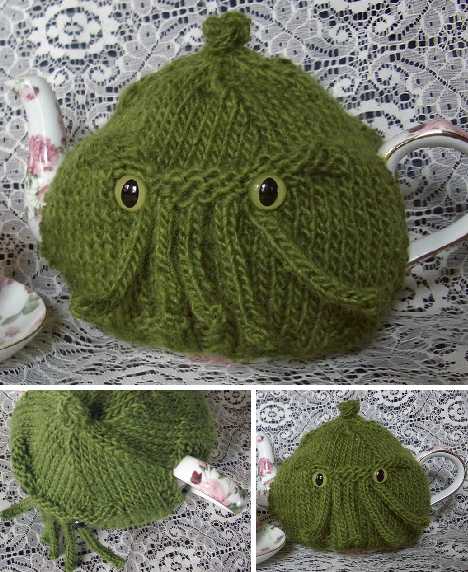 Cthulhu waits, dreaming… of this lovely tea cozy! Well, maybe not, but if you’ve got enough chaos in your life and need to kick back like a Great Old One, the Cthulhu Tea Cozy is for you. Crafted with love (love crafted?) from green Andean Wool, this cool cozy would make a great gift for – dare I say it – your Elder Ones. 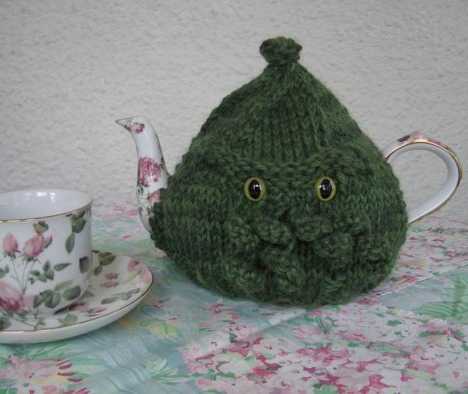 You can buy your own Cthulhu Tea Cozy if crafting one is beyond your abilities and you have the option of having it shipped or picking it up at the seller’s location in R’lyeh… er, I mean Minneapolis.