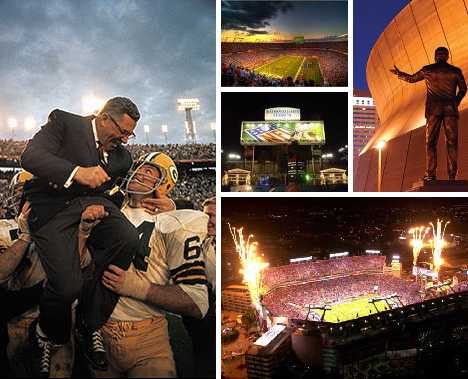 It takes a special kind of stadium to host a Super Bowl; to host more than one you’ve gotta be, well, super-special. These 10 legendary sports stadiums have acted as the emotional epicenter of the NFL universe multiple times, giving them a unique claim to football fame that lingers long after the final whistle blows. The very first Super Bowl – known at the time as the first AFL-NFL World Championship Game – took place at the Los Angeles Memorial Coliseum on January 15, 1967 and, surprisingly, was far from a sellout. Only 61,946 fans were in attendance when the NFL champion Green Bay Packers triumphed over the AFL’s Kansas City Chiefs by a score of 35-10 – maybe the $12 tickets (as opposed to $6) were deemed too pricey. 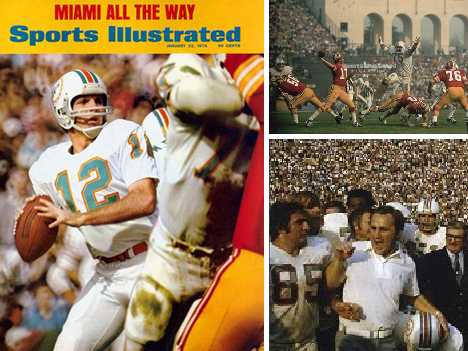 (images via: SI/CNN, Mitchell and Ness and Dolphins Football Deals)

Following the AFL-NFL merger in 1970, “The Big Game” morphed from a novelty to the ultimate football world championship game: on January 14, 1973, a near-capacity crowd of 90,182 watched the AFC’s Miami Dolphins defeat the NFC’s Washington Redskins 14-7 in Super Bowl VII and in doing so, put the finishing touch on the only undefeated season in NFL history. First opened on May 1, 1923, the Los Angeles Memorial Coliseum boasts a capacity of 93,607 for football games. The addition of seats made possible by the installation of a smaller baseball diamond, however, led to a MLB record 115,300 people attending a 2008 baseball exhibition game between the Los Angeles Dodgers and Boston Red Sox. Super Bowl XVIII was held at Tampa Stadium in January of 1984, with the Los Angeles Raiders crushing the Washington Redskins 38-9. Seven years later in January of 1991, Super Bowl XXV featured the New York Giants defeating the Buffalo Bills by a score of 20-19; the only time (to date) the Super Bowl was decided by a single point. 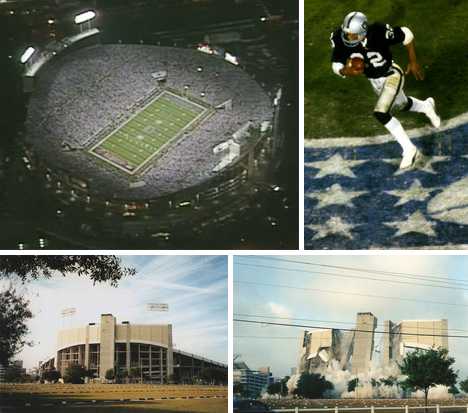 (images via: Freewebs and Ookaboo)

Opened on November 4, 1967 and demolished in the spring of 1999, Tampa Stadium enjoyed the nickname “The Big Sombrero” and served as the home base for Tampa Bay Buccaneers games from 1976 through 1997. One notable aspect of Tampa Stadium was its highly crowned field surface, designed to provide quick water drainage during and after a typical, tropical, Florida thunderstorm. Though not obvious from grandstand seating, the center of the field was 18 inches (45 cm) higher than the sidelines. 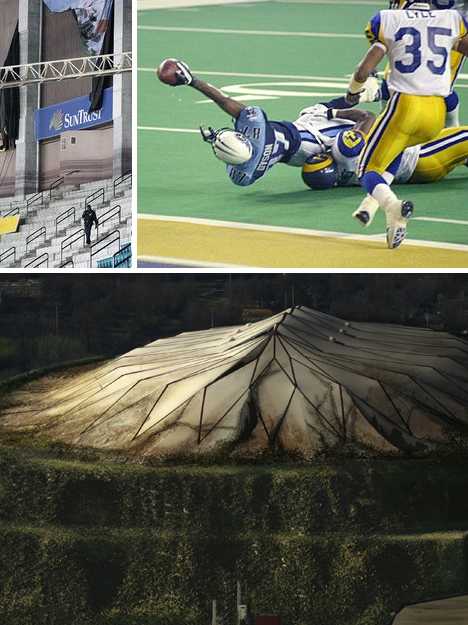 (images via: ESPN, J_Visser8 and History.com)

The Georgia Dome in Atlanta, GA, hosted Super Bowl XXVIII (Dallas Cowboys 30 – Buffalo Bills 13) in 1994 and Super Bowl XXXIV (St. Louis Rams 23 – Tennessee Titans 16) in 2000. Since 2003, the playing surface at the Georgia Dome has been composed of state-of-the-art FieldTurf, which replaced the original AstroTurf and is said to be the artificial turf closest in look and feel to natural grass. Speaking of vegetation, the TV series Life After People conjured up an intimidating image of the Georgia Dome overcome by everyone’s favorite green menace, kudzu. 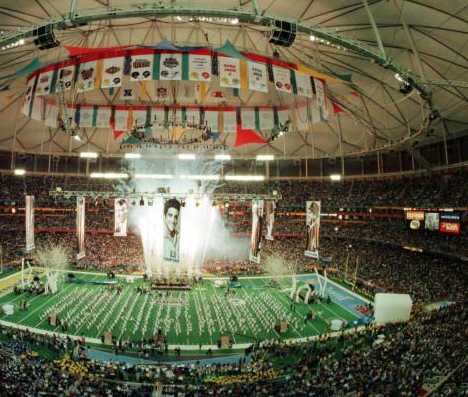 The Georgia Dome is a state-owned sports facility that opened in September of 1992. Its 270.67 ft (82.50 m) tall, teflon-coated, fiberglass fabric dome covers the largest indoor sporting facility in the United States. The Georgia Dome’s domed roof has been damaged by weather on two occasions: once during a severe thunderstorm in 1995 and again on March 14, 2008 during the 2008 Atlanta tornado outbreak. (images via: Zimbio, FrontDoor and PostersGuide) 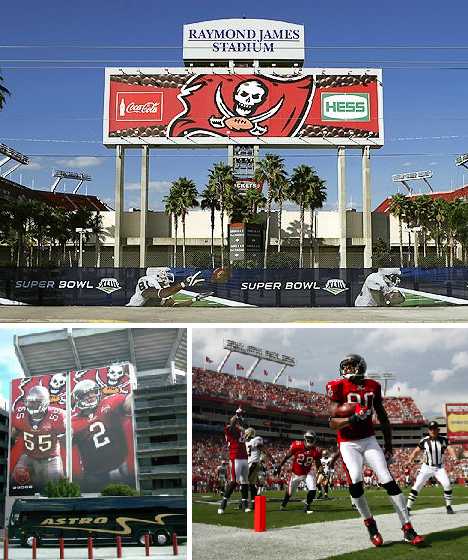 Raymond James Stadium is very much the Tampa Buccaneers’ home field: anyone confused about that need only look over at the built-in, 103-ft (31 m) long, 43–ton, steel & concrete replica pirate ship that fires rubber footballs into the crowd whenever the Bucs score. The pirate ship also was the site of press and media reporting during Super Bowls XXXV and XLIII 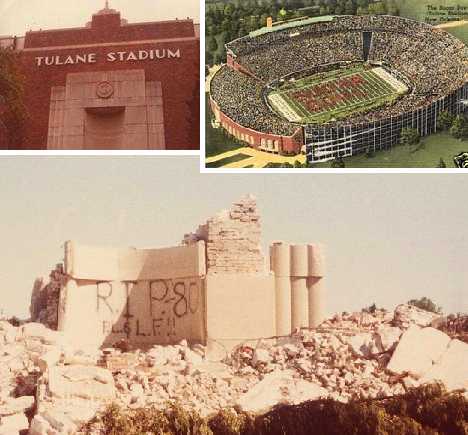 (images via: Black Grads Davis, Down In The Parish and Skyscraper City) 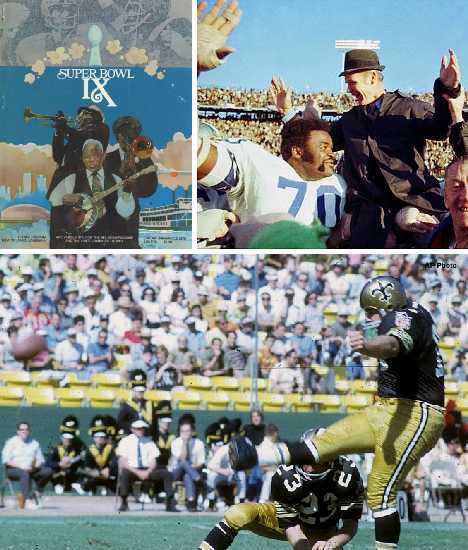 Tulane Stadium was the home field of the NFL’s New Orleans Saints from 1967 through 1974. The inaugural Saints game on September 17, 1967 got off to a rousing start when New Orleans WR and kick returner John Gilliam ran back the opening kickoff 94 yards for a touchdown. Tulane Stadium was also the site of Saints’ placekicker Tom Dempsey’s 63-yard field goal on November 8, 1970. Dempsey’s distance record stood for 28 years… 18 years longer than Tulane Stadium. 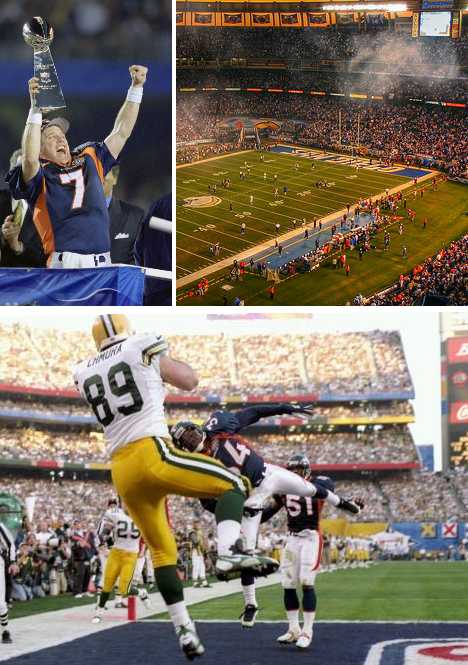 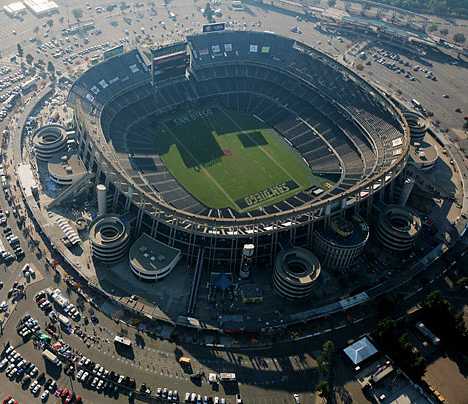 Qualcomm Stadium is not in the running to host a 4th Super Bowl, though not by choice. It seems the NFL would prefer to hold their penultimate game in a more modern, media-friendly facility and this stance follows the league’s recent practice of only awarding Super Bowl games to cities that have “new” stadiums. 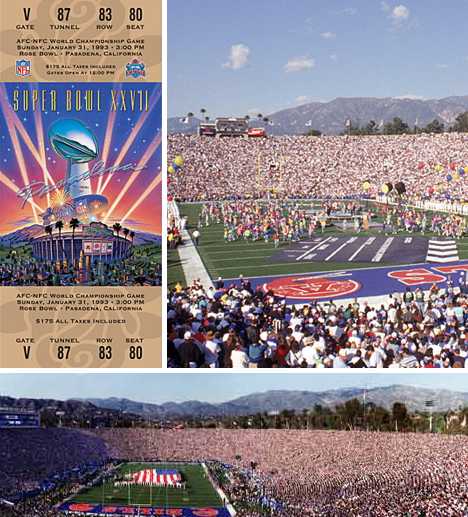 (images via: Businessweek and L A Payne)

The historic Rose Bowl in Pasadena, California, was built at a cost of just $272,198 and hosted the first Rose Bowl game on January 1, 1923. The stadium has hosted a total of 5 Super Bowls between 1977 and 1993 inclusive, but due to the NFL’s post-1993 policy of only awarding Super Bowls to so-called “NFL cities”, it may not be played there again. Not that the Super Bowl isn’t a popular draw at the Rose Bowl, attendance exceeded 100,000 for 4 of 5 games. The 98,374 at Super Bowl XXVII on January 31, 1993, watched O.J. Simpson perform the pre-game coin toss, after which the Dallas Cowboys pulverized the Buffalo Bills 52-17. 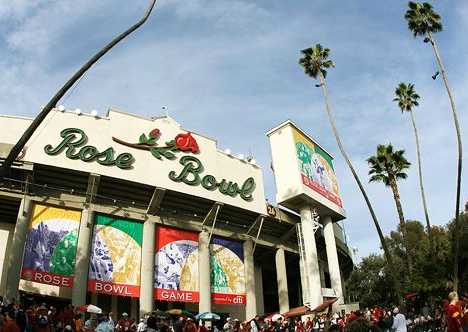 Super Bowls XI, XIV, XVII, XXI, and XXVII were played at the Rose Bowl but after 1993, nada. Will the Rose Bowl ever host another Super Bowl? You never can tell – the Los Angeles market easily supported two NFL teams from 1982 through 1994. The fun ended in 1995, however, when both the Raiders and Rams left for Oakland and St. Louis, respectively. Since then, nothing’s been coming up roses as far as the Super Bowl in Pasadena is concerned. 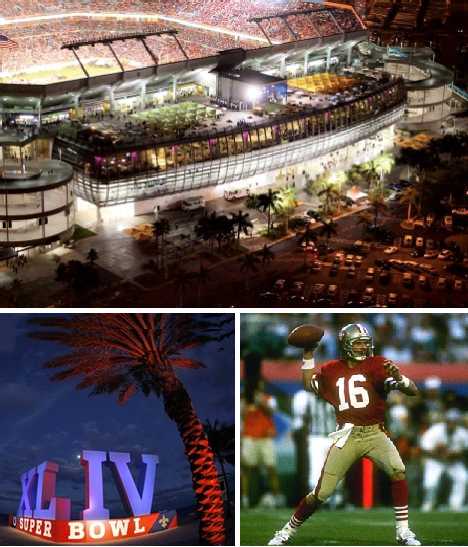 (images via: Southern Gaming, Read Between The Lines and Businessweek)

Sun Life Stadium in Miami, Florida, has hosted the Super Bowl 5 times (1989, 1995, 1999, 2007, and 2010) – which matches the number of names this stadium has had if one includes the short-lived Land Shark Stadium in 2009. Some unlikely Super Bowl trivia for ya? Consider this: In every Super Bowl played at this stadium (except Super Bowl XLIV in 2010), a kickoff has been returned for a touchdown. 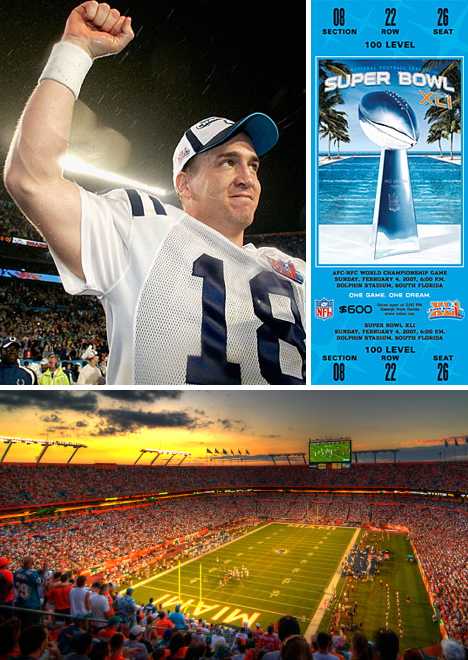 (images via: Businessweek and Miamism)

Though it may seem to be a popular Super Bowl venue, the NFL has some concerns about the viability of Sun Life Stadium, mainly concerning the weather. An open-roofed stadium in south Florida exposes fans to blistering sunlight and heat on clear days and drenching rain when the clouds close in. The issue may be a non-starter, however, since the NFL has announced that Super Bowl XLVIII will be held at open-air New Meadowlands Stadium in East Rutherford, New Jersey in February of 2014. 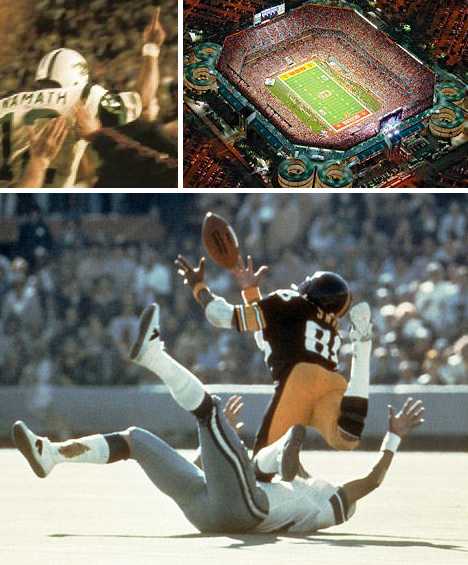 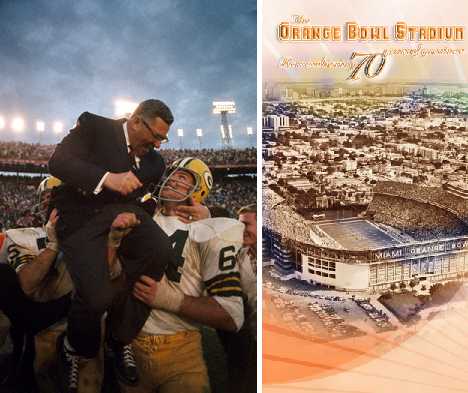 The Orange Bowl was famed for its deafening crowd noise, a factor that undoubtedly boosted the fortunes of 1970s Miami Dolphins teams that rattled off a record 31-game home winning streak from 1971 through 1975. College teams loved the Orange Bowl as well: between 1985 and 1994, the Miami Hurricanes won an astounding 58 straight home games! 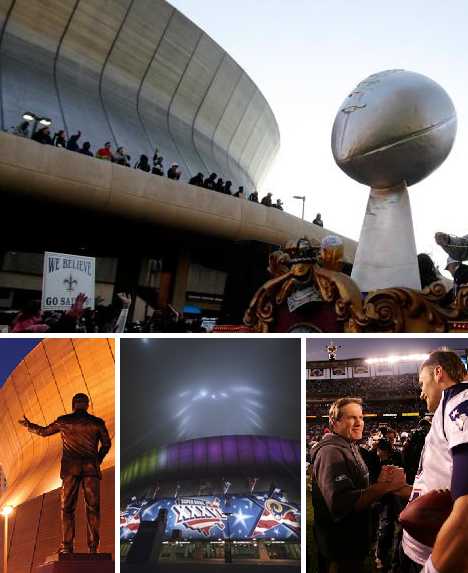 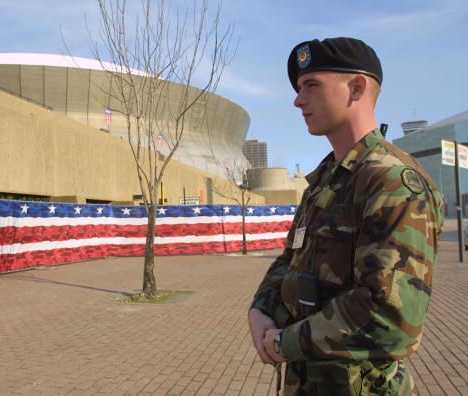 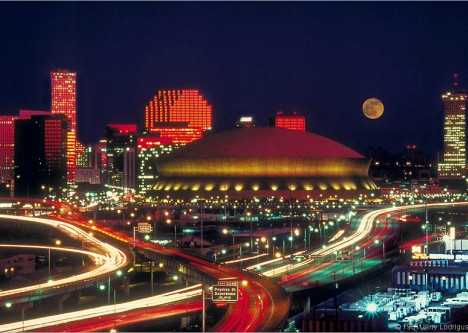 (images via: LIFE and DaScoop)

If leading the pack when it comes to hosting the most Super Bowls isn’t enough, the New Orleans Superdome will extend its lead even further when it hosts Super Bowl XLVII in 2013. What’s more, that lead looks to be safe for the foreseeable future: the other three announced Super Bowls to date will be played at “virgin” stadiums in Arlington TX (2011), Indianapolis IN (2012), and East Rutherford NJ (2014). Now ain’t that a kick?