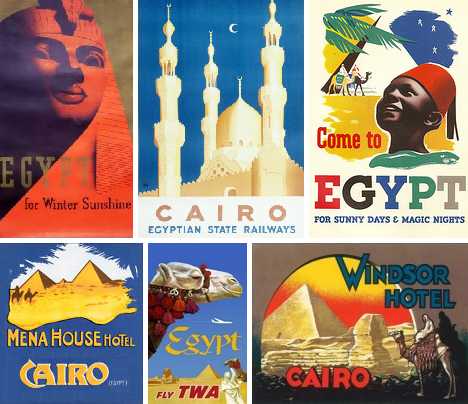 Egypt has been showing the world its real face lately, courtesy of live TV news and social media sites like Twitter and Facebook. Scenes of passionate protests at daily demonstrations stand in stark contrast to the idyllic imagery used to tempt tourists and vacationers. This Luxor-ious selection of vintage Egypt travel posters sheds a nostalgic light on the travel industry’s biggest pyramid scheme. 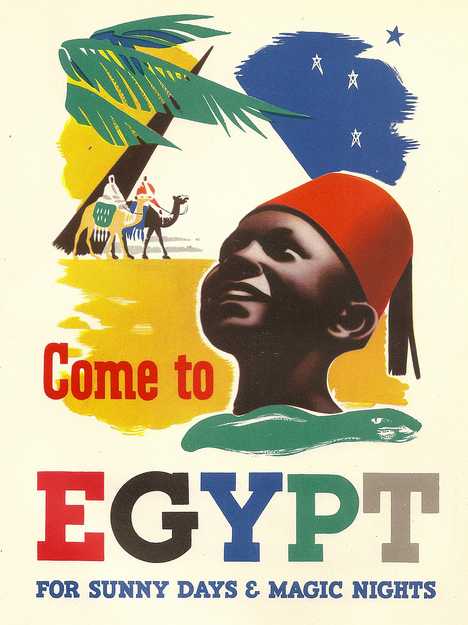 In Egypt, it would seem, the weather’s always sunny and nights, well, they’re magic… whatever that means. Then again, this poster was designed in 1937 when just getting to Egypt safe and sound took a little magic and a lot of luck – and not a carpet, which is about the only thing this stereotypical scene lacks. 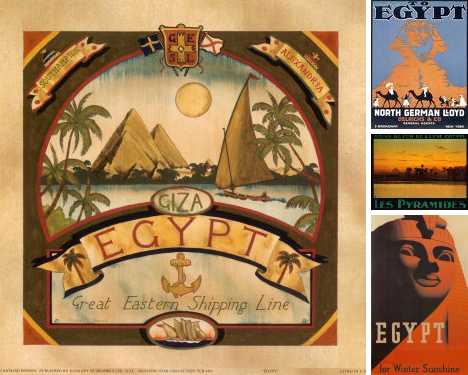 (images via: Art.com and Allposters)

Long before it was a Madness song, the night boat to Cairo was the best way to reach the land of the Pharaohs. Shipping companies of the day did their best to make curious travelers aware of their services, typically through lovely watercolor-look posters that made up in style what they lacked in real detail. 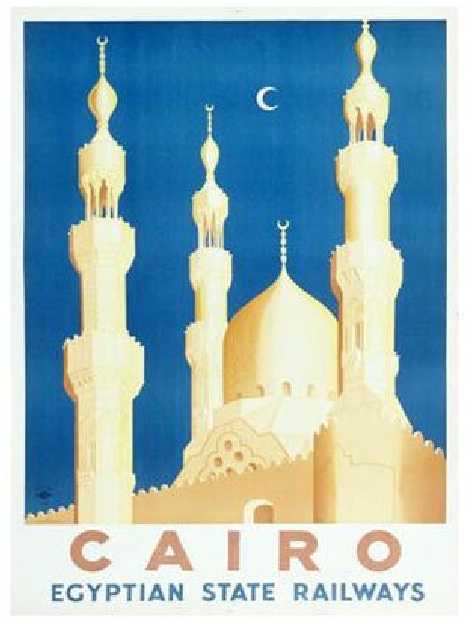 Lets’ not forget the railways, the Egyptian State variety in particular. The first railroad in Africa and in the Middle East, running between Alexandria and Cairo, was completed in 1856.

Twilight Of The Gods 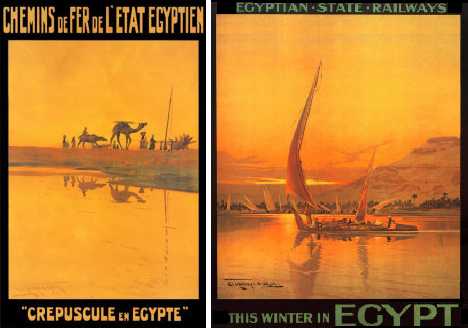 In the first decade of the 20th century the French artist M.Tamplough produced a number of exquisitely mysterious travel posters in that, unlike most of their contemporaries, allow the observer to provide the emotional impetus to travel to Egypt. “Crepuscule En Egypte”, or “Twilight In Egypt”, from 1911, is a triumph of soft lighting, muted color and subtle visual cues.

Crossing the endless dunes of the Western Desert on your trusty camel is all well and good, but you’ve got to get to Egypt first – and the best way to do it is by air. 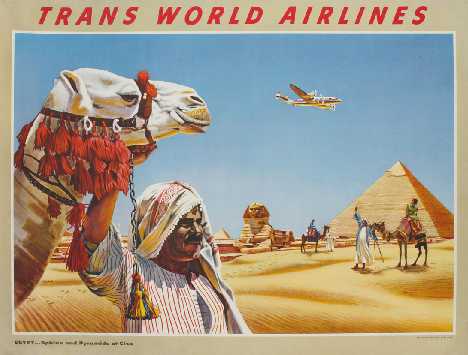 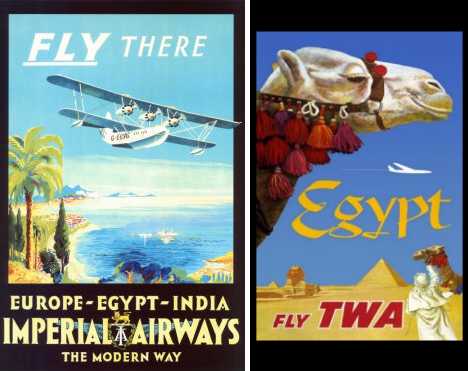 This selection of travel posters manages to incorporate Egypt’s best known ground attractions with airplane motifs in various degrees of stylization. Note that TWA’s ad agency got twice their money’s worth by using the same camel in two different posters. 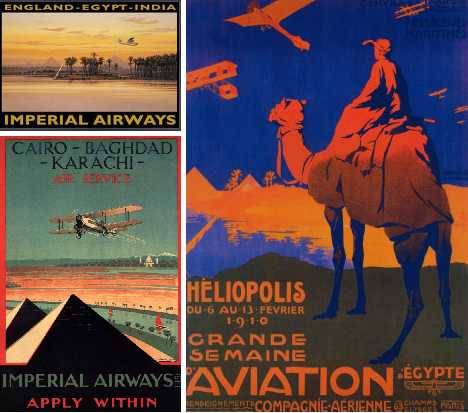 Planes were slower and smaller in the years before jets revolutionized the airline industry, factors that made Imperial Airways’ Cairo-Baghdad-Karachi jaunt an adventure in itself. 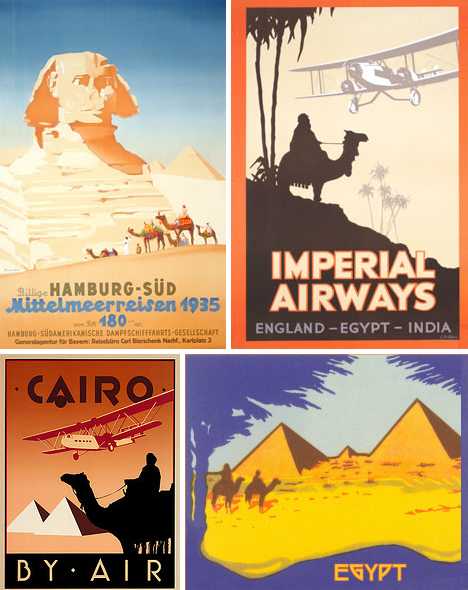 (images via: Kodak Agfa and Allposters)

Flickr user Kodak Agfa has assembled a stunning selection of vintage Egypt ads including the four pre-WW2 travel posters above. The German ad at above top left dates from 1935, putting one in mind of the 1989 film Indiana Jones and the Last Crusade. 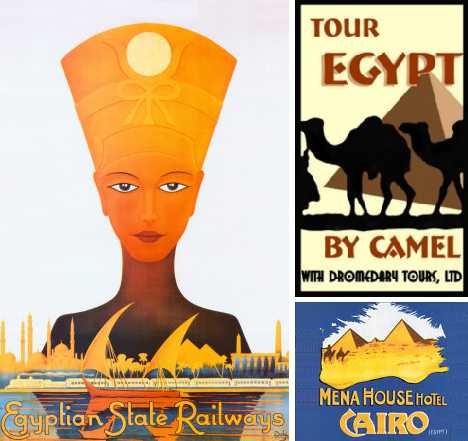 This mesmerizing Egyptian State Railway ad from 1925 effectively transmits the exotic beauty of Egypt, mother of all nations. The almond-eyed temptress in the poster exudes a silent seductive siren song that undoubtedly lured more than one lonely amateur Egyptologist to make the trip of his lifetime. 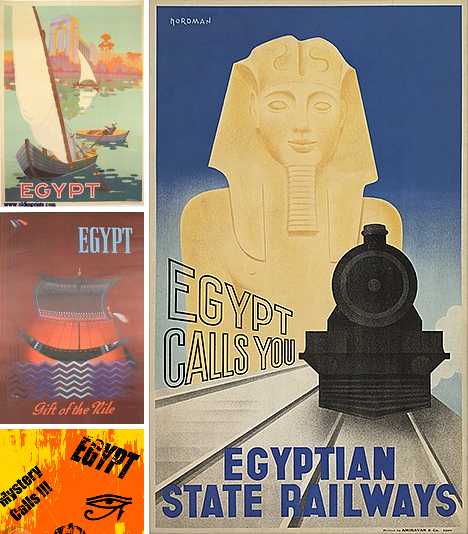 (images via: Artfact and Biblio)

The above ad from 1930 epitomizes Art Deco style in all its glory. A benevolently smiling ancient pharaoh, a massive modern locomotive and radiating, sunburst-like rails to evoke distance and force perspective. 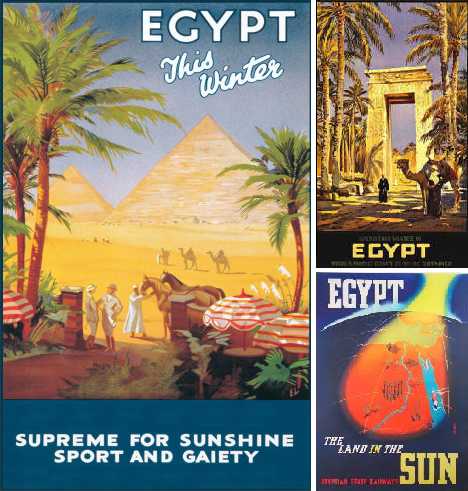 “Egypt this winter; supreme for sunshine, sport and gaiety”… not that there’s anything wrong with that. I’m talking about selling Egypt’s famous sunshine, of course. In the relatively peaceful period between the First and Second World Wars, Egypt was basking in its reputation as an exotic vacation destination filled with ancient splendor and towering ruins. For pasty-skinned northern Europeans, Egypt was appealing on a number of levels. 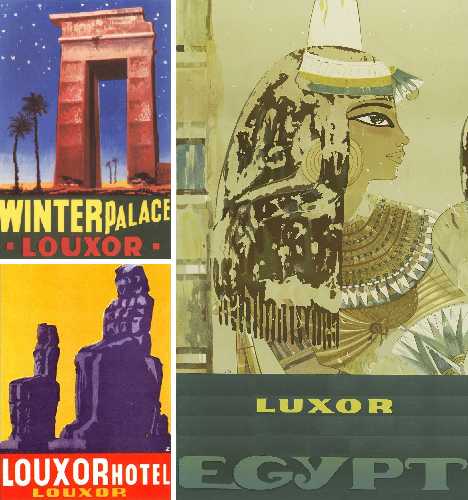 Famed as the “world’s greatest open air museum”, modern Luxor sits on the site of the ancient Egyptian city of Thebes and boasts two magnificent temple complexes: Luxor and Karnak. Across the Nile tourists have easy access to the West Bank Necropolis and the Valley of the Kings. These amazing attractions have been drawing visitors for centuries, and travel agencies have done their part to spread the city’s allure as a prime Egyptian travel destination. 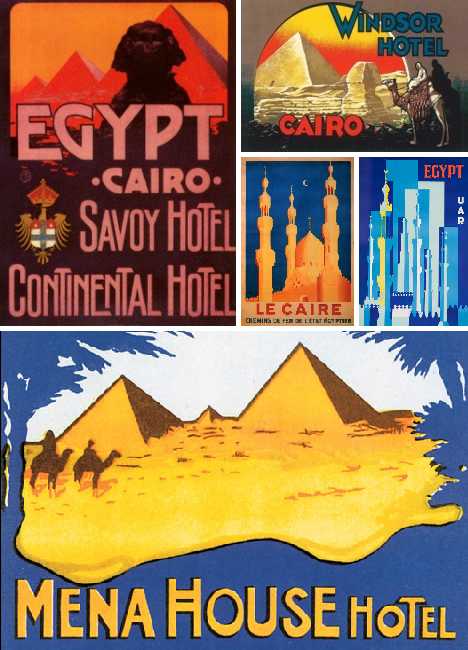 (images via: Zazzle, Bakati and Amazon.com)

Travel agencies often help tourists plan entire itineraries from start to finish, including hotel stays while abroad. As such, hotels are often the subject of travel posters and typically follow the same styling conventions… even for, er, conventions. 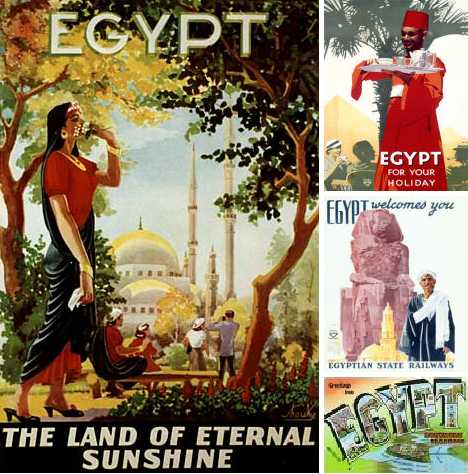 Egypt’s beauty is not limited to her majestic monuments – just ask Caesar, a guy who couldn’t control his Roman eyes (and likely more) when presented with Queen Cleopatra. The poster at above left dates from the 1950s, after King Farouk was sent into royal exile. It seems an appropriate way to end this retrospective look at Egyptian travel posters, as Egypt’s most recent long-time ruler has decided it would be best to do some traveling of his own.