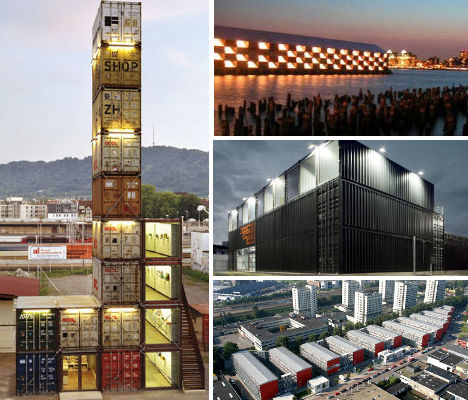 Homes, apartments, offices, emergency shelters – cargo containers are a quick, low-cost, environmentally friendly building block for all of these architectural purposes and more, including massive urban projects that can involve stacking the crates nine stories in the air or grouping thousands into sprawling temporary markets. These 13 shipping container buildings show just how useful these durable, modular, pre-fabricated crates can be. 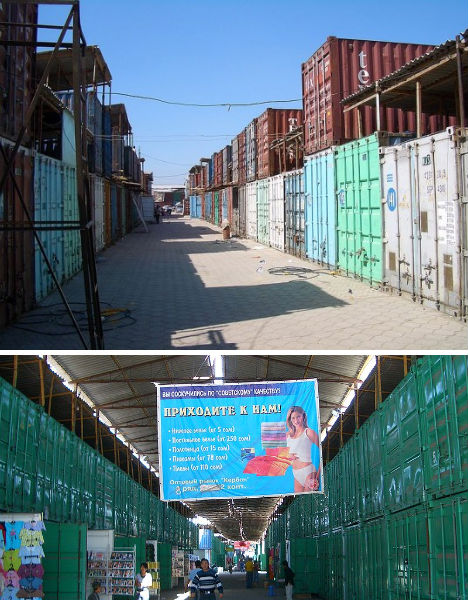 Over 7,000 double-stacked shipping containers make up the kilometer-long Dordoy Bazaar in Kyrgyzstan, one of Asia’s biggest marketplaces. Employing more than 20,000 people, the Dordoy Bazaar is packed with practically all imaginable goods and its architecture is almost 100% reclaimed 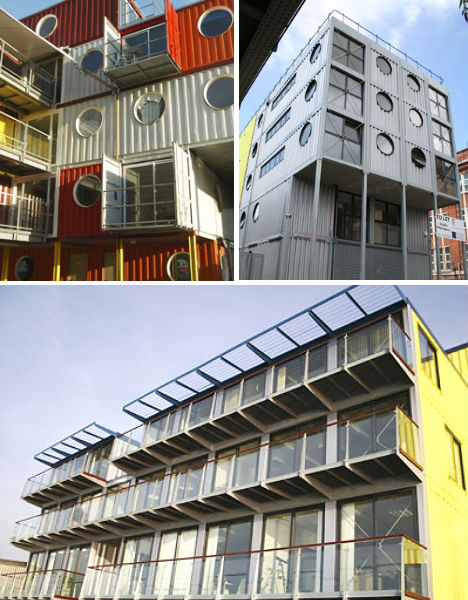 A system for quick, eco-friendly, inexpensive housing and other structures devised by Urban Space Management Ltd, Container City has been used to create no less than 20 buildings in the London area including live/work space, classrooms, a youth center and a sports hall. Three of those projects, pictured above, include Container City II, Pinchin Street Studios and the Riverside Building, all used as studios and office space. 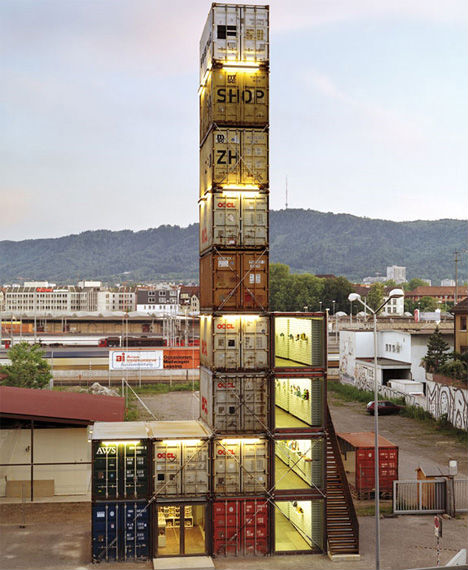 17 rusty recycled freight containers tower into the sky in a precarious-looking structure connected only with elements from the shipping industry to ensure that the building will someday be easy to disassemble. It’s a fitting building for the flagship Freitag retail store, which sells bags made from recycled tarps. 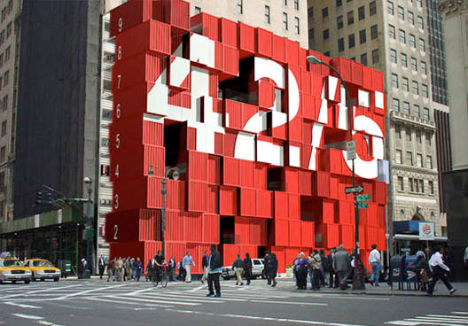 If the creative minds at LOT-EK had their way, Midtown Manhattan would include quite a showpiece of container architecture in the form of a bright red nine-story mall. Their concept for the corner of 42nd street and Fifth Avenue would give each store a single crate, and shoppers would meander along a system of catwalks, elevators and stairs to get from one store to another as well as to the adjacent building. 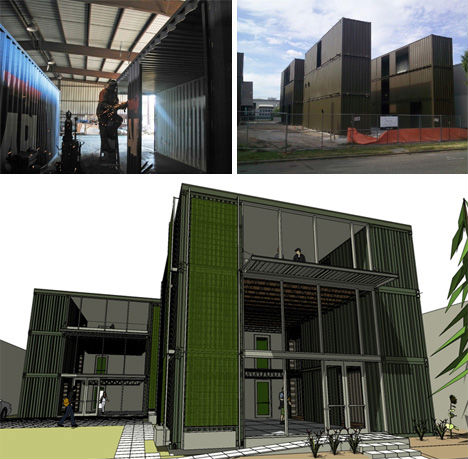 Seattle’s first cargo container buildings, known as ‘Cargotecture’, bring over 7000 square feet of office space and a retail showroom to the city in a modern design by HyBrid Architecture & Assembly. Using these prefab modules cut construction costs by 20% – 40%, and it only took four hours to put the containers into place with a crane. 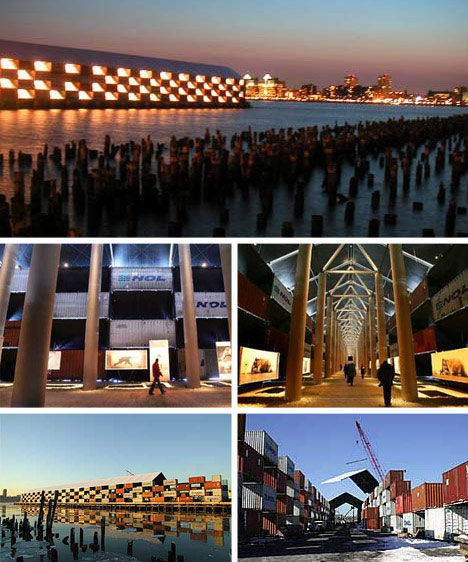 Shigeru Ban’s Nomadic Museum definitely uses cargo containers in a big way, making them the main element of this 45,000-foot-long traveling art exhibit. Made to be easily disassembled and moved to a new city, the Nomadic Museum  – housing the Ashes and Snow photography and film exhibition by Gregory Colbert – visited New York City, Santa Monica, Tokyo and Mexico City between 2005 and 2008. 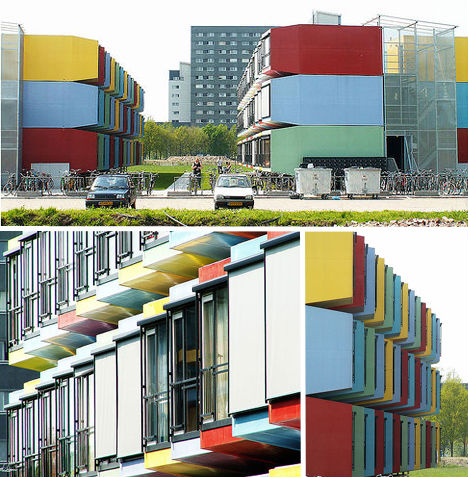 With the shipping containers slightly modified so that the ends taper, the container housing for students at Utrecht University in the Netherlands gets a unique look in a rainbow of colors. The texture of the containers is also smooth rather than the usual corrugated steel. 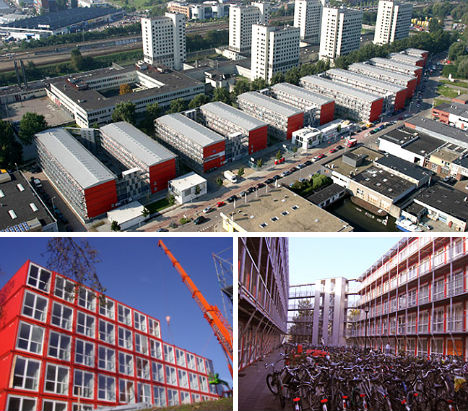 Amsterdam’s Keetwonen student housing complex is the largest shipping container city in the world with 1,000 apartments. Each modular unit is forty feet long and one end is entirely glass, allowing for a surprising amount of natural light. Every apartment even has its own balcony. The units were arranged into ‘blocks’ with little courtyards and the complex contains a cafe, supermarket and offices. 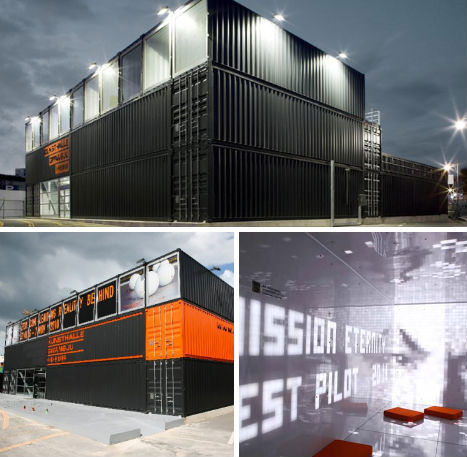 Dark gray and orange cargo containers are stacked together to make up the Platoon Kunsthalle art center in Gwangju, South Korea. The containers were arranged to create a large open area in the center. Say the architects, “As a social sculpture the art is created by the existence of this venue and its interaction with the people. It is not a white cube to display finished art pieces of international artists for mere consumption. Cultural development will be experienced by new art strategies which pose questions of contemporary life and a global society.” 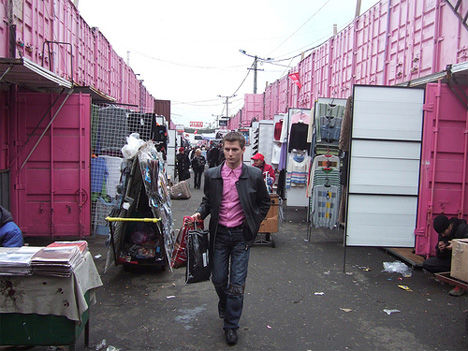 Located seven kilometers outside Odessa city limits in Ukraine, hence the name, the Seventh Kilometer Market covers over 170 acres and consists of untold thousands of steel shipping containers where vendors hawk everything from suspenders to Gucci handbags of dubious authenticity. Just like the Dordoy Bazaar, the containers are double-stacked; it could take days to navigate the market in its entirety.

Travelodge Made from Containers, London 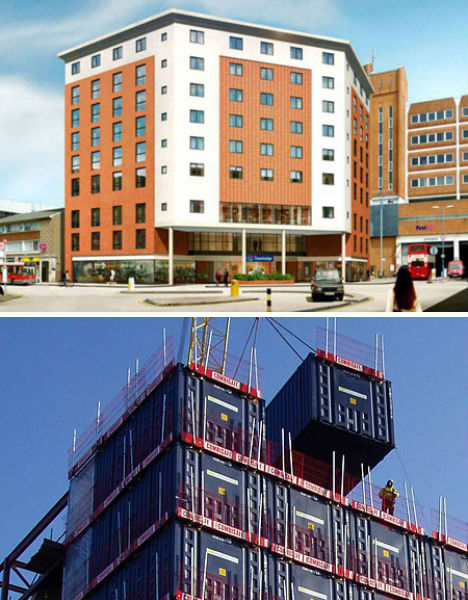 (images via: the metro)

It was complete ten weeks faster and for nearly half a million dollars less than a conventionally built Travelodge, and once the facade was put on, you couldn’t even tell that it was made from shipping containers. 88 containers were retrofitted in China, shipped to the UK and used to create the 8-story Travelodge in West London. Builder Verbus Systems claims that it reduced on-site waste by 70% using this method of construction, and plans to build another container Travelodge at Heathrow Airport.