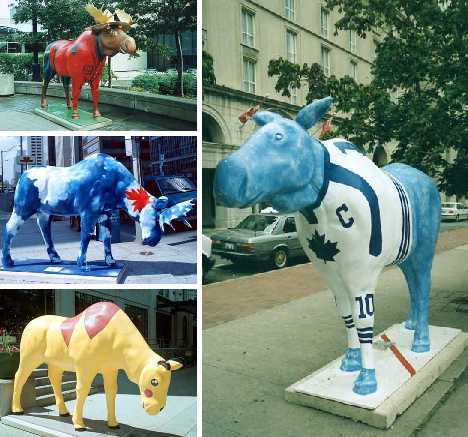 Once upon a time in Toronto, blurting out “Hey, nice rack!” could get a guy slapped. Then the moose came… 326 fiberglass Bullwinkles, scattered across the city, artistically decorated and auctioned off to corporate sponsors. A decade later, only a few dozen of the street beat bleaters remain. Who will be the last moose standing? 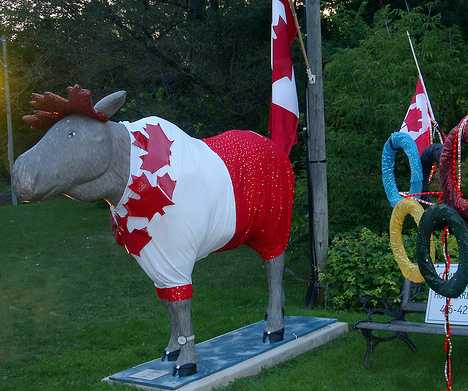 Want to attract the Olympics? Use moose as your bait. That, in a nutshell, was the driving force behind one of Toronto’s more a-moose-ing boondoggles – we’d call it a white elephant but, you know… Anyway, the year was 2000 and the bigwigs at City Hall were looking at ways to spend money. “Spend”, not save; this is Toronto, understand, and being a wannabe World Class City means you don’t do things on the cheap. 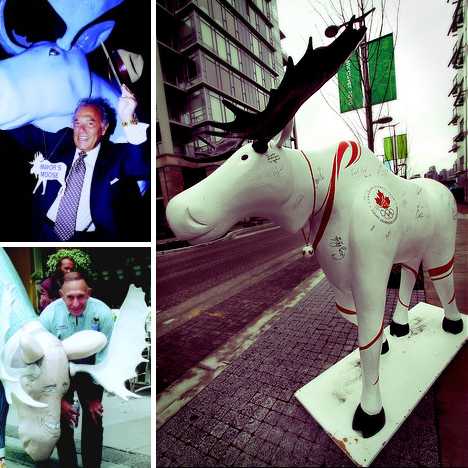 Toronto’s bureaucrats, elected councillors and (especially) mayor “Mega Mel” Lastman were feelin’ fine and dreaming big. Y2K came and went without catastrophe, and opportunity came knocking when Toronto put in a bid to host the 2008 Olympic Games. That the games would be awarded to Beijing, China was pretty much a foregone conclusion at the time but hey – being in the running gave city boosters just the excuse they needed to, well, boost the city’s profile. Introduce moose! 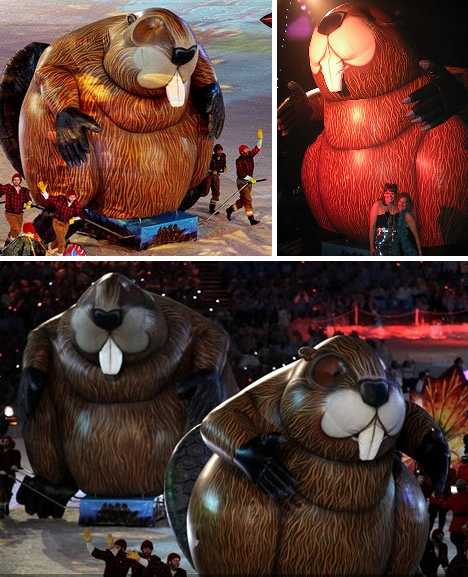 (images via: Notes From The Bartender, Angela Bright and Geist)

Why moose and not, say, beaver? Though the latter is arguably animal kingdom’s most Canadian of creatures, the dammed rodents are just too small for the project’s intended purpose: to act as statutory templates for artists to paint and subsequently attract notice. One might consider using giant beavers but anyone watching the closing ceremonies of the 2010 Winter Olympics in Vancouver know how that worked out. 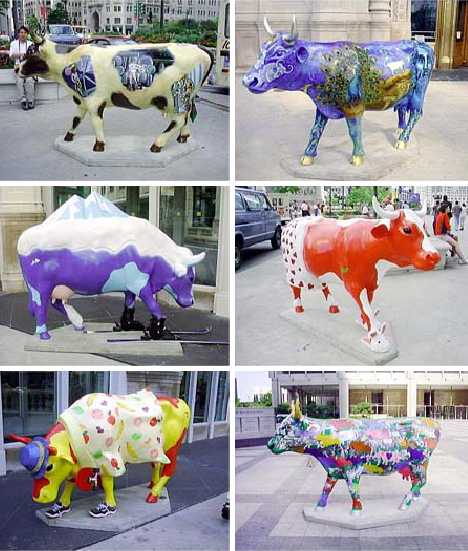 Nope, moose were to be the muse, and besides: other cities had already proven the concept. Remember Cows on Parade (Chicago, above), Pigs on Parade (Seattle) and the “Big Pig Gig” (Cincinnati)? No? Never mind, Toronto was determined to break the mammalian mold with “Moose In The City”… and to anyone who immediately thought of “Sex and the City”, for shame! 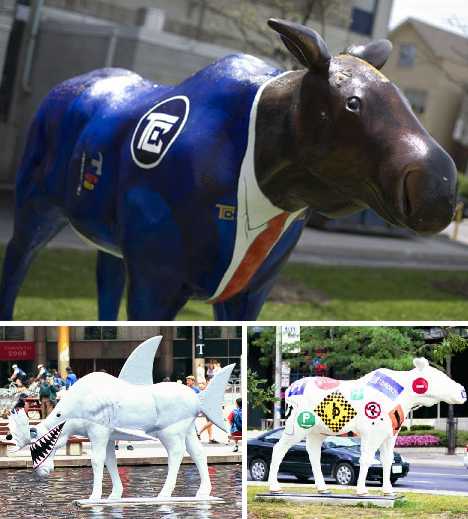 Toronto’s urban landscape underwent a moose-sterious transformation between April and October of 2000 as plastic pasture prowlers, alone or occasionally in pairs, even an uber-freaky moose in shark’s clothing began to occupy boulevard medians, wading pools, storefronts and parkettes from one end of the Megacity to the other. Goodbye Hogtown, hello… Moose Jaw? Moosonee? Moose Factory? Er, Moosessippi? 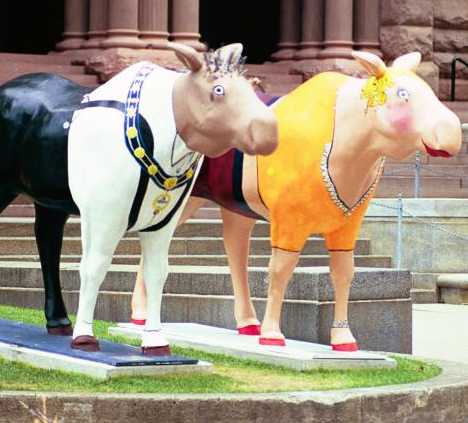 Perhaps the most famous of the paired moose were a loving couple painted up to resemble Mayor Mel Lastman and his wife Marilyn – we’re sure she was thrilled. The matrimonial moose were mounted on the front lawn of Toronto’s Old City Hall. A tracking website called Moose… The Documentary lists Mel Moose as “missing” but Marilyn Moose as “located”. Sorry, Marilyn. 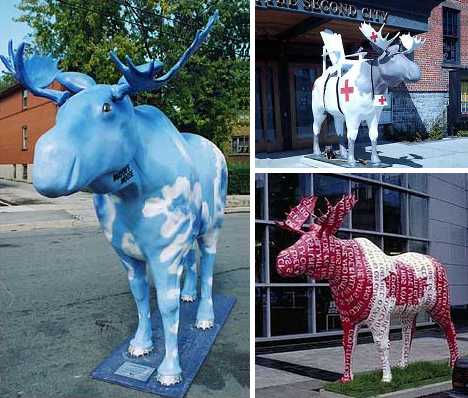 (images via: Toronto.ca and Speak of the Devil)

The original Moose was designed by Charles Pachter and all 326 originally were fitted with the woodland ungulate’s trademark antlers. Unfortunately, the antlers’ add-on construction worked all too well in reverse: most of them were stolen by souvenir hunters within just a few weeks. 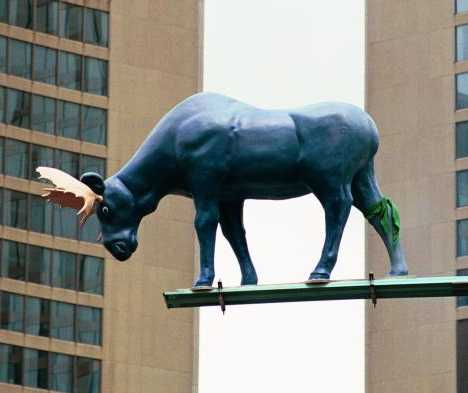 When the city was told of the problem they immediately announced rewards would be paid for any antlers turned in… you can probably guess how that bit of genius worked out. Only a rare few moose mounted in difficult or impossible to access niches, say, on a diving board overlooking the reflecting pool in Nathan Phillips Square, managed to hang on to their horns. 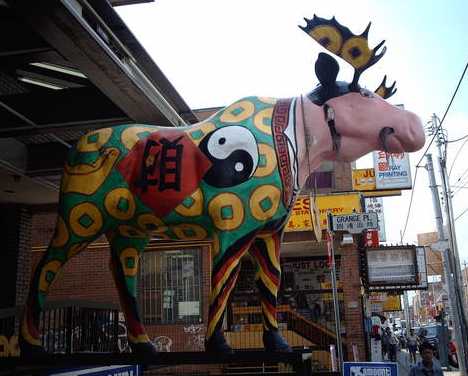 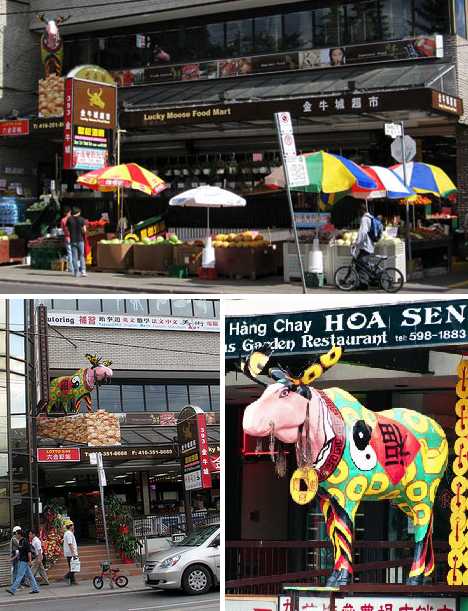 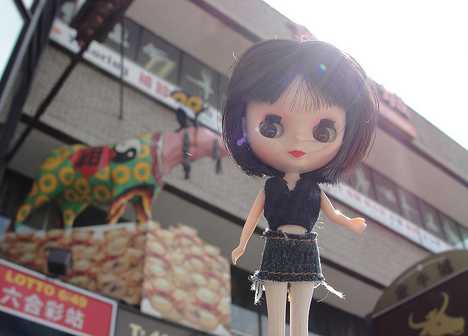 Even Blythe thought the Lucky Moose was worth notice, as the photo above taken in the summer of 2010 shows.

“With the click of a mouse, you can buy a moose!” 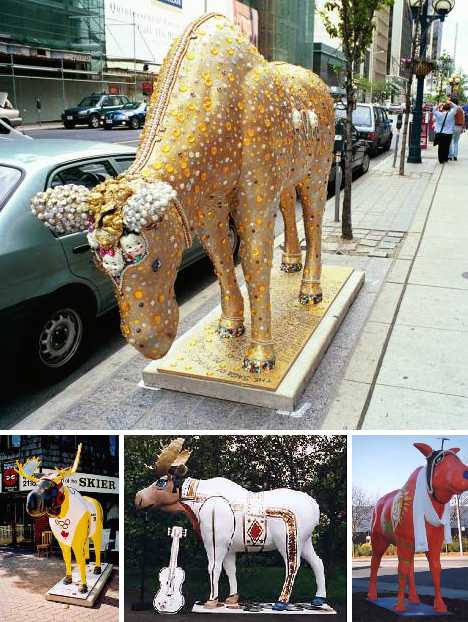 Or at least, you could. The Moose in the City campaign had another hoof to drop, and for 2 weeks in January of 2001 about 150 of the fiberglass moose not already corporately owned or sponsored were auctioned off. The Great Moose Auction was designed to benefit 75 local Toronto charities and offset some of the multi-million dollar cost of the Moose in the City project. Though the Great Moose Auction was expected by some to raise up to $3 million, the actual results were far off that lofty goal: just $1.4-million ended up being raised. 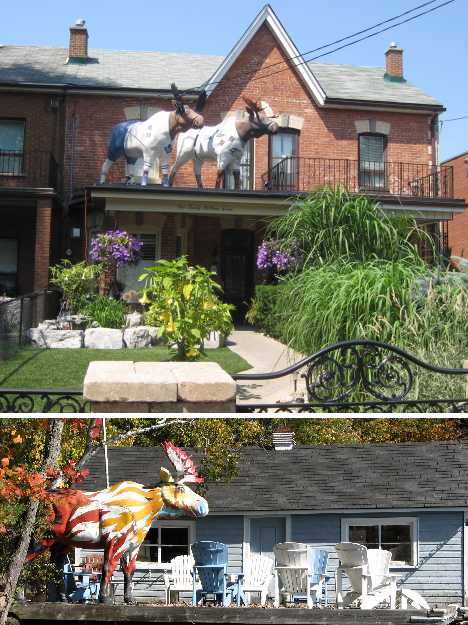 Not all the auction winners were fat-cat corporations, which has led to a number of moose sightings in and around Southern and Central Ontario. The examples above now hail from downtown Toronto (top) and a lakefront cottage in Muskoka. 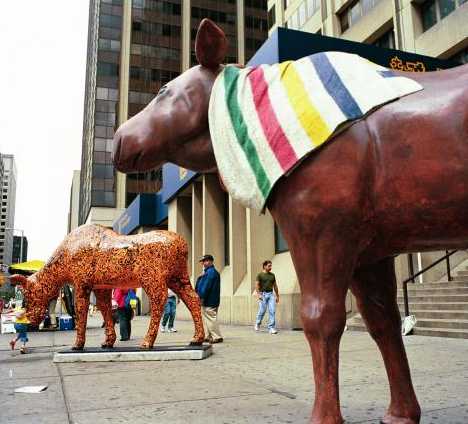 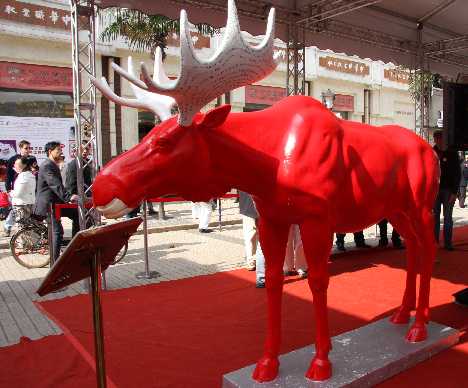 (images via: Boldts.net and Sekkei Studio)

Yet another facet of Moose in the City was the international exposure Toronto would receive and, hopefully, add a little luster to the city’s Olympic bid. Though the latter was a long shot, the former did pan out with nearly 5.5 million total worldwide website hits. Online bidders from across North America and as far away as Shanghai, China, placed winning bids – these moose have roamed far beyond their home range. 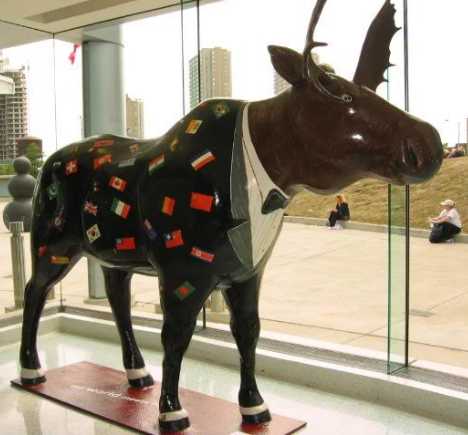 On the other hand (hoof?), the “Global Moose” above, painted by artist Fraser Paterson, looked out on the world from the friendly confines of the Metro Toronto Convention Centre.

The Moose Are Loose 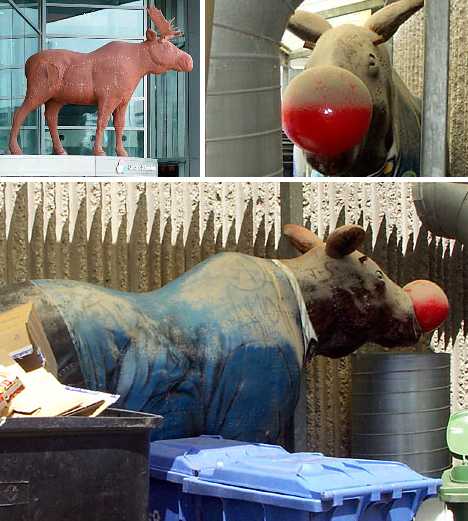 (images via: Toronto.ca and Torontoist)

Depending on who’s doing the counting, between 20 and 50 moose still stand their ground more than 10 years after their much-heralded debut. Some have been repositioned and repainted, others have suffered a less dignified fate. Take the dusty veteran above, spotted in July of 2007 foraging among the recycling bins behind the Ontario Science Centre. Originally painted by artist Shawn Galea, “Time Moose Scape” looks much the worse for wear, even if he IS wearing a suit and tie. 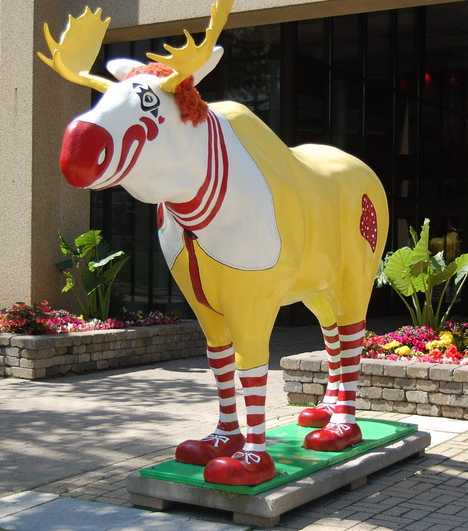 Speaking of being the worse for wear, there’s the World Famous Moose, located outside the McDonald’s Canada headquarters just off the Don Valley Parkway. This rather gaudy moose was clowning around in situ as late as November of 2010, meaning he’s frozen his sesame seed buns off over a number of Canadian winters. Fries with that? 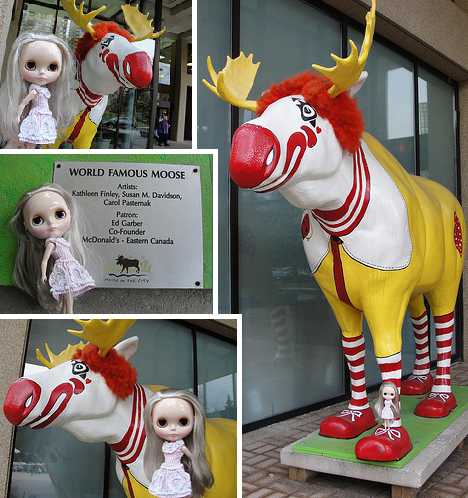 Here’s our weary world traveler Blythe again, checking out the McMoose while adding a dash of cute gothic charm to the scene’s general air of creepiness. 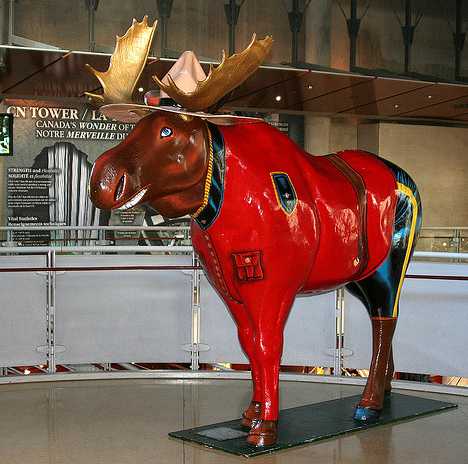 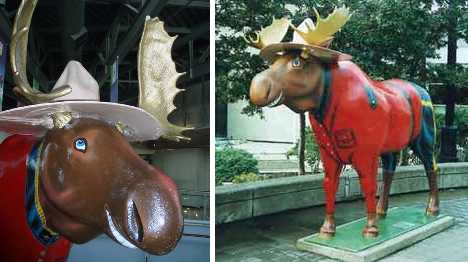 Much more fortunate (and dignified) is the fully antlered-out Mountie Moose, who wears a toothy grin to match his natty RCMP uniform and stands on guard for thee just outside the entrance of Toronto’s CN Tower. Call him the mother (father?) of all moose if you like; they just don’t get any more Canadian than this. Beauty, eh!