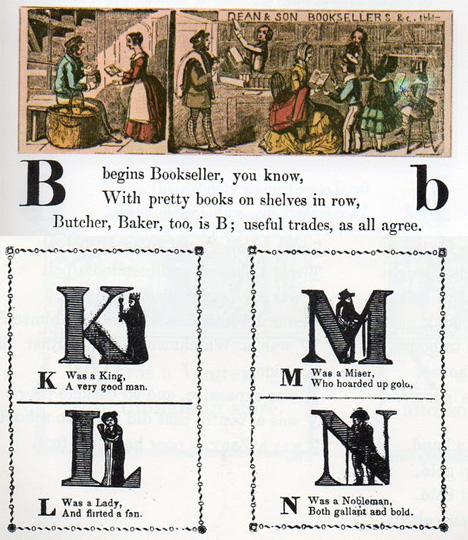 Every generation has had its own unique brand of art and its own ways of teaching children. These incredible occupational alphabets from the mid-19th century are an amusing intersection of the two. Printed specifically for the purpose of helping children remember the alphabet, these pamphlets are full of lovely art and the type of cultural references that are simply priceless to anyone who enjoys unusual glimpses into American history.

A Was an Archer, or a New Amusing Alphabet for Children, 1843

The idea behind these occupational alphabets was to give children familiar words by which to remember the letters of the alphabet. They are, perhaps, not as effective as the teaching aids we employ today – but they certainly make for some interesting reading. 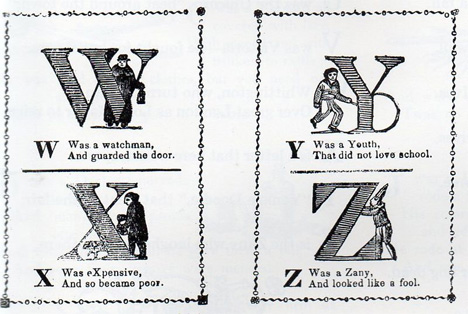 Most modern parents would not think of teaching their children with examples like “R was a robber, and hung as you can see” or “D was a drunkard, and had a red face.” By the standards of the late 19th century, however, these amusing little couplets were perfectly appropriate for children. 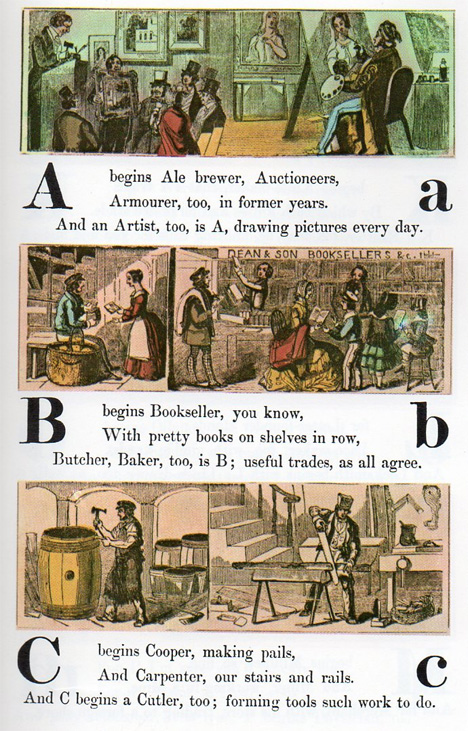 The second set of occupational alphabet drawings are in color and feature even more intricate woodcut art. Most of the letters include several examples of occupations, giving an unusual glimpse into what life must have been like 150 years ago. 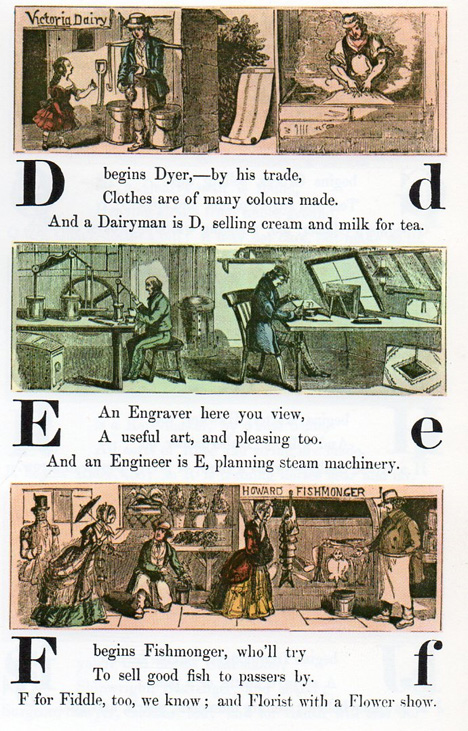 Because these words had to be familiar enough for the children reading the pamphlets to recognize immediately, the occupations featured in the pamphlets had to be well-known household words. How many children today would know what a wharfinger, fishmonger or cooper is? 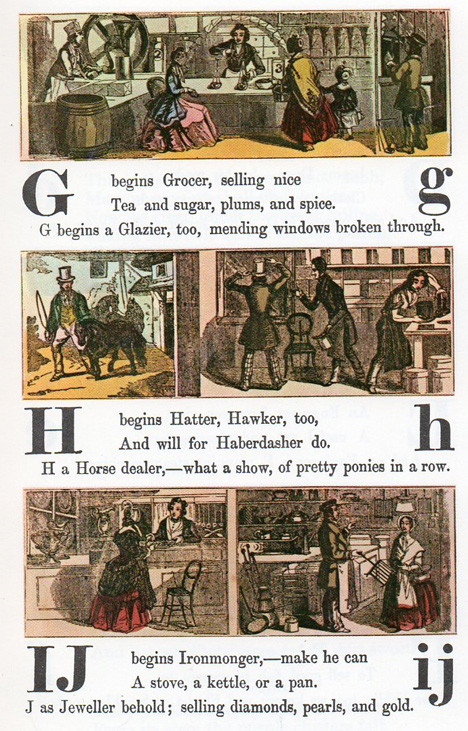 As pointed out at the source of these images, the occupations mentioned in these educational aids highlight just how much the world has changed in this relatively brief amount of time. Several of these jobs simply do not exist any longer. 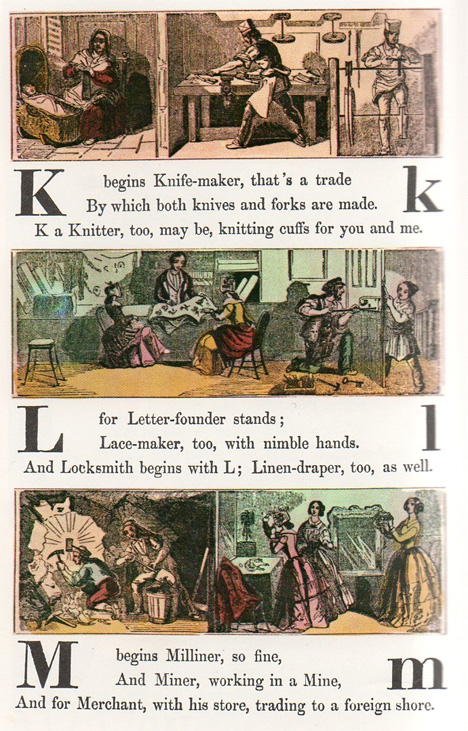 According to Ptak Science Books, only seven of the 59 professions mentioned here are completely defunct today, with the remainder still functioning in some way – not a bad percentage for professions which were commonplace more than 150 years ago. 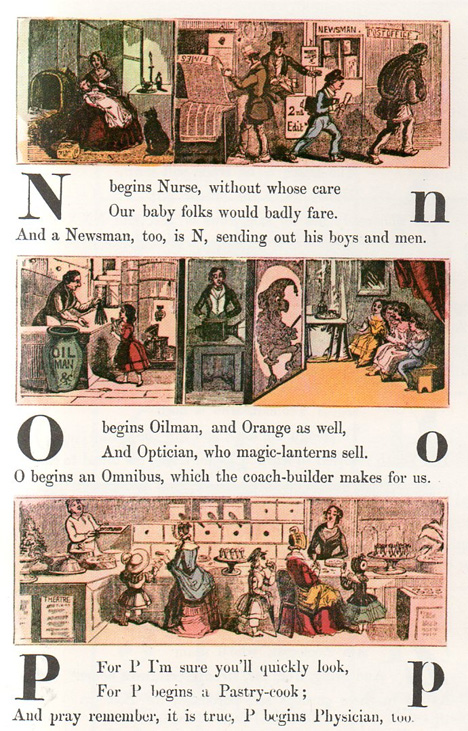 The art itself is exceptionally interesting, giving a look into the fashion and work environments of the 19th century. For woodcuts which have been enlarged from their original 5″ height, the detail is stunning. 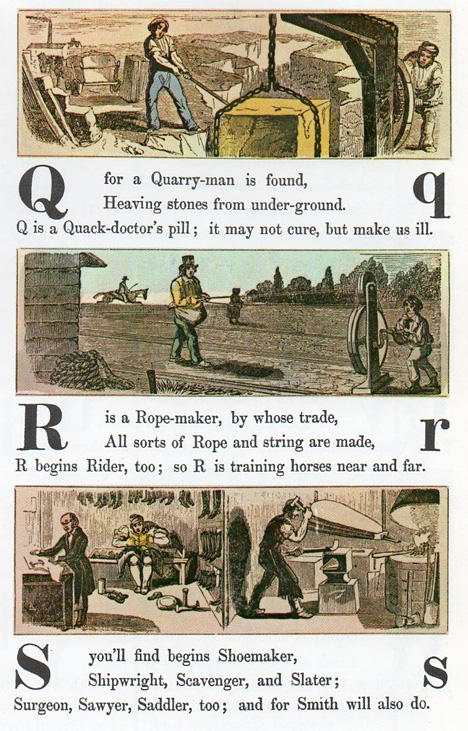 Much like the educational primers that would follow generations later, these little alphabet learning aids used rhymes and a bit of humor to keep children interested and help them remember the important facts. 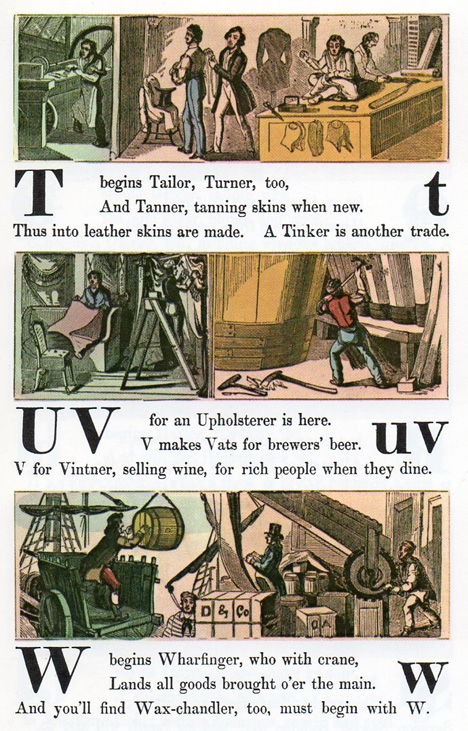 It would be interesting to know whether teaching aids like this actually helped children to remember the alphabet or whether they spent most of their time looking at the pictures (like we have). 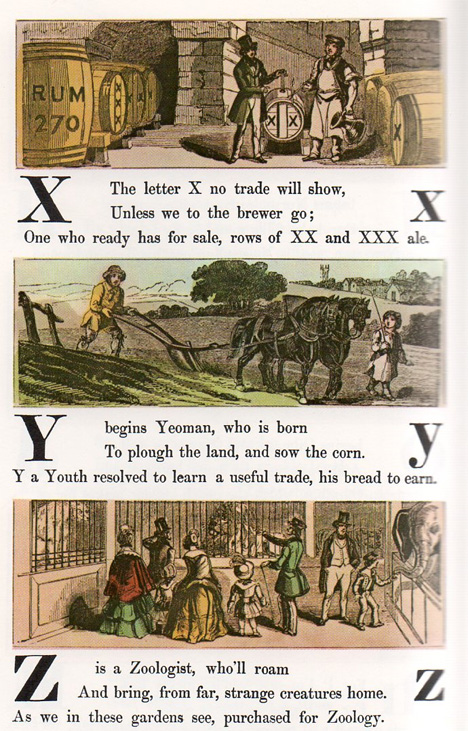 Particularly note-worthy is the “Y” in this alphabet, with a young man learning the trade of yeoman to earn his own keep – something which would never be suggested today.