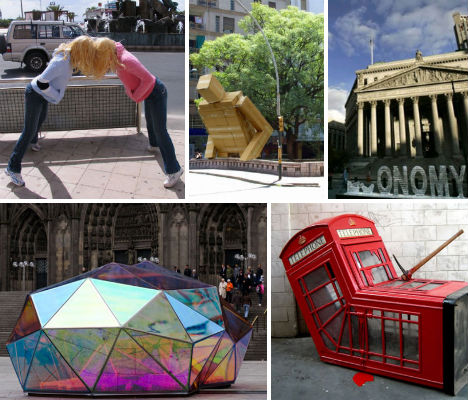 All ephemeral, lasting a few weeks or maybe just a few hours, temporary street art installations are a colorful and engaging addition to ever-evolving urban settings. Some are so subtle that only the most observant of urban residents even notice them, like little sculptures of men in puddles; others are impossible to ignore, like 30-foot cardboard statues looming over the street. Some of these sculptural installations are officially commissioned while many more are stealthily assembled, guerrilla-style. Shocking, fun and often interactive, these 14 works bring art to the masses rather than cooping it up in museums. 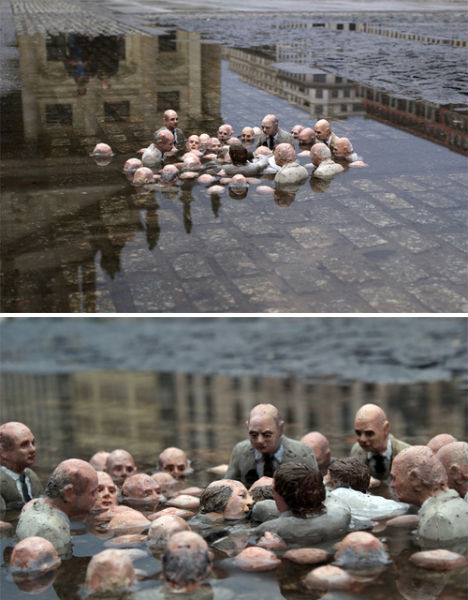 You could easily pass by Isaac Cordal’s diminutive sculptures, which perch on electric outlets, telephone poles and bus stop benches. But if you’re observant enough to notice their presence, you’re pulled into a tiny world within the larger urban environment. This particular installation was noticed by an art lover in Berlin. Says Cordal, “Many of my sculptures I leave on the street, usually stuck on walls.  I don´t leave the sculptures on the street for people to take home. Street art is for everyone, not for just one person.  But ok, those people which have sculptures at home could at least send me a picture so I can see that the boys are well.” 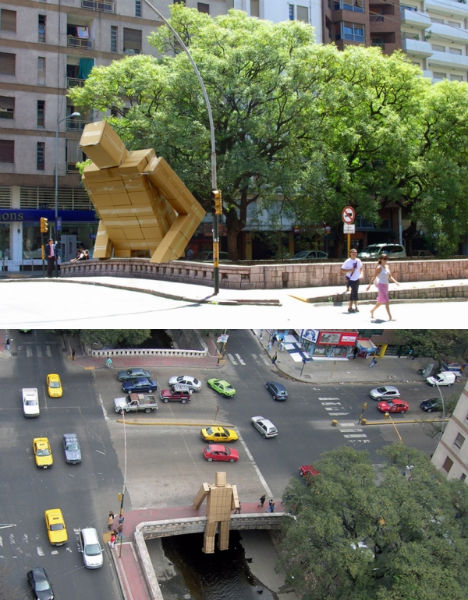 Whereas Cordal’s sculptures are subtle and small, this installation by Argentinian artist Pablo Curutchet is anything but. The 900-pound box man was installed in Boulevar san Juan and av. Marcelo T. Alvear, Córdoba, Argentina, in 2006 stood nearly 28 feet above street level and was constructed entirely out of cardboard boxes and tape. It took 11 people to mount it into place. 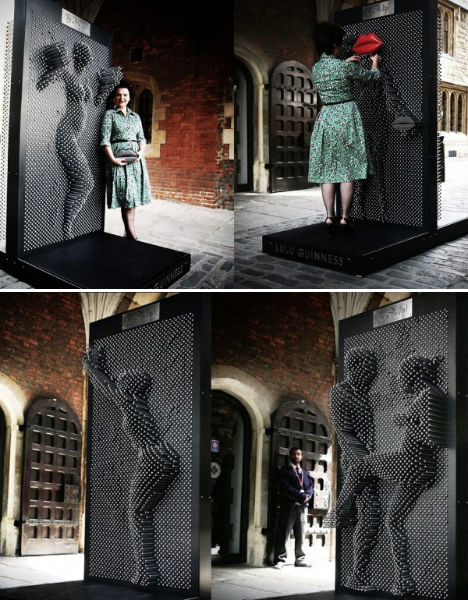 Designer Lulu Guinness, known mostly for her handbags, created this fun ‘Be a Pinup!’ human-sized pinscreen in front of London’s St. John’s Gate in May. The interactive art installation let the public create full-sized body portraits by pressing up against 6,000 chromed capped aluminum pins in a black frame. 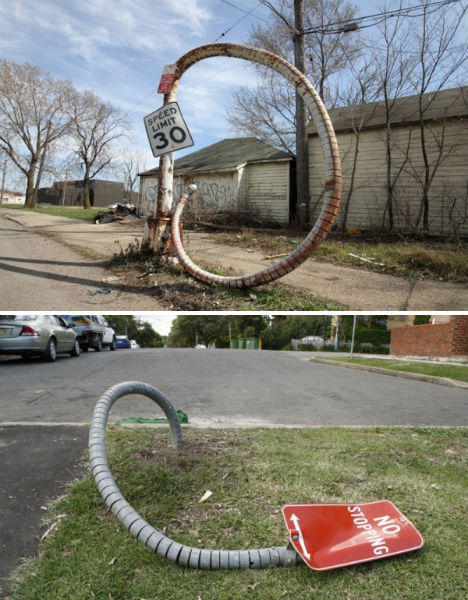 These eye-catching segmented street sign sculptures are just the beginning of Melbourne-based Robbie Rowlands‘ collection of mind-bending works. Rowlands takes very precise slices of objects and even spaces (like cut-outs of floors and walls) and curls them up in various contortions. From doors and chairs to trees and water towers, Rowlands’ manipulations call to mind tightly controlled destruction. 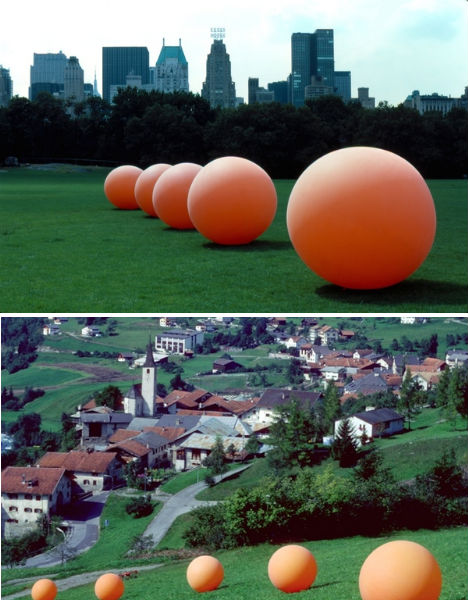 For two and a half years in the 1980s, artist Stuart Williams took his five six-foot inflatable orange spheres around the world and photographed them in unlikely places, like the streets of France, New York City’s Central Park and an alpine village in Switzerland. The environmental artist is known for monumental installations including ‘Luminous Earth Grid’. 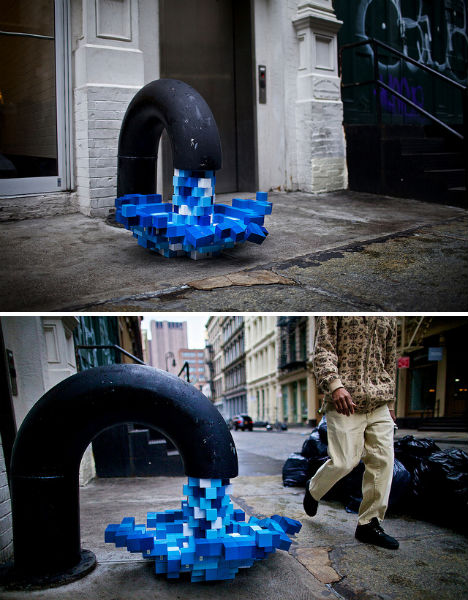 Passersby photographed this fun sculptural installation on Mercer Street in New York City in January 2011, which features ‘pixelated’ water made of little blue and white boxes pouring out of a giant spigot. Deemed ‘Pixel Pour 2.0’, the sculpture is thought to be the work of (or at least inspired by) artist Kelly Goeller, who created the similar ‘Pixel Pour‘ in 2008. 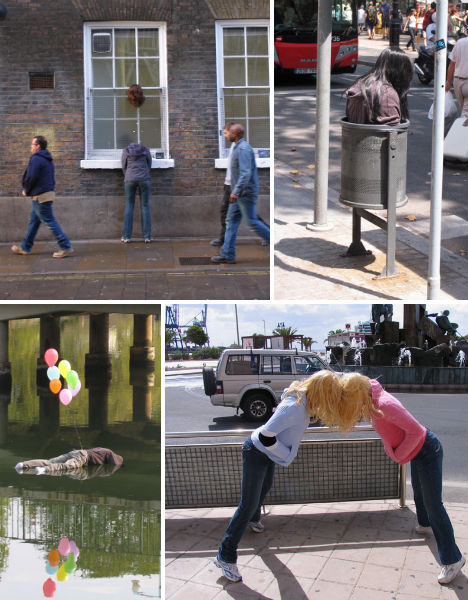 Street artist Mark Jenkins is renowned for baffling and disturbing installations of headless, faceless human bodies as well as for his dreamy, diaphanous tape sculptures. The city is his canvas, and he paints it with utterly surreal scenes that are impossible to ignore. Whether playful, like the head-butting women, or disturbing, as in the ‘dead body’ festooned with balloons, Jenkins’ sculptures are often laced with social commentary such as the dehumanization of the homeless. 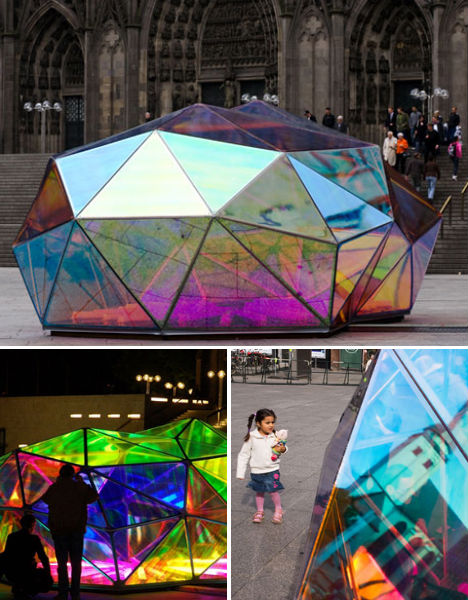 Literally a reflection of the city around it, Marco Hemmerling’s ‘Cityscope’ is a multi-faceted glass art installation that acts as an urban kaleidoscope, catching the light and displaying dream-like fragments of buildings. At night, the sculpture is illuminated from within, shining like a rainbow-colored crystal outside the railway station in Cologne, Germany. 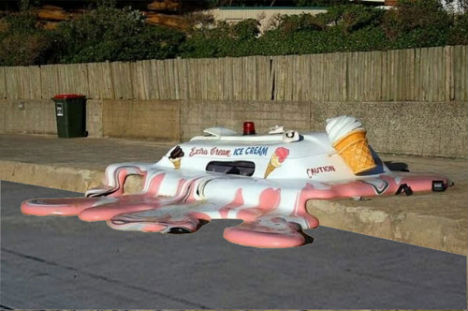 This mysterious melted ice cream truck showed up in the suburban streets of Adelaide in South Australia in 2006. Though the image has been passed around the internet with a big question mark in place of artist credit, it is in fact ‘Hot with the Chance of Late Storm’, the work of Australian art collective ‘Glue Society‘. It was created for the 2006 Sculpture by the Sea fair.

The Brooklyn Griffin by Giant Robots 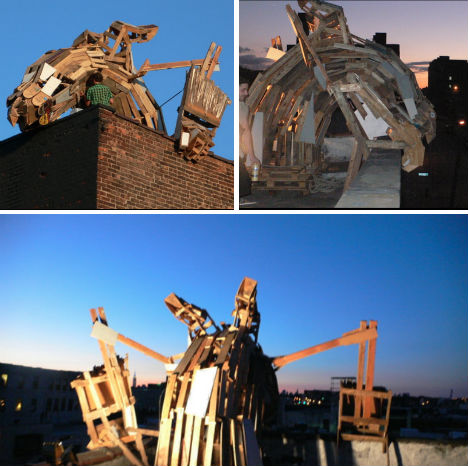 A robotic-looking wooden griffin sculpture looms over a desolate industrial Williamsburg street in Brooklyn, crafted from  pallets and skateboard decks. Artists Jimmy Bumble and Leonard White, who work together under the name Giant Robots, had tried assembling similar robots guerrilla-style on Brooklyn rooftops without success – an earlier version was destroyed the the building’s owner – before finding a legal home for it. They plan to come back and build more along the same strip, on Waterbury Street between Meserole and Scholes Streets.

Urban Nests on Scaffolding in Madrid, by Luzinterruptus 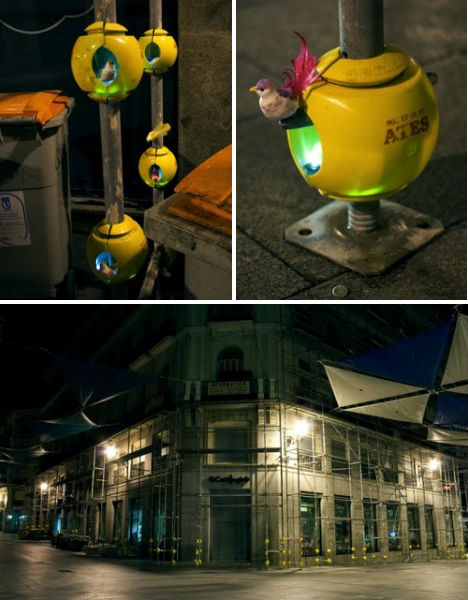 Spanish street art collective Luzinterruptus placed adorable little birds into the yellow spheres, installed on scaffolding joints to prevent injuries, that they had noticed on a street in Madrid. “For our installation Urban Nests, we only had to populate the balls with 130 colored birds, that we left looking into the street from their makeshift homes in the scaffolding and of course light them, to achieve a warm, cozy atmosphere throughout the scaffolded area, inviting one to remain and contemplate such an unusual habitat.” 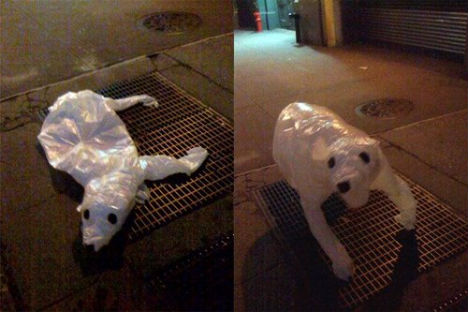 Inflatable animal sculptures by Joshua Allen Harris come alive when placed above sewer grates on the streets of New York. Harris crafts the sculptures from plastic bags; when a train passes, air comes gushing out of the grate, causing the animals to ‘dance’. 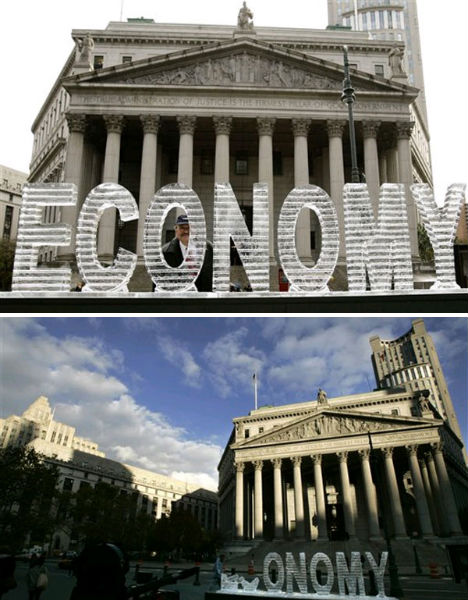 The economic meltdown was illustrated in a very public and literal fashion by artists Nora Ligorano and Marshall Reese in 2008, on the 79th anniversary of the 1929 Black Tuesday stock market crash. The ice sculpture, which spelled out ‘ECONOMY’, was placed across from the New York State Supreme Court Building in Manhattan’s Foley Square and allowed to melt. Said Ligorano of ‘Main Street Meltdown’, “To see the word ‘economy’ melting down is representational of our extreme time.” 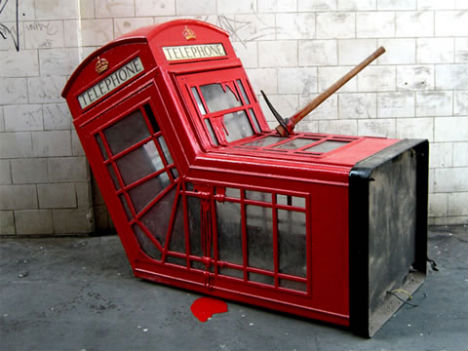 Anonymous street artist Banksy might be best known for his two-dimensional stenciled paintings, but he’s actually a sculptor, too. ‘Murdered Phone Booth’, an unauthorized outdoor art installation which appeared in London’s SoHo Square in 2006, is just one of the famous artist/documentary director’s three-dimensional works. The British Telecom telephone booth was bent and pierced with a pick-axe. BT later jokingly offered to purchase it and place it in their lobby as a “stunning visual comment on BT’s transformation from an old-fashioned telecommunications company into a modern communications services provider.”