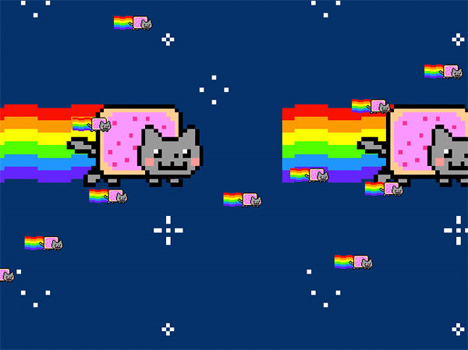 As far as internet memes go, there have been some pretty bizarre ones over the years. But the Nyan Cat has to be right up there with the most head-scratchingly weird of them. What started out as a cute little video on YouTube has now taken over the whole interwebs with its addictive yet intolerable music and hilariously cute 8-bit style. Who would have thought that a cat with a Pop-Tart body flying on a rainbow set to annoying music would be so attractive to so many people?

The latest incarnation of the odd Pop-Tart cat meme is NyanIt.com, a site that lets you plug in any URL and watch tiny Nyan Cats fly across the page. Let them go long enough and they’ll reproduce and grow bigger, eventually taking over your entire screen so that you can’t see anything else. Finding homework boring? Plug in the URL of the research material you’re studying, then challenge yourself to read a whole page before ridiculous rainbow-riding (or rainbow-farting, depending on who you ask) kitties fill up your monitor. You can try clicking them to make them go away, but they’ll only think you want to play and start growing even faster.

The meme was started way back in April of 2011 (ancient history in Internet time) by prguitarman, the guy behind LOL-COMICS. He drew a funny picture of a cat with a Pop-Tart body and a rainbow coming out of its bottom. YouTube user saraj00n set the cat to music and posted it for the world to share. Since then, it’s taken off in an insane way. In addition to the original and the screen-cluttering example above, there are tons of other bits of web silliness that take the eternally happy Nyan Cat to whole new heights.

If you happen to be in the mood for meme overload, try using NyanIt on the Nyan.Cat website…and then add in some Fale and some Bacon for good measure. The awesome combination is part breakfast food, part zippy music and part vaguely insulting comment. All together, the memes make for some interesting viewing – or at least an amusing way to waste a bit of time.

If the Hamster Dance and the crazy eHarmony Cat Lady had a baby (and then fed it nothing but Pop-Tarts and speed), it would look and sound like the Nyan Cat. In fact, the guys behind the Songify This app put the eHarmony Cat Lady’s kitty-centric rant to music and invited the lovable Nyan Cat to make a cameo in the video.

Of course, the citizens of the internet can never do things by halves – so there are endless variations on the Nyan Cat theme. There’s the real-life Nyan Cat, the Mexican Nyan Cat, SpeedyNyan, and the Americ-Nyan Cat, among countless other remixes, mashups and variations. Some of the most notable Nyan Cat videos are the ones that are looped over and over and over to run for hours. They aren’t for the faint of heart, however. Most humans will lose consciousness long before they can listen to that song for more than a few minutes at a time.

If you’re feeling brave, though, head on over to Nyan.cat to see how long you can nyan – then tweet your score to show off to your friends. Only the extra-brave will dare to add the additional layer of nyan with NyanIt.com.

Not everyone is a huge fan of the rainbow-riding kitty, as evidenced by the kids in this video. The majority of the reactions seem to be negative, but maybe the kids just aren’t giving Nyan Cat a fair shake. Give him long enough and he’ll burrow his way into your brain until you hear the “Nyan Nyan” song in your sleep. Maybe if they played the Nyan Cat: Lost in Space game they might develop some affection for the little cat. 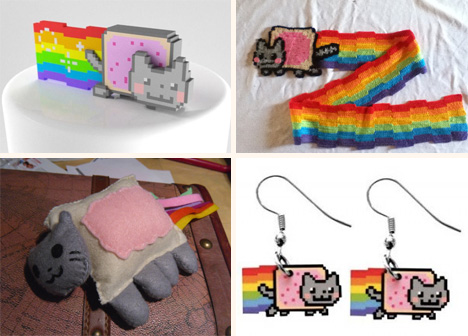 As with many internet memes, this one has made its way into the meatspace world as well. Nyan Cat cupcakes, scarves, toys, jewelry and art are plentiful, varied and full of awesome. Even though Nyan Cat seems to be everywhere these days, it’s entirely likely that you’ll find yourself missing the smiling cat face one day soon. When that happens, sneak over to your co-workers’ desks while they’re at lunch and use NyanIt to add some nyan to their home pages. They’ll thank you one day.