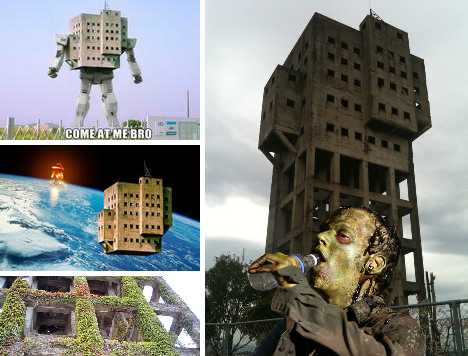 When the Zombie Apocalypse finally arrives, the winding tower at Japan’s abandoned Shime coal mine is where you want to be. This stark, partially moss-covered concrete colossus has been abandoned for nearly a half century yet its moldering remains serve as a reminder of a harsh industrial past when coal fueled mighty engines of destruction. 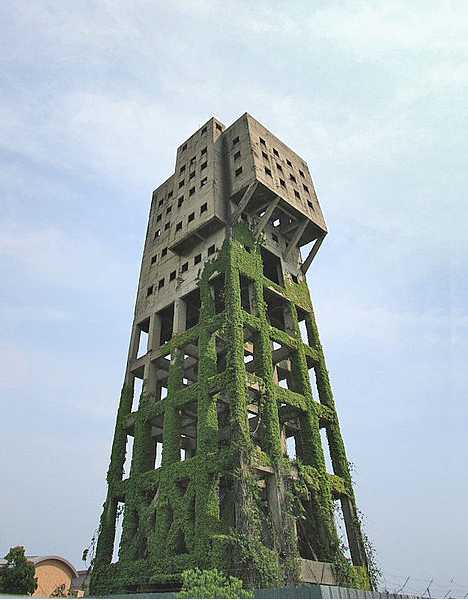 The winding tower of the former Shime coal mine near the city of Fukuoka, Japan, is unusual even in a country chock full of abandonments. For starters, many of the country’s better known urban ruins date from a very recent time period when Japan’s government doled out dollops of cash to pretty much any man with a plan, hair-brained or not. The results included unpopular and unsuccessful theme parks like Gulliver’s Kingdom, situated in the shadow of Mount Fuji next to an unfortunately popular “suicide forest”. 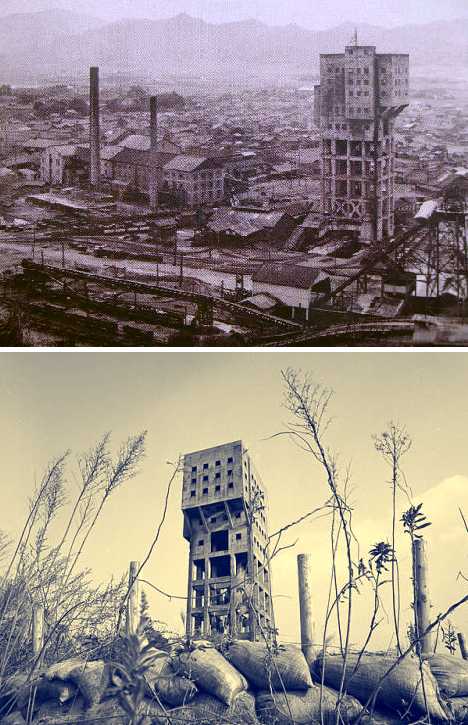 (images via: Focuslight and Hibiki15)

The Shime coal mine tower, on the other hand, dates from the middle of World War II: it was built between 1941 and 1943 to help increase the yield of a coal mine established in 1889, and it’s really a wonder the Allies didn’t bomb it to smithereens. Operated by the Imperial Japanese Navy, the mine was rumored to have “employed” Allied POWs so perhaps its survival through VJ Day was just as well. Indeed, the tower and the mine below operated until 1964 when it was finally closed for good. 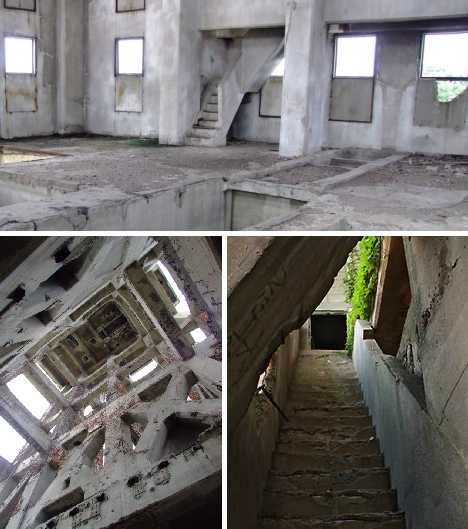 The 47.65 meter (156.3 ft) tall tower is of an odd design, having offices and control rooms located above the actual, long gone winding mechanism – huge reels of cable which raised loads of coal from the mine and lowered empty containers and workers back into the depths of the mine up to 430 meters (1,411 ft) below. 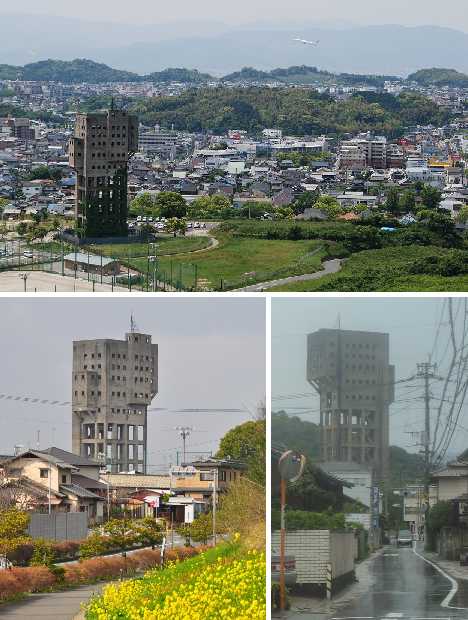 (images via: Tomo-Maru, Abandoned Kansai and A Blog of Sean)

As mentioned, the winding tower is located in the town of Shime but “located” is perhaps too mild a term: it dominates the town the way Dracula’s castle dominated… whatever Transsylvanian town it happened to overlook. 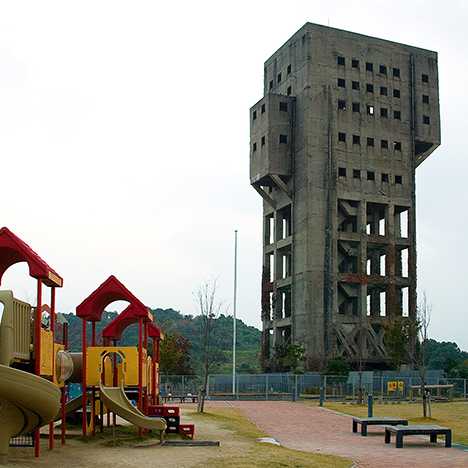 One wonders what the good people of Shime think about their town’s most outstanding attraction. It may be that they don’t give it a second thought; and indeed, recent publicity (an NHK TV special, for one) has likely attracted visitors to Shime who wouldn’t otherwise give the tiny burg a second glance. 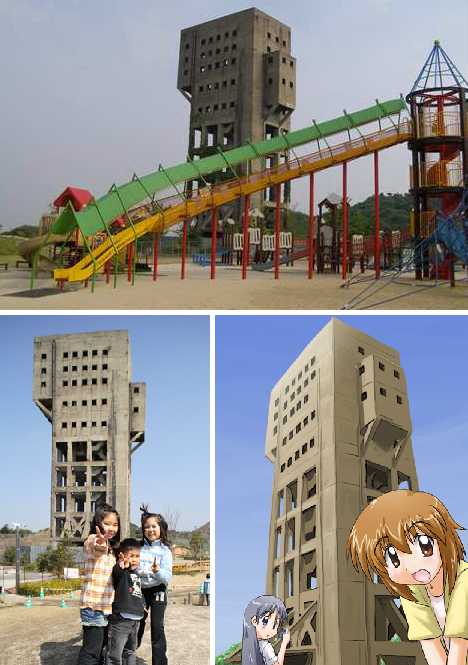 Shime’s children, likewise, give the tower only passing notice – they’re too busy playing on the colorful swings, slides and monkey bars installed practically in the ominous tower’s shadow. Good to know someone’s finally thinking of the children! 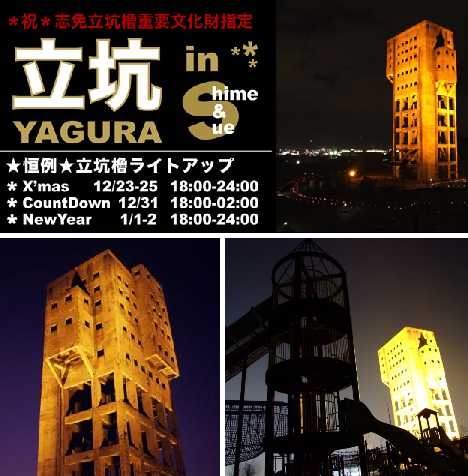 The local and regional authorities are getting into the “spirit” as well. Though decrepit enough to warrant the erection of chain link fences to keep out the increasing number of overly curious tourists and urban explorers, the winding tower’s grounds have been spruced up and a lighting system installed to highlight the gloomy structure’s intriguing architecture after nightfall.

Thanks for Teh Meme-ories 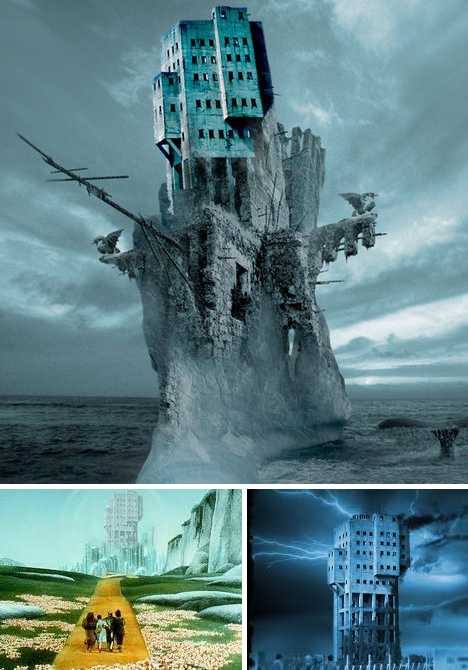 (images via: Know Your Meme and Matome)

For decades the Shime winding tower quietly mouldered away in obscurity until suddenly – Teh Intarnets! It seems some imaginative wag with a liking for zombie flicks stumbled upon (possibly via StumbleUpon) an image of the tower, and immediately deduced it would make the Best. Anti-Zombie Fortress. EVAR. 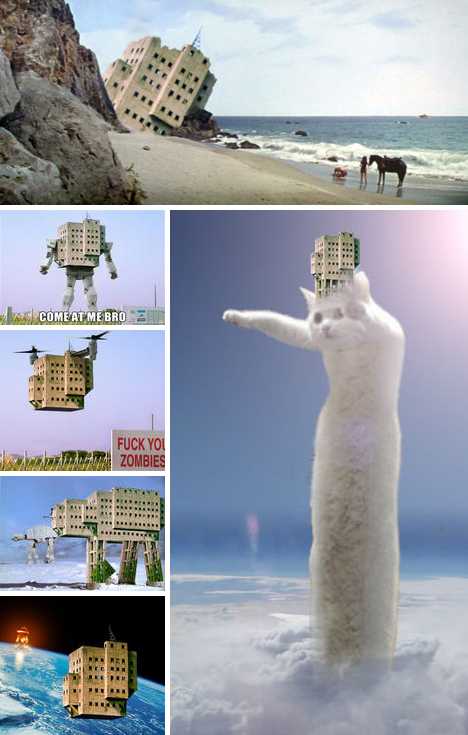 (images via: RKTM’s Tumbler Blog and Know Your Meme)

And so it began: one thread at Reddit begat another, and yet another, and soon Photoshop contests ensued along with much hilarity. The Anti-Zombie Fortess Meme soon took on a life of its own, and it takes no braiiiins to figure the Shime winding tower is destined to be cast as a prime location for some upcoming zombie flick. 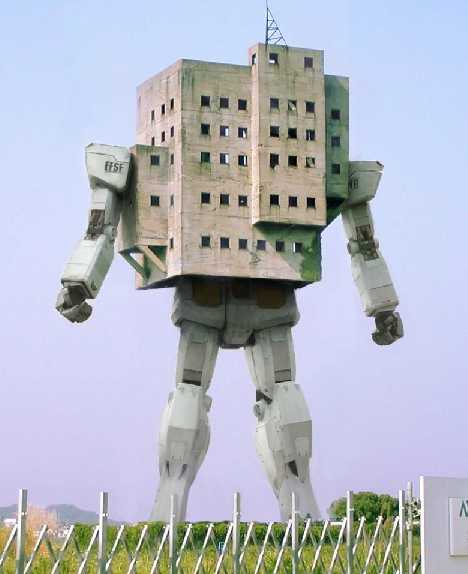 You’ve got to hand it to the Netizens, some of their rad mods to the Shime winding tower are truly inspired works of geek art. The “Mobile Gundam Tower” variation is especially er, special, and necessary as well: when the bodies of incapacitated zombies pile up and begin to form an undead ramp, just grab your bootstraps for a walk-off WIN. 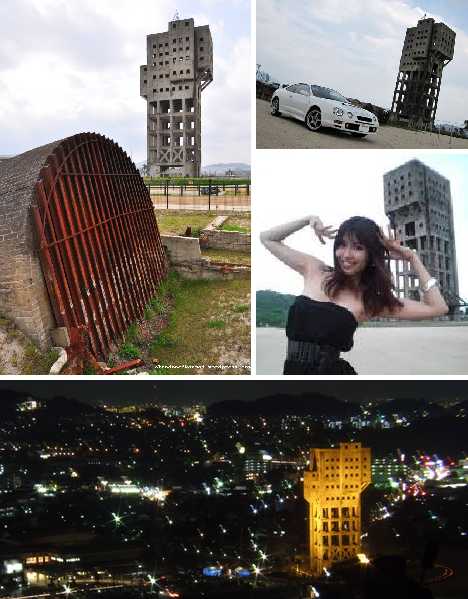 What does the future hold for the Shime coal mine’s winding tower? Its war-era reinforced concrete is deteriorating and Japan’s economy doesn’t lend itself to the overly generous lending of days past. 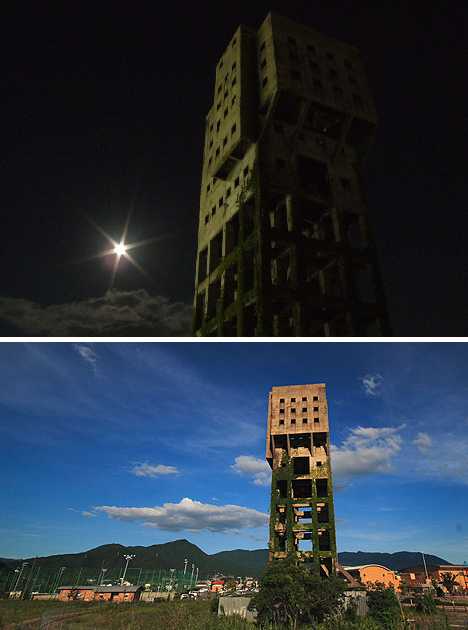 (images via: XX Toshio and JerseyCattle)

Perhaps preservation is in the cards, however. On December 8th, 2009, the Shime coal mine’s winding tower was designated as an “important cultural property” by the Japanese government, thus guaranteeing some degree of protection along with the aforementioned fence and lighting. 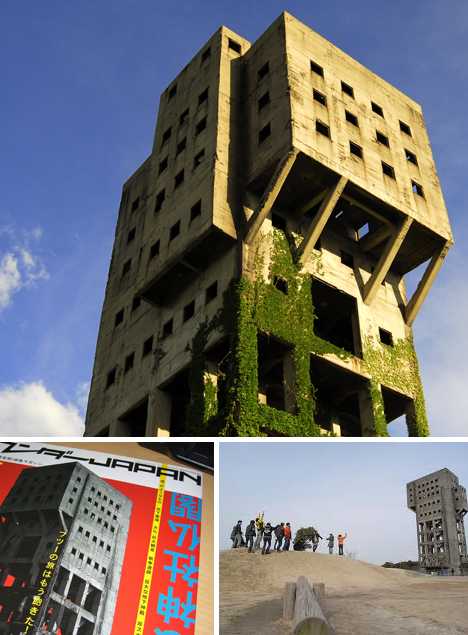 Japan has few large-scale architectural relics dating from the era of the Pacific War, and the Shime coal mine’s winding tower joins Gunkanjima (“Battleship Island”) as one of the few to have survived mainly intact… though it would make a much better anti-zombie fortress, by far. 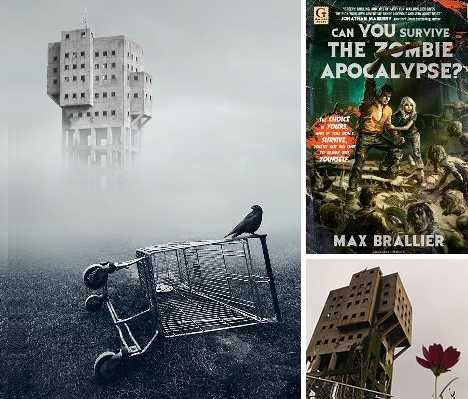 Netizens’ efforts aside, the winding tower of the former Shime coal mine doesn’t really need any help to look spooky and forbidding, in this humble scribe’s opinion. 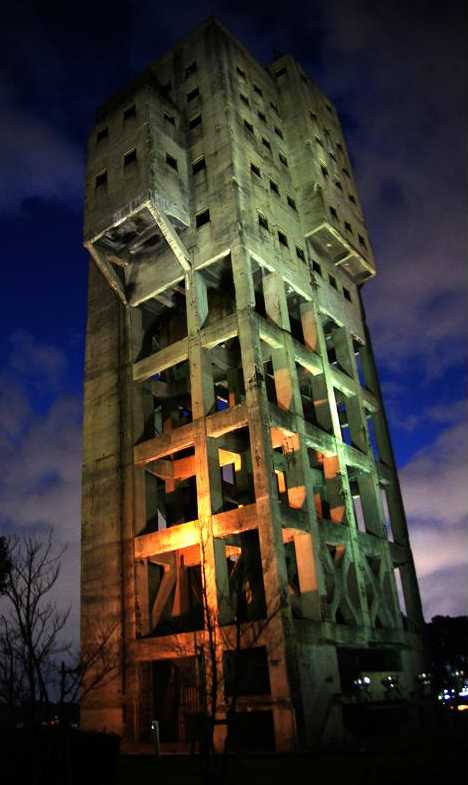 Even on bright summer days bathed in warm sunshine, the overgrown structure appears to harbor an ancient malevolent presence that waits, patiently, for darkness (and perhaps, civilization) to fall. Hmm… apocalypse or not, maybe I’ll just take my chances with the zombies.