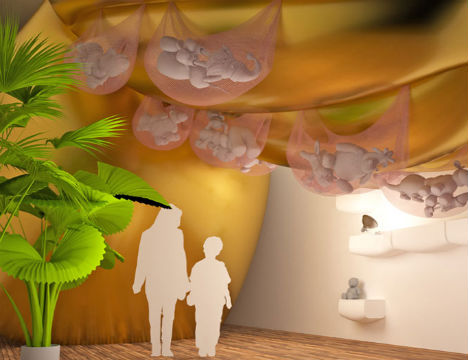 Would ‘voluptuous fat membranes’ make you want to buy jackets and gowns? The Los Angeles Design Group submitted a highly unusual proposal called ‘Pigs in a Box‘ for the BOFFO Building Fashion project, basing their design upon the integration of a number of massive, partially abstracted balloon animals. 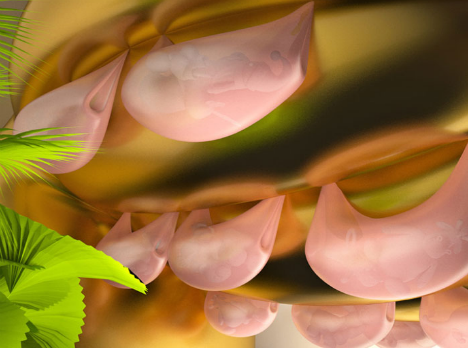 For the competition, emerging architects are paired with contemporary clothing designers. LADG imagines inserting fabric inflatables into an existing retail storefront space, which visitors experience without fully grasping what it is that they’re seeing and feeling as they move through the store. 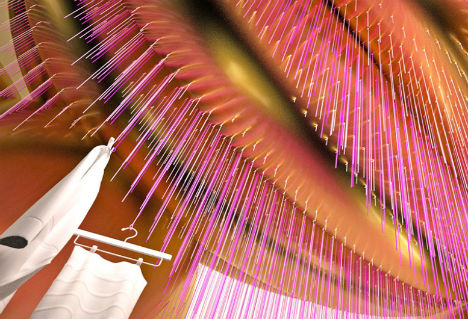 The space is divided into different areas like ‘Under the Belly, Eden’, in which visitors pass beneath the belly of the animal, which hangs with pouches containing stuffed animals. Another area, ‘The First Hug’, squeezes visitors ‘lovingly’ between a wall and a swollen pig protuberance. In the Fat Grotto, Gothic, visitors browse through vintage clothing suspended on day-glo ropes from ‘a bloated, ribbed vault’. 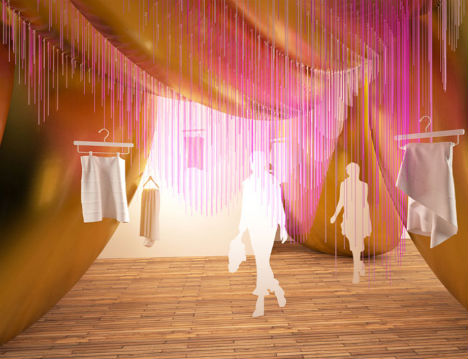 “‘Pigs in box’ does not generate complexity solely through the geometry of the inflatable pigs, but rather through the operation of stuffing a rigid volume with soft bodies. The fullness of this stuffing generates a plan where each space in the sequence is a carefully choreographed encounter between the visitor and the bodily attitude and character of the pigs. Spatial complexity becomes a vehicle for joy, physicality, and surprise.”