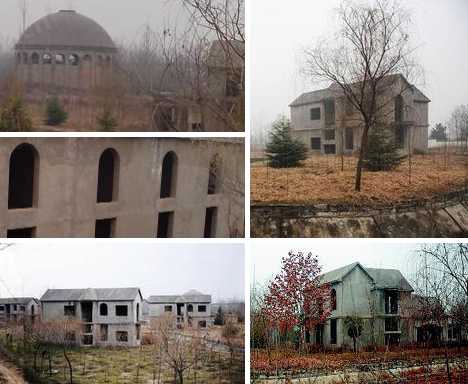 China‘s ever-expanding real estate bubble is spawning empty cities, abandoned resorts and other such “bridges to nowhere” but few of these white elephants are as eerie and gloomy as this unusual, unfinished and unoccupied village of empty villas. 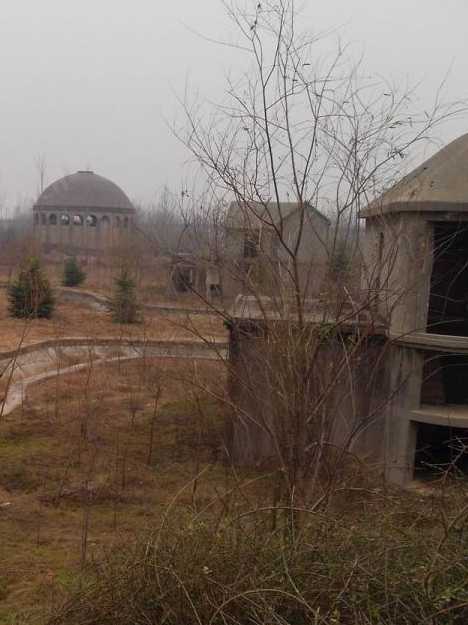 China these days is awash with empty, abandoned and overbuilt housing, office and resort space. This is really saying something, considering China has a population of over 1.3 billion and overpopulation was so great a threat to future prosperity, the nation had to enact a draconian “one child law” to put the brakes on reproduction. 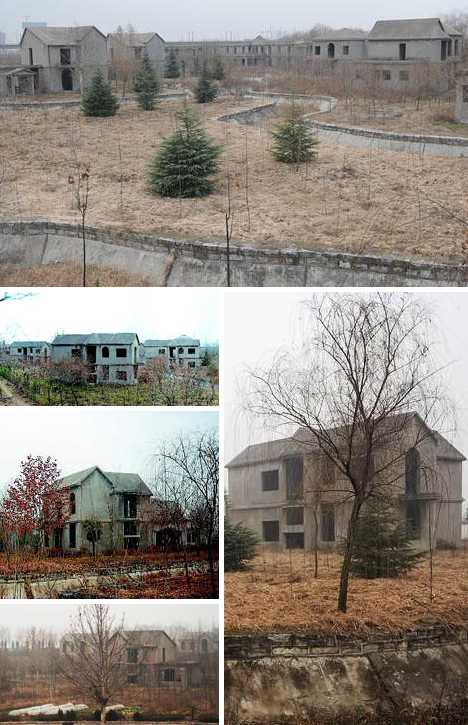 If there’s one thing modern China has more than people, however, it’s money… money that begs to be invested (some might say, laundered) in a virtual Pandora’s Box of get-rich-quick schemes. Many, if not most, of these investment “opportunities” are based on land speculation fueled by easy credit and a vast pool of nouveau riche who have been the prime beneficiaries of China’s great economic leap forward. Unlike many other nations, China’s financial system doesn’t provide many venues for cash investment – a concept that itself would be incomprehensible a generation ago. One might say that China’s financial infrastructure hasn’t yet caught up to the money-making machine that China’s economy has become. 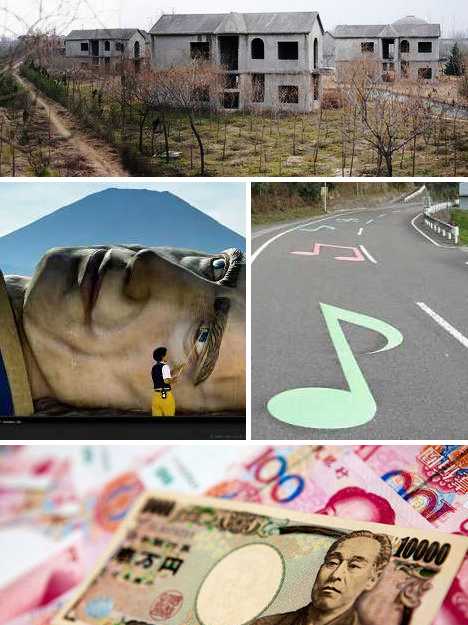 (images via: XYBTV.com, Japanorama and Caixin)

In some ways, China’s construction boom is following in the footsteps of Japan’s real estate bubble – which, as we all know, ended rather badly. Even as Japan’s boom turned to bust, the nation’s government sought to cushion the construction industry by continuing to fund bizarre theme parks, unnecessary shoreline remediation and odd “musical highways”… projects that provided short-term employment only.

Villages of the Damned Speculators 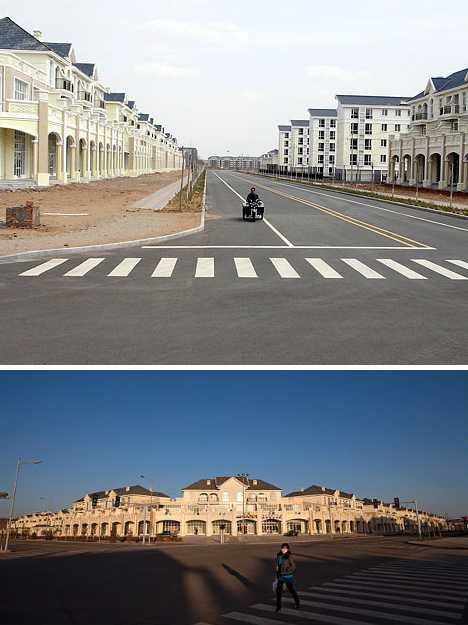 A similar wasteful pattern is being played out in China. Construction is funded for the sake of construction, regardless of any local need. Cities like Ordos sit virtually empty since without any accompanying manufacturing activity nearby, people have no reason to live there (and no income to pay for living space). 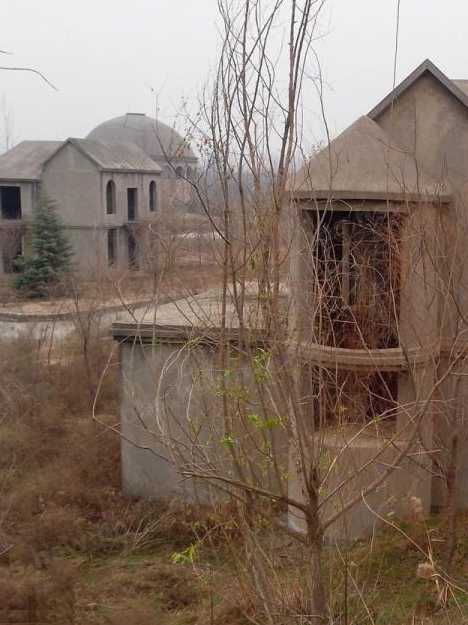 China also suffers from a lack of regulation which has allowed pyramid schemes and official corruption to flourish. Take the unfinished resort complex at Lan Jia Village, in the Baqiao District of Shaanxi province, west of Beijing. The 160-acre complex sits on former farmland, thus depriving farmers of their occupation and markets of fresh and processed food. 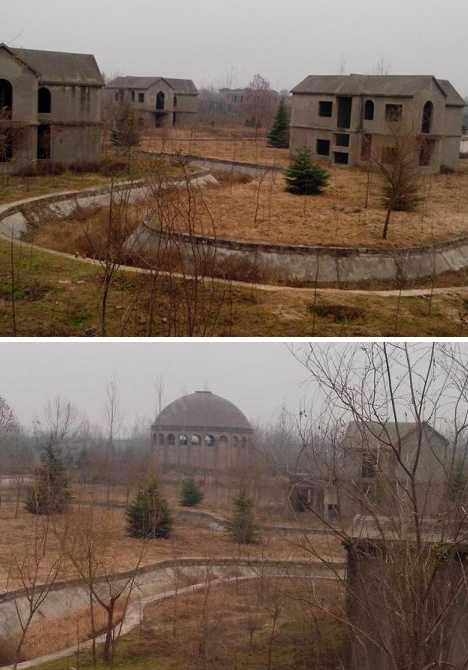 On the face of it, the idea for a resort at Lan Jia Village isn’t a bad one and it wasn’t bad back in 1997 when developers first presented their plans to local authorities. Situated at the junction of three rivers (Ba River, Wei River and Jing River), the complex features a group of two-story, Mediterranean-style villas highlighted by a central domed conference center. Winding paths and canals weave amongst the villas and artful landscaping lent the resort a pleasing, pastoral vibe. 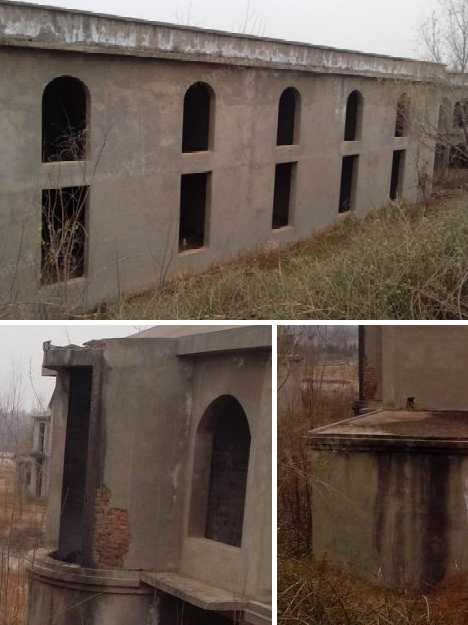 So much for best intentions. Unbeknownst to the developers (or perhaps knownst, who can say?), regional authorities presented a plan for remodeling the shores of the Wei River, preserving wetlands and instituting a green belt along the shore. “The land belonged to Lan Jia Village at that time,” explained Yan Gaochao, an official from Ba Qiao District, to an independent reporter. “The developers had to apply to the homeland department for approval to nationalize the land before using it for other purposes, which began a series of processes. At that time, the developers took a short cut, signed the draft with the government and started the construction right away, never expecting the process to be stuck and/or contradicting with another government project. That’s why the villa cluster is left unfinished.” 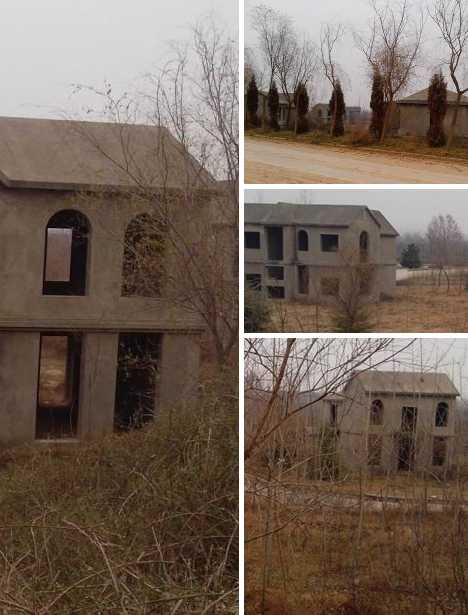 One might expect the 160 acres to be cleared and returned to the farmers who originally occupied it but of course, that’s just too easy. While Yan assured the reporter that demolition of the villas “is inevitable”, he was unable to provide any further information. “There are no guidelines, no laws or regulations to follow through, or to decide whether or not to compensate the developers.” Indeed, nearly 15 years after construction began, the developers are nowhere to be found – perhaps they decided to cut their losses and move on to the next scheme. 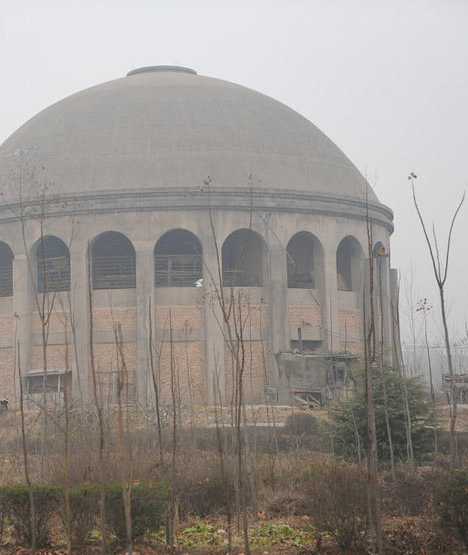 In the meantime, the erstwhile Lan Jia Village resort continues to deteriorate. Windowless buildings offer ingress to sheltering wild animals, inclement weather and local children who play among the ruins. The village does have one tenant, however: a man named Li who lives in the domed conference center building. “I have been living here for 7 years,” stated Mr. Li, who said he was hired to oversee the buildings and do some light gardening. “My boss is only a project manager, I have never seen the real boss.” Odds are he never will.