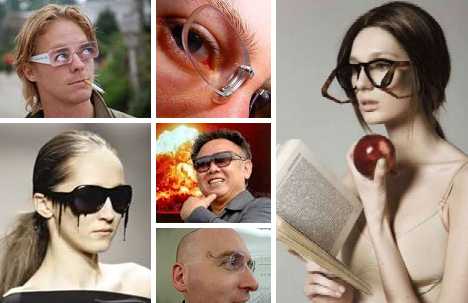 Now see here! The ayes may have it but now you can too, thanks to these amazing eyeglass and frame designs that cornea the market on out-of-this-world eyewear. It’s a pity, really, that you only have two eyes with which to make a spectacle of yourself but at least there are other options for living a life made in the shades. 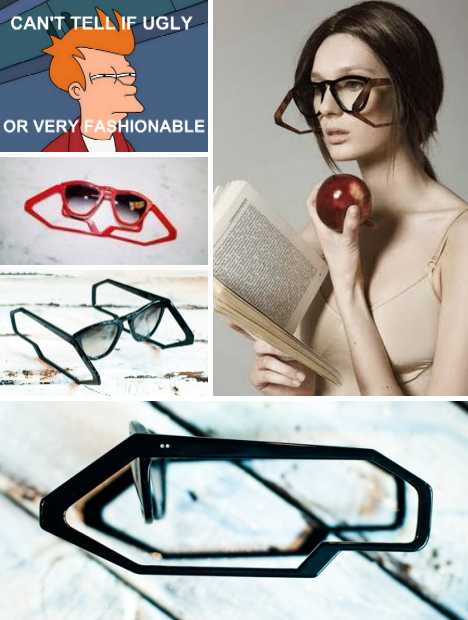 Who is Ketevane Maissaia, and why is he/she foisting these maximalist eyeglasses on us? According to HypeBeast, the concept for the sunglasses was “inspired by Soviet architecture”… which tells you just about everything you need to know. Oh, you can pick up a pair (don’t strain your back) at the Think Silly Store in Hong Kong. 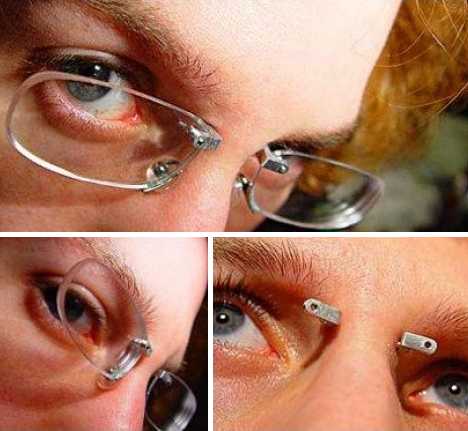 (images via: ChooseUrFun and AnswerBag)

Tired of eyeglasses constantly sliding off the bridge of your nose? Sure you are, but wanting to screw the darned things on and actually doing it are two different things – both of them kinda nutty. This “edgy” implanted eyeglasses mounting may look like a clever, creepy photoshop but as much as you’d like to believe that, pierced bridge glasses are as real as the pain of installation. 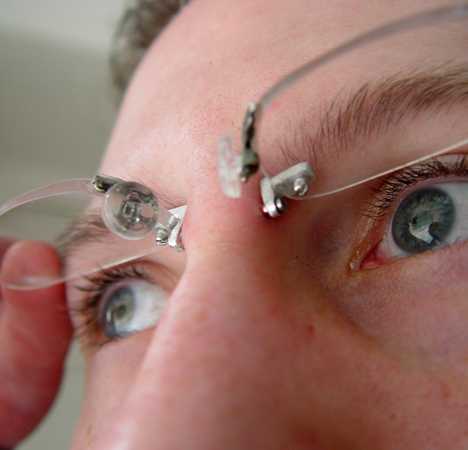 (image via: All About Colored Contacts)

The concept was originated by James Sooy working with Oliver Gibson. Tiny magnets in the frames attach to flat areas on the bridge implant for a secure and exact fit. They aren’t available to paying customers just yet but one thing is certain: people will want it done if only for the shock value. 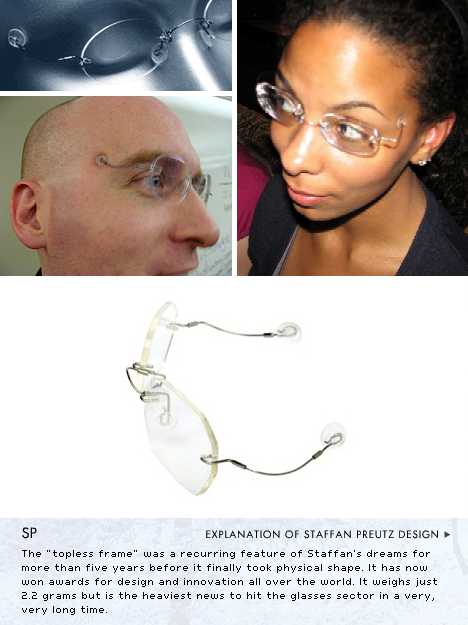 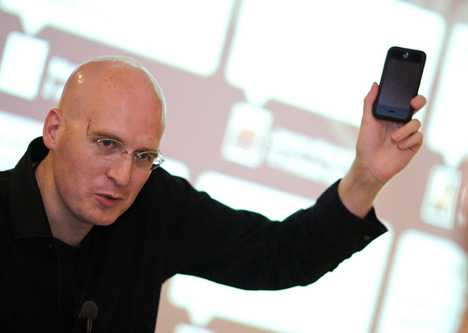 (image via: Only Ideal)

The unusual design relies instead on an ultra-lightweight (2.2 grams) springy titanium alloy frame that grasps the temples by way of a soft pad on either side. Borg nanoprobes not included. 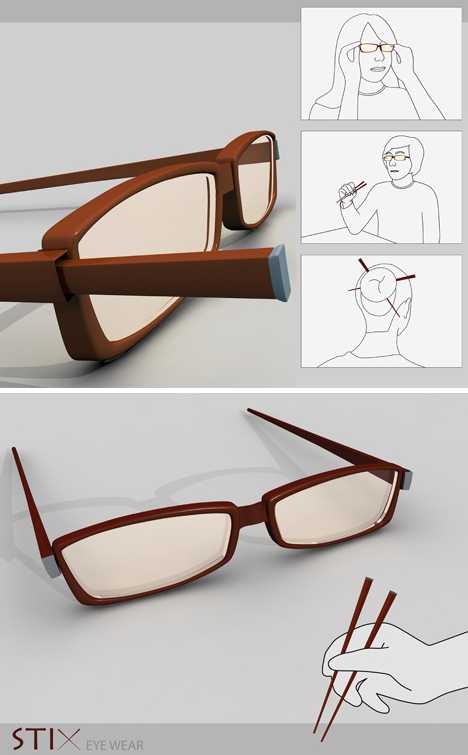 (images via: UberReview and Yanko Design)

“Don’t leave home without it,” cautioned Karl Malden in those old American Express ads, and if you’re on your way to a swanky Japanese restaurant for dinner you don’t want to forget your eyeglasses or chopsticks either. What to do? Wear a pair of Stix Eyeware, of course! Brad Gressel‘s curious combination of glasses and chopsticks melds the best features of both, solving your little problem in one fell swoop… unless you forget to wear them, I guess, thereby doubling your trouble. 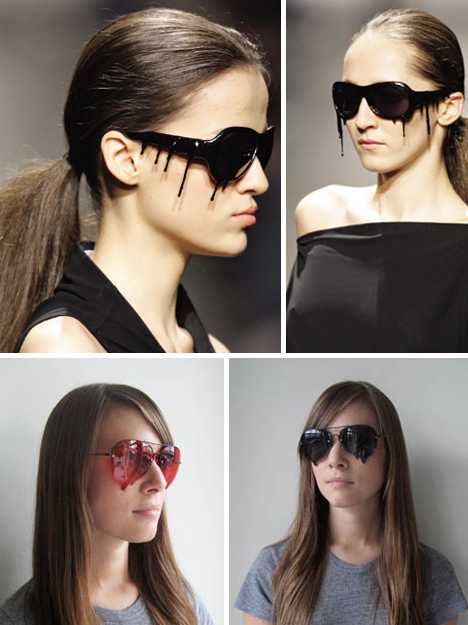 These “dripping” sunglasses look like the product of a glassblower in a hurry but not to worry, they’re not all that hot… and we mean that in a good way. 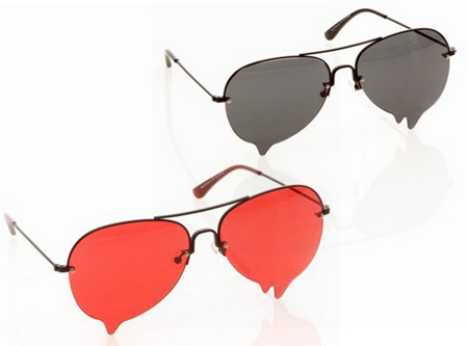 (image via: Your Vogue Glasses)

Debuting on models strutting high-end fashion runways back in 2009, the ghoulish & gothic sunglasses originally designed by Anna Ter Haar were subsequently made mass-marketable by designer Ann-Sofie Back, and are now available in your choice of Smoke or Red… more like Smoke or Fire, hmm? 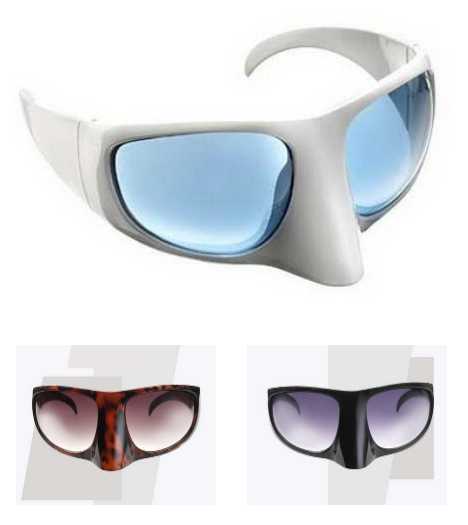 (images via: Sunglasses Fashion and Trendhunter)

Say hello to my leetle friend with the beak sunglasses… and thank fashion designer Linda Farrow for these and other eye-popping (sorry) designs favored by Lady Gaga and the like. Of course, the Poker Face hitmaker (gah, can’t believe I wrote that) can get away with wearing oddball eyeball covers while you most likely can’t. 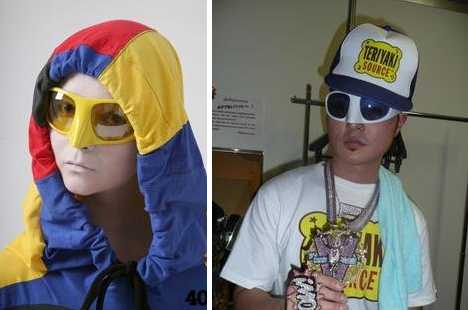 One exception is (are?) the Beak Sunglasses above, which are ideal for sunbathing and beach-combing as they sport a built-in nose shade. The hoi polloi can use zinc oxide. 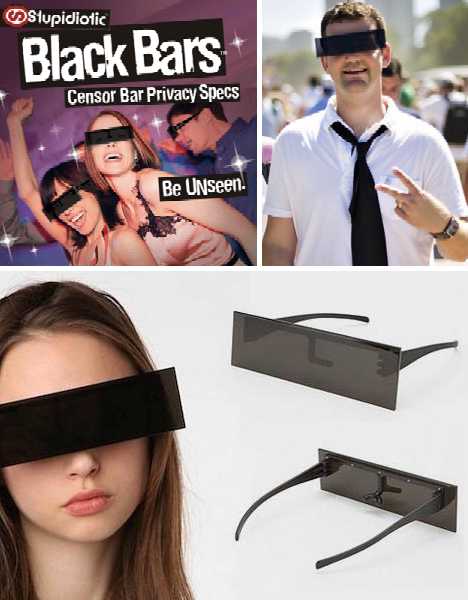 (images via: Stupididiotic and StuffToTweet)

What was unseen, cannot be seen… or something like that. Seize your very own day of infamy with Black Bars, the censor bar privacy specs (dis)approved by paparazzi everywhere. 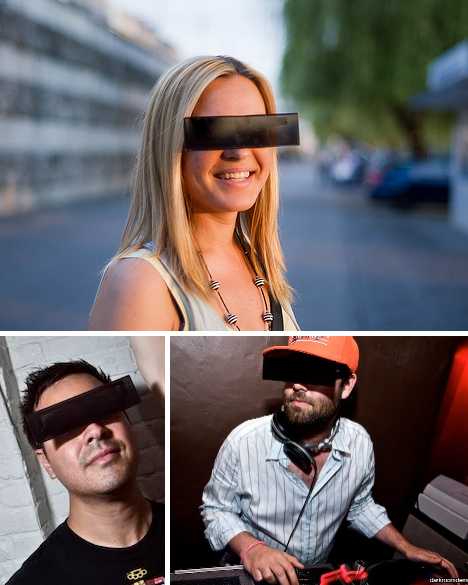 (images via: Art-Of-Noise and I Hate Your Fashion)

Stupididiotic Black Bars (that’s their name, not our judgement) will, in the words of the ad copy, make you “immediately popular with the “IN” crowd” and are “great for webcams and MySpace photos”… not to mention, they coordinate perfectly with a Three Wolf Moon t-shirt. 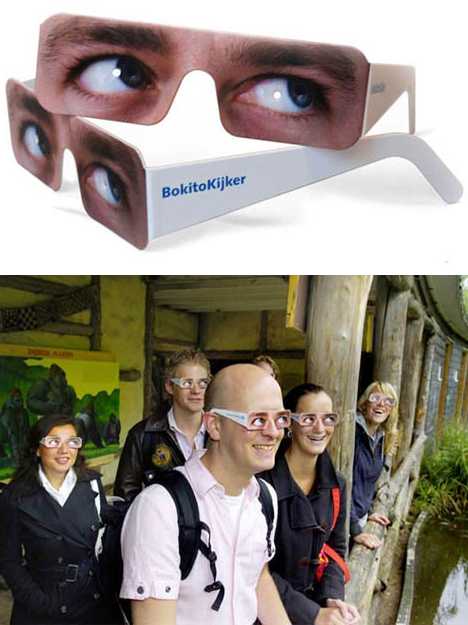 “BokitoKijker” glasses can’t be bought; they’re free with your paid admission to the Rotterdam Zoo’s gorilla exhibit. It seems that the great apes get anxious, annoyed and angry when rude humans stare directly at them… and they respond by jumping over the wall and attacking the tactless onlookers. OK, only ONE gorilla (a silverback named Bokito) attacked a visitor but that was more than enough to get the point across. 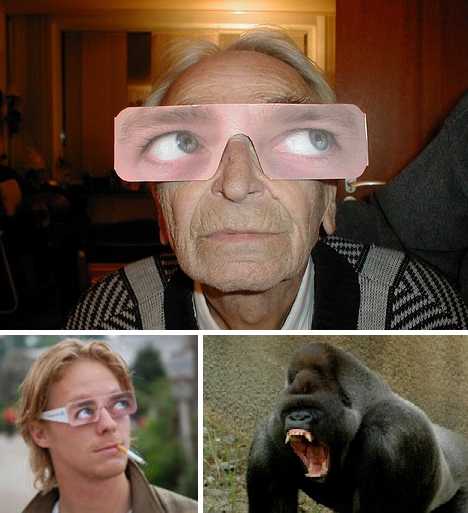 (images via: Urkobold and Circus No Spin)

The glasses are designed not to offend the gorillas, while still allowing humans to gawk at their leisure without the fear of sudden onset ape attack syndrome – SOAAS, for short. Perhaps they should distribute them to the gorillas as well so everyone involved can just chill out. 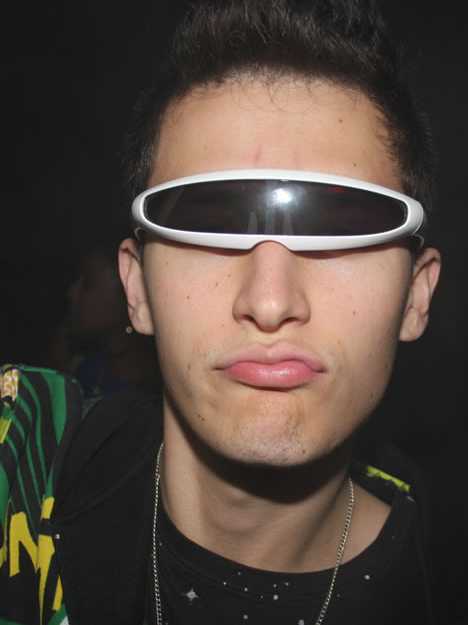 (image via: I Hate Your Fashion)

Back in the day, folks imagined a future where men shaved their heads and wore strange, inscrutable, single-lensed sunglasses. Now that the world of tomorrow is here today, men do indeed depiliate their noggins. Those psycho hipster shades, on the other hand, just didn’t pan out… and someone forgot to tell the dude above. 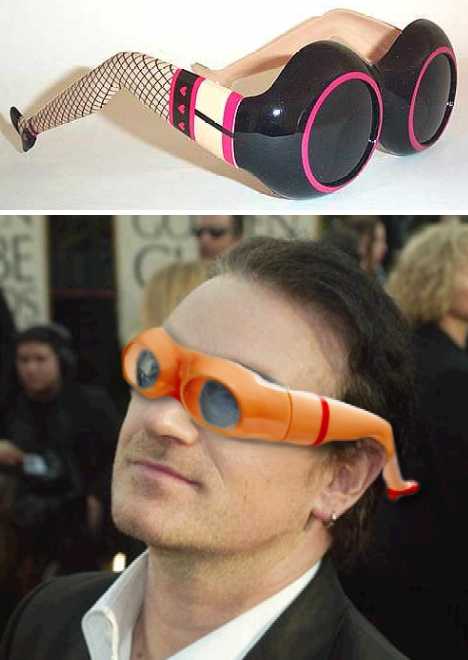 (images via: Goggles and Glasses and Freaking News)

Sexy Legs Sunglasses are said to be inspired by the Can Can Girls of Paris. Funny, I never noticed any of the Can Can Girls wearing glasses but then, I didn’t notice if they have eyes. In any case, these novelty shades are ideal for parties where you want to get a leg (or two) up on your fellow partygoers… or just want to look like Bono. 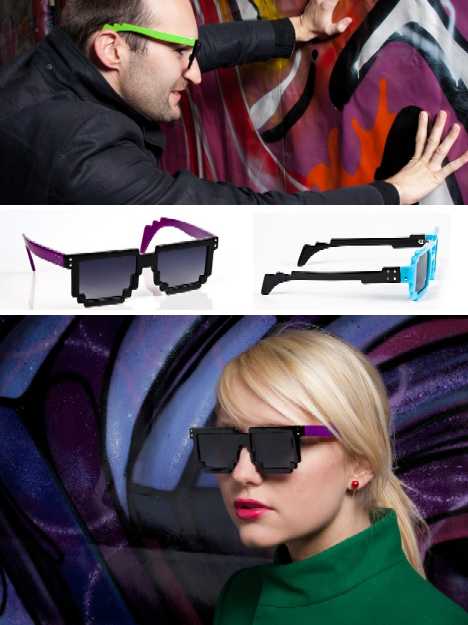 I see your 20/20 vision and I raise you… eight bit frames! Inspired by the early days of video arcade games and the primitive digital imagery of our misspent youth, Dzmitry Samal‘s pixel frames add a dash of nostalgia to any eyeglass-wearing experience. That’s Dzmitry himself above top, doing some self-promotion. 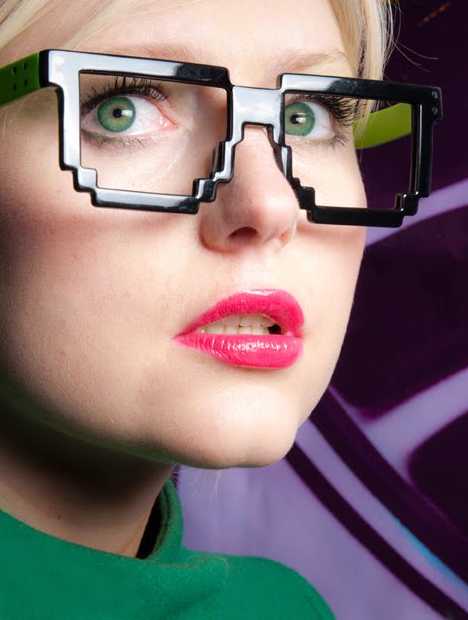 Samal’s choice of contrasting colors for the lens holders and earpieces serves to enhance the retro look. Pixel frames can be used with prescription clear or color-changing lenses, tinted lenses for sunglasses, or just wear the empty frames if you don’t actually need eyeglasses and are only out to make a fashion statement. 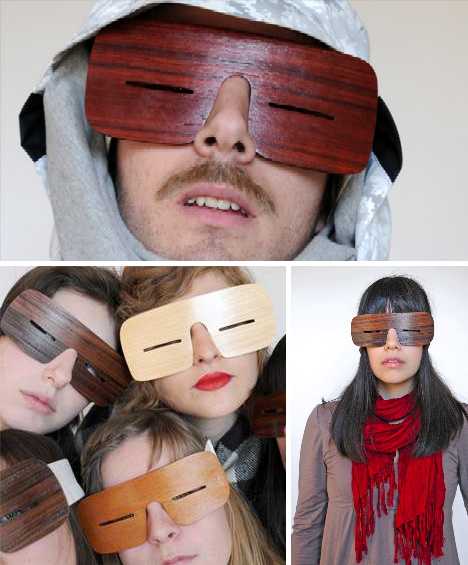 (images via: StyleKandi, Trendhunter and NNSL)

When you’re trudging across the permafrost and need to watch out where the huskies go, do what the Inuit do: whip out your trusty pair of Slanties! 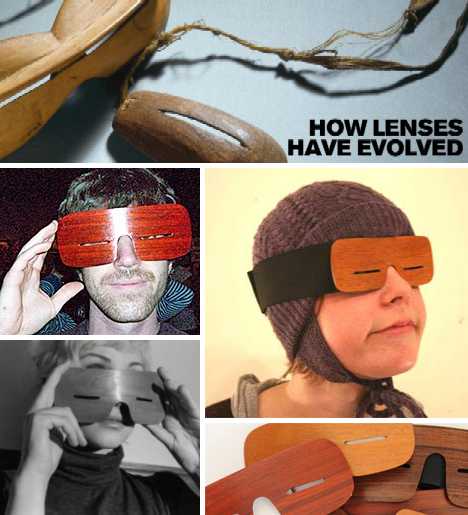 This ancient, tundra-tested sunlight dimmer amounted to a technological breakthrough north of 60 so it’s sad that the no-nonsense design of Slanties (a questionable term, btw) has lately been co-opted by hipsters. The modern version is reinforced with fiberglass to ensure they won’t snap, shatter or splinter (ouch!) on your next PBR run. 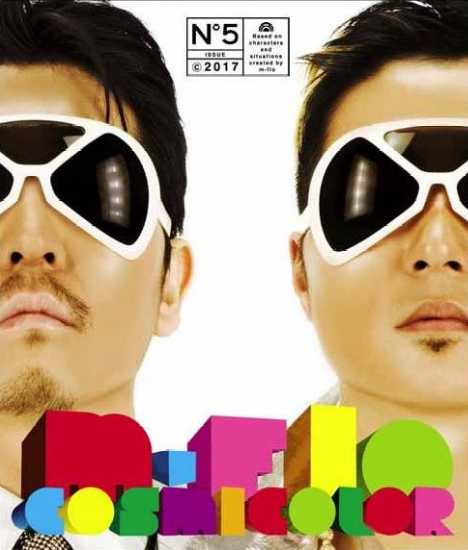 Sick and tired of those “Hey four-eyes!” taunts? Cut ’em down to size by wearing a pair of Silhouette Futura 570 shades. This rare tour de force of 1970s design provides the ultimate in UV eye protection, which is saying something since “UV eye protection” wasn’t on anyone’s agenda 40-odd years ago. 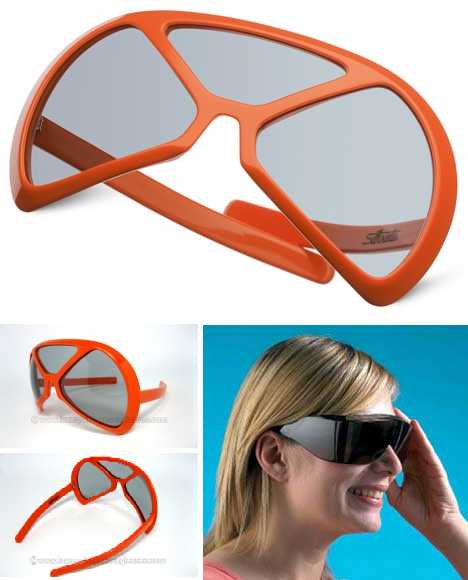 (images via: Silhouette, Luxury Vintage Sunglasses and Adventures and Ramblings) 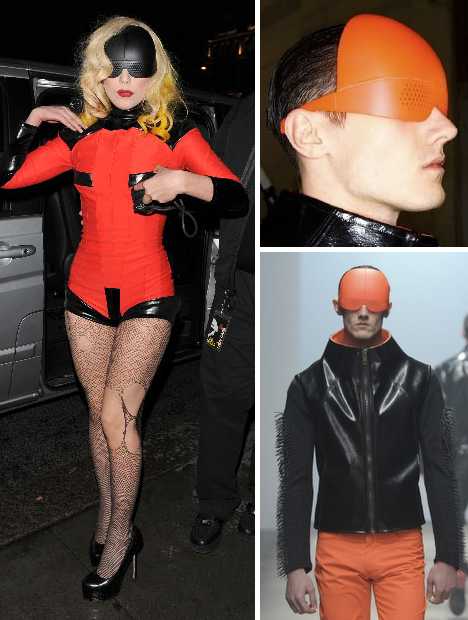 Inspired by the late Soviet cosmonaut and space pioneer Yuri Gagarin, Mykita Eyewear’s “YURI” Sunglasses were designed by Romain Kremer to protect the wearer… from alien attack, perhaps? If you’re not convinced these sunglasses are weird, look who’s wearing them: yep, Lady Gaga (again). Now you too can emulate the newsworthy pop star or look like an interplanetary insect queen, or both! 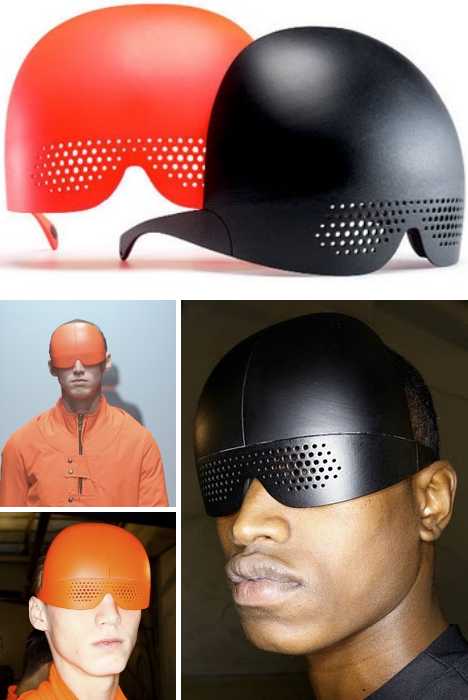 When asked the reason for the unusual styling, Romain Kremer explained the sunglasses are “made to protect the 3rd eye and the brain, reinforcing the idea of a new type of man, with a sci-fi warrior touch.” Alrighty then! The ultra-oversized frames come in your choice of black or red-orange, and they’re a limited edition item so you’d best order early and often. 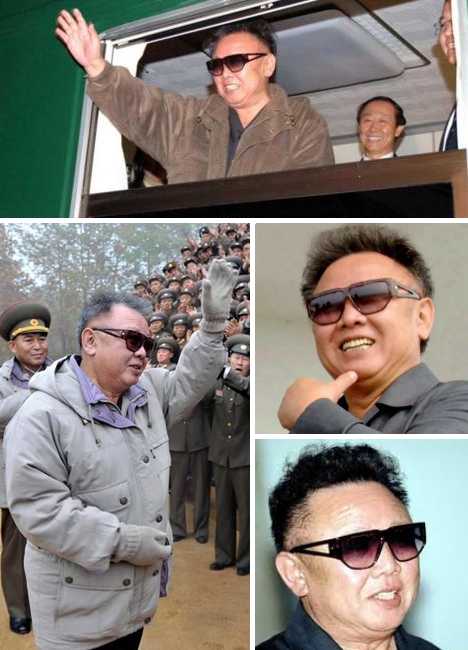 (images via: Louis Marino and Zone7style)

The late and lamented (in his country) Kim Jong-Il was North Korea’s “Dear Leader”; was it asking too much for him to be a fashion leader as well? KJ wore a variety of prescription eyeglasses and sunglasses but his favorites appear to have been a pair of vintage Courreges Sunglasses straight outta the Eighties. 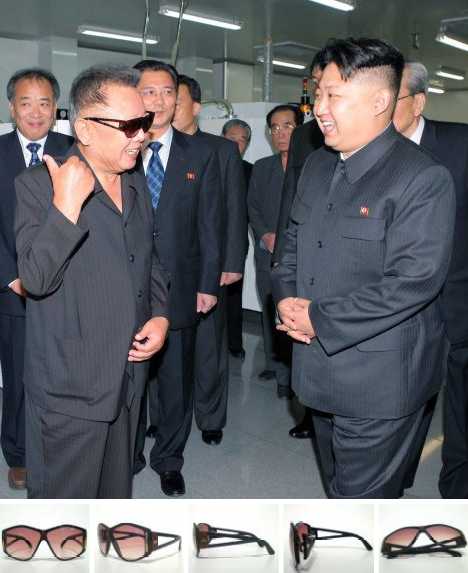 Kim Jong-Il left North Korea to his son but, more importantly, did he leave him his outsized shades as well? Kim Jong-Un has yet to be spied sporting any eyewear but as the weather warms he may find the Courreges to try on a pair. Junior had best be advised, however, that should a new pair (or pairs) be required, he’ll find them priced at €445.00 each at Linde Gallery’s Women’s Wear page… ooh, awkward.