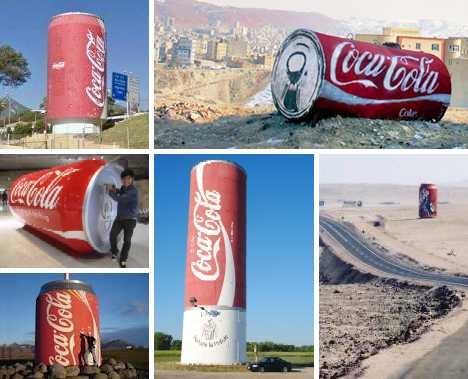 If things really go better with Coke, then the bigger the better! These 10 international giant Coca-Cola cans prove size does matter, both in the big world of globalized advertising and the ever smaller world of disposable consumer culture. 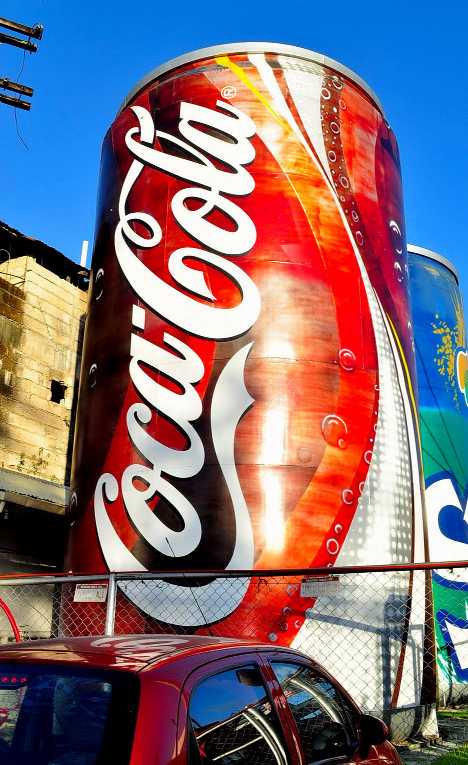 2012 is a big year for Coca-Cola in the Philippines as the company is celebrating its 100th year in the country. Appropriately, just outside the Coca-Cola Bottlers Philippines, Inc.’s branch in Tagbilaran City, Bohol stand a matching pair of giant cans: a Coke and a Sprite. Now that’s one way to establish a presence! 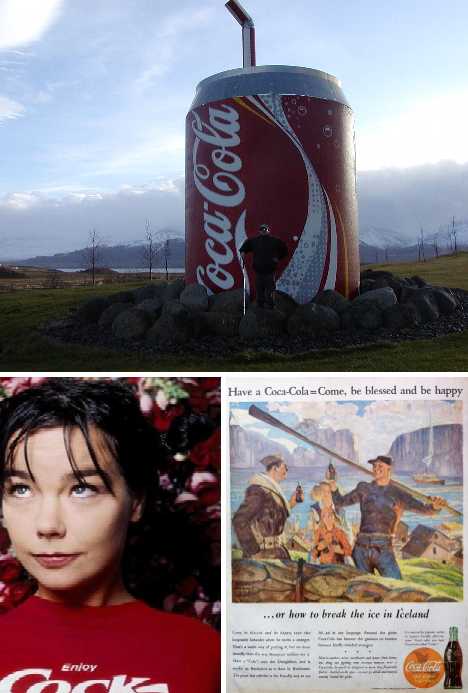 (images via: Tony the Traveller, No, Beezy and Lemurinn)

“Icelanders drink more Coca-Cola per head of population than any other country in the world!”, which might explain the enormous Coke can situated all alone in the midst of some awesome Icelandic scenery. Then again, it might not: Iceland gave the world Björk and we’re still waiting for some sort of explanation. 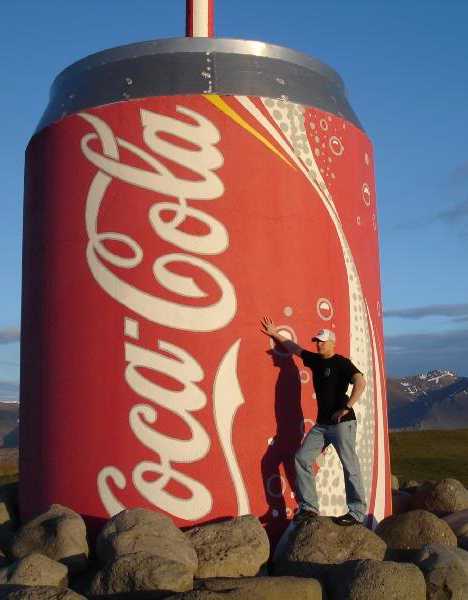 The giant Coke can appears to only attract tourists – Icelanders seems to have tuned it out entirely for reasons known only to themselves. How could Coca-Cola make more of a splash in the land of geysers? We’re not exactly sure but it would probably have to involve the use of giant Mentos. 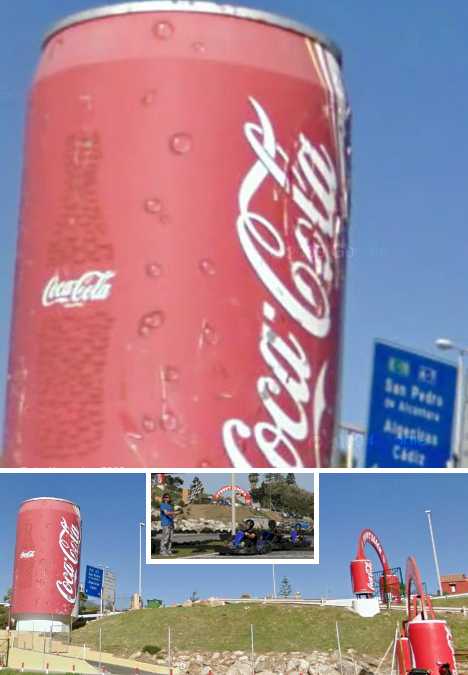 The 1,300 km (800 mile) long Autovía del Mediterráneo (or Autovía A-7) snakes down Spain’s southern and eastern seacoast from La Jonquera near Barcelona to Algeciras. At one point near Marbella on the Costa del Sol in Andalucia, you’ll find the Funny Beach amusement park and go kart track, and that’s where you’ll also find a very large, very sun-bleached Coca-Cola can. 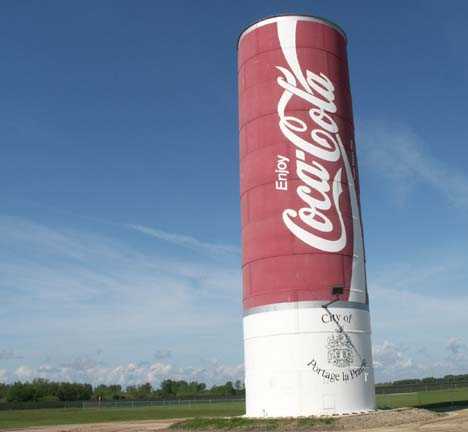 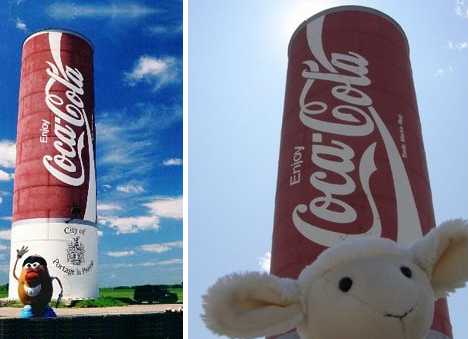 Formerly a water tower, the “World’s Largest Coke Can” in Portage-la-Prairie, Manitoba can be seen for miles around – the area’s generally flat prairie topography being a big help in that matter. If it’s after dark or a foggy day, you can find it off Saskatchewan Avenue West between the Canadian Tire store and the Canad Inns hotel. Now how Canadian is that? 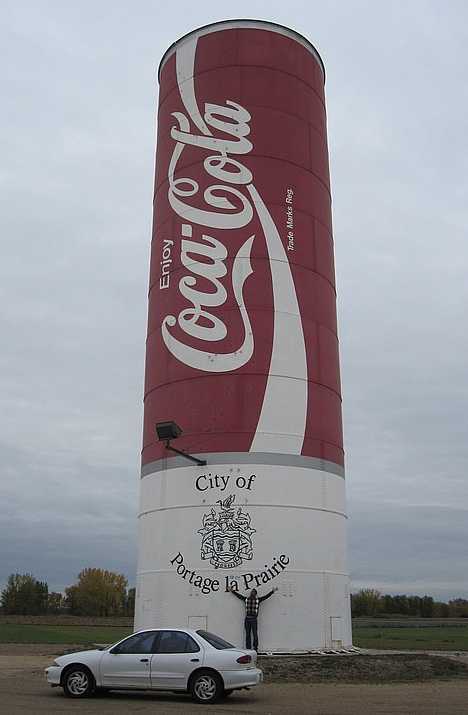 (image via: Paint a Lifestyle)

Coke cans large or small are paid advertisements and if Coca-Cola won’t pony up the cash, a giant Coke can can change its stripes faster than a ninja zebra in heat… a horse of a different cola, one might say. Such is the case with the Portage-la-Prairie Coke can: it’s due for a paint touch-up but Coca-Cola’s unwilling to pay for the paint and supplies. 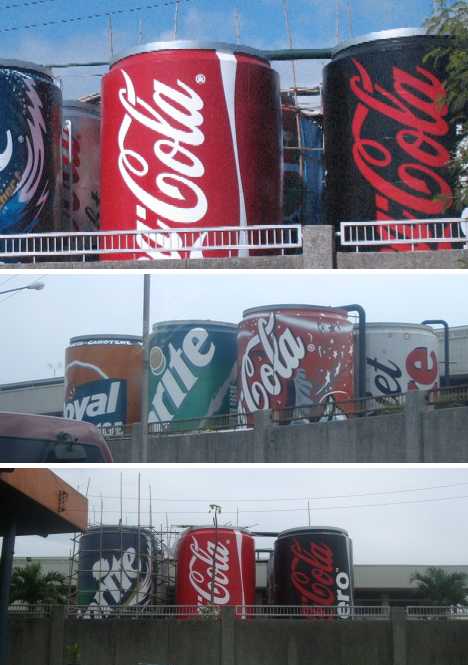 The largest Coca-Cola Company bottling plant in the Philippines can be found in the city of Santa Rosa just south of Metro Manila. Where do you think they keep the cola before it hits the bottles? You guessed it: giant storage tanks painted to resemble the company’s more notable products. The tanks are repainted from time to time to better reflect Coke’s current canned soft drink offerings. 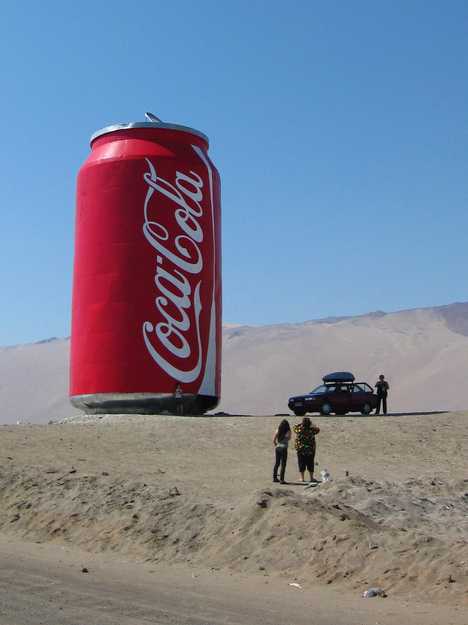 Friendly reminder, cruel mockery or merely a mirage? Looming out of the parched sands near Iquique, Chile, is a massively huge can of Coca-Cola standing 25m (82 ft) tall! Considering it’s generally accepted that the Atacama Desert is the driest desert in the world, Coke’s jumbo-sized product placement is nothing if not inspired. 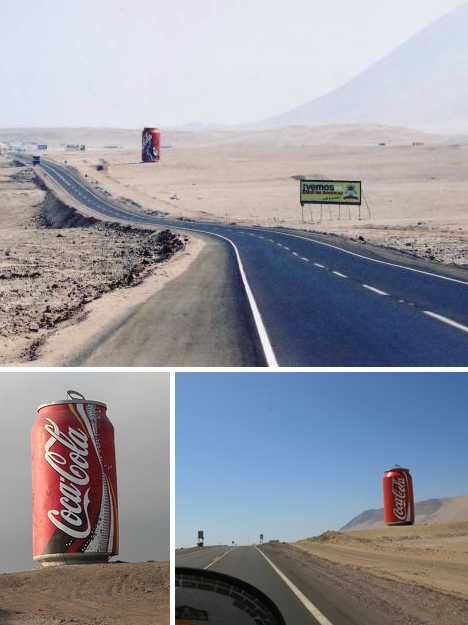 International travelers to and from Iquique can’t miss seeing this huge Coke can as it sits just off the highway connecting the city with its airport. It’s likely the bright red can also functions as an accidental beacon for pilots suffering a spate of sand-blindness on their final approach. 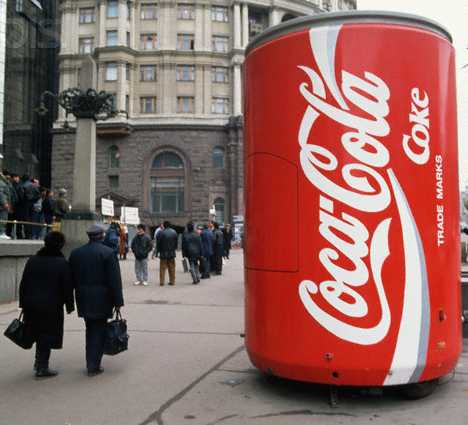 This somewhat surreal Moscow street scene was photographed on March 28th, 1993 by Peter Turnley. Things were not going well in newly post-Soviet Russia at that time, as “shock therapy” reform policies developed by Western economists had devastated the economy and destroyed the life savings of millions. The people were not amused: just two days before this photo was taken, Russian President Boris Yeltsin escaped impeachment by a mere 72 votes. It’s enough to drive a man to drink! 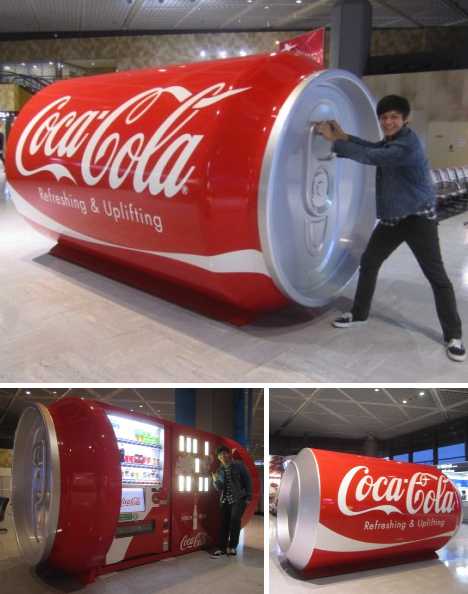 “Refreshing and Uplifting”? Try some of the latter on what must be the world’s largest indoor Coke can and you’re looking at the world’s most painful hernia. This jumbo can is all advert on one side and a fully functioning Coke machine on the other. 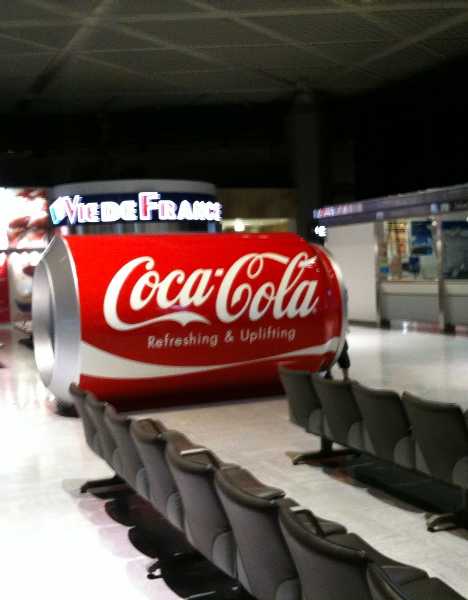 You’ll find the combo can at Narita Airport in Japan, a nation not known for harboring large, space-hogging extravagances in its precisely planned indoor spaces. It’s also anything but your average iconic Coke machine. Being installed in the vicinity of airplanes, what kind of Coke machine is it? Oh, it’s a big pretty red can with white stripes, flashing lights, and it looks like a big Tylenol.

Giant Coke Can from the New York Set of “Cats” 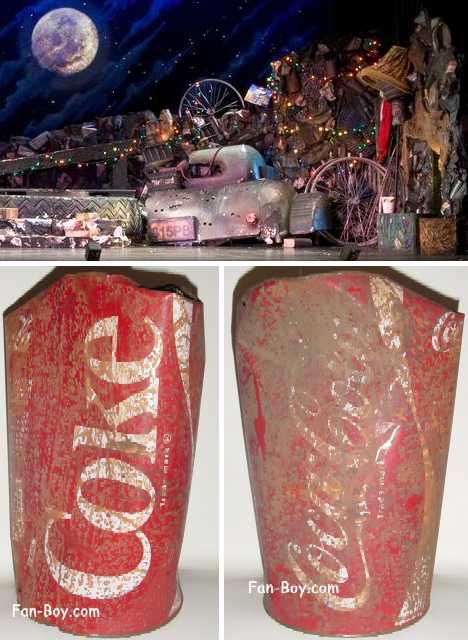 (images via: FCLO and Fan-Boy)

Who let the cat out of the… can? This giant Coke can comes from the New York set of the popular musical theater production of Cats. It’s a prop, of course, though whether Coca-Cola paid for this particular piece of product placement is unknown or at least, they’re not saying. Cats got their tongues? 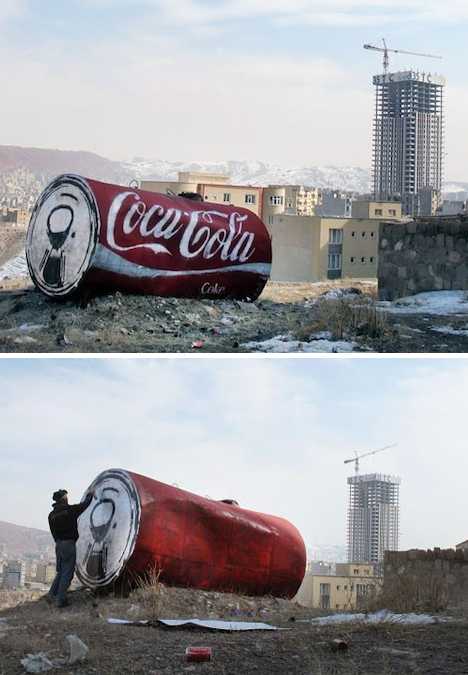 (images via: My Modern Met)

Want to live dangerously? Try being a street artist in Iran. Icy and Sot are Iranian brothers mainly known for Banksy-style illustrated stenciled statements such as “Beer is not a crime”, which in the eyes of most local Mullahs IS a crime on a variety of levels. Then there’s the larger-than-life Coke can shown above, something President Mahmoud Ahmadinejad would sorta not want since he banned sales of Coca-Cola in Iran. 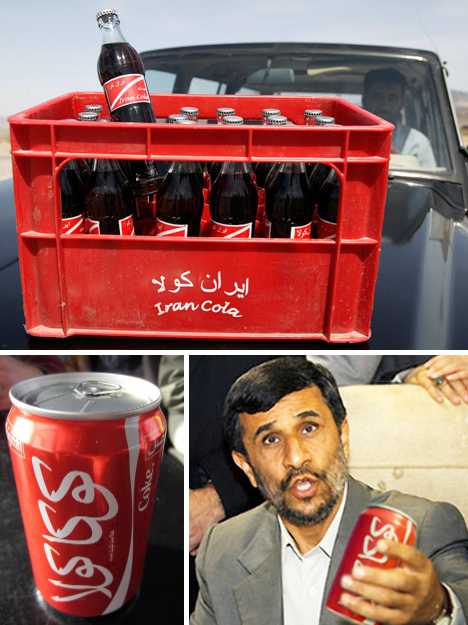 (images via: StreetArt.com, TravelPod and RT.com)

Adapted from an abandoned and fortuitously shaped storage tank located in the gritty hills overlooking Tabriz, the can is meant to symbolize the sad state of the environment in Iran. “Empty Coke cans are everywhere,” explained one of the brothers in an interview with BLOUIN ARTINFO France, “a giant one would emphasize that fact.” 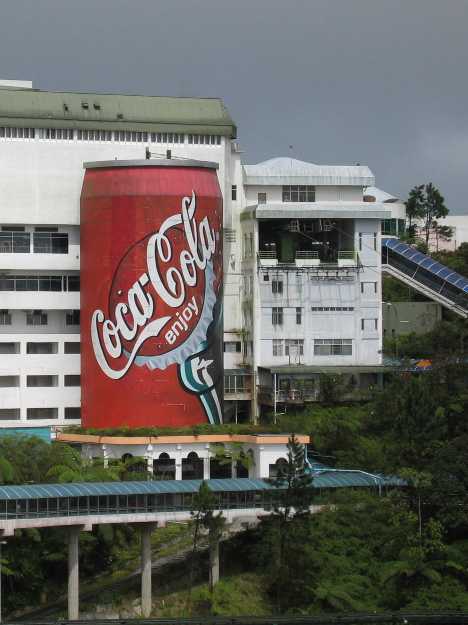 Coke: not just the real thing, sometimes it’s the real BIG thing. Oversized Coca-Cola can advertising is a serendipitous example of a ready-for-sale product (or representation thereof) acting as its own advertisement. No extra signage, no superfluous messaging, no creative framing required – just the product, blown up for maximum visual effect. “Can” you imagine that?