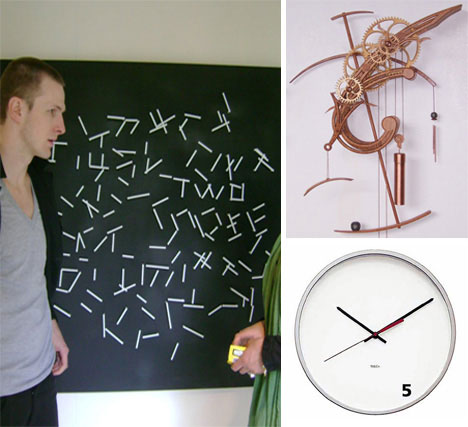 We are governed by it. We never seem to have enough of it. We have even grown accustomed to having an item of furniture that precisely reminds us of it (and, more recently, having it strapped to our arms). Our love affair with clocks isn’t set to end soon – especially when we are really starting to play with the creative possibilities, as these 24 examples illustrate.

Marketed as the first clock that appreciates how people really tell the time (although there are others featured below), the It’s About Time clock rounds up or down in a pleasantly woolly manner. 12.34? Surely you mean it’s Just Gone 12, then? We look forward to week and month versions. 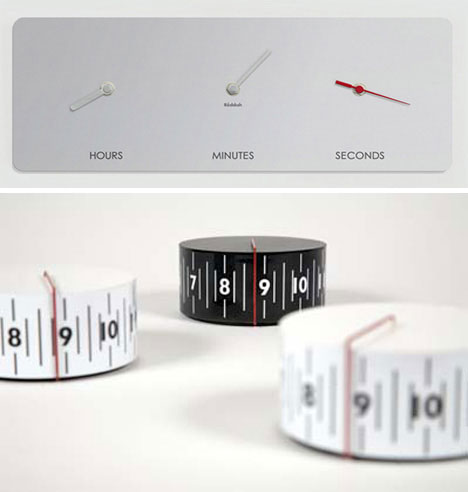 The Just A Moment clock gambles that we are so used to reading the hands of clocks that we know, without consulting numbers, what they should be pointing towards. (In designer Fluke Collective’s words, it “forces us to reconsider the familiar angular relationships”). The Around About clock similarly requires a little interpretation, with the twist that it revolves once every 24 hours and its single hand stays still. 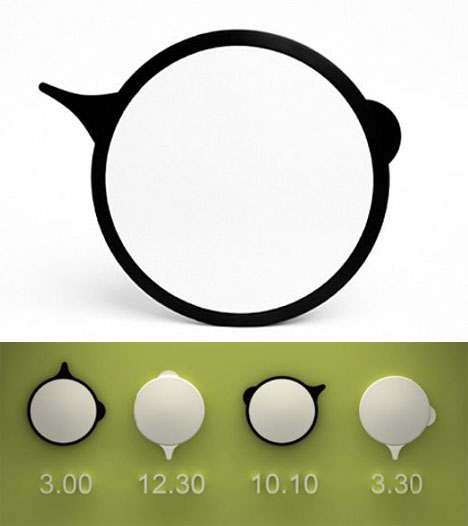 The Rim clock is another that sacrifices precision for style. Each of its “hand” protrusions points outwards in the familiar hour- and second-hand configuration – and that’s it. You’ll have to work hard to find a more minimalist item of furniture for your home. 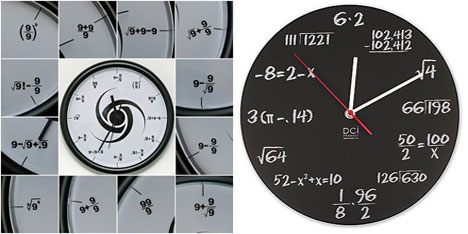 (Images via: Leo Reynolds and Techeblog)

If you think you’d have problems reading the previous clocks in a hurry, you’ll be absolutely scuppered by these examples…unless you’re a mathmatical genius. If you’re a member of the Triple Nine Society you’d probably qualify, in which case, their clock would be practical as well as pleasantly quirky. The Math Clock looks like its numbers are chalked on, and we hope so because surely it wouldn’t take long for memory to replace reasoning, and that would ruin its intended function..which is to keep a few people intellectually limber, and baffle the rest of us. 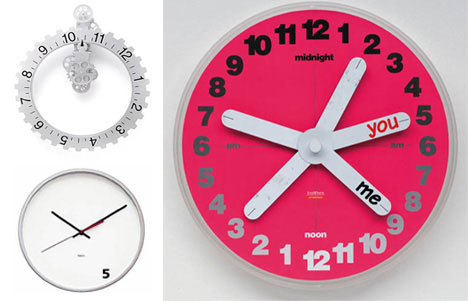 (Images via: The Green Head and Zwello)

Get a sense of the world turning under you with the Gear Clock – again, not so accurate, but certainly impressive and eyecatchingly neo-industrial. The Five O’Clock clock, on the other hand, doesn’t much care about any other time other than the end of the working day. It encourages clockwatching. Bound to be a hit with frustrated Dilberts everywhere (but it’s bosses that usually have the last word with furniture). The KnoWhere You And Me clock aims at a different consumer base: timezone-crossed friends or lovers. 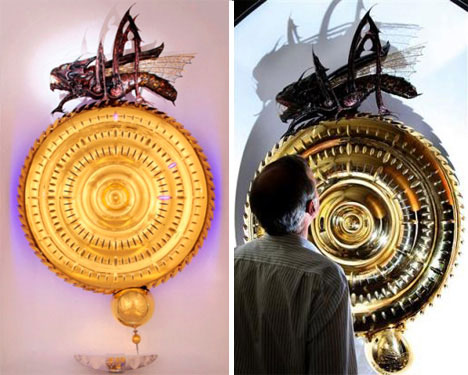 This is a bizarre timepiece, everyone agrees. Over $2 million to make during seven years of hard work, the Corpus clock is the brainchild of A Brief History Of Time author Professor Stephen Hawking. You’d expect something a little more celestial – but instead, a hideous creature (a “Chronophage” or time-eater) stalks the rim, devouring minutes and seconds, and instead of hands pointing out the time a series of slits inset in the 24-carat gold face of the clock light up accordingly. 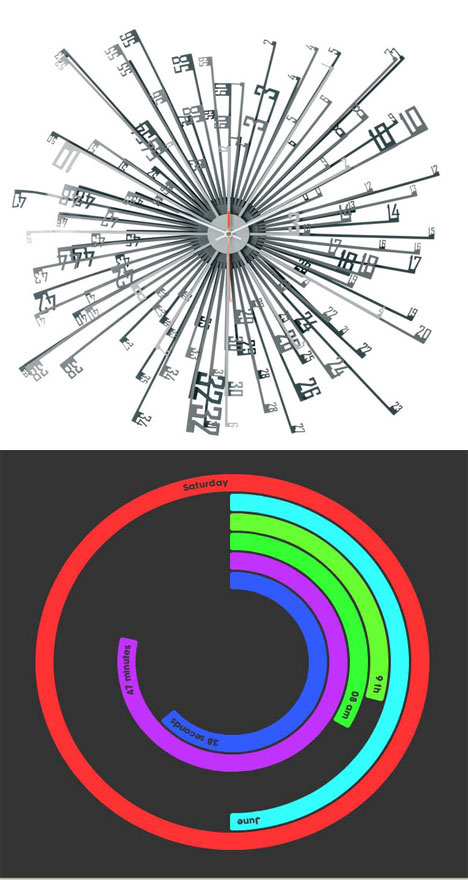 Straying but a little way from our obsession with a circular, clockwise face are these two examples. The TikTak looks frozen in the act of exploding off your wall, and its numbers are of different sizes flung out on the end of stalks. The virtual Polar clock is a concentric sweep of seamless arcs, moving quickest on the outer rim and imperceptably on the inner. You can fully tailor it to your own preferences before you set it as the screensaver of your PC or Mac (get it free here). 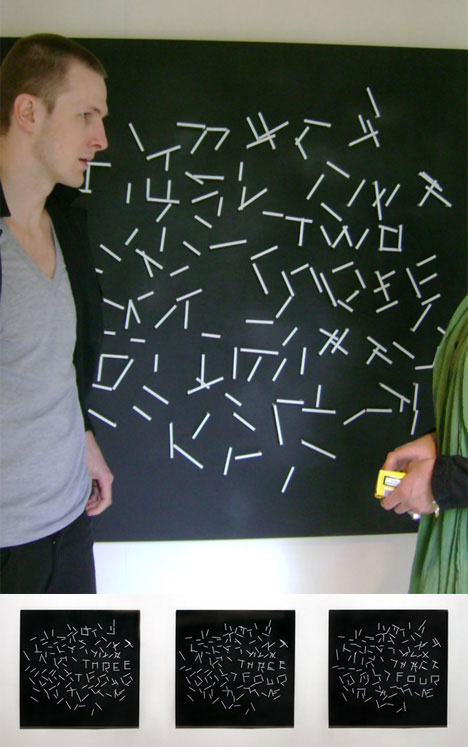 (Images via: Christiaan Postma and cloudberrynine)

The Word clock isn’t interested in numbers themselves, only the words behind them. The 150+ pegs rotate seemingly randomly until numbers magically start spelling themselves out, clockwise of course. It’s a real-world clock, but you can see an online demonstration at Technabob. 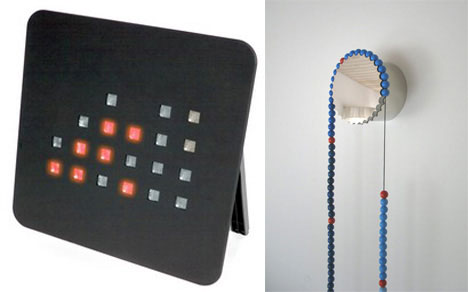 (Images via: Firebox and Thorunn Design)

These examples are nothing like any clock you have ever seen. The Binary clock uses principles you can see explained with this online clock – and requires a level of familiarity with computers approaching that of a character from The Matrix. And the Bead Clock? It all starts making sense when you realise that every blue bead is 5 minutes, and every red bead is an hour… 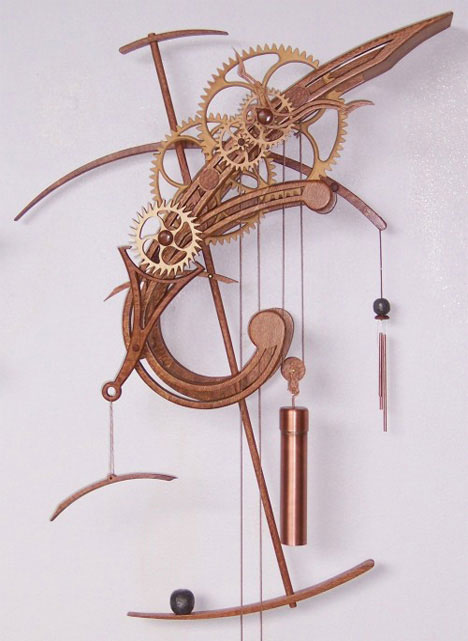 Reminiscent of one of Leonardo da Vinci’s exquisitve drawings, the Nautilus clock is just one of a range from designer Clayton Boyer (you can see the rest here). You will be relieved to know that all these clocks come with exaustive assembly instructions, and it won’t be long before you have your own fully wooden machine to marvel at. 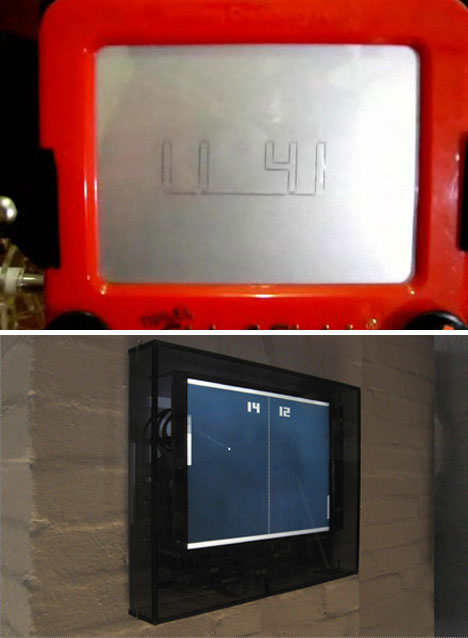 (Images via: Engadget and Buro Vormkrijgers)

Instantly recognizable and guaranteed to cast minds back to happier childood days, Etch A Sketch and Pong have pride of place in the pantheon of yesteryear entertainment. So it’s a brilliantly clever move to work them into a clock design. The Etch a Sketch clock is very much the prototype, but a highly impressive one (follow the link above to Engadget to see it in action) – and the hypnotic Pong clock is newly available to be bought online. 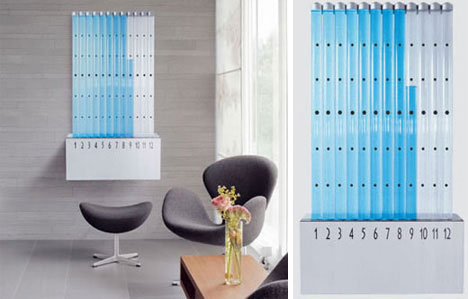 This Water clock from Chronarte is called Canna, and each hour is a steadily filling tube in series moving left to right, lending your day a sense of progress and momentum. It is one of the oldest time-keeping traditions in the world brought bang up to date (and with a hint of the histogram about it, it should fit right in with modern business decor). 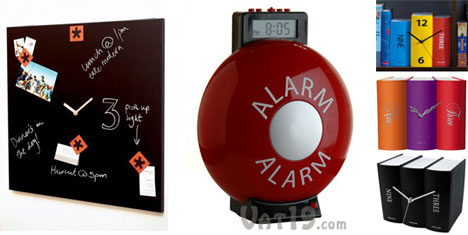 Finally, clocks pretending to be something else. The Time Square clock tailors itself to your day, letting you highlight the most important appointments and scrawl reminders to yourself in chalk.  Vat19’s Alarm clock seems better-qualified for its title than any other: it’s unlikely you will ever sleep through this one.  And the Table Clock Book dispenses altogether with the need for a wall (except for leaning a bookcase against)!