While fully subterranean homes can feel like grim bunkers, homes built partially into hills, cliffs and bluffs peek out from underground through glassy ‘eyes’ to gain daylight access and views of their surroundings. These covert residences are naturally camouflaged from several angles, blending into the landscape while still enjoying sun-dappled swimming pools, terraces and courtyards. 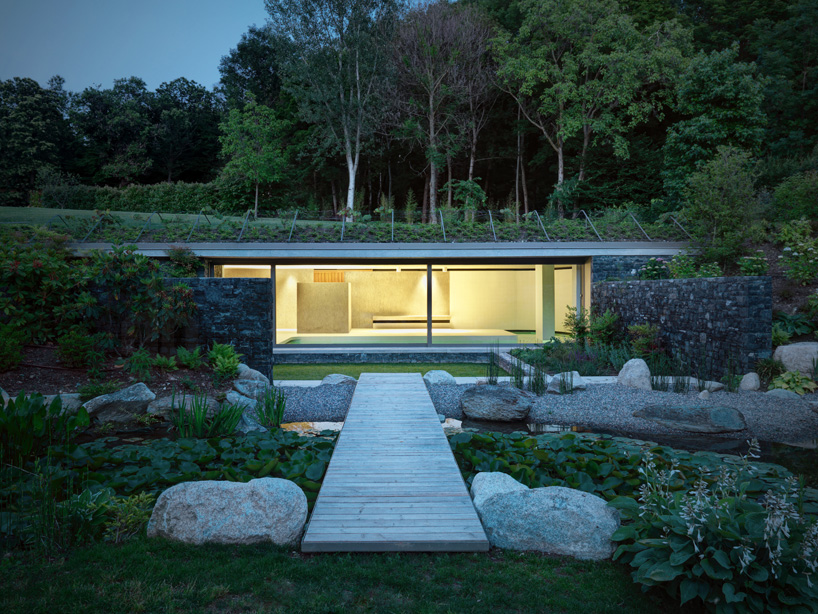 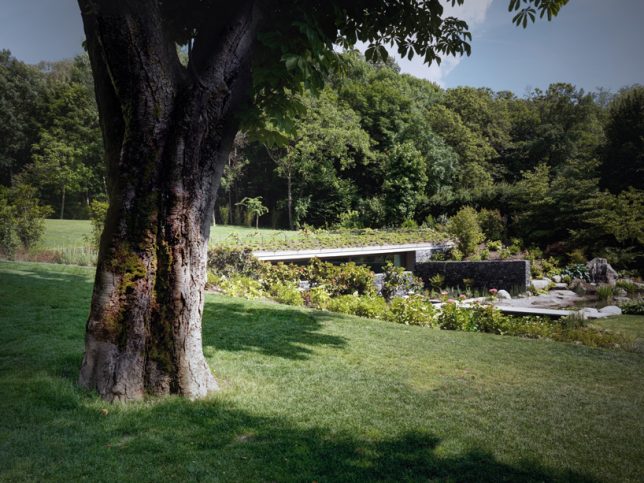 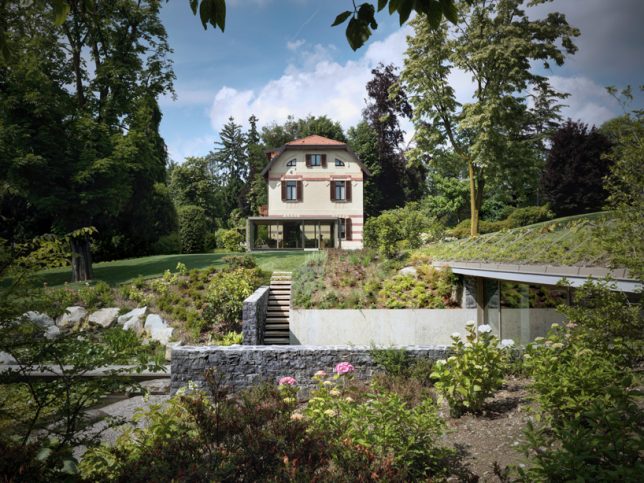 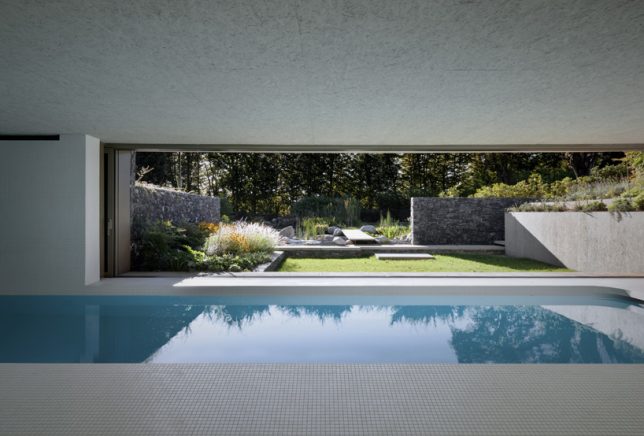 An addition to a traditional home in Northern Italy sits beneath the surface in the backyard, disguised by a green roof, with its ample glazing looking out onto an artificial pond. Local architecture firm Act Romegialli connected the new wing of the home to the original structure with an underground tunnel and placed an indoor swimming pool and gym inside the addition. 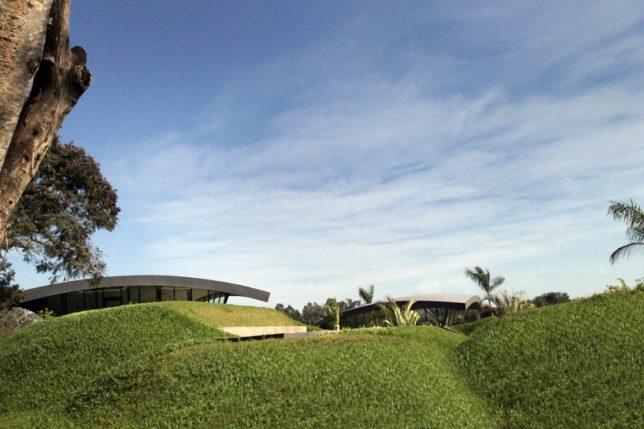 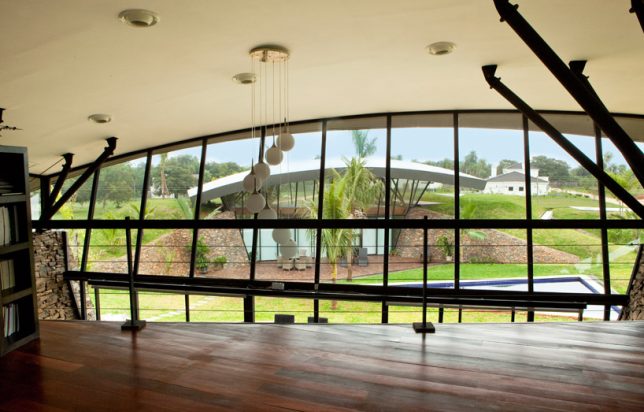 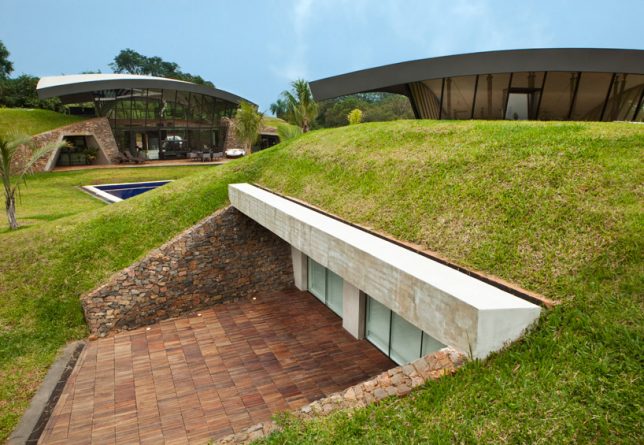 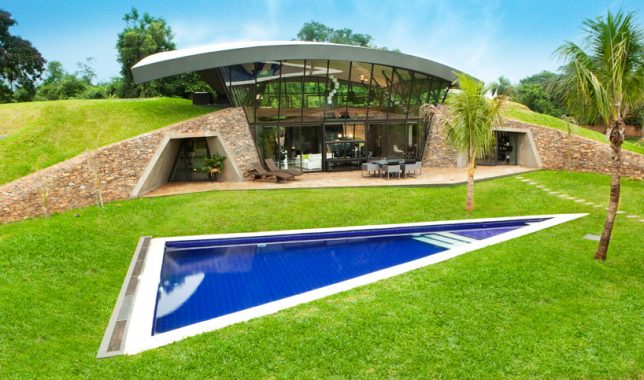 Twin arcs protrude above grassy hills concealing the bulk of ‘two single-family homes’ by Paraguayan firm Bauen. The architects terra-formed the artificial hills and filled in voids between them with triple-height glass enclosures. Both of the luxurious homes look out onto a shared swimming pool. The roofs of the homes mirror the shape of the hills, and from afar, they’re barely visible. 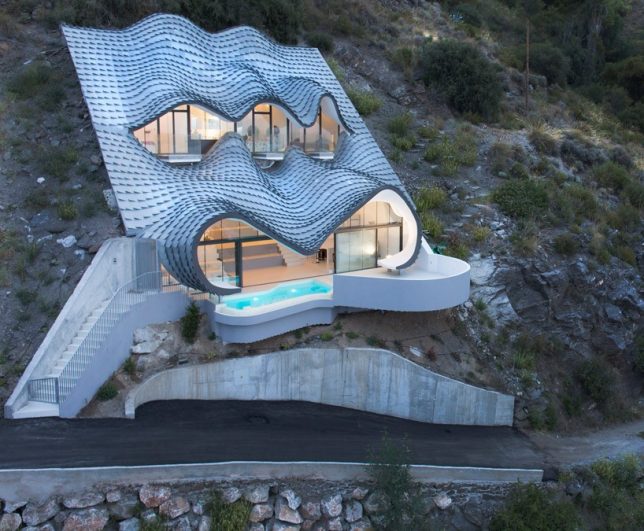 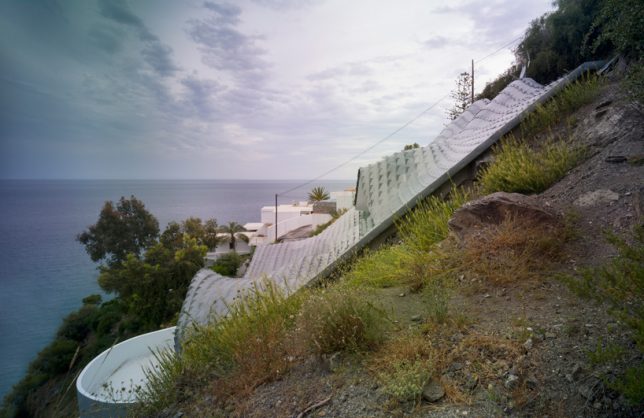 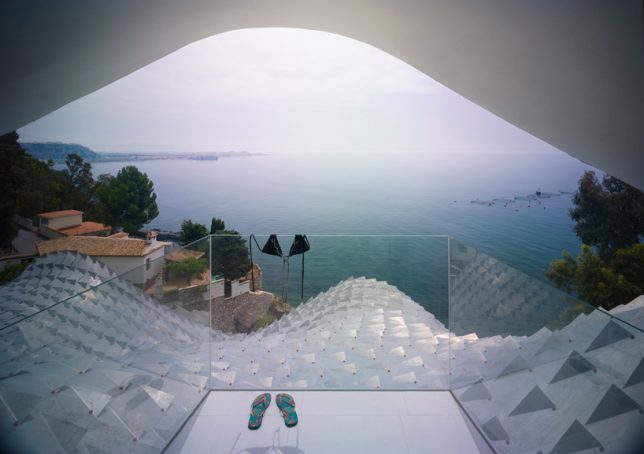 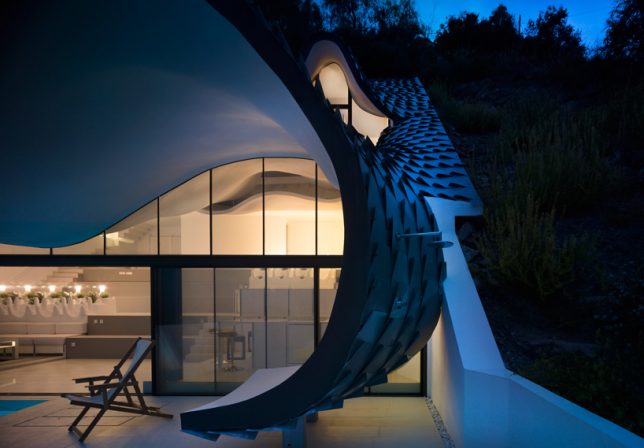 ‘Dragon House’ by Gilbartolomé Architects takes a challenging site and transforms it into something truly spectacular, with a curvilinear tiled roof resembling scales on a reptilian hide. The home itself is built into a cliff overlooking the Mediterranean Sea in Granada, Spain, with three ‘eyes’ leading out onto glass-walled balconies to take in the views. The interior is spread across two levels, and the living room segues into a cantilevered terrace with a swimming pool. 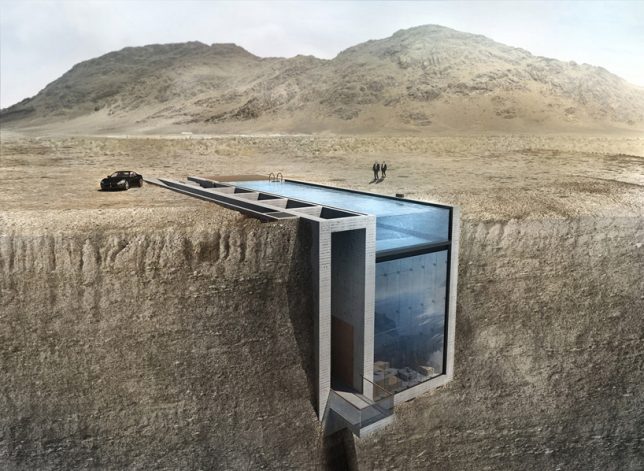 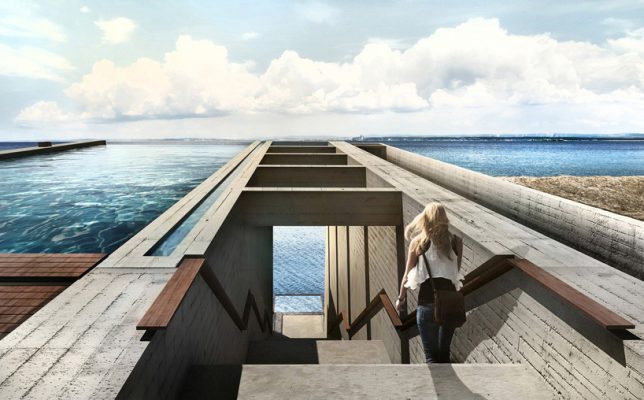 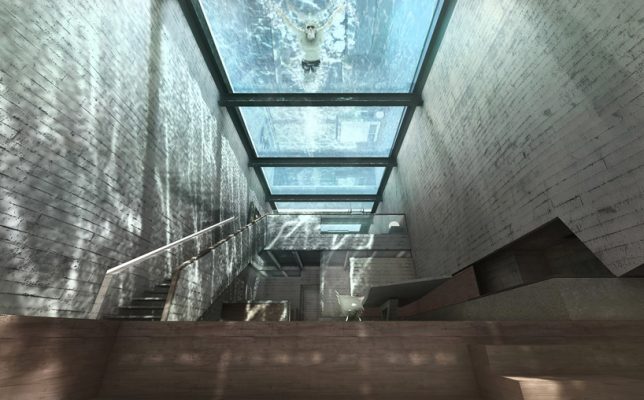 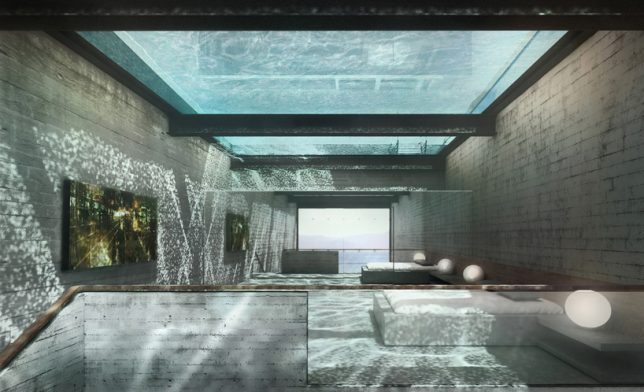 Set to be built into the cliffs of Beirut soon, rather than overlooking a sea as seen in these renderings, Casa Brutale by OPA instantly went viral upon its debut for its dramatic design, with nothing but its swimming pool and stairs visible from surface level. The glass-bottomed pool acts as a giant watery skylight for the entire underground home, which looks out onto the valley from a narrow glazed facade.

Pam and Jenny House by L’escaut 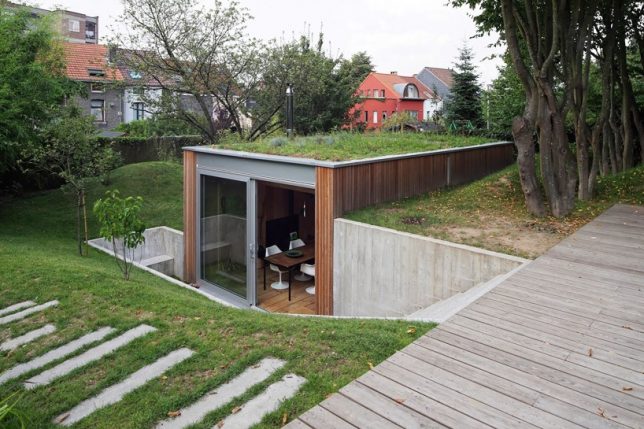 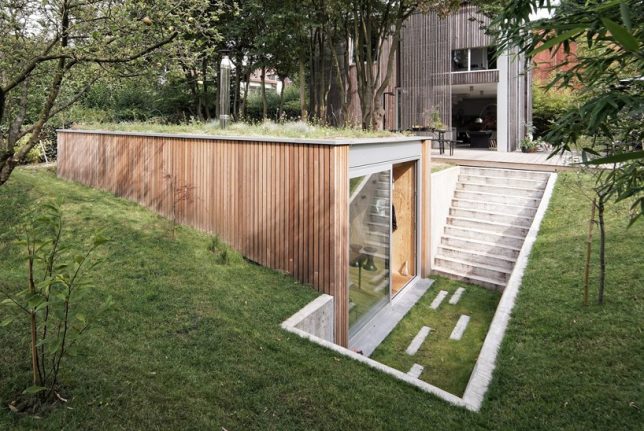 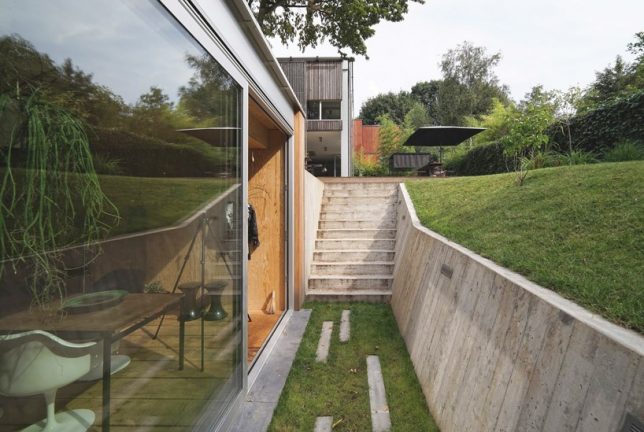 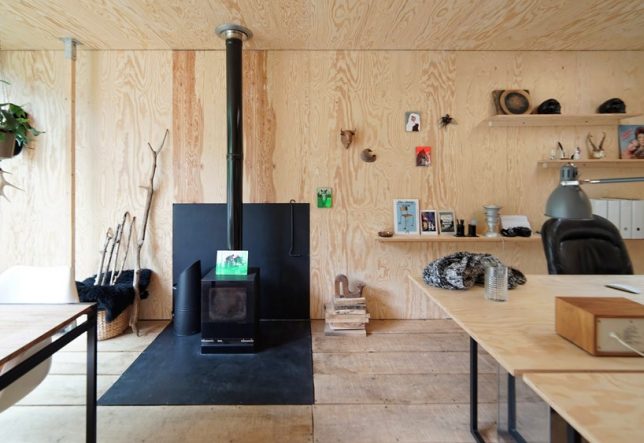 Positioned at waterline height within a garden, the ‘Pam and Jenny House’ by L’escaut is mostly subterranean but peeks out full-height glazing into a recessed courtyard to fill the space with light and make it feel larger. Seen from the main house, this addition looks like no more than a series of grassy plains.