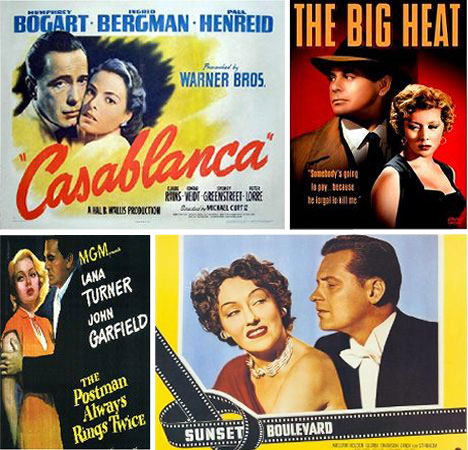 What is Film Noir ? Well basically it’s a cinematic term used to describe a certain type of movie. It’s hard to pin down with absolute precision, because it’s essentially about an instantly recognizable ‘look’ and ‘mood’. The guys were tough but vulnerable, the women were beautiful but flawed, everyone smoked like a chimney and the whole thing was shot in gloomy, brooding black and white. The classic ‘film noir’ period stretched from the early 1940s to the late 1950s although the low-key, black and white visual style of the films had its roots in earlier German expressionist cinema.  Film Noir movies were often crime dramas that explored moral ambiguity and sexual motivation. Many of the typical stories and much of the attitude of classic ‘noir’ derive from the fashion in the USA at the time for ‘tough’ crime fiction, for example Raymond Chandler and Dashiell Hammett. Movie buffs argue endlessly about the ‘best’ Film Noir movies so we won’t stray into that mine-field. Instead lets just remember a few great examples of the genre. 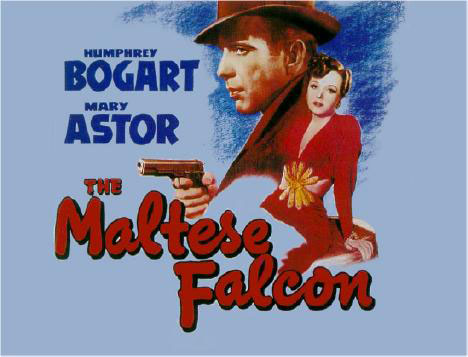 One of the strongest influences on the film noir genre of the 1940s was Americas love-affair with the ‘hard-boiled’ detective of popular fiction. Dashiell Hammett’s private-eye Sam Spade was as tough as they come. Sam, played here with laconic cool by Humphrey Bogart, finds himself hounded by police when his partner is killed whilst tailing a man. The girl who asked him to follow the man turns out not to be who she says she is and is secretly involved in something to do with a mysterious ‘Maltese Falcon’, a gold-encrusted life-sized statue of a falcon. The plot thickens. 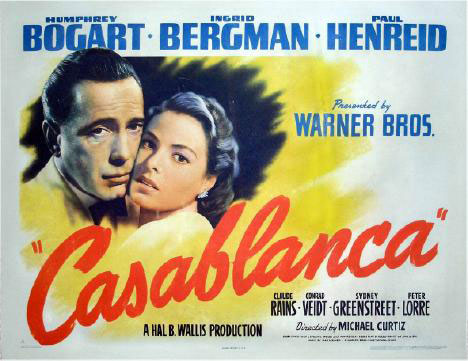 Settings don’t come much more seedy than Casablanca in World War II and Rick Blaine, exiled American and former freedom fighter, is the perfect morally ambiguous noir ‘hero’. Rick (Humphrey Bogart) runs the most popular nightspot in Casablanca. The plot involves Nazis, secret letters, a crooked police chief and, of course, Rick’s lost love Ilsa (Ingrid Bergman) who turns up in his bar one night needing his help. The director, Michael Curtiz, somehow managed to transcend the genre and produce what has become one of the great movie love-stories of all time. 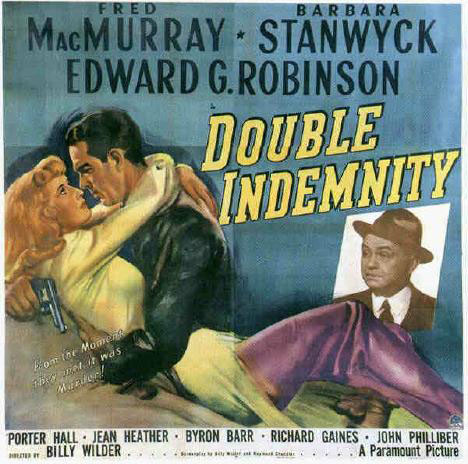 Directed by Billy Wilder and with a tag line of ‘It’s Love And Murder At First Sight’, Double Indemnity contained the characteristic moral uncertainty of the Film Noir genre. Smooth-talking insurance agent Walter Neff (Fred MacMurray) becomes infatuated with Phyllis Dietrichson (Barbara Stanwyck) and agrees to help murder her husband. After she has tricked him into signing a ‘double indemnity’ policy, they kill the husband to make it look like an accident. However, the suspicious insurance company investigates, uncovering shocking facts about the widow. A scheming woman, a weak and gullible man, infatuation, murder and double-cross, this is Film Noir at its cynical best. 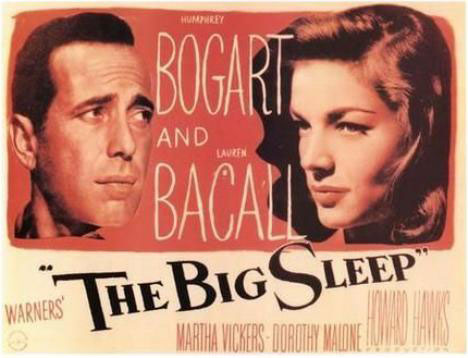 This Howard Hawks movie took Noir star Humphrey Bogart and plugged him straight back into his successful ‘private eye’ persona in a screenplay from a popular Raymond Chandler crime novel. The plot, shockingly for its time, contains homosexuality, gambling, police corruption, sex photos, criminals, scam artists, murder and an unflattering portrait of the very wealthy of Los Angeles. World-weary private-eye Phillip Marlow (Bogart) is a basically decent but flawed man trying to solve a complex series of mysteries and stay alive at the same time. The film is a good example of how the brooding cinematic style and the portrayal of imperfect humanity come together in Film Noir. 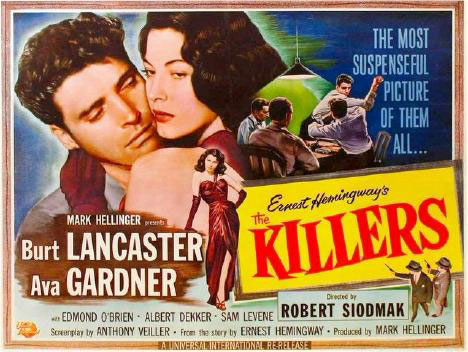 One of the things you can say in favor of movies from this era is that they were often based on good writing, in this case a Hemingway story, unlike so much current cinema where plot and characterization seem to take a back-seat to gimmicks and special effects . In this story the Swede (Burt Lancaster), is an ex-prize fighter who has foolishly gotten mixed up with mobsters and a double-crossing dame and is waiting in his cheap small-town hotel room for two hit-men to find and kill him. Director Robert Siodmak took the original Ernest Hemingway short story as his opening point and cleverly developed it through an elaborate series of flashbacks. Ava Gardner, in an early role, makes an excellent Film Noir ‘femme fatale’. 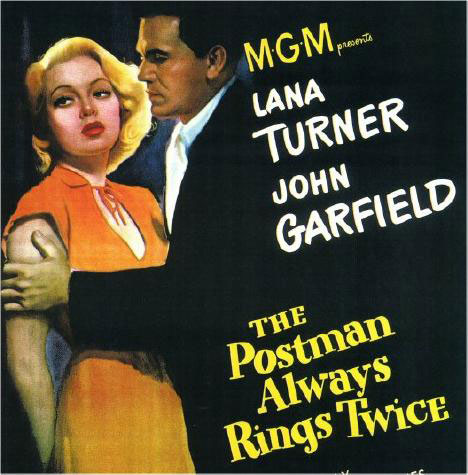 Tainted love, moral weakness, betrayal and murder – you just know it has to be Film Noir. In this classic example of the genre, Nick Smith, the middle-aged proprietor of a roadside restaurant, hires drifter Frank Chambers as a handyman. The drifter eventually begins a steamy affair with Nick’s beautiful wife Cora, who talks Frank into helping her kill Nick, by “accident.” Of course in Film Noir nothing ever goes according to plan and the lovers find their feelings for each other tested and found wanting in unexpected ways. 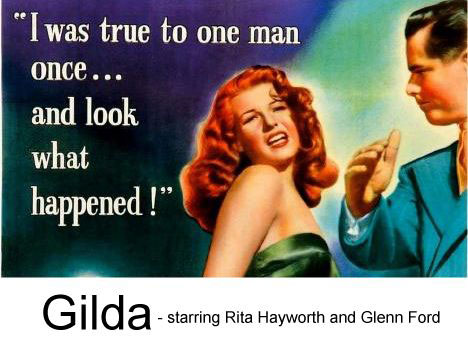 Down in Argentina, small-time crooked gambler Johnny Farrell (Glenn Ford) is saved from a gunman by sinister Ballin Mundson, who later makes Johnny his right-hand man. True to the Film Noir ethos, their friendship is based on a mutual lack of scruples. The relationship heads for the rocks when Mundsons new wife Gilda (Rita Hayworth) appears on the scene. Johnny once knew femme-fatale Gilda and still feels both attraction and hatred towards her. Their relationship is a battlefield of warring emotions that becomes even more explosive after Mundson disappears in mysterious circumstances, leaving Gilda and Farrell free to marry. This incendiary situation finally explodes when the supposed dead-man turns up again looking for revenge. 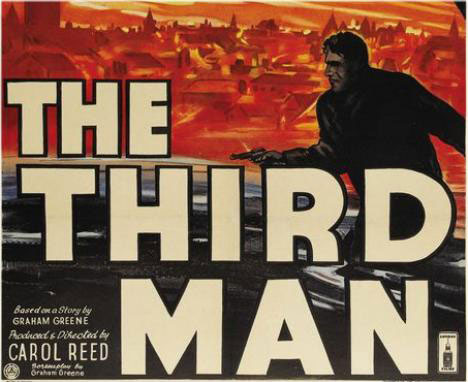 This classic Film Noir movie is set in the shadowy streets of post-war Vienna, a ruined city where nothing (and no-one) is quite what they seem. An American pulp-fiction writer (Joseph Cotton) arrives to discover that a friend of his, Harry Lime, has died under mysterious circumstances. Or has he ? The ensuing mystery entangles Cotton in his friend’s black-market dealings, with the multinational police, and with his mysterious Czech girlfriend. Demonstrating that a movie is always improved by memorable music the haunting ‘Harry Lime’ theme, played on the zither, sticks in the memory long after the end credits. 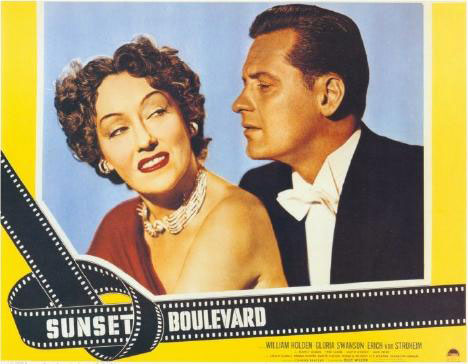 Down-on-his-luck Hollywood scriptwriter Joe Gillis (William Holden) takes on the job of writing a screenplay for forgotten silent movie actress Norma Desmond (Gloria Swanson). She is a former matinee idol, long past her former glories and living as a recluse in a ramshackle Hollywood mansion with her butler Max, who was once her director and husband. The penniless scriptwriter finds himself seduced into becoming her gigolo, has his moral integrity tested and found wanting in true Film Noir fashion, and is a witness and unwilling participant in her descent into murder and madness. 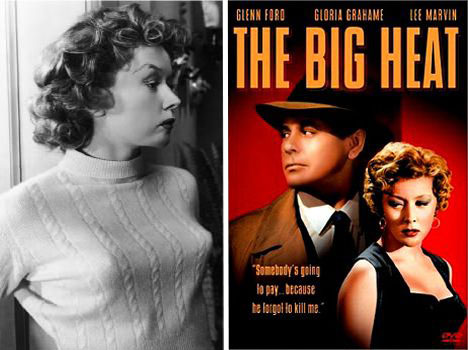 The ‘golden age’ of Film Noir was arguably the 1940s but there were still plenty of examples of the genre being made in the 1950s. In this film, detective Dave Bannion (Glenn Ford) is assigned to the routine investigation of a police sergeant’s suicide but when a ‘B-girl’ claiming to have evidence is found murdered, Bannion’s superiors order him off the case. Stubbornly Bannion pushes back at reputed mob boss Lagana, who fanatically keeps his home life free of “dirt.” The result is that a bomb meant for Bannion kills his wife, turning him into a vigilante bent on revenge at all costs and alone against a corrupt city except for Debby, the disfigured ex-mistress of a sadistic mobster. Love it or hate it, you’re not likely to come across many nice people in Film Noir.