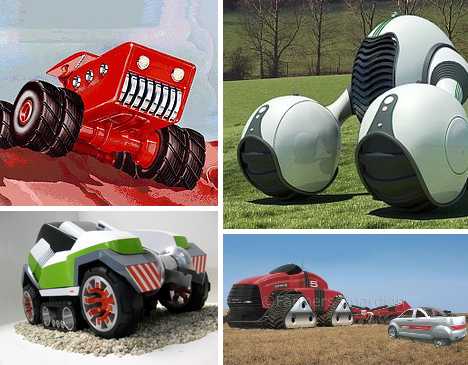 If you think tractors aren’t exciting, you’ve spent too much time on a collective farm and not enough on the showroom floor. These 10 cool & futuristic concept tractors may not break any speed records but when it comes to bringing the original “mechanical plow horse” up to speed, let’s just say they’re outstanding in their field! 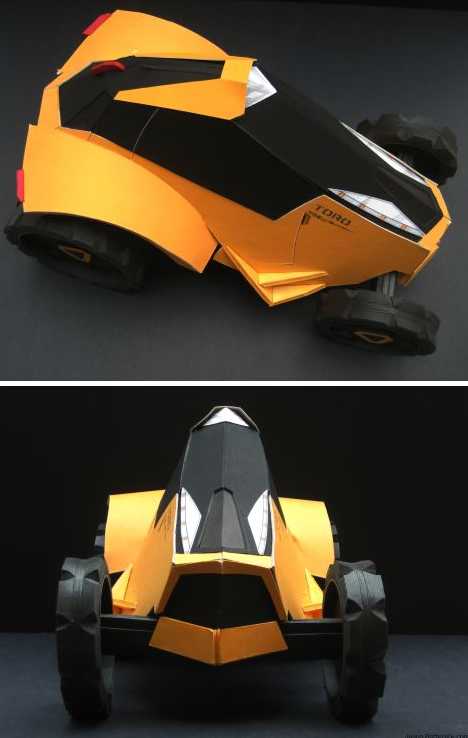 Before Lamborghini made supercars, it made superior tractors – true story! Now the Lamborghini Toro takes Ferruccio Lamborghini‘s exoticars back to their roots, in more ways than one. 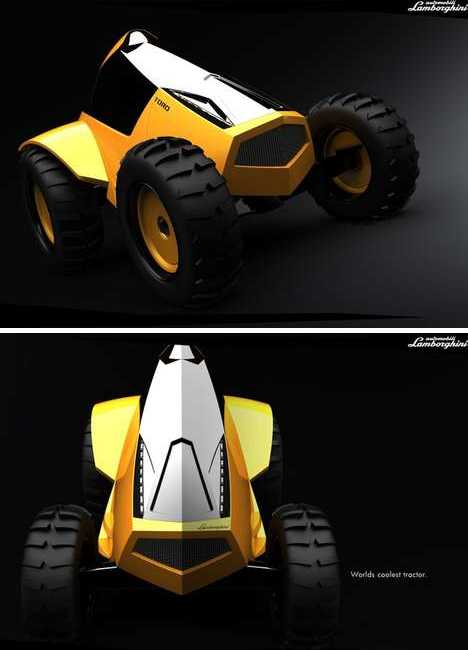 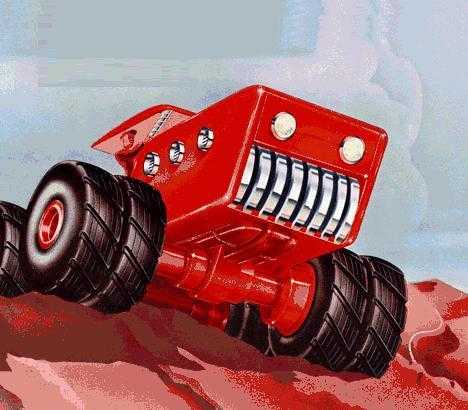 The big red machine above was conceived by futurist illustrator Arthur Radebaugh for the Bohn Aluminium and Brass Company. Though dubbed a 1947 model, Radebaugh actually penned the work in 1940. Save for the lack of a glassed-in cab to keep dust out, Radebaugh’s vision extends far beyond just 1947. 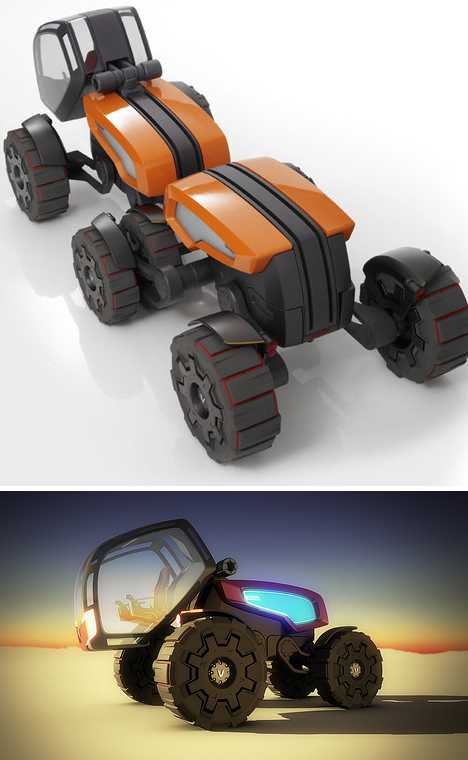 The Valtra ANTS Tractor concept was designed by Lighthaus of Sweden as a modular “tractor system” able to adapt to the varied needs of future farmers. 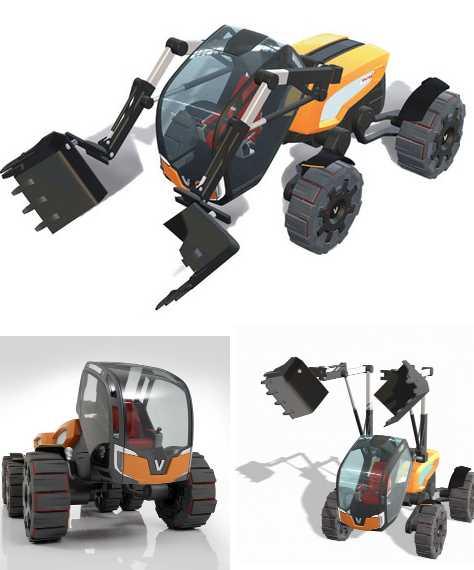 According to Valtra, “ANTS is strong, friendly, dynamic, agile and lightweight just like real ants.” Considering what a nest of actual ants can do, imagine the results farmers will get when an army of ANTS gets to work on the back 40! 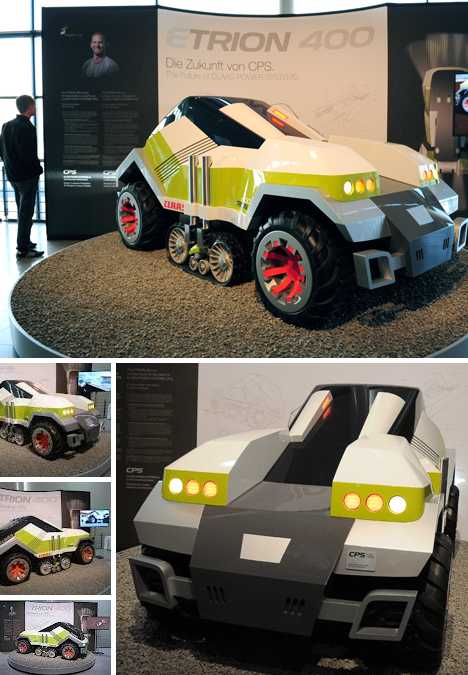 (images via: AGweb and Farmers Weekly)

Merlyn Gray of Merlyndesign envisioned the Class ETRION 400 Concept Tractor to do everything modern tractors do, but better. The design exploits the best features of wheeled and tracked tractors to enhance stability and reduce ground compaction. Most radical feature of all? The ETRION 400 is designed to be driverless. 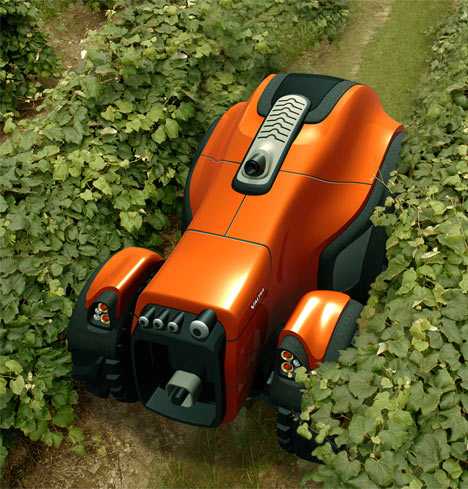 Tractor-maker Valtra has their fingers in more than a few pies, one of which being the RoboTrac Robotic Mini-Tractor concept by industrial designer Hannes Seeberg. Wireless internet connectivity and onboard GPS helps keep RoboTrac in the potato patch and out of the petunias. 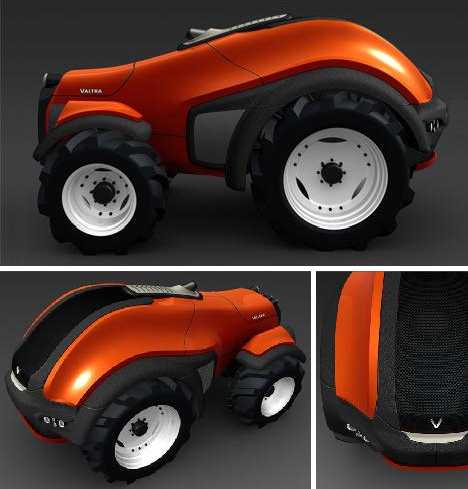 Powered by an 85 hp diesel engine and carrying a 200 liter fuel tank, RoboTrac can be customized on-site to suit the needs of the day. Switch between two- and four-wheel drive, switch out the wheels for larger ones, push the button and let RoboTrac loose among the cornstalks.

Case IH Tractor of the Future 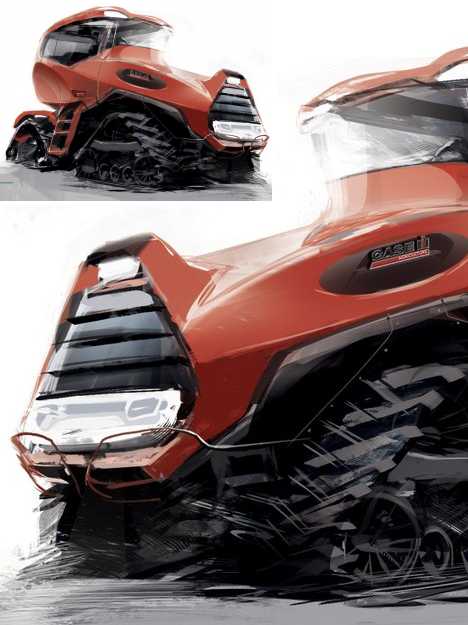 This impressive sketch of an un-named “Tractor of the Future” looks as if it were destined to be plowing fields of Red Weed on the dusty plains of Mars. Credit DeviantArtist Slime-Unit with conjuring up a future in which farmers are fully formidable! 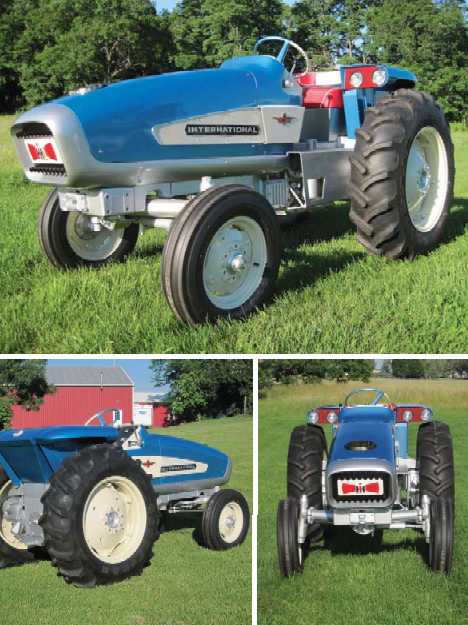 The HT-340 was a concept tractor that not only made the jump from blueprints to working prototype, it did it half a century ago! International Harvester endowed the sleek (as tractors go) blue & white machine with a hydrostatic gas turbine engine and displayed it at a number of farm-related events during the summer of 1961. 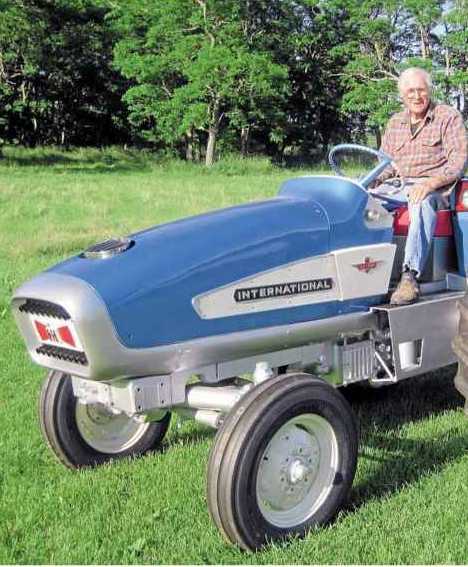 The tractor shown here is a faithful reproduction of the prototype HT-340 which now resides in the Smithsonian Institution. Brian Harris, a retired machine repairman at General Motors, installed a modern gas turbine engine that puts out 150 hp and runs at a blistering 60,000 rpm. 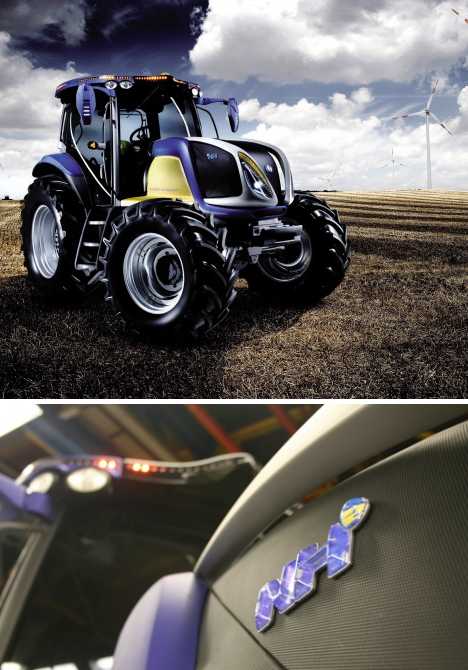 New Holland’s NH² concept tractor is powered by hydrogen but this is one concept that won’t go over like a lead zeppelin… if you know what I mean, and I think you do. The tractor’s “engine” is a bank of fuel cells that produce hydrogen gas. Stored under pressure in a small tank, the NH² runs silently and emits steam as its exhaust. 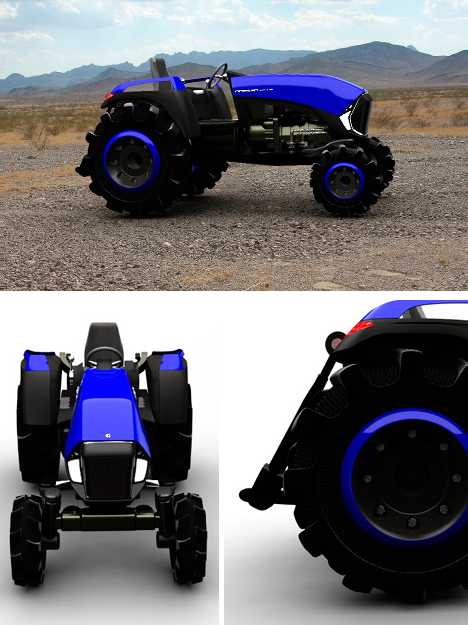 The Cosmic Trac is one tractor concept that could very easily see production sometime soon. Vipin George’s simple and straightforward design not only looks good, it’s intended to work well in real world use. 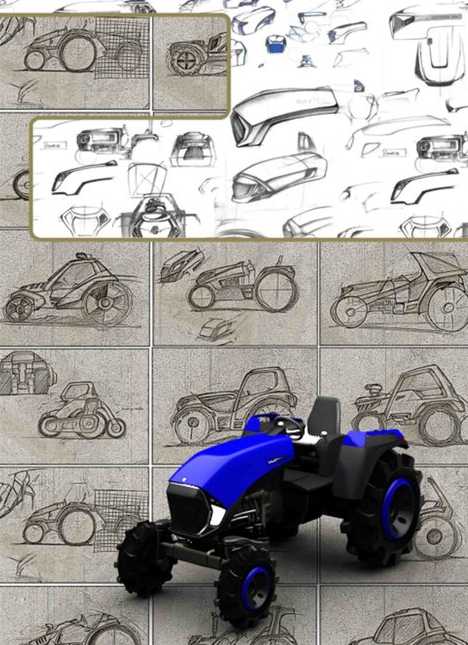 A single-sheet hood, fibre-reinforced plastic head light housings and a partially exposed engine for ease of accessibility make the Cosmic Trac an appealing prospect for farmers who’d rather work in their fields than work on their tractors. 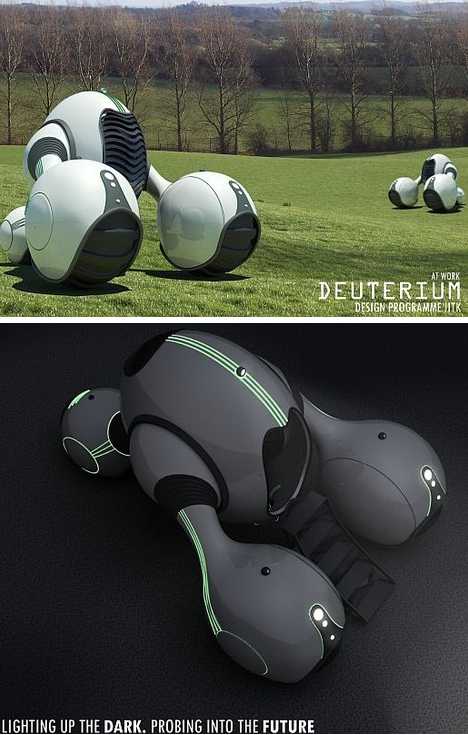 It’s tough to think of a more futuristic name than Deuterium, unless it’s Dilithium. Indeed, the Deuterium Multi-Dimensional Tractor would look perfectly natural roaming some M-class planet in the Delta Quadrant. 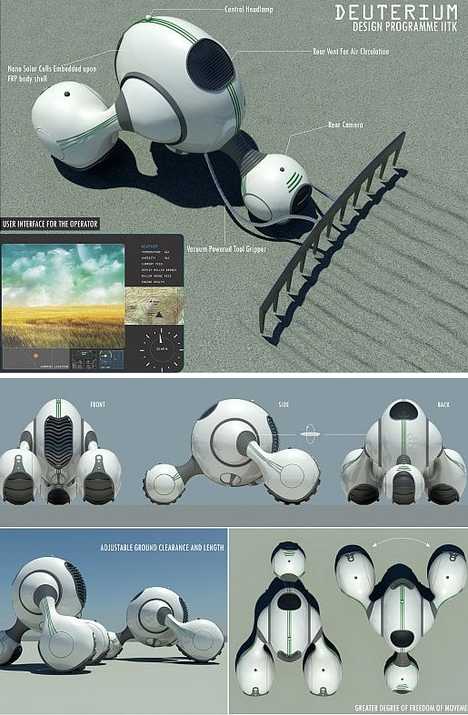 Designed by Prithu Paul in collaboration with Ankit Kumar, Deuterium is as high-tech on the inside as it looks on the outside. An onboard CPU, GPRS and sensor controlled motion path allocation add up to a futuristic farming vehicle that empowers tomorrow’s autonomous farmer. 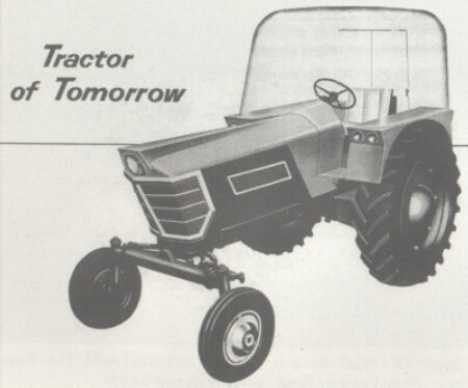 Tech prognosticators and assorted futurists love nothing better than announcing the “(blank) of Tomorrow”, though tomorrow never seems to come – I’m looking at you, flying cars. Tractors are a horsepower of a different color, however, and most of the concept designs thrown into the arena stand a better than average chance of reaching reality. You don’t have to be a farmer to get excited about that!