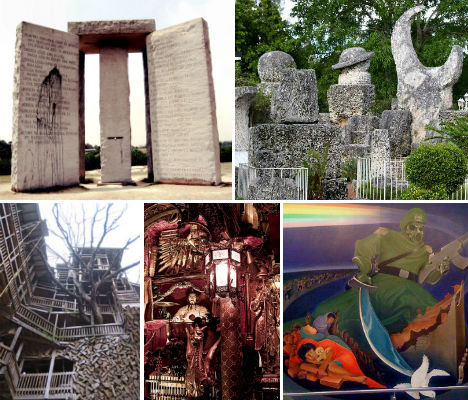 A stone monument with instructions for apocalypse survivors, lurking ominously in a field in rural Georgia.  A castle comprised of stones that each weigh several tons, built with stunning precision by a single man – using no heavy equipment. These and five more strange and dazzling attractions are scattered throughout America, inspiring conspiracy theories, head-scratching and a whole lot of open-mouthed awe. From unexplained archaeological sites to bizarre modern creations, all of these mysterious man-made wonders of America are awesomely weird. 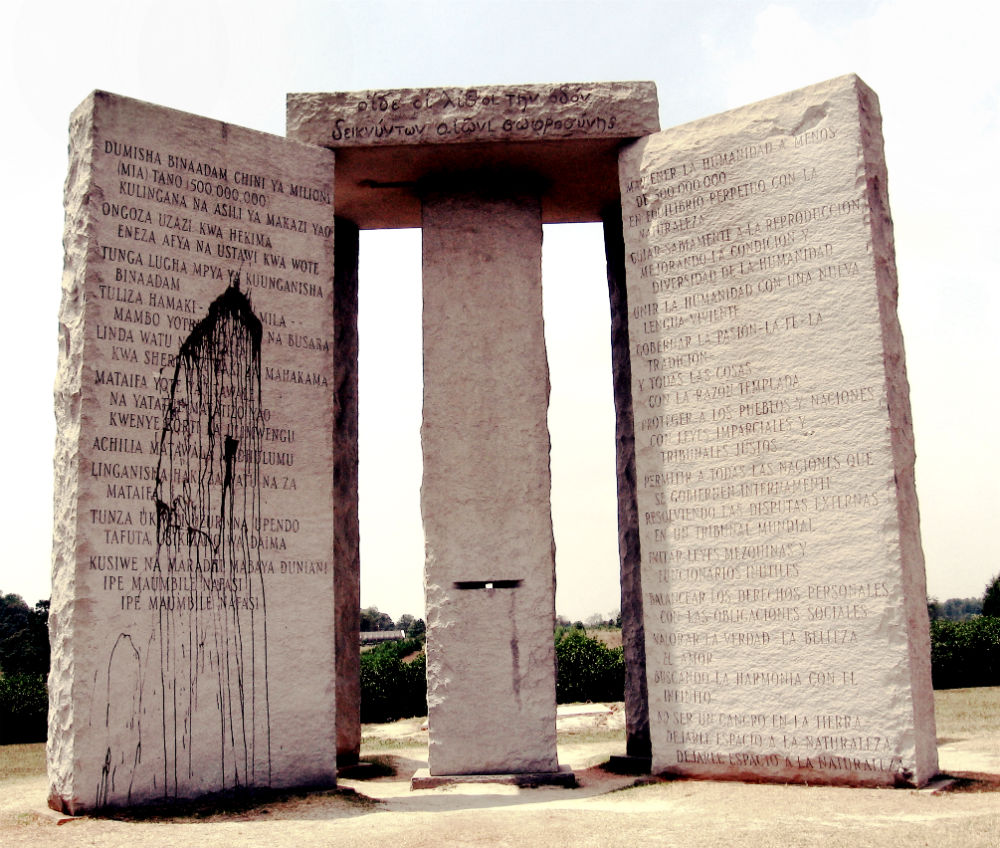 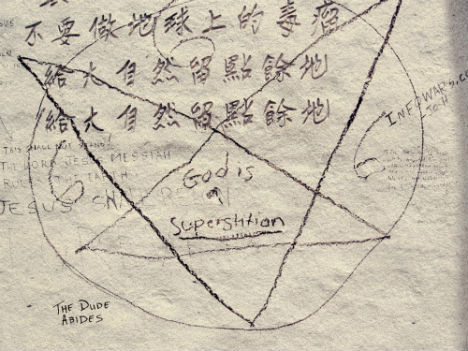 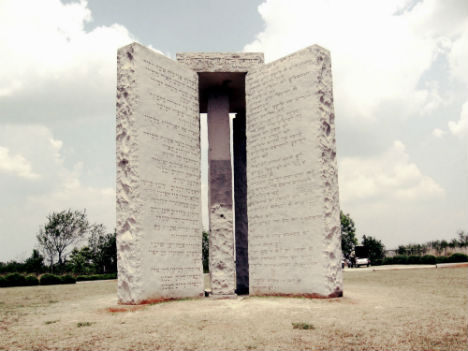 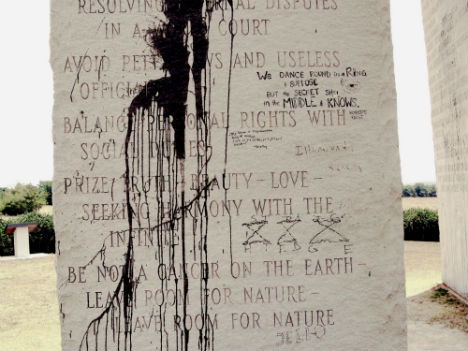 Deep in the rural countryside of northeast Georgia is a mysterious stone monument intended for survivors of an apocalypse. Designed and commissioned in the late 1970s and early ’80s by an organization that never identified itself, the Georgia Guidestones warn those who would attempt to rebuild civilization to do so with care – in eight languages, including Babylonian Phoenician, Ancient Greek and Egyptian hieroglyphics.

Why did they choose the unremarkable location of Elberton, Georgia? Why is the monument designed to track astronomical events like solstices? What is in the time capsule buried deep beneath the soil on the site? We may never know. The vaguely eugenic language of the monument and the strange circumstances of its creation have given rise to conspiracy theories involving everything from the New World Order to secret Satanic societies, with some speculating that a powerful international organization plans to decimate world population levels. The monument has been repeatedly vandalized, mostly with Christian-themed graffiti. The markings seen on these photos, taken in 2009, have since been removed. Get the whole story about the Guidestones at Wired. 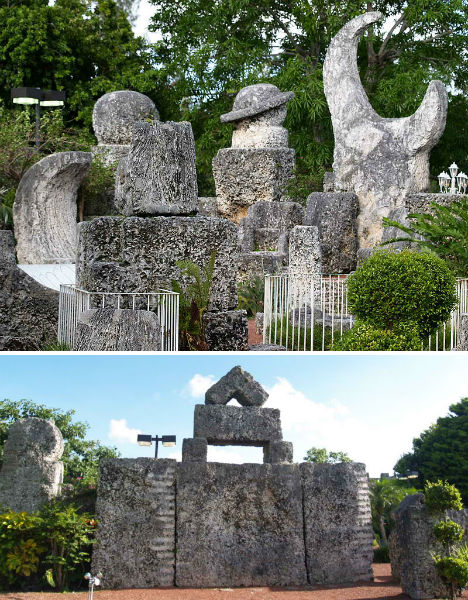 How is it possible that one man managed to move all of these massive hunks of sedimentary rock into a sprawling stone structure, all by himself? Latvian ‘eccentric’ Edward Leedskalnin spent over 28 years building the Coral Castle in Homestead, Florida, after he was jilted by his 16-year-old fiance. Leedskalnin originally built the castle in Florida City, which is the southernmost city in Florida that’s not on an island, but actually moved the whole thing 10 miles up the coast in 1936 to preserve his privacy. He worked on it until his death in 1951, and it’s now a public attraction.

Leedskalnin, who claimed that magnets helped to cure him of terminal tuberculosis, shifted each of the several-ton megalithic stones into place, carving some into shapes like moons and planets. Altogether, the castle consists of 1,000 tons of stone including walls, sculptures, furniture and a tower. The stones fit together with no mortar, using just their own weight to keep them together, and the craftsmanship is so precise that no light passes through the joints.  The entire collection of Leedskalnin’s creations survived a direct hit from Hurricane Andrew in 1992.

So how did he do it? A few local teenagers claimed that they watched him move the stones as if they were as light as helium balloons. Leedskalnin refused to reveal his methods, saying only that it was easy once you know how. He hinted that his methods were supernatural, stating that he had discovered “the secrets of the pyramids.” Experts believe that he used traditional methods like block and tackle, a system of pulleys.

The House on the Rock, Wisconsin 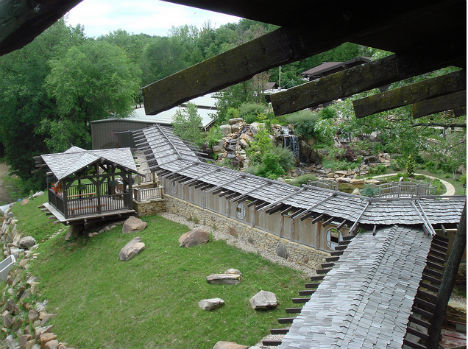 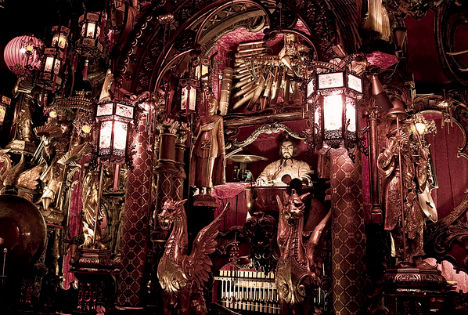 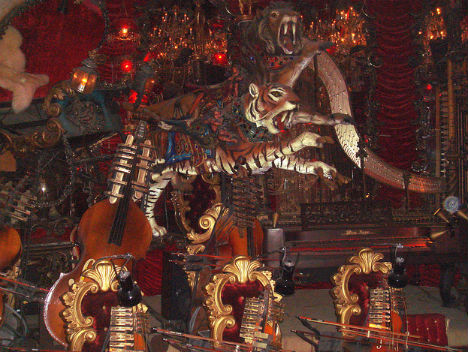 This might just be America’s most bizarre attraction. Absolutely jam-packed with crazy, The House on the Rock is a massive complex with dozens of themed rooms full of creepy dolls, statues, automated musical instruments, Christmas themed decor, and dusty, dilapidated knick-knacks of all kinds. Located north of Dodgeville, Wisconsin, the house and gardens were designed by Alex Jordan, Jr. beginning in 1923. As the story goes, Jordan drew out the plans for the first building, Villa Maria, and excitedly showed them to famed architect Frank Lloyd Wright, who replied “I wouldn’t hire you to design a cheese crate or a chicken coop.”

There’s doubt as to whether this story is true for various reasons, but it’s fun to imagine that Jordan took that as a challenge, producing a crazed complex combining beautiful gardens and interesting architecture with incredibly surreal interiors. The house sits on Deer Shelter Rock, a natural column that’s 60 feet tall, and features a cantilevered ‘Infinity Room’ with a glass cut-out in the floor, jutting out 218 feet into a ravine.

The House on the Rock is also home to the world’s largest indoor carousel, a 200-foot model of a fanciful sea creature, a huge collection of Santa Clause figures and many, many more exhibits. New attractions are still being added today.

The Underwater Pyramids of Wisconsin 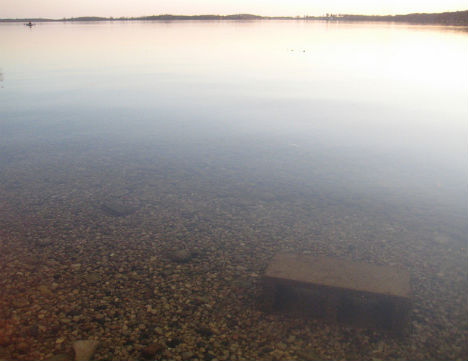 Conspiracy theorists will tell you that the lost pyramids of Rock Lake, Wisconsin are evidence of paranormal or extraterrestrial activity – some even calling it ‘Atlantis in Wisconsin’. Archaeologists will tell you that they’re the remains of Native American architecture that have since become submerged. Whether you’re in the former camp or the latter, these underwater structures are intriguing.

At least three pyramid-shaped structures are known to be on the bottom of Rock Lake, though nobody seems to have captured them clearly on camera, perhaps due to the murkiness of the water. It seems that the mounds may have been built by the Azatlan natives at a time when the water levels were lower, as there are similar mounds on dry land in nearby Azatlan State Park. Sonar scans in the 1980s allegedly showed a number of unusually shaped structures, and the water was clear and low enough in the 1990s to confirm that they were man-made. 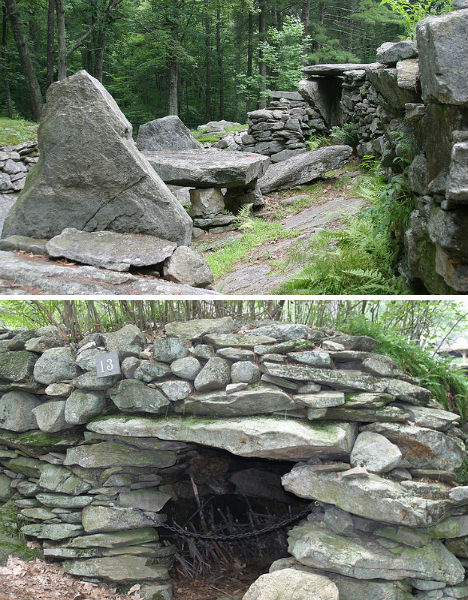 ‘Stonehenge’ is a bit of a misnomer for this site in New Hampshire, as it doesn’t consist of monoliths like the famous monument in England, but rather stacked stones. And it may not be quite as mysterious as its namesake, but it’s still pretty interesting. Nobody knows quite how this archaeological site might have been created, or when, or by whom. Theories range from the practical to the bizarre, from experimental land-use practices of farmers in the 18th and 19th centuries to ideas about pre-Columbian origins. Some of the rocks are arranged to match up with astronomical events like solstices.

Also known as ‘Mystery Hill’, America’s Stonehenge is currently open to the public as a free tourist attraction. The first notice of it appeared in a print of the 1907 History of Salem, New Hampshire, which referred to it as “Jonathan Pattee’s Cave. He had a house in these woods 70 years ago; took town paupers before the town farm was bought. This is a wild but beautiful spot, among rough boulders and soft pines, about which the most weird and fantastic tale might be woven. There are several caves still intact, which the owner used for storage purposes.”

William Goodwin, who purchased the property in 1937, was convinced that there was a much stranger explanation for the stones. He believed they were proof that Irish monks lived there long before Christopher Columbus arrived in what would become America. Others see similarities to Phoenician architecture. Carbon dating has been unable to distinguish between possible Native American activity in the area, and the activities of the farmers.

H.P. Lovecraft visited ‘Mystery Hill’ in the 1920s or ’30s, and used it as inspiration for his story “The Dunwich Horror.” 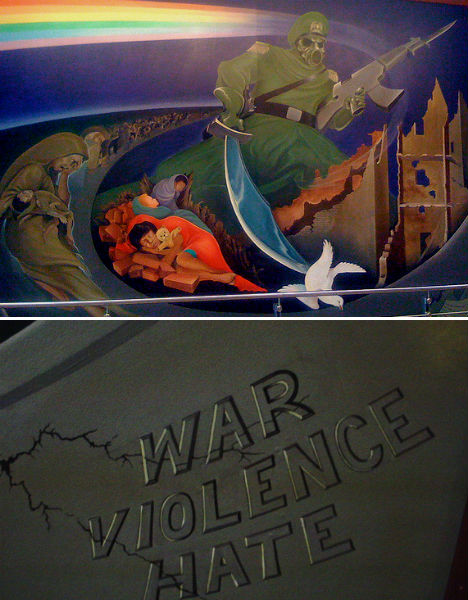 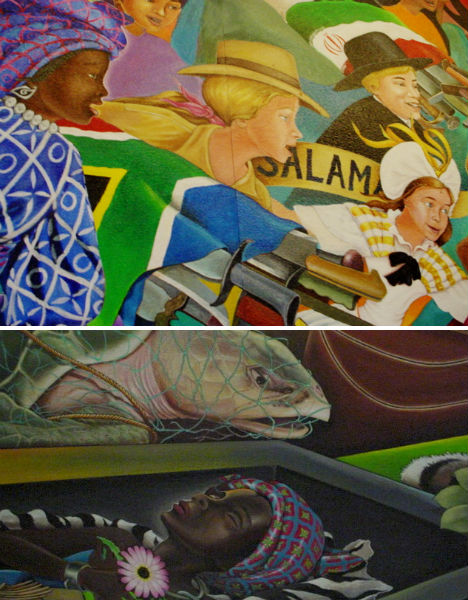 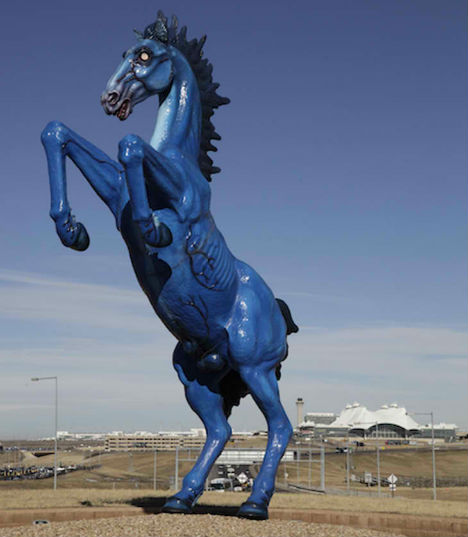 Nearly every airport has murals, statues and plaques, but most of us are too harried to take a good look. The next time you pass through Denver International Airport in Colorado, you’re going to want to lean in and examine some of the things that are painted on the walls. They’re downright bizarre – and some might even say they’re frightening.

Why, for example, does one of the murals depict a gas-mask-wearing, gun-wielding Nazi soldier looming against a destroyed landscape, surrounded by grieving women holding apparently dead children? The soldier’s sword is even piercing a dove, the symbol of peace. In the midst of a utopian-looking scene with people from various nations are the ends of swords and other weapons partially covered in flags. Another mural shows dead kids in coffins. It’s not hard to see why some people find them disturbing enough to weave fantastical explanations involving the Illuminati and an intentional reduction in world population levels.

And it’s impossible to miss another strange piece of art at this airport: the giant blue horse statue that rears up on its hind legs on the roadway approach to the terminal. Dubbed ‘Blue Mustang’, the sculpture inspired reactions of shock and horror when it was unveiled in 2008. The 32-foot-tall horse has demonic-looking red eyes and creepy black veins all over its body. This statue actually killed its creator, Luis Jiminez, when a portion came loose and hit him while he was working on it.

Furthermore, the runways are shaped like a swastika, and a Masonic capstone mentions the ‘New World Airport Commission’, an organization that doesn’t seem to exist. It’s certainly enough to make one wonder just what the designers of the airport and its decorations were thinking. 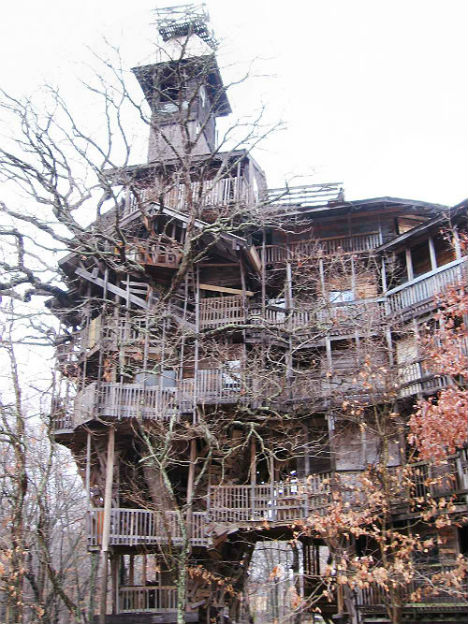 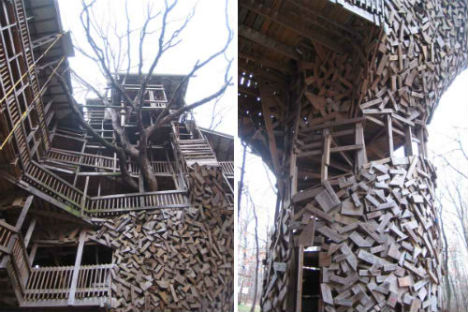 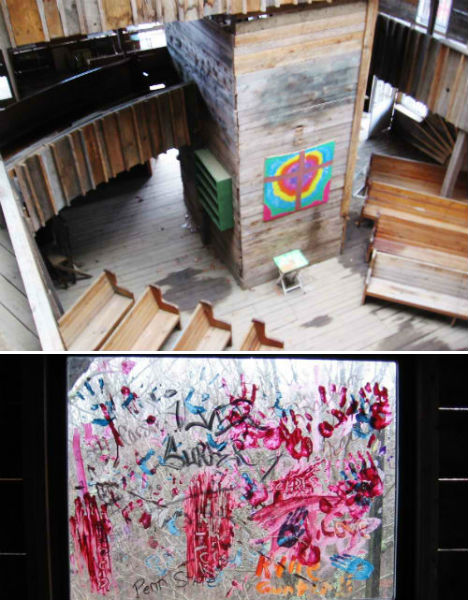 Said to be the world’s tallest treehouse at 97 feet in height, Minister Horace Burgess’ sprawling creation in Crossville, Tennessee is quite a sight to behold. Scraps of wood are nailed on with seemingly no rhyme or reason, overlapping in chaotic explosions of lumber.  From the ground you can glimpse the pinnacle, topped with a spiky parapet, above the very highest branches of the oaks that are nearly swallowed by the structure. A 12-foot-diameter, 80-foot-oak serves as the main support, with six additional trees included as well.

The treehouse was made almost entirely from salvaged scrap materials by Burgess himself – acting, he says, on the will of god. “I built it for everybody,” he told USA Today. “I was praying one day, and the Lord said, ‘If you build me a treehouse,  I’ll see that you never run out of material.'”

Clearly, running out of material has never been a problem. Burgess is in his 19th year of working on the treehouse, and continues to nail wood onto it today. The treehouse has ten floors and features a sanctuary with pews, an altar and a podium. The sanctuary is also used as a basketball court. Stained glass windows, paintings and various odd art installations litter the maze-like interior along with graffiti, dirty mattresses and other signs of habitation. Burgess sometimes allows homeless people to take shelter inside.